This post highlights the similarities and differences between vCenter Server for Windows and vCenter Server Appliance (vCSA) for both vSphere 6.0 and 6.5. I’ll also touch briefly on the features common to both and those exclusive to vCSA 6.5 as well as the pros and cons of going for a specific version.

The most glaring difference, as implied by its name, is that vCenter Server for Windows runs exclusively on a Microsoft Windows server operating system. My article shows you how to install it. The appliance version (vCSA), on the other hand, is based on SUSE Linux Enterprise Server 64-bit and comes as an OVF appliance lock, stock and barrel ready for use. I covered the installation of vCSA 6.0 here and vCSA 6.5 here.

There’s a difference in terms of the database options available when installing vCenter Server especially in terms of scalability. This equally applies to both vSphere versions 6.0 and 6.5.

If you have vCenter Server for Windows deployed, you probably know that VUM can be installed on the same server as vCenter. The same is not true for vCSA 6.0 as a separate Windows box is required if you want VUM deployed to your environment. My prediction is that VUM will be embedded in vCSA a couple of vSphere updates down the line. If not, it will be addressed in the next major release of vSphere.

IMPORTANT UPDATE: As predicted, VUM is now embedded in vCSA 6.5! You no longer need to install a separate Windows box.

Both flavors of vCenter 6.0 can be managed using the thick (C#) client or the vSphere Web Client. Note, however, that you can no longer manage vCenter Server 6.5 using the thick client.

With the appliance version (vCSA), you can also SSH or use the Direct Console User Interface (DCUI) for administration purposes. Additionally, if you upgraded to vCenter 6.0 Update 1, you can use the HTML 5 based client instead of vSphere Web client. However, bare in mind that it does not provide all the latter’s client functionality.

Also available since vCenter 6.0 Update 1, the Appliance Management client (https://<vCSA IP address or host name>:5480) can be used to configure settings related to networking, access and more. One pretty nifty feature is the ability to patch or upgrade the appliance via ISO or URL based patching as shown in Fig. 2.

In the past, vCSA presented some serious scalability issues that held it back from being deployed to production environments. With vSphere 6.0, both vCenter Server versions enjoy the same set of scalability metrics and features as listed in Fig. 3 kindly reproduced from the What’s New in the VMware vSphere 6.0 Platform whitepaper. 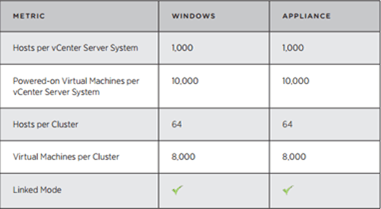 This is no longer the case with vSphere 6.5 which is set to be a game changer in terms of which version of vCenter Server to deploy. Simply put, vCSA 6.5 is superior in terms of the features offered and is the VMware recommended way forward.

As I just mentioned, vCSA 6.5 offers features not available in vCenter Server for Windows 6.5. I cover these features in my Say Hello to vSphere 6.5 post. To reiterate, here are the main ones. I’ve also included links to posts I’ve written on each.

Deciding on the flavor of vCenter to go for!

Verdict: I would personally go for vCSA 6.5 not only because it is recommended by VMware but also because of the extra features offered. If you’re Linux shy or the type who’d rather wait for one or two major updates before taking the plunge, then stick with vCenter Server for Windows 6.0. You can always use the migration tool to move to vCSA 6.5 at a later stage should you change your mind.

The bottom line is that VMware are moving towards relegating vCenter Server for Windows to the history books of virtualization. This is evident since the release of vSphere 6.0 with both vCenter flavors having identical feature parity and, lately, vSphere 6.5 with vCSA taking the lead. It’s only natural to assume then, it’s only a matter of time before VMware drops the vCenter Windows version altogether.

Finally, here are a few more links if you wish to dive in deeper.

25 thoughts on "vCenter Server for Windows and vCSA compared"