How to deploy a vCenter HA cluster – Part 1

For quite some time, we’d been praying for a vCenter Server high availability (HA) solution worthy of its name. Finally, the VMware god has obliged and granted us the gift of native HA. True HA is now embedded in vCenter Server Appliance. The only catch is that HA is only available for vCSA 6.5. No such thing for the Windows vCenter version.

A robust native HA solution was way long due more so as VMware keeps pushing the envelope with products such as vSAN and NSX which are highly dependent on a resilient vCenter Server infrastructure. Prior to vSphere 6.5, Microsoft Clustering or vSphere Fault Tolerance were two of the methods used to deploy vCenter in an HA fashion but the full spectrum of HA requirements was rarely met. For instance MS Clustering works great for vCenter for Windows, not so much for vCSA. VMware Fault Tolerance is an improvement but it does not protect against application failure. With vSphere 6.5, these kinks have been ironed out for good.

In part 1 of the series, I’ll demonstrate how easy it is to set up a vCenter HA cluster using the first of two deployment options. The second but shorter post, will cover the second deployment option which needs a little bit more elbow grease put in.

An overview of the Architecture

To set up a vCenter HA cluster, we being by installing vCSA as we’d normally do. One of the requirements is to have a second network card connected to the HA or cluster private network. The inclusion of a second nic is taken care of automatically when selecting the Basic deployment option; see further down. The HA network is simply a portgroup created on ESXi.

VMware recommends placing each HA node on its own ESXi host. The hosts in turn, should be in a DRS cluster though the requirement is optional. In practice, this means you would need 3 ESXi hosts at a minimum. Also note that the HA portgroup must be created on every ESXi hosting an HA node.

After the Active node is configured, the Passive and the Witness nodes are cloned off of it. The cloning process can be either automated or done manually, depending on the deployment mode selected; Basic or Advanced.

In today’s post, I’ll be writing about the Basic option which does most of the donkey work for you.

Figure 1 illustrates a typical vCenter HA cluster architecture. The Active node has two allocated IP addresses, 192.168.16.50 which is the management address and 172.168.0.1 , the HA network address. Note that while the HA network can be routable, you should not add a gateway address when configuring the second network card on the vCSA. 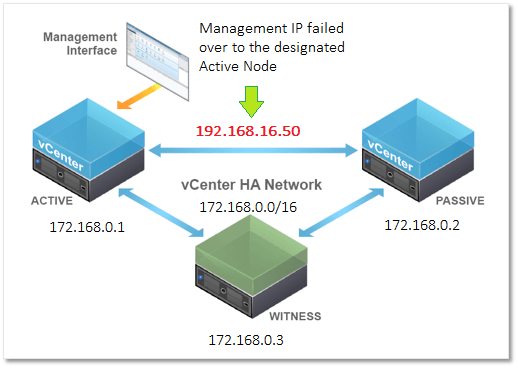 In the event of an Active node failure, the Passive node takes over and becomes the Active node. The management IP address is carried over to the newly designated Active node.

There are a number of software and hardware requirements you must take core of, these being:

The great thing about vCSA HA, as with many other features, is the ease with which it can be set up in a test lab. In fact, a single ESXi host will suffice but as always make sure to follow the product literature to the letter when deploying to a production environment.

At the moment I do not have a dedicated physical ESXi host for testing so, instead, I deployed a beefed up nested ESXi 6.5 host sporting 4 vCPUs, 32 GB of RAM and 500 GB of storage space. Anyway, after installing and configuring the nested ESXi host, the first thing I did was to create the HA portgroup.

Creating the HA Network on ESXi

This is easily accomplished using the ESXi host management UI (https://<ESXi FQDN or IP Address>/ui). Log in as root and select Networking from Navigator as in Figure 2.

Click on Add port group and type in the port group name (HA in this case). Next, select the vSwitch where you want the port group created or just create a new one. Since we will be hosting the vCenter HA nodes on nested ESXi, we must enable Promiscuous mode on the vSwitch to allow inbound and outbound traffic to the rest of the world. 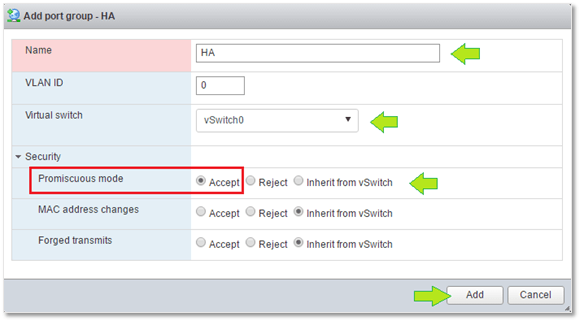 Note: Promiscuous mode must only be enabled on nested environments such as the one I’m using. It is not an vCSA HA requirement.

To install the first node, follow the procedure outlined in my post titled Installing vCSA 6.5 from scratch.

There’s one important step to carry out before moving on. I need to have the vCSA just installed manage the ESXi host where it resides. This setup is called a self-managed vCenter Server and is a requirement for configuring vCenter HA with the Basic option.  Alternatively, the vCSA can be managed by vCenter Server as long as both share the same single sign-on domain.

If you omit this requirement, you won’t be able to set up HA using the Basic option. As I learned first hand, the installer simply throws an error at you telling you that it was unable to locate the vCSA in the inventory.

The procedure to setup vCenter High Availability is dead simple.

First, point your browser to https://<vcenter FQDN or IP address>/vsphere-client and log in as [email protected].

In my test setup, I created a DC called HA and placed the nested ESXi host under it. The vCSA can be seen listed in Figure 4 as vc65-ha-1.

Next are the actual steps that will create the HA cluster for us.

1 – Using the vSphere Web Client, highlight the vCenter Server name in Navigator and select the Configure tab. Under Settings, select vCenter HA and click on the Configure button.

2 – Select the Basic option and press Next. 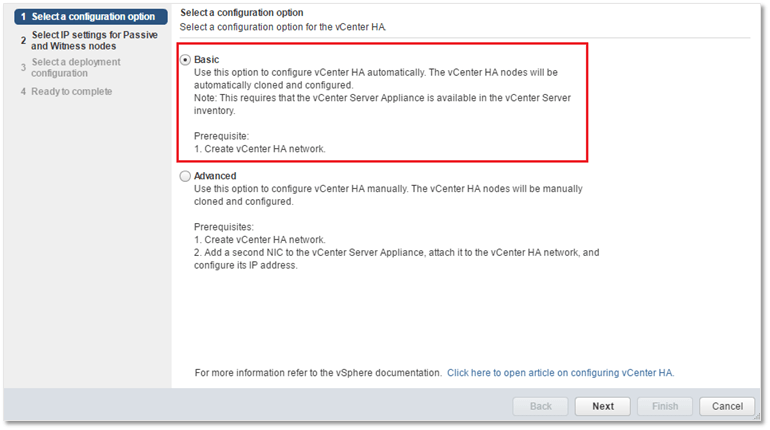 3 – Type in the private HA IP addresses for both the Passive and Witness node. Optionally, you can customize IP addressing for all nodes using the Advanced button. Press Next.

4 – Here you can review the nodes configuration and affect any changes if needed. Press Next. 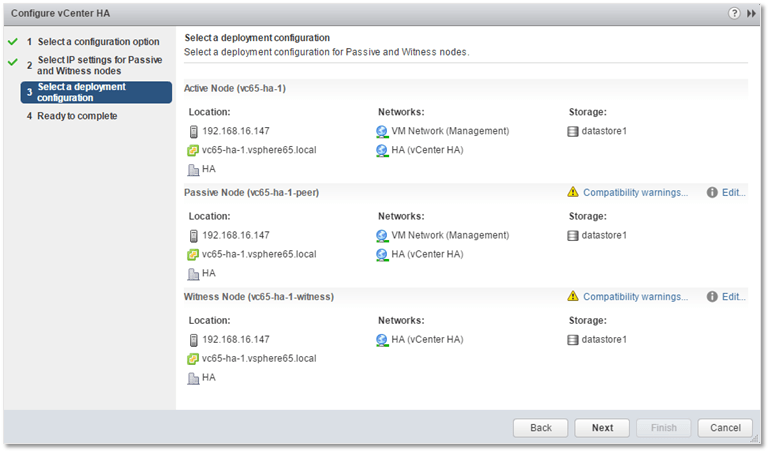 As you can see, I’m getting a load of warnings on account of deploying to a single host and datastore.

5 – Press Finish to kick off the HA cluster creation process. 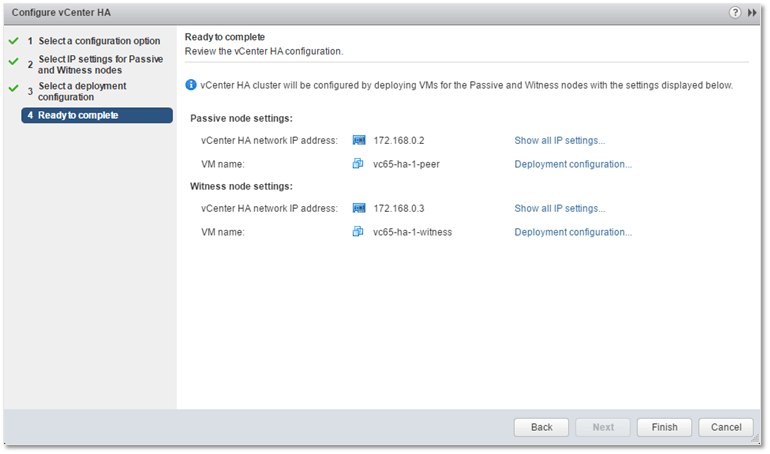 As already mentioned, the Basic option automates the cloning process for you. The first vCSA clone created is the Passive node immediately followed by the Witness node. As per Fig. 11a, the -peer and -witness suffixes are appended to the Passive and Witness node VM names respectively. If the cluster creation process completes successfully, you should hopefully get an Up status for all three nodes.

Clicking on the vCenter HA Monitoring link will give you further details about the health of the HA cluster (Fig. 11b).

Of course, the whole point of having an HA cluster is to have the Active node failover automatically when trouble ensues. In fact this is the default behavior however you still have some level of control over the failover process. Clicking on the Edit button (Fig. 11a) allows you to do several things. Enable vCenter HA is the default setting as mentioned. Maintenance mode disables automatic failover however replication keeps on working. If you want to disable both failover and replication but keep the HA configuration intact, select the Disable vCenter HA option. And finally, if you’re having a bad day, go ahead and destroy the cluster altogether by selecting Remove vCenter HA. 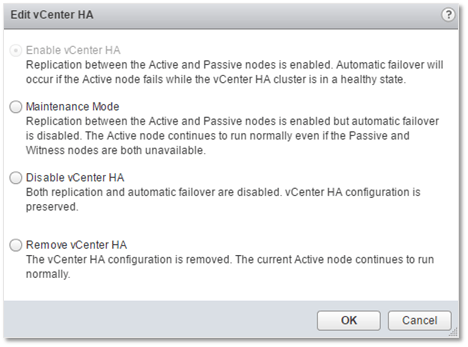 When automatic failover is disabled, a manual failover may be carried out via the Initiate Failover button (Fig. 11a). I tested this out in my lab and it took vCenter approximately 2-3 minutes to come back online, which I think is a tad bit slow. All things considered, I’m running everything on nested ESXi, not the ideal of scenarios but I’m still curious as to what the response times would be when using proper hardware. The documentation doesn’t really give hints as to what this should be.

Edit: The RTO is of 5 minutes as confirmed by VMware but will be improved on in the future.

In truth, the warning from Fig. 13 does say several minutes but I still think that service resumption time should be measured in seconds not minutes. 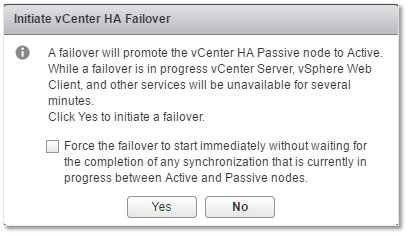 It did take a while before the passive node took over. The failover progress can be viewed in a browser if you try to access the vCSA using the web client. 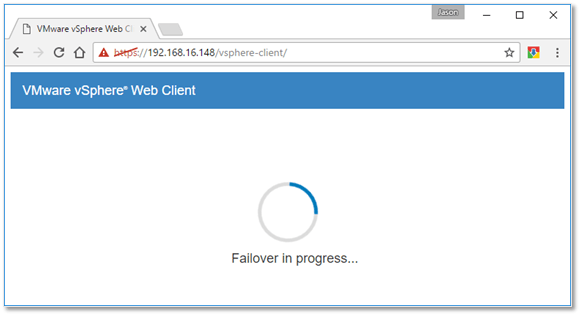 Looking at Figure 15, you’ll probably notice that what was previously the Passive node has now changed over to being the Active node. Notice also that the management IP – 192.168.16.148 – failed over as well but the HA address – 172.168.0.2 – remained the same which is how things are supposed to work. 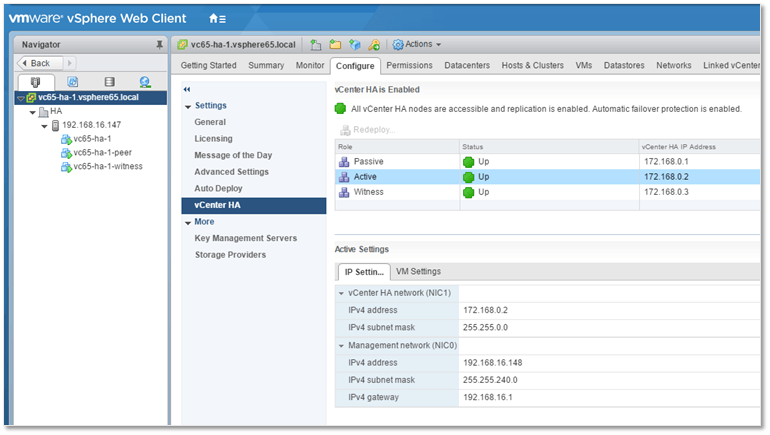 Here are a few tips, gotchas and links I came across while writing this article which you’ll probably find useful.

If you’re deploying the HA cluster to a DRS enabled vSphere cluster with less than 3 hosts, you will run into issues with the cloning process. The obvious solution is to use a minimum of three ESXi hosts and/or avoid deploying the HA cluster to a DRS cluster. Another option is described in this article which works around the issue by changing the config.vpxd.vcha.drsAntiAffinity vCenter advanced setting to false. Again, this is only applicable to testing scenarios. You can also go in and disable the affinity rule the installer creates after it fails the first time round.

If you get the following error “The operation is not allowed in the current state. vCenter HA does not support an Active node having disks on more than one datastore“, make sure that the vCSA being cloned does not have any snapshots and that the VM’s DVD setting is set to Client Device.

Cloning a vCSA which has been restored from backup, may result in the error shown below. This is precisely what I ended up with when I cloned an existing vCSA which I had restored at some point or another . I haven’t found any workaround for this, so my advice would be to always start with a freshly installed vCSA when setting up an HA cluster.

More troubleshooting tips can be found on the vSphere 6.5 documentation site.

If you are deploying an HA cluster with an external Platform Service Controller (PSC), you will need at least two PSC instances behind a load balancer. Further information is available here. 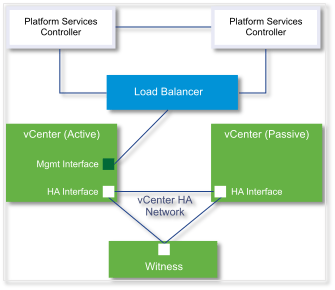 When taking backups, avoid backing up the Passive and Witness nodes. Just take a backup of the Active node. When restoring an Active node, you must remove all the cluster configuration, restore and re-create the HA cluster.

In this first part of the series, we’ve seen how the Basic HA deployment option allows you to easily and quickly deploy a 3-node vCenter HA cluster consisting of an Active, Passive and Witness vCSA 6.5 nodes. HA was a much needed addition in terms of complementing existing HA strategies given that, as time progresses, more and more VMware products and features have come to rely and expect 99.999% vCenter Server availability.

In part 2, we’ll see how the Advanced HA deployment option is similarly used to create a vCenter HA cluster.