How to install vCenter Server Appliance 6.0

In today’s article, I will take you through the process of installing the latest version of vCenter Server Appliance (vCSA), 6.0 U1.

The alternative to deploying vCenter Server for Windows comes under the guise of vCenter Server Appliance (vCSA), an optimized and preconfigured SUSE Linux Enterprise Server appliance. This deployment model reflects VMware’s stance with respect to virtualizing vCenter Server instead of going physical

Having said that, there are many schools of thought out there advocating for running vCenter Server on a physical box. Admittedly, I too used to have some reservations about virtualizing vCenter on the lines of “why risk virtualizing the one thing managing my virtual environment?”. Thankfully, I have yet to stumble across an instance where I regret virtualizing vCenter save , perhaps, for the day went it all went south due to a storage outage. This left me with an unresponsive vCenter VM and the only major annoyance was the time spent trying to locate the vCenter VM on some 30 hosts and fix it

Needless to say, a dedicated management cluster soon followed. This type of setup mitigates most of the issues associated with virtualizing vCenter, and other critical components. The idea is to decouple the management cluster from the primary networked storage, say by deploying VSAN, so VMs like vCenter are running on one or more dedicated hosts as well as storage. In the event that your networked storage decides to take a holiday, your vCenter Server would still be accessible which makes all the difference in the world when you’re trying to resume normal operations after an outage.

Why should I go for it?

HA, load-balancing via DRS, and improved backup are some of the advantages that spring to mind when choosing to virtualize vCenter. vCSA further adds to these benefits in a number of ways. It’s easier and quicker to deploy vCenter since the appliance is readily configured. There is no need to install and set up a dedicated Windows box; true, you can deploy from a template but you still must patch and configure, join the VM to an AD domain (optional), and all the extra steps in between. On the licensing front, you have two less Microsoft licenses to worry about; Windows and SQL.

Are there any limitations with vCSA?

Starting with vSphere 6, VMware have finally brought vCSA up to par with vCenter Server for Windows in terms of functionality. Previous releases suffered from some serious limitations making the adoption of vCSA a hard sell. There are a few remaining gotchas you must be aware of though. One major hiccup, is that you cannot run VUM (Update Manager) on the same server running vSCA. This means that you still need a Windows box where to install VUM. On the database front, the options are also limited to the embedded PostgreSQL database which supports up to 1000 hosts and 10000 virtual machines, or an external Oracle DBMS. If you’re a Microsoft-only shop, assess first whether you’d be better off running vCenter Server for Windows more so if covered by a Microsoft volume licensing agreement.

If Linux is not your cup of tea, managing and troubleshooting vSCA might turn out to be a tad more difficult than its Windows counterpart. This is something else to factor in before jumping on the vCSA bandwagon.

Make sure to visit here for a complete list of vCenter Server maximums or limits.

Enough with the chit-chat. Let’s dig in and start installing. We first need to take care of a few prerequisites which include;

The full requirements are available here.

Prior to vSphere 6.0, vCSA came packaged as an OVA that was deployed using the Deploy OVF Template from the vSphere client. This is no longer the case as vCSA now comes packaged as an ISO. Follow the steps below to kick of the installation process.

Personally, I fail to see the advantage of packaging an OVA inside an ISO. In fact, as it turns out, you can extract the OVA from the ISO image and deploy it similarly to how you would have done it with previous versions of vCSA. This article explains how.

Important: With FireFox, I ran into an issue where the installer fails to connect to the ESXi host where vCSA is being installed. The following procedure has been carried out using the Chrome browser.

Once you’re done installing the client integration plugin and clicked Install, you are presented with a series of screens. These are all self-explanatory.  Here they are listed in sequential order.

Figure 4 – Powering up the vCSA for the first time

Figure 5 – Boot up sequence from console

Interestingly, vCSA sports a similar Direct Console User Interface (Fig. 9) to that found on ESXi save for the color scheme. 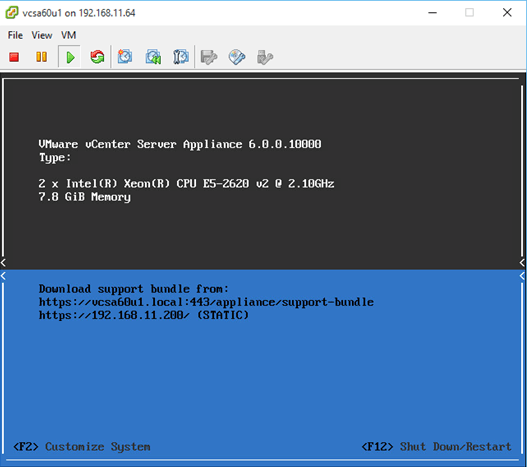 You should now be able to connect to vCSA using the thick C# client or the vSphere Web client.

7 thoughts on "How to install vCenter Server Appliance 6.0"