Finally, the latest incarnation of the vSphere platform was announced this October at European VMworld event held in Barcelona.

Without further ado, let’s go over the salient features and improvements you’ll find in vSphere 6.5. To start with, vCenter Server Appliance 6.5 (vCSA) seems to be running on steroids given the major additions now gracing it. Some nifty features have also been added to VSAN and to storage in general. The security department has been given a much needed overhaul and indeed, VM and vMotion encryption is now available right out of the box.

At the time of writing, vSphere 6.5 is not available for download so this post is mainly a summary of the information gathered from some prominent blogs and VMware site. Credit goes to all the authors whose links you’ll find listed at the bottom.

Update: Roll on a year or so later and vSphere 6.5 Update 1 is now available. You can read about it here.

Some very interesting and new vCSA features make 6.5 one of the most worth-waiting-for releases to date in my opinion. Drooling over the list of goodies, it is glaring obvious that VMware’s plans for vCenter Server for Windows is to lay it to rest for good. I dare guess that with vSphere 7.0 released, the Windows version will be no more.

Regardless, here’s a rundown of what’s new in vCSA 6.5.

There are a few HA options available for vCenter Server. Some of these include Fault Tolerance where the vCenter Server VM is replicated to another VM. Watchdog protection is enabled by default as is the ability to deploy vCenter on a 2-node Microsoft cluster.

With vSphere 6.5, VMware raises the bar even higher. The good news is that HA is now natively supported on vCSA. Note, however, that the option is not available on the Windows version. From what I understood, there are 2 deployment options, Basic and Advanced. The basic option is all wizard driven. Advanced, on the other hand, requires manual cloning of an instance of VCSA 6.5 which you’ll then use to set up a vCenter Server Active-Passive cluster. The good thing about the Advanced deployment option is that nodes participating in the vCenter cluster can reside in disparate physical data centers or sites. The cluster must include a witness node which is an appliance in itself but with a smaller resource footprint; 1GB RAM and one vCPU. Failover kicks in whenever the entire node or a number of key services fail. Again, I have yet to try this out but on paper it looks fantastic.

Update: Following this post, I’ve written a two-part series showing how to set up Native HA which you can read here and here.

Prayer, it seems, does work after all. VUM, has finally been embedded in vCSA which means that you will not be needing a separate Windows box running VUM. Time to party!

Yet another feature that warrants a big round of applause. In-built backup and restore functionality is now native to vCSA. Using VAMI or API, the following items can be now be backed up, using streaming protocols such as SCP, to a supported storage device; PSC, VCSA, VUM and Auto Deploy.

Update: Here a follow-up article describing one such method.

The HTML5 based client UI which I wrote about here, is now officially included with vCenter Server 6.5. The bad news is that it is nowhere up to par with the vSphere Web client in terms of features and functionality offered. This means we’re still stuck with the Flash-based client in the short term. On an equally discordant note, the C# thick client is now officially dead except that you can still connect to ESXi 6.5 but not to vCenter Server 6.5. This should not come as a surprise as we all saw this one coming.

The silver lining is that the vSphere Web Client has been revamped to offer better performance, a live refresh and an overall improved layout. Still, from a marketing standpoint, I can’t understand the logic of introducing a semi-baked feature. My guess is that the release dates were not met and VMware decided to compromise.

Little has changed as far as the remaining management tools are concerned. The embedded ESXi Host and Appliance Management tools remain unchanged except that the latter exposes additional statistics and health information compared to previous versions.

Using content libraries, you will now be able to mount ISOs on VMs stored in the library as well as being able to carry out guest OS customization. I had included both in my wish list here.

Last but not least, the client integration plug-in has been finally dropped. Thanks for that!

A revamped installer now includes the much coveted migration tool. Although recently released, the tool has nevertheless been improved to cater for a number of migrations paths including vCenter for Windows v5.5 and 6.0 to vCSA 6.5. Apart from being accessible from the vCSA installer, you also get to fine tune what actually gets migrated, VUM baselines and updates included. 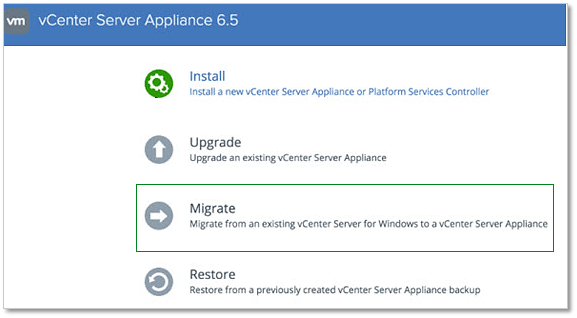 Another novelty is that vCSA now runs on Photon OS as opposed to SUSE Enterprise Server. One great feature of this new OS is the ability to run and deploy containers such as Docker and vSphere Integrated Containers (VIC).

Here’s a summary of what you’ll find included in vSphere 6.5.

Nested ESXi is still a feature not supported by VMware. Nevertheless, 6.5 introduces new aspects to facilitate nested ESXi. These include;

There are a ton of improvements and new features included in vSphere 6.5, much to the excitement, I suppose, of many a security team.