How to Build a VMware vSphere 6 Home Lab: Networking Options

In our first round of posts in my vSphere Homelab series, we covered host setup and storage setup. Today, we’ll dive into the basics of homelab networking.

It’s one thing to be able to install ESXi on a single host, but how do we make it as real world as possible? Sure, you can build a single host but you need multiples in order to do anything remotely cool with ESXi. You have options when it comes to networking, that’s the good thing. The negative is that realistically, you probably won’t have the hardware to support the “ideal” setup. Most consumer grade switches don’t support VLANs, so you’ll want to make sure you get one that does if possible.

NOTE: This article mainly covers the switching layer. For guidance on specific NICs to use in your homelab hosts, it is best to take a look at the 1GB NICs using the VMware Compatibility Guide. If you’re in a place where you want to test 10Gb switching in your lab, then you’ll need to adjust the physical switches listed in option 2 below.

Let’s take a look at a few options

Now we’ll start with the most simple setup, a single flat network, and a single NIC. Yuck.

Your default ESXi install actually defaults to this and it’s one of the reasons I see it all the time. It’s my least favorite of all and it could easily be argued that it’s not the way to go. The only place this should be considered an option is if you don’t have the budget to upgrade your existing switch.

I’ve seen a lot of people start this way and then quickly realize they want to upgrade to a better solution. I’d never recommend it as a consultant in a production environment but technically in a homelab, yes you could do it. It WILL work. With all of that being said upfront, what you’re essentially doing with this setup is running all vmkernel port groups and virtual machine port groups on the same NIC. All storage, virtual machine, management, vMotion, etc. If you’re lucky enough to have a host with more than a single NIC, you might want to split some of that up. Possibly put virtual machine traffic on another unmanaged switch. If you’re anything like me, you have a box of hardware laying around. For a while, I used two basic unmanaged switches in my lab and they worked ok. If your network looks like the one pictured, it might be time to move into the second option! 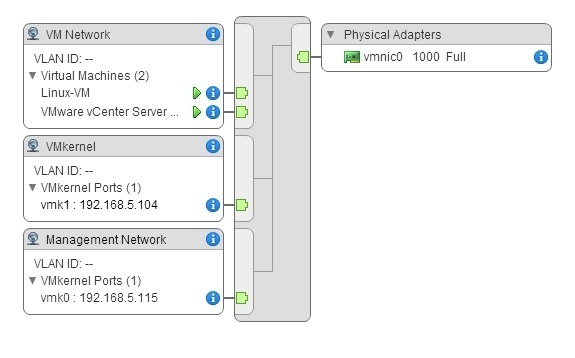 Your next best option would be to pick up a basic managed switch. One switch I’d recommend is this TP-Link 16 port. It’s a pretty good value, supports both VLANs and Link Aggregation and would allow you to segregate your network traffic even though you’re only using a single switch. Generally, I create a VLAN for management traffic, vMotion, etc. I like to keep my lab VM traffic on its own VLAN as well so it keeps my normal home network as-is. The beautiful thing is flexibility. You can now isolate everything and potentially use less physical cabling. You set up the trunk port on your switch and when adding a port group, add the VLAN ID into that field and you’re done!

A few other switch options for you if you decide to go this route:

Our last option pretty much exists for those of us who are doing nesting of our ESXi hosts. With nested hosts, the networks are virtualized on top of the ESXi host. The best part here is that because you’re nested you need a small uplink to the outside world for things like updates, etc. But other than that you can design the port groups on your physical ESXi host and build on top of those. It becomes much easier this way. As the years have passed, I have become more and more of a fan of this type of homelab. Basically, one massive physical server and smaller nested ESXi hosts hosted on top of it. It opens up scripting options and ease of deployment as well. As long as the nested ESXi hosts are on those same port groups, you’re good to go!

As I mentioned above, I am becoming more and more a fan of nested ESXi. Your nested design can more accurately represent a real scenario by breaking out the networks and you can change things more easily depending on the scenario you are currently testing for. As far as physical network design just stick with a standard managed switch, I’m not partial to brands but have had great luck with the TP-Link one I linked above. If you’re looking to go one step above, you could buy two physical switches for even more redundancy and load balancing, and even start doing some failover testing and training as well! I suppose it’s all in what you have in the budget. Just stay away from one big flat network with all your services running on a single subnet. It’s troublesome and even in a lab, will barely get you by.

How about you? What type of networking setups have you used in your home labs to date? Has anything worked better than others? We’d love to know more! Let us know in the comments section below!