In part 2 of this series, I tackle the vSphere Distributed Switch (vDS), a vCenter Server component or object that is used to centralize the network configuration of managed ESXi hosts. Unless standard switches are required for a specific reason, a vDS voids the need to create a standard switch on every ESXi host. This boils down to the fact that a vDS’ configuration is pushed to any ESXi host that is hooked up to it. Let’s have a quick look at the architecture first.

The architecture of a vDS

The next diagram, kindly reproduced from the VMware site, shows the vDS’ architecture and how the management plane is kept separate from the data plane as opposed to what happens on a standard switch. This partitioning scheme makes it possible to roll out one distributed switch across a number of hosts as opposed to creating a standard switch on every host. The management plane, in case of vDS, resides on the vCenter Server while the data plane, also referred to as a host proxy switch, is local to the ESXi host. This is the primary reason why vCenter Server needs to be installed if distributed switching is in your bucket list. 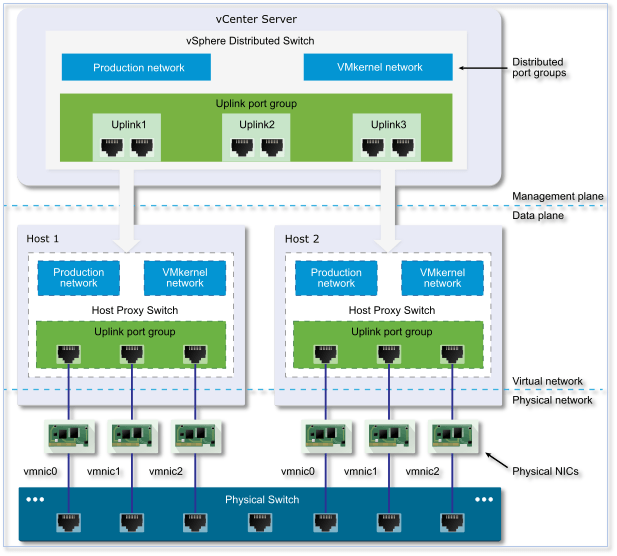 The vDS also introduces a couple of new abstractions namely the Uplink Port Group and the Distributed Port Group. Below is an explanation for each, taken from here;

For the remaining how-tos in this post, I’ll be using the vSphere Web Client. The vSphere setup I am using here consists of a virtualized vCenter Server 6.0 U1 managing two nested (virtualized) ESXi 6.0U1a hosts.

To create a new distributed switch, follow these steps;

Once you’ve logged in vCenter Server using the vSphere Web client, select Networking from Navigator. With the Datacenter name highlighted, in this case DC, right-click on it selecting New Distributed Switch from the Distributed Switch sub-menu (Figure 2).

Proceed by completing the information asked for by the wizard, in this order; 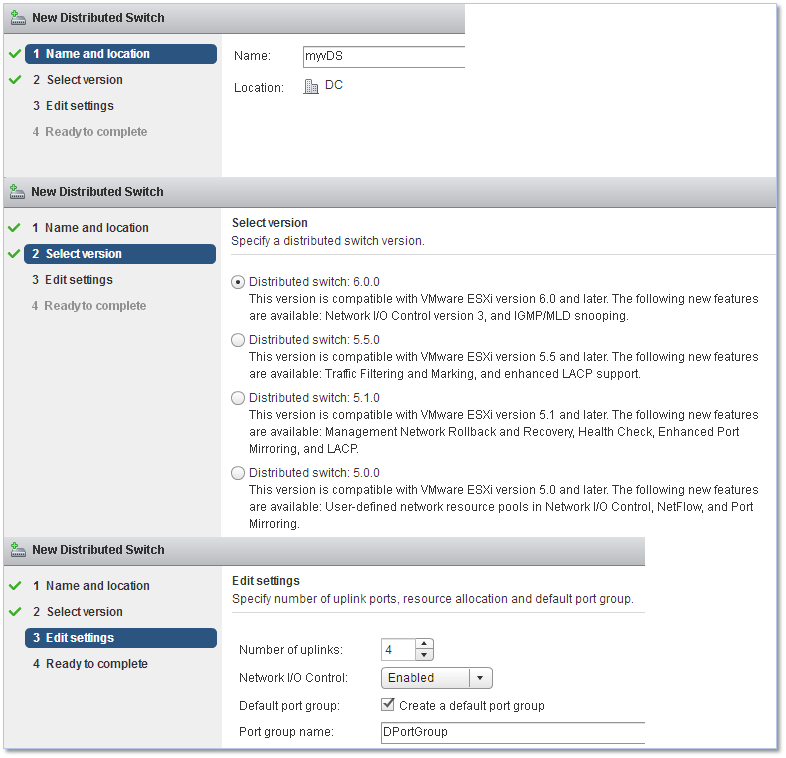 Figure 3 – Completing the configuration of a vDS

Similar to what I covered in the first article of this series, you can use PowerCLI to create a distributed switch on vCenter using the following example. Note that the location parameter is mandatory. I’m already connected to the vCenter Server on which I want the switch created via the Connect-VIServer cmdlet.

So far we have simply created an empty switch. The next step is to add hosts to it.

Adding hosts to a vDS

Having created the distributed switch, we can now add the ESXi hosts we’d like connected to it.  Before proceeding, however, make sure that;

To add hosts to the vDS, simply right-click on the name of the vDS just created and select Add and Manage Hosts. 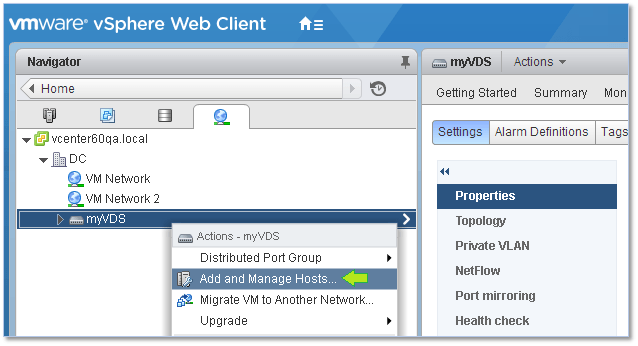 Figure 5 – Adding hosts to a vDS

The first screen of the wizard presents a number of options but this being the first time we’re adding hosts to the vDS, the only options that really interest us are Add hosts and Add host and Manage host networking. I’m going by the first.

Click on New hosts and, on the secondary window, tick the check-box next to whichever host you want to be connected to the vDS. Click Next when done. 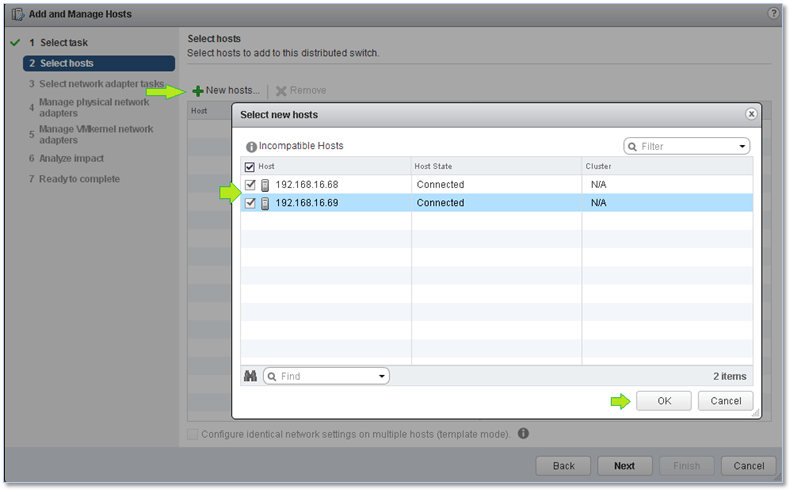 Figure 7 – Selecting the hosts to connect to the vDS

Yet again, you are presented with a number of options. In the figure below, I’ve chosen to add uplinks to the switch as well as migrate any VMkernels, set up on the hosts (set up on standard switches), to the vDS by selecting the first two options. 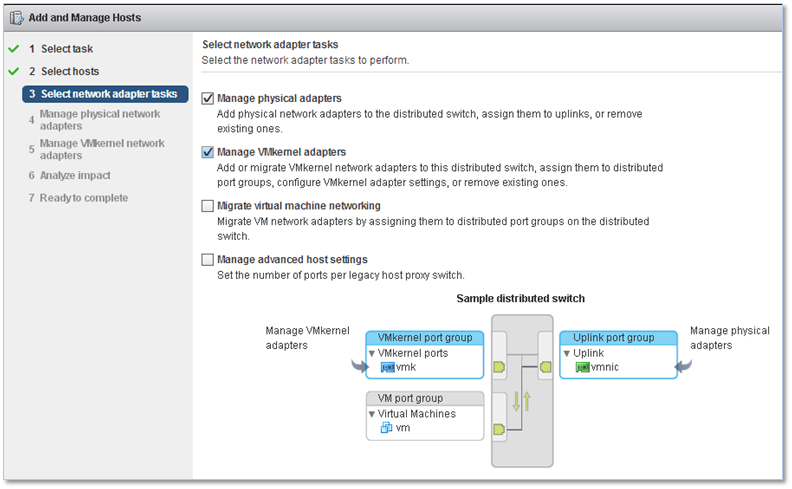 The next screen gives you a summary of what’s available on the host in terms of physical NICs. A warning pops up if any of the NICs are found to be already bound.

Figure 9 – Selecting the physical NICs to bind to the vDS

The next step helps you to migrate any existing VMkernels to the vDS’ port group. To do so, highlight the VMkernel you wish to migrate and click on Assign port group. Select the required port group from the secondary window.

Figure 11 – Migrating VMkernels to the vDS

Next, an impact analysis is carried out where checks are made to ensure that running services are not impacted by the network changes being done.

Click Finish to finalize the Add and Manage Hosts process. 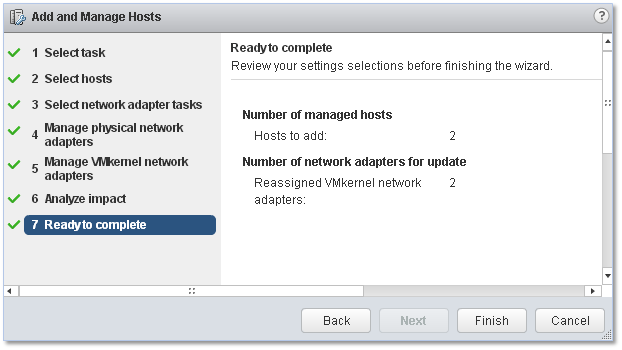 In order to verify that all the VMkernels marked for migration have been correctly moved, select the vDS’ port group from Navigator and switch to the Manage tab. On the Ports screen, you should be able to see the migrated VMkernels each assigned to a respective port on the vDS. The link-state for each should also be up.

Figure 14 – Ensuring that the VMkernels are port connected and running

Likewise, you should make sure that all hosts report as active on the vDS. To do so, select the distributed port group object from Navigator and verify that the uplinks are up.

Figure 15 – Making sure all uplinks are active

Migrating virtual machines to the vDS

Once you’ve switched over – excuse the pun – to using distributed switches instead of standard ones, you’ll find that any virtual machines set to use port groups created on a standard switch will be left in a networking limbo unless you happened to select Migrate virtual machine networking during the vDS’ host assignment process as shown in Figure 16.

Alternatively, this can easily be rectified by changing the port group assignment from the VM’s properties. However, if there are a significant number of VMs to migrate, the migration wizard is definitely the way forward. To initiate the migration process, right-click on the vDS’ name under Navigator and select Migrate VM to Another Network. 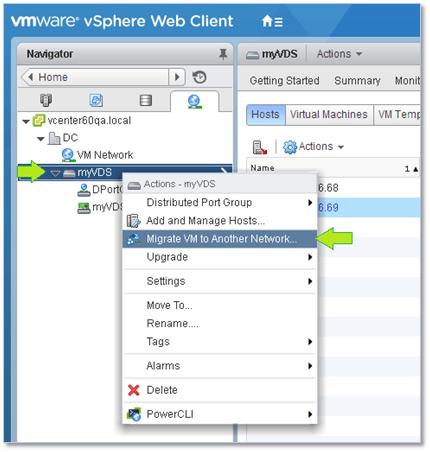 At the first screen, select the source and destination port group. As the Source network, I’ve chosen a port group called VM Network previously set up on every standard switch created. DPortGroup is the destination network on the vDS to which the VM will be migrated. 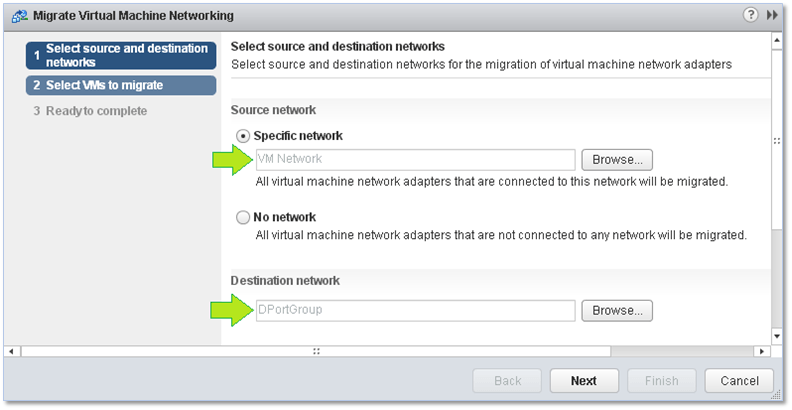 Figure 18 – Setting the source and destination networks when migrating VMs

Figure 19- Selecting the VMs to migrate

Alternatively, and as mentioned, any VM can be reassigned to any port group by changing the same from the network settings. 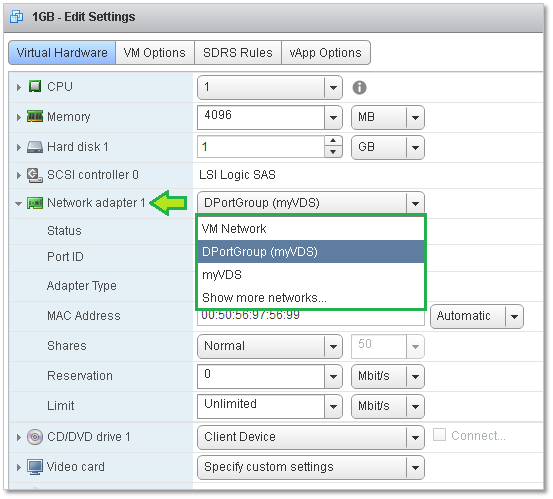 There are a number of settings extra to those found on standard switches. Similarly, you’ll find a bunch of configuration settings applicable to the switch itself as well as the distributed port and uplink groups created.

The switch settings are accessible by clicking on the Edit button shown in Figure 21. In addition, you can configure advanced features such as port mirroring, allowing you to mirror traffic from one port to another for analytical and diagnostic purposes and private VLANs which are used to overcome the limitations of VLAN IDs by further segmenting broadcast domains into smaller sub-domains. You can also enable and configure Cisco’s NetFlow protocol to monitor IP traffic and aggregate links for greater bandwidth using LACP. 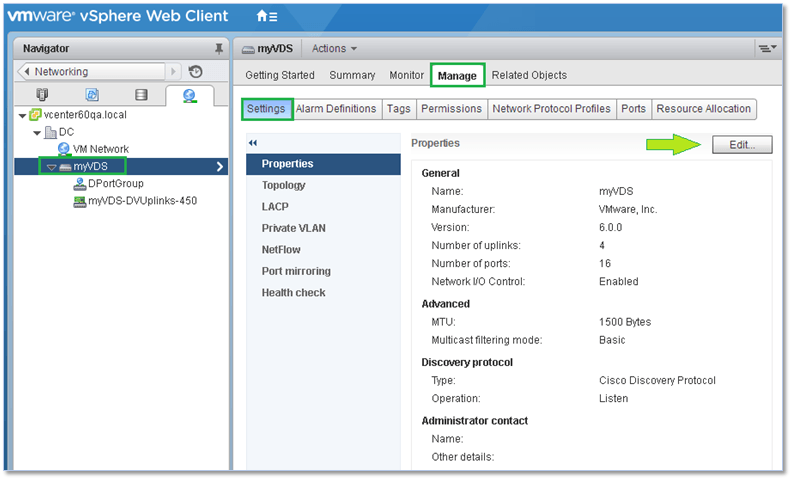 Similarly, the distributed port and uplink group settings are accessible by clicking on the Edit button shown in Figures 22 and 23. 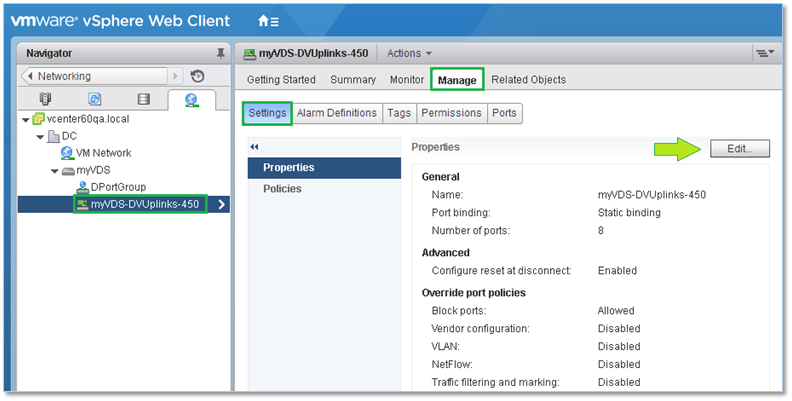 Something important you should keep in mind is that you still have to set up and configure VMkernel adapters on a per-host basis similar to what you have been doing with standard switches.

Figure 24 – Setting up a VMkernel on an ESXi host

There are more options you will need to explore many of which are documented in great detail on the VMware documentation site. I cannot possibly go into each and every option as I would end up replicating what’s already available out there making this post a never-ending one.

One last feature I’d like to talk about is TCP/IP stacks, in particular how they can be used to segregate the network traffic associated with a particular service ultimately improving performance and security.

By default, vSphere provides three TCP/IP stacks with these being the default, vMotion and provisioning stacks which can all be configured from the TCP/IP configuration screen of an ESXi host as shown below.

Each stack can have its own default gateway and DNS configuration meaning any service bound to a particular stack will effectively be running on its own network if configured as such. In addition, you can also choose the type of congestion control algorithm and the maximum number of allowed connections. 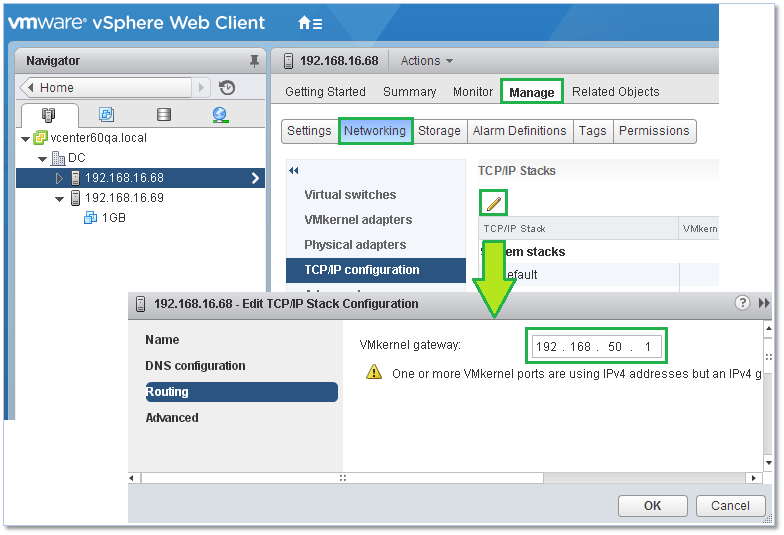 Figure 26 – Configuring the default gateway on a TCP/IP stack

Default – This stack is generally used for management traffic, vMotion, storage protocols such as iSCSI and NFS, vSAN, HA, etc.

vMotion – This stack is used when wanting to isolate vMotion traffic. To achieve this, create a VMkernel on every host configured for vMotion and set the kernel to use the configured vMotion stack. The steps are as follows;

Figure 27 – Creating a VMkernel on an ESXi host 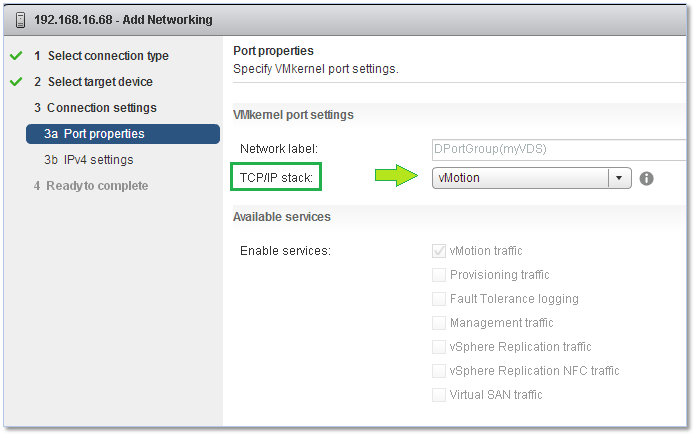 Provisioning – This stack is generally used to isolate traffic related to cold migrations, cloning and snapshots.

If required, you can use ESXCLI to create custom stacks. The command is as follows;

In this series, we learned the differences between standard and distributed switching together with a brief explanation on port groups, VMkernels, VLANs and a few other topics. The information presented is by no means exhaustive but it should suffice to get you started with the networking side of vSphere. As always, the best way to learn is to experiment and try things out for yourself.