How to Build a VMware vSphere 6 Home Lab: Storage Options

With my previous home lab post being so popular, I wanted to do a lab series here on the blog. One of the first topics I will post on will be some of the storage options that you can use. We’ll stick with free or cheap options because while some of us have monster budgets, a lot of us are doing home labs on very limited budgets. 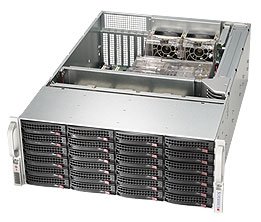 Why Do I Need a Home Lab?

Let me explain what I’m doing first. My general mentality when it comes to storage is to use a dedicated machine.

In my lab, I have a re-purposed Supermicro SC846 chassis that has ESXi 6.7 installed on it with the primary intent being to provide storage. I have 3x LSI cards in IT mode connected to the backplane (that can handle up to 24x hot swap drives), passed through to an OpenMediaVault virtual machine. The 846 chassis is relatively cheap these days. This not only provides storage for my personal files and media files, but I can also carve up storage as NFS or use iSCSI if I wanted to. I decided awhile back to retire some of my older HP DL380G6 units and put the memory into this beast. So It has 196GB of memory which I can use for virtual machines as an added bonus.

Normally the SC846 is a pretty loud machine and wouldn’t be ideal in a home environment but with the execution of a cron job at boot and some IPMI commands, I can quiet the machine down a bit without taking too much of a temperature hit. It’s whisper quiet and I haven’t had a single issue with this set up.

It’s not FreeNAS and ZFS but it’s easy to maintain and takes very little resources. For now, I have a couple RAID 6 volumes to play with, it runs like a champ, and it gives me room to grow for quite awhile. Most of the disks in my labs are actually 8TB shucked easystore units from Best Buy. Little known tip: easystores often go on sale for significantly cheaper than a bare Western Digital NAS drive and if you got in early enough were really red labeled NAS drives! Nowadays you probably get some form of a white drive which has similar drive characteristics though.

FreeNAS is another option that works quite nicely if you want to set it up like I did. Build a “storage” host and build a FreeNAS VM or install it directly to the hardware. Your choice.

Before building up the Supermicro, I actually used a Synology unit. A newer comparable unit to what I used would be the DS1817+ unit. Consider one of these with an SSD cache. You’ll get solid performance out of it. The benefit of using something like that or a QNAP would be easy support. My Synology has been running great with no issues for years. The Synology had great plugins and a ton of third party options that get you a good value for your money.

As far as other options, I occasionally use vSAN on my Intel NUC and Shuttle clusters. My biggest thing and a reason why I don’t use vSAN as my primary storage is that I am constantly tearing down things in my lab. As flexible as vSAN is, sometimes I want to power it all down and try something new. Sure, I could do a rolling host update or something but I lose the ability to do things super quick. In a real world environment though, vSAN is hard to beat. The best part of vSAN is I’m not having to buy any other hardware for storage. I can just use my local disks and set it and forget it.

NOTE: When choosing vSAN, if the chosen storage controller is supported in vSphere, it does not mean that it’s supported in vSAN. Make sure to check the VMware Compatibility Matrix for this.

The often forgot about option is to do a single physical ESXi host with a single SSD datastore with additional nested ESXi hosts and vSAN running on top of it. I often do this when I’m in a pinch and only have a single host and want to try something. Nested isn’t necessarily a wrong answer when it comes to home labs these days, we would obviously only want an SSD as a bare minimum as any HDD is going to be a massive I/O bottleneck but it’s enough to prep for any exam you might want to take or to just play with and then delete.

Another option is to setup a basic NFS share running on a Windows box. It’s not going to be any kind of power house but for basic storage needs in a lab, it will be more than enough.

Next you need to create a new Windows directory that will be used as an NFS mount point. Switch to the Server Manager console and go to File and Storage Services-> Shares. Run New Share Wizard (Tasks -> New Share) and then select NFS Share-Quick. 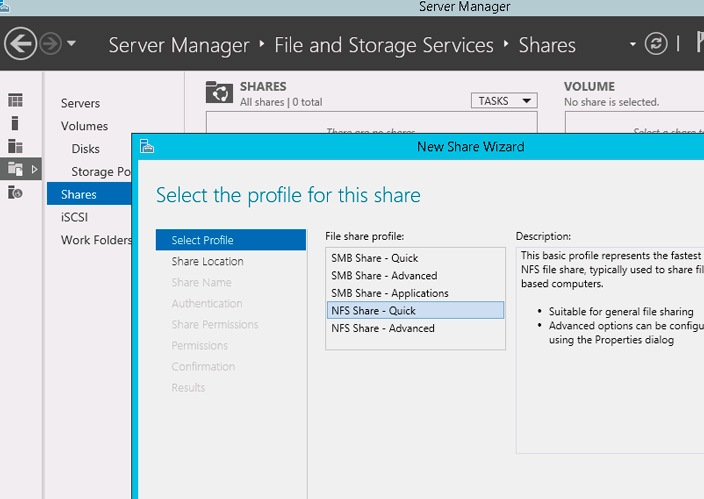 To wrap up, you have several options from simple and easy to free and a bit more expensive. If you’re into homelab stuff, I recommend the VMUG Eval Experience for $200 a year. It gives you access to vSAN as well!

What about you? Are you using some sort of storage not mentioned in the post above? Let us know in the comments section below! We want to hear from you!

4 thoughts on "How to Build a VMware vSphere 6 Home Lab: Storage Options"