What is VSAN HCI mesh compute cluster in vSphere 7 Update 2?

Since the rise of Hyperconverged Infrastructures (HCI) and storage virtualization several years ago, VMware has been at the forefront of the movement with VSAN, alongside major players like Nutanix, Simplivity (now part of HPE), VXRail and such.

The main point of hyperconvergence is to consolidate multiple stacks that traditionally run on dedicated hardware in the same server chassis through software virtualization. NSX-T virtualizes the network and VSAN takes care of the storage over high-speed networking. Meaning you don’t need third-party appliances like storage arrays in the case of vSAN. 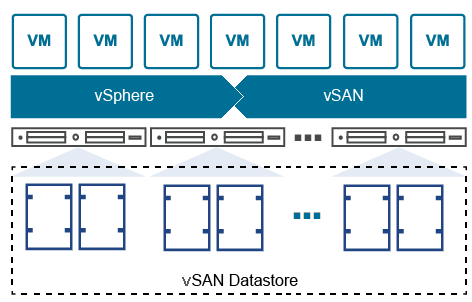 If you aren’t too familiar with VSAN, make sure to check our blog How it Works: Understanding vSAN Architecture Components, which will give you a better understanding of what it is and how it can help your organization.

VMware vSAN is enabled at the cluster level. Each node contains a cache and a capacity tier that make up the shared datastore. VMware offers vSAN Ready Nodes which are certified hardware configurations verified by VMware and the server vendor.

However, you may have already identified how it can become tricky to efficiently scale and maintain a homogeneous cluster. For instance,

Back in vSAN 7 Update 1, VMware proposed a new feature called “HCI mesh clusters” to try and mitigate this issue by allowing organizations better use their capacity.

In a nutshell, HCI Mesh allows vSAN clusters to remotely mount the datastore of another (remote) vSAN cluster, hence sharing the storage capacity and span its usage to a wider pool of compute resources. 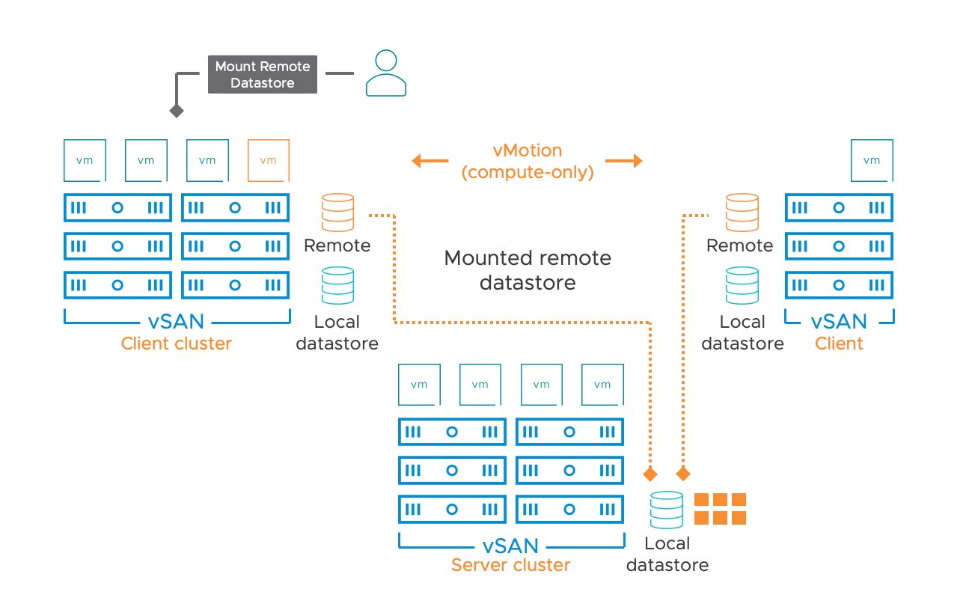 Now, you may wonder, “Why not run one single cluster in which I throw everything in?”.

Most virtual environments actually start off with a single cluster and grow it as demand increases. However, past a certain point, it is relevant to reflect on the design and consider splitting the capacity into multiple clusters.

Adopting such a segregation of your workloads at the cluster level not only improves the organization of resources but also enhances security overall.

In vSphere 7 Update 2, VMware listened to the customers and built on the HCI Mesh feature by extending it to regular (Compute) clusters. The great thing about it is that VSAN HCI compute mesh clusters can be enabled on any cluster and no vSAN license is required!

Once the remote vSAN datastore is mounted, virtual machines can be migrated between clusters using regular vMotion. 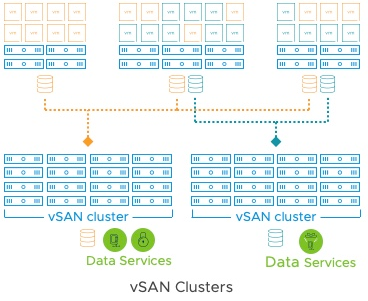 Just like HCI Mesh clusters, HCI Mesh compute clusters use RDT as opposed to other protocols like iSCSI or NFS. RDT (Reliable Datagram Transport) works over TCP/IP and is optimized to send very large files. This is to ensure the best performance and rock-solid reliability.

Before starting with vSAN HCI mesh clusters, consider the following requirements and recommendations:

Note that stretched clusters are not supported as of vSAN 7 Update 2. Meaning it is not recommended at this time to mount a remote vSAN datastore over high-speed WAN.

I will show you here how to remotely mount a vSAN datastore using HCI Mesh Compute Cluster.

In this example “LAB01-Cluster” has vSAN enabled with a vSAN datastore creatively renamed “LAB01-VSAN”. Whereas the vSphere host in “LAB02-Cluster” has no local storage but a vSAN enabled vmkernel in the vSAN subnet for the sake of simplicity.

Again, you do not need a vSAN license in the client cluster. 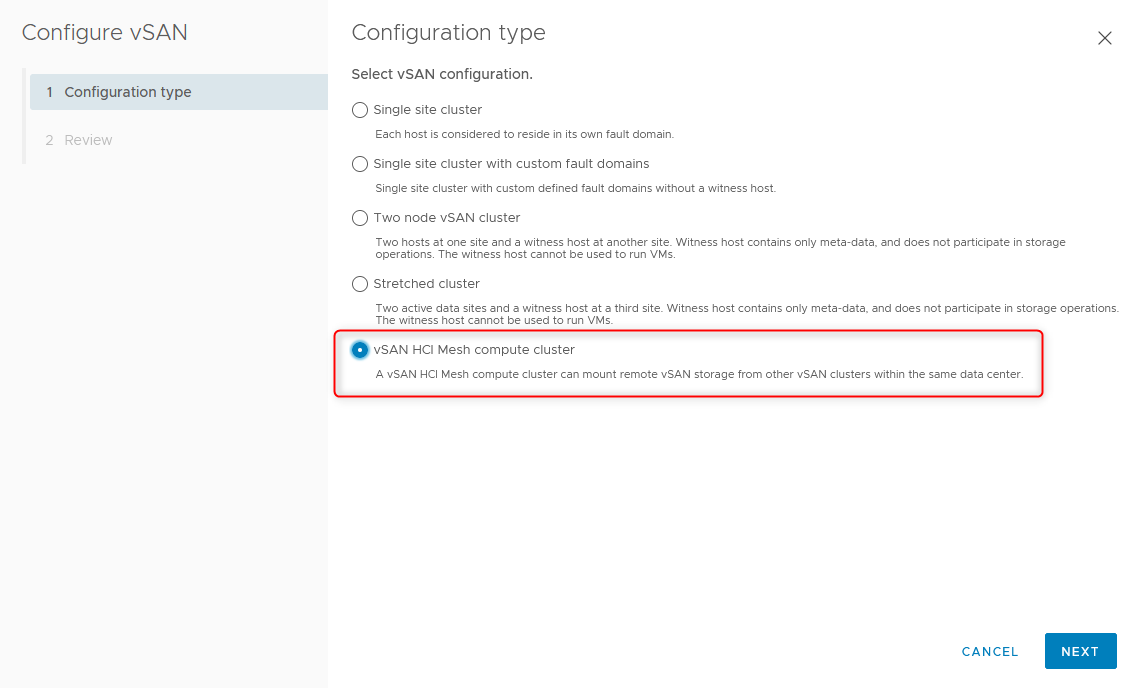 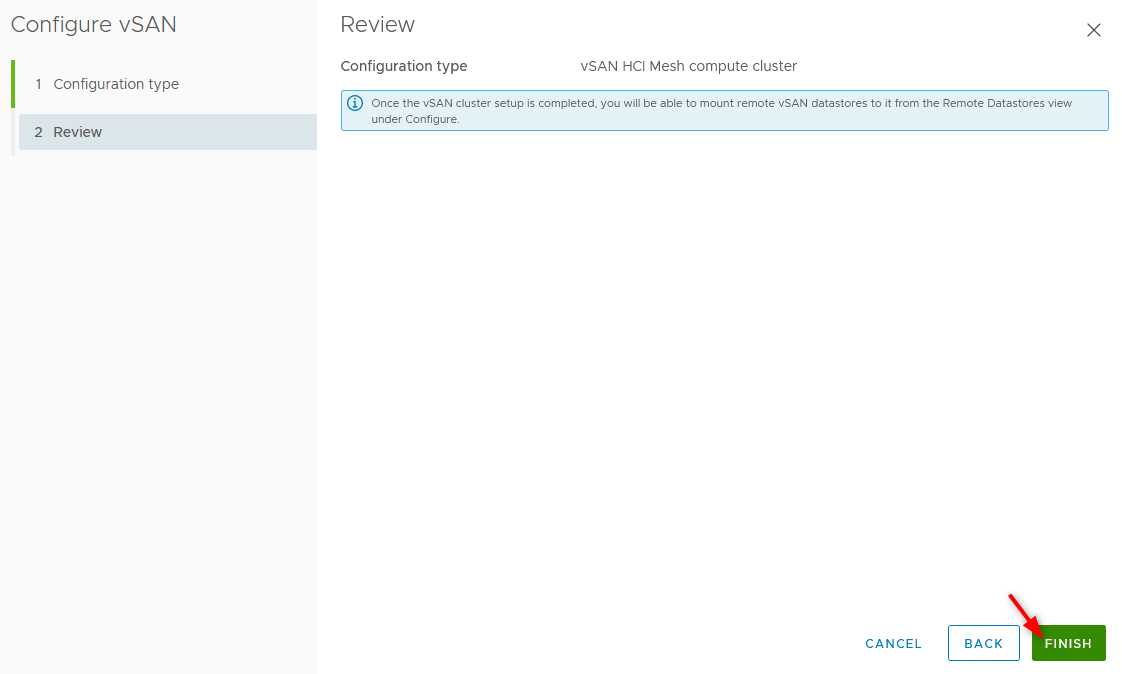 Once enabled, remote datastores can be mounted 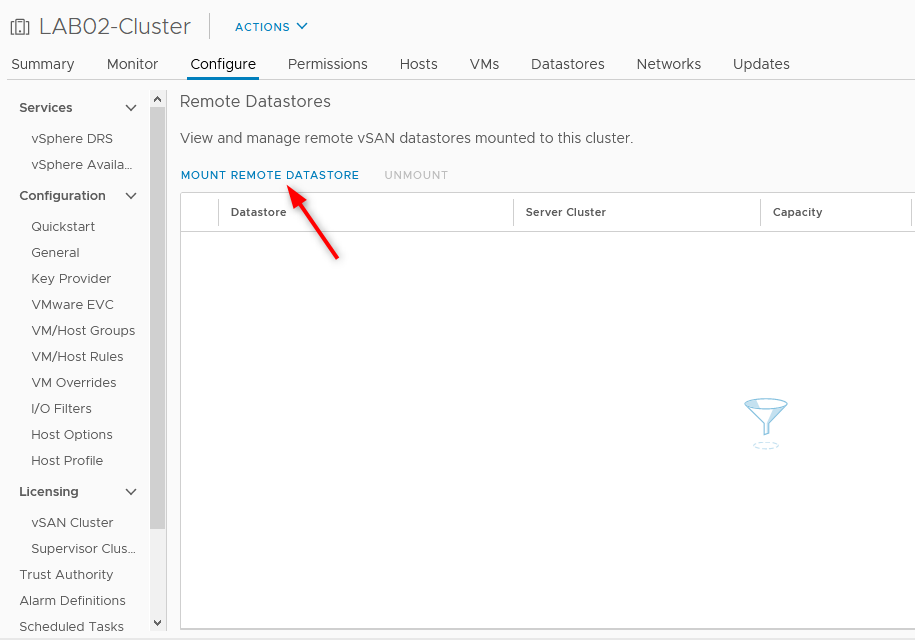 The remote datastore pane will get you started

All compatible vSAN datastores should appear in the list. If they don’t, make sure the remote cluster is running a supported version of vSAN. As you can see below, the list contains “LAB01-Cluster”. Select it and click Next. 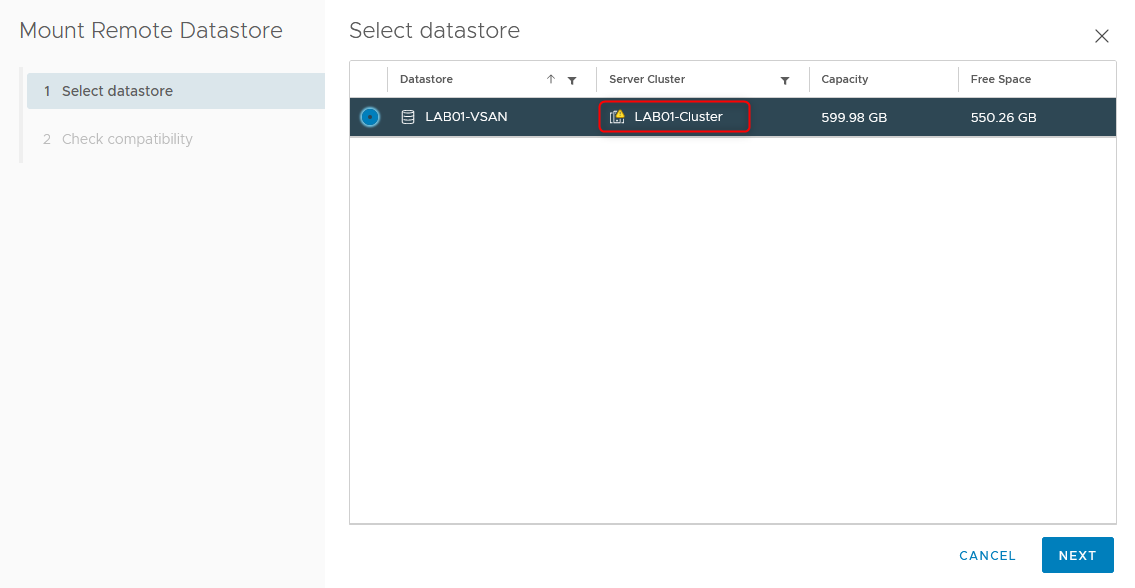 All compatible vSAN clusters are listed for selection 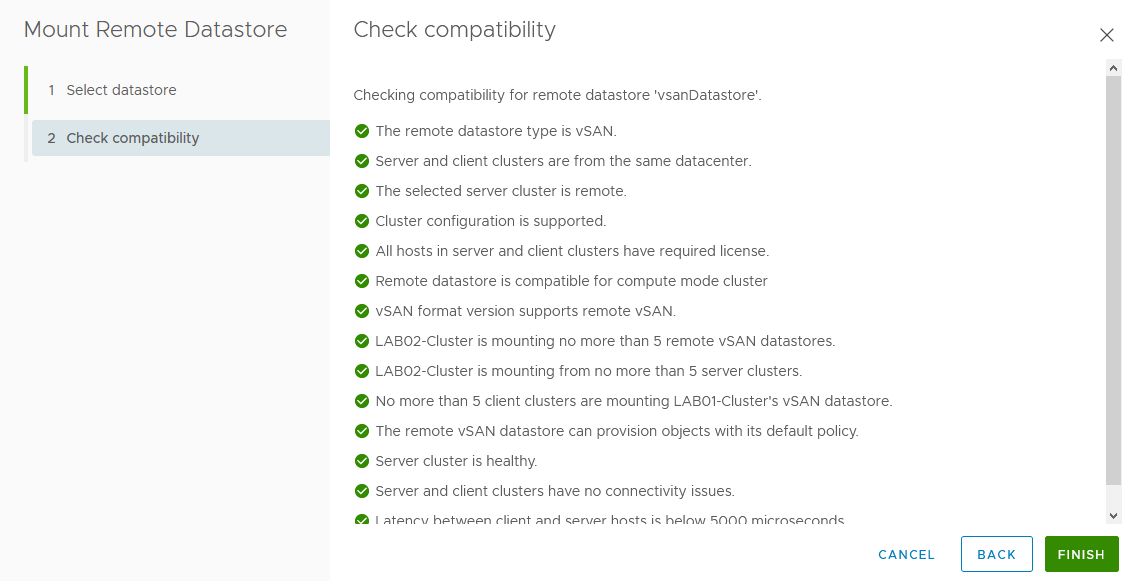 The client (remote) cluster displays the list of mounted datastores

Note that this is also displayed in the vSAN configuration pane of the server cluster (LAB01), except the datastore appears as “Local”.

Mounted datastores should appear on the client hosts

If the VM was already stored on the vSAN datastore, you can execute a simple vMotion to the client cluster. Note that the mounted vSAN datastore appears as “Remote” in the datastore list when performing a storage vMotion.

Mounted datastores appear as remote when moving a VM 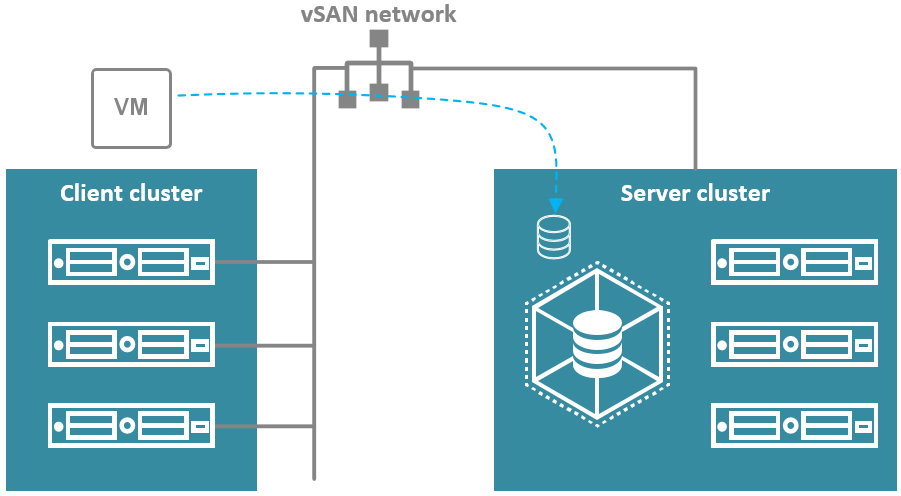 Another nifty feature that was added alongside HCI Mesh Compute Cluster are storage rules. Just like RAID levels, those are specified at the VM storage policy level. They add the storage services as a layer of restriction for compatible datastore when applying the policy to a VM. 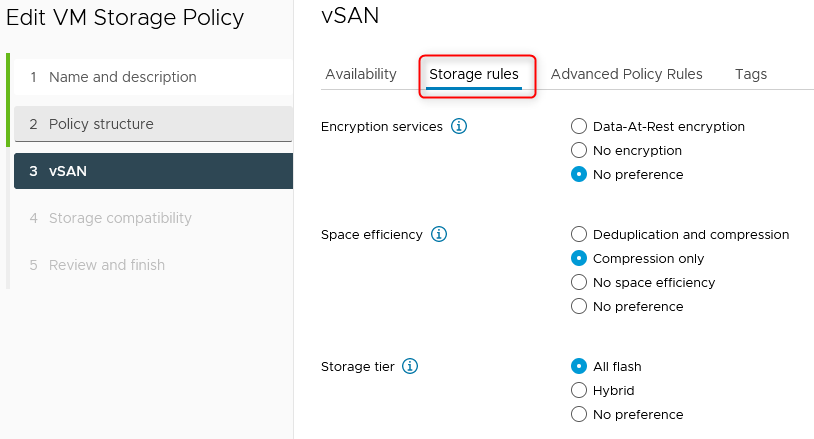 If you need to unmount a remote datastore, you need to ensure that it is not used by any VM on the client cluster or it won’t be possible. This also concerns the vSphere Cluster Service (vCLS) VMs.

While very handy and flexible, such a setup should bring a number of questions regarding availability and tolerance to failures. All vSAN related failures such as disks and nodes incur the same consequences and actions as in a regular vSAN cluster. In this section, we will cover 2 cases that apply to the HCI Mesh compute clusters.

Failure of the link between client and server clusters

Now, in the case of an HCI Mesh architecture, what would happen if the link that connects the hosts in the client and server clusters were to fail? 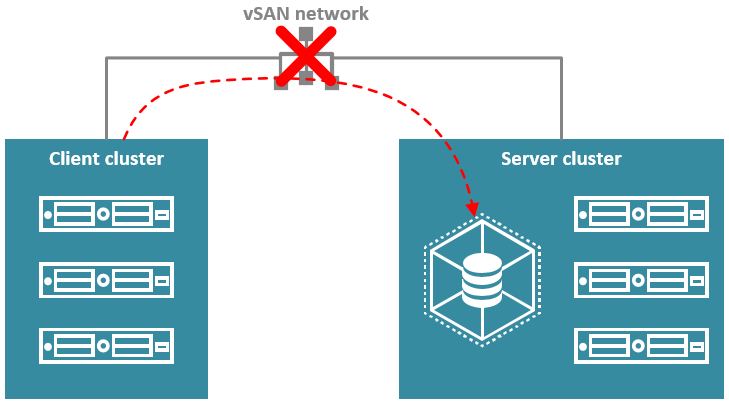 It is recommended to configure vSphere HA with “Datastore with APD” set to either conservative or aggressive which will result in the following chronology of events:

After the APD timers are reached, the response is triggered by powering off the VM which appears “inaccessible” until the link is restored.

APD event at the client cluster level: VM powered off

If a host in the client cluster loses its vSAN links, the behavior will also be similar to a traditional APD (except here the delay is 180 seconds instead of 140). 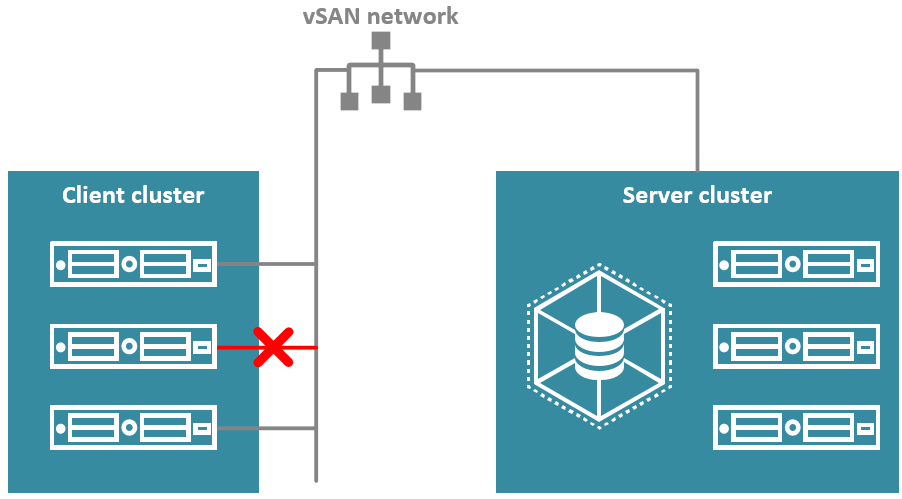 Once the APD response timer is reached, the virtual machine is restarted on a host that still has access to the datastore.

Ever since its original launch back in 2014, VMware vSAN has dramatically improved over the release cycle to finally become a major player in the hyperconvergence game. It offers a wide variety of certified architectures spanning multiple sites, ROBOs and 2-node implementations (direct-connect or not). Those make vSAN a highly versatile product fitting most environments.

vSAN HCI Mesh Compute Clusters is yet another option brought to you to leverage your existing vSAN environment and make better use of these datastores.

Deploying a vSAN cluster may not be such a huge investment compared to a traditional SAN infrastructure. However, scaling it up is not always financially straightforward as the cost of additional nodes is greater than regular compute nodes. HCI Mesh Compute Clusters offer SMBs and smaller environment the flexibility to present an already existing vSAN datastore to up to 5 clusters!