Storage is the building block of data persistency

In this article, we will have a look at how to provision storage for Kubernetes workloads directly on vSphere cloud native storage without resorting to an extra software layer in between.

In the infrastructure world, storage is the building block of data persistency which comes in many different shapes and forms, including vSphere cloud native storage. Shared storage lets you leverage clustering services and enables a number of data protection scenarios that are vital to most IT environments. Ensuring a solid storage backend will give IT departments much appreciated peace of mind as storage outages are among the most dreaded failure scenarios in any IT professional’s mind. Despite the growing number of storage solutions available on the market, provisioning shared storage in a vSphere environment is something that many now consider mainstream, as it is a tried a tested process. VMware vSphere environments offer several options for storage such as VMFS, vSAN, VVols and NFS to store your virtual machines and other resources consumed by the hypervisors among other things.

In recent years, VMware have extended the reach of vSphere storage backends and the capabilities of the vSphere suite to integrate more closely with modern applications, in other words, container workloads and microservices that leverage vSphere cloud-native storage. An area VMware has been heavily involved in after the acquisition of several Cloud Native companies like Pivotal to build their VMware Tanzu portfolio.

While the flexibility and customization potential of Kubernetes is unbeatable, its complexity means that the learning curve is fairly steep compared to other infrastructure solutions. Let’s see how vSphere Cloud Native Storage deals with that.

First of all, what is Cloud Native? The term Cloud Native has been somewhat of a buzzword these last few years and it started appearing in more and more places. Cloud Native mostly refers to infrastructure agnostic container workloads that are built to run in the cloud. That means no more monolithic software architectures and separation of duties. Microservices are meant to be service-specific workloads interacting with each other in a streamlined fashion. Kubernetes is a container orchestrator platform that has been enabling this revolution and became the de-facto industry standard for running containers in enterprise settings.

Having said that, not all workloads running on Kubernetes can be stateless and ephemeral. We still need to store data, configs and other resources permanently on backends such as vSphere cloud native storage for those stateful applications. That way the data will remain even after ruthlessly killing a bunch of pods. Here come persistent volumes (PVs). Kubernetes resources that let you provision storage on a specific backend like vSphere cloud native storage to store data persistently. 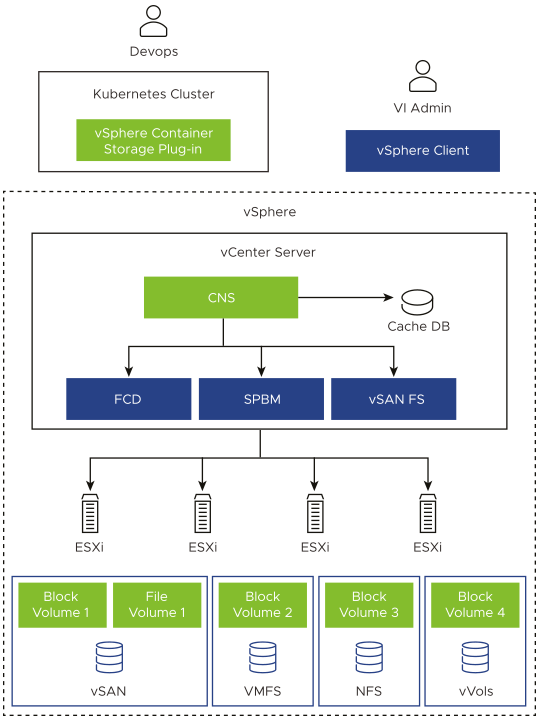 VMware Tanzu is an awesome product; however, it is easy for a vSphere admins to jump headfirst in it with no prior knowledge of Kubernetes just because it has the “VMware” label on it. This makes the learning process incredibly confusing and not a great way to start on this journey. So, before we dig in, I’d like to cover a few Kubernetes terms for those that aren’t too familiar with this. More will follow in the next chapter.

The terms described in the previous chapter are the building blocks of provisioning vSphere Cloud Native storage. Now we will quickly touch base on what a Container Storage Interface (CSI) driver is. As mentioned earlier, persistent volumes are storage resources that let a pod store data onto a specific storage type. There is a number of built-in storage types to work with but the strength of Kubernetes is its extensibility. Much like you can add third-party plugins to vCenter or array-specific Path Selection Policies to vSphere, you can interact with third-party storage devices in Kubernetes by using drivers distributed by the vendor, which will plug into the Container Storage Interface. Most storage solution vendors now offer CSI drivers and VMware is obviously one of them with the vSphere Container Storage Interface or vSphere CSI which enables vSphere cloud-native storage.

When a PVC requests a persistent volume on vSphere, the vSphere CSI driver will translate the instructions into something vCenter understand. vCenter will then instruct the creation of vSphere cloud native storage that will be attached to the VM running the Kubernetes node and then attached to the pod itself. The added benefit is that vCenter will report information about the container volumes in the vSphere client with more or less information depending on the version you are running. And this is what is called vSphere Cloud Native Storage. 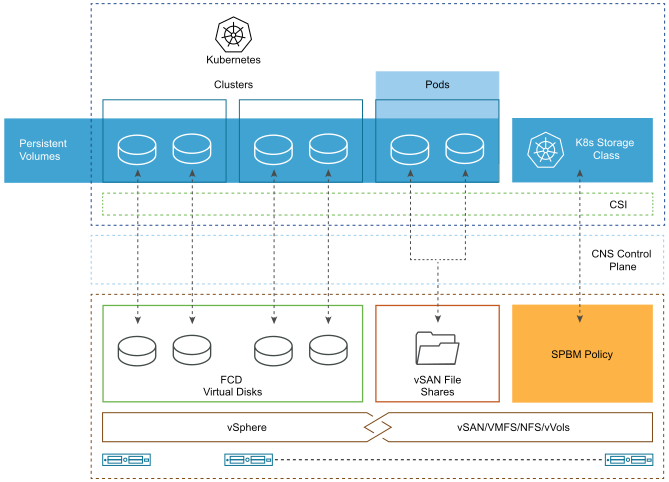 Now in order to leverage vSphere cloud native storage, the CSI provider must be installed in the cluster. If you aren’t sure or you are getting started with this, you can use CAPV or Tanzu Community Edition to fast track this step. Regardless, the configuration to instruct the CSI driver how to communicate with vCenter is contained in a Kubernetes secret (named csi-vsphere-config by default) that is mapped as a volume on the vSphere CSI controller. You can display the config of the CSI driver by opening it.

Part of the job of an SRE (Site Reliability Engineer), or whatever title you give to the IT professional managing Kubernetes environments, is to work with storage provisioning. We are not talking about presenting iSCSI LUNs or FC zoning to infrastructure components here, we are working a level higher in the stack. The physical shared storage is already provisioned and we need a way to provide a backend for Kubernetes persistent volumes. vSphere Cloud native storage greatly simplifies this process with the ability to match vSphere storage policies with Kubernetes storage classes. That way when you request a PV in Kubernetes you get a virtual disk created directly on the datastore.

Note that these disks are not of the same type as traditional virtual disks that are created with virtual machines. This could be the topic of its own blog post but in a nutshell, those are called Improved Virtual Disk (IVD), First Class Disks (FCD) or managed virtual disk. This type is needed because it is a named virtual disk unassociated with a VM, as opposed to traditional disks that can only be provisioned by being attached to a VM.

The other benefit of using vSphere cloud native storage is better visibility of what’s being provisioned in a single pane of glass (a.k.a. vSphere web client). With vSphere CNS, you can view your container volumes in the vSphere UI and find out what VM (a.k.a. Kubernetes node) the volume is connected to along with extra information such as labels, storage policy… I will show you that part in a bit.

Note that support for vSphere CSI will depend on your environment and you may or may not be able to leverage it in full. This is obviously subject to change across versions so you can find the up to date list here.

A lot of features get added over the versions of the release cycle such as:

Originally, cloud provider-specific functionalities were integrated in Kubernetes natively within the main Kubernetes tree, also called in-tree modules. Kubernetes is a highly fast-changing landscape with a community that strives to make the product scalable and as efficient as possible. The growing popularity of the platform meant more and more providers jumped on the train which made this model hardly maintainable and difficult to scale. As a result, vendor-specific functionalities must now be removed from the Kubernetes code and offered as out-of-tree plug-ins. That way, vendors can maintain their own software independently from the main Kubernetes repo.

The migration will allow existing volumes using the in-tree vSphere Volume Plugin to continue to function, even when the code has been removed from Kubernetes, by routing all the volume operations to the vSphere CSI driver. If you want to know more, the procedure is described in this VMware blog.

I will demonstrate here how to provision vSphere cloud native storage on vSAN without going too much into the details. The prerequisites to this demonstration is to have a Kubernetes cluster running on a vSphere infrastructure with the vSphere CSI driver installed in it. If you want a head start and skip the step of installing the CSI driver, you can use CAPV or Tanzu Community Edition to deploy your Kubernetes cluster.

“The PVC creates a VMware cns with a PV”

“The PVC should automatically create a PV”

The volume name matches the name of the persistent volume claim, I also tagged it in Kubernetes to show how the tags are displayed in the vSphere client. 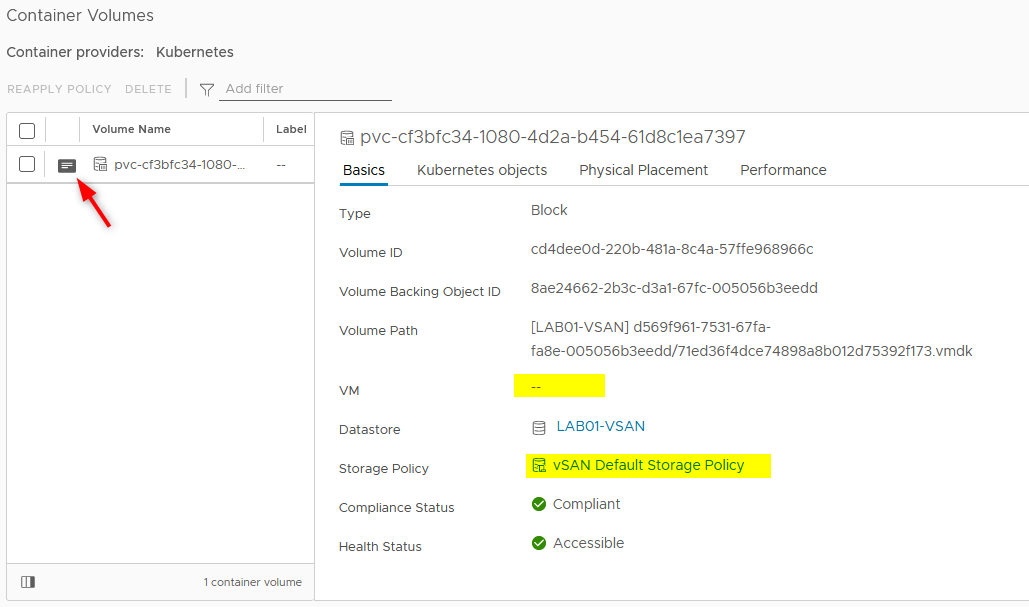 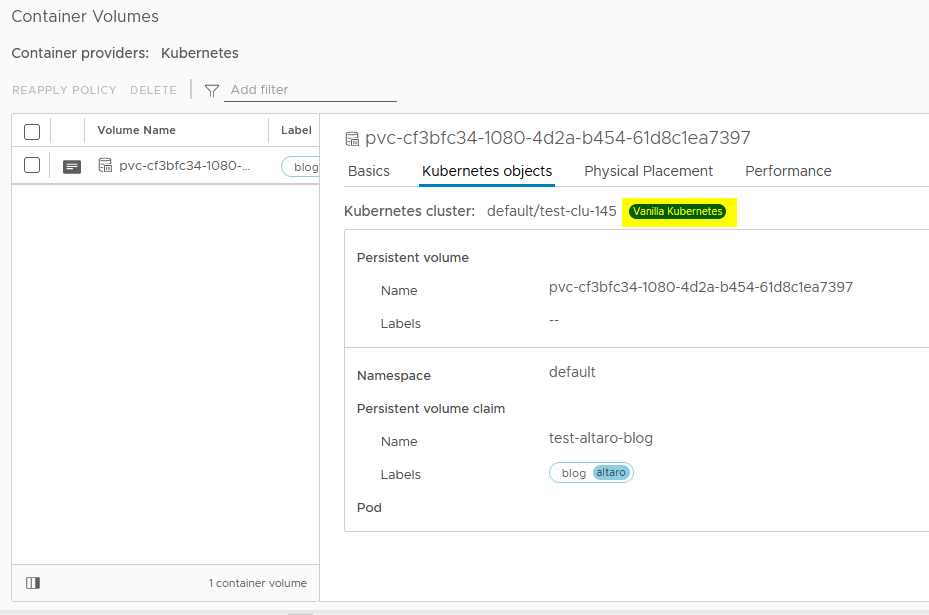 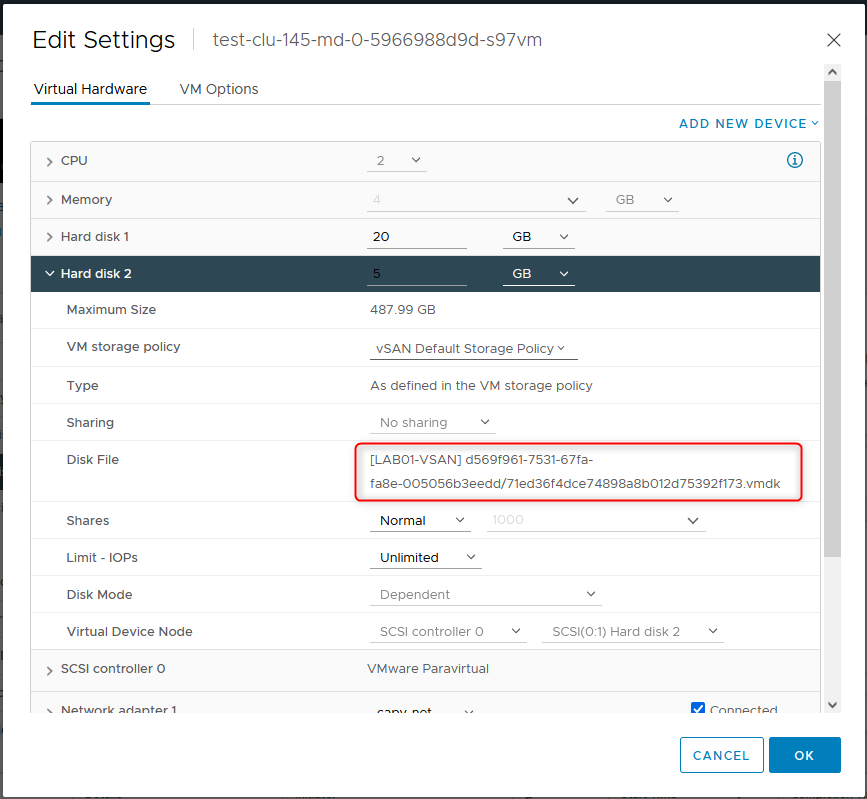 Most IT pros will agree that the learning curve of Kubernetes is fairly steep as it is a maze of components, plugins and third-party products that can seem daunting at first. However, they will also agree that Kubernetes has been one of the fastest-growing technologies in the last 5 years. The big players in the tech industry have all jumped on the bandwagon and either developed their own product or added support/managed services for it somehow. VMware is one of them with their Tanzu portfolio and vSphere Cloud native storage is a critical component of this stack as it reduces the complexity by offering vSphere storage to Kubernetes workloads. The cool thing about it is that it is made easier to use thanks to the CSI driver plugin architecture and tightly integrated with the vSphere web client for added visibility.

What is vSphere Cloud native storage?

Cloud Native Storage (CNS) is a feature that makes Kubernetes aware of how to provision storage on a vSphere infrastructure in a fully automated and scalable way. It also offers visibility for admins with the CNS UI within vCenter.

What is native cloud storage?

What is CNS VMware?

Cloud Native Storage in VMware refers to the ability to provision Kubernetes persistent volumes on a vSphere infrastructure.

Does Kubernetes do block storage?

What are two possible vSAN storage options for container-based apps orchestrated by Kubernetes?

Option 1: You can use block storage and leverage read-write once (RWO). Option 2: You can also use vSAN file service which is backed by the NFS protocol and lets you provision Read-write many (RWX) PVs.