We all know how cool the vSAN architecture is by now and it is no secret that its use has been growing significantly over the last few years. In fact, it has almost reached the status of commodity and is the foundation of the VCF stack. We will not cover how to set it up but rather how does vSAN work under the hood.

For the uninitiated, vSAN is a storage feature that is integrated into vSphere and pools disk space from multiple ESXi hosts. I always say it makes a non-useful disk, useful. Local disk without vSAN is just that! Local disk. You can’t do much with it! Either way, I’d recommend checking out the Altaro VMware vSAN Webinar, if you’re looking to be brought up to speed.

We are going to discuss vSAN architecture in a bit more depth in this post, as in some of the more in-depth components to make it work behind the scenes. Yes, it’s easy to setup, manage and use. A lot of people have asked me in the past how difficult it can be to troubleshoot it and I’ve outlined some of the tools in the Troubleshooting ebook I wrote for Altaro. You can grab a copy of it using this link. I’ve heard people even go as far as say it’s magical because it’s so easy. Magical, indeed. 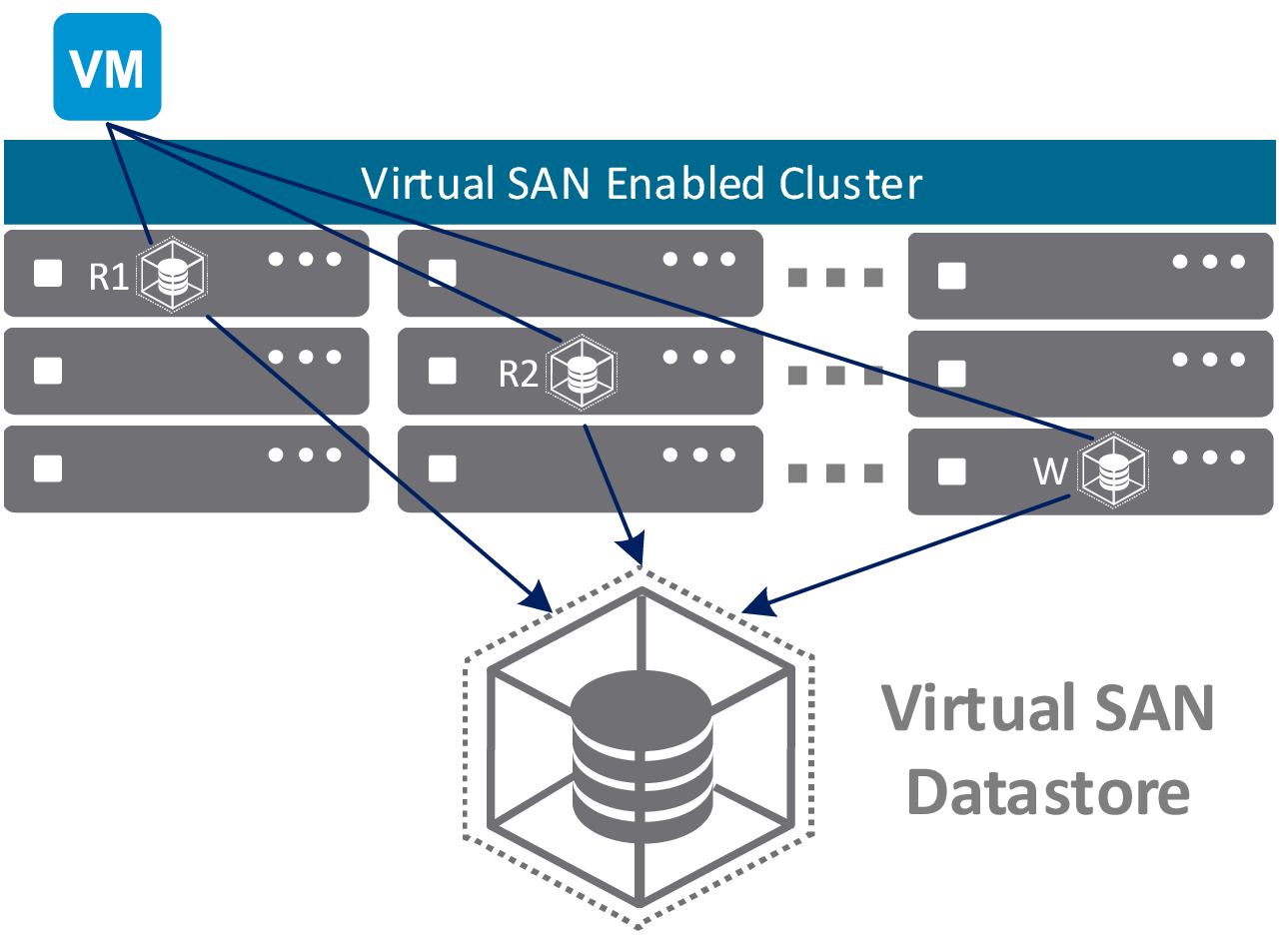 “Because it is easy to operate, the vSAN architecture is more probably complicated than you might think”

Just because it’s easy doesn’t give you a free pass on knowing how the vSAN architecture works though. At some point, you’ll likely have to troubleshoot it and you’ll want to know this underlying stuff. Also, it is great to how to easily create a vSAN iSCSI LUN. Understanding how something works make figuring out how to fix it when it goes wrong a thousand times easier. Or you can setup vSAN using a nested environment. However, aside from the practical gain, it’s also just super cool knowing how it works!

How does vSAN work? Let’s first start with a few specifics about vSAN architecture and the server roles. Roles are applied during cluster discovery when all nodes participating in Virtual vSAN elect a master.

There is one master that is responsible for getting CMMDS (clustering service, more on that later) updates from all nodes and distributing these updates to agents.

If no host can communicate with any other host, each host will be in its own partition and will be designated its own “master” node. In these scenarios when multiple hosts are reporting themselves as “master”, we call this a partition, which is a very similar concept to vSphere High Availability.

While we are only skimming the surface of how vSAN works, those are pretty advanced concepts and relate directly to how the product works under the hood. As a vSAN customer, chances are you won’t have to dig into this unless required by VMware support. However, it is important to understand which component does what, just like with vSphere and vCenter.

In this chapter, we will focus on the following components of the vSAN architecture. I’ve heard a few people use the “house building” analogy and it’s stuck with me. So I’ll explain the components using those terms. They are also depicted in the VMware vSAN architecture diagram below. 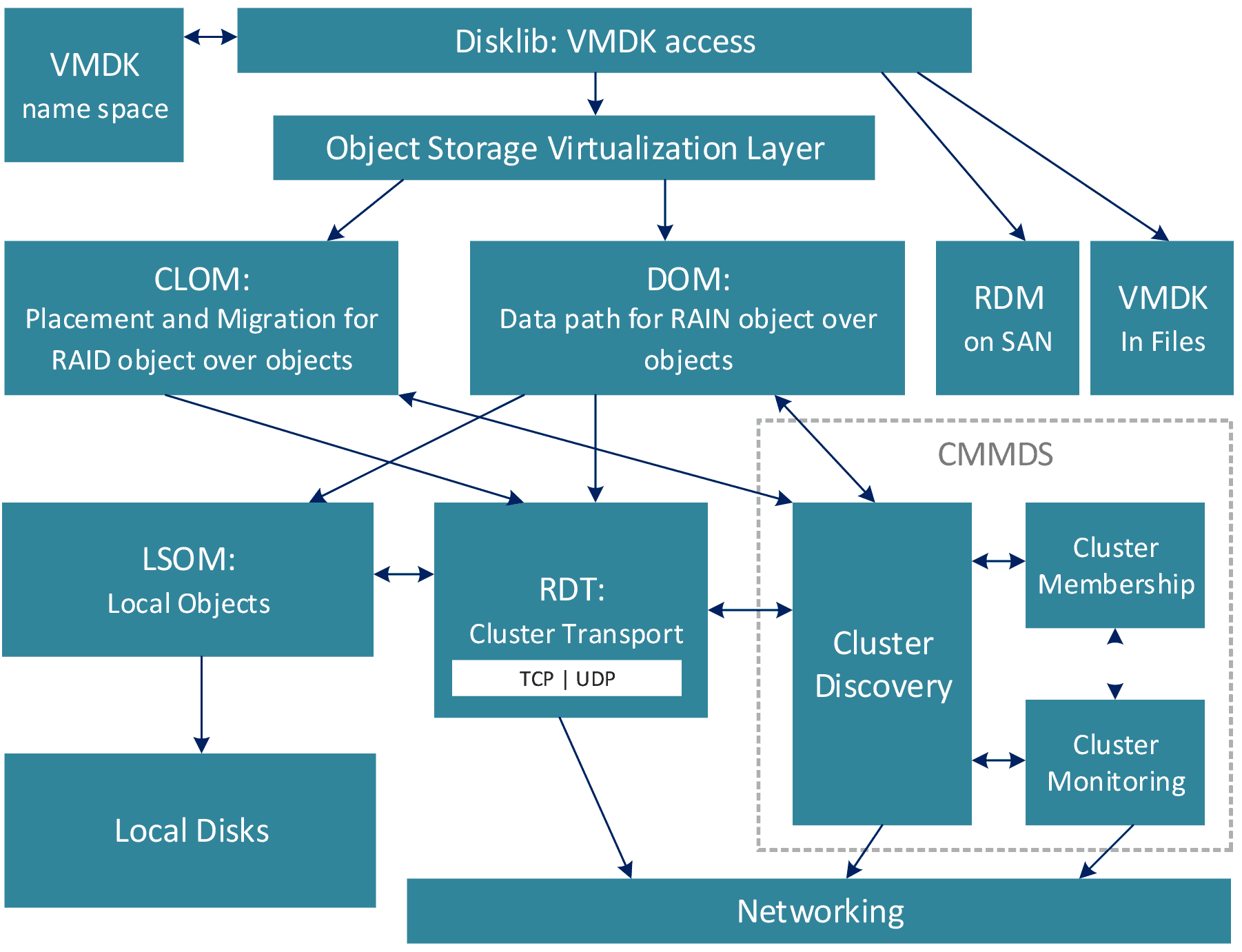 “The CLOM process runs on every node in the vSAN architecture.”

The CLOM process is managed with the /etc/init.d/clomd stop/start/restart command. You may encounter vSAN advanced settings referring to CLOMD that enable you to change the behavior of vSAN such as rebuild delays.

DOM is the Contractor, it runs on each ESXi host in the cluster and handles the following functions: Note that the DOM exists in kernel space, meaning there is no daemons to monitor or restart without rebooting the host.

In the vSAN architecture, each object in a vSAN cluster has a DOM owner and a DOM client.

There is one DOM owner that exists per object and it determines which processes are allowed to send I/O to the object.

The DOM client performs the I/O to an object on behalf of a particular virtual machine and runs on every node that contains components.

LSOM is the Worker. It creates the local components as instructed by the DOM that was described previously.

The vSAN VMware architecture diagram shows the importance of CMMDS. It is the Project Manager. It provides the topology and object configuration information to the CLOM and DOM components of the vSAN architecture. Information about components published into CMMDS can be found from any node using cmmds-tool.

The OSFS component is a daemon that runs on every participating node in a vSAN cluster. Its purpose is to offer compatibility with a file-system like a construct, even though the vSAN architecture is object-based.

Storage Policy-Based Management or SPBM is the most visible component of the vSAN VMware architecture as it is what the user will leverage to define where and how to place specific objects based on, you guessed it, policies.

In the house-building analogy, RDT is the Delivery Truck. It is the network protocol that is optimized to send very large files and that is used for the transmission of vSAN VMware architecture traffic between hosts.

How do all the Components Interact?

In a nutshell for the vSAN architecture, when the CLOM receives a request to create an object, the CLOM determines whether the object can be created with the selected VM storage policy. If the object can be created, the CLOM instructs the DOM to create the components. The DOM then decides what components are created locally and instructs the LSOM to create the local components. The LSOM interacts at the drive layer and provides persistent storage. The DOM interacts only with the local instance of the LSOM. If components are required on other nodes, then the DOM interacts with the DOM on the remote node.

As you can see, there are far more moving pieces to this than just building a VM and adding disks! Hopefully, this post has helped you understand a few more components of vSAN!

While operating vSAN is fairly easy from a VI admin perspective, the vSphere client hides well the complexity of the vSAN architecture. It takes a number of server roles and components to offer resilient, low latency, and secure virtualized storage spanning local disks across several servers. Add on top of that vSAN 7 new features such as HCI mesh compute clusters or stretched vSAN architectures and you obtain a state-of-the-art distributed virtualized storage backend. Multiple businesses and SMBs are already benefiting from vSAN.

While it is now a few years old, you can also find extra content in this interview of vSAN experts. Feel free to add your questions below in the comments if you want any more clarification about anything presented here or just on vSAN architecture generally.

What is vSAN and how it works?

vSAN is a software-defined storage solution embedded in vSphere ESXi. It leverages local disks for hybrid and full flash implementation as well as stretched architectures to provide shared storage across cluster nodes. It works with a combination of server roles and components fullfilling each a specific duty.

What are three vSAN cluster architectures?

The 3 main vSAN cluster architectures includes traditional clusters running in the same location, stretched clusters where the nodes are distributed in failure domains and ROBO architectures which only run a couple nodes and achieve quorum with a vSAN Witness virtual appliance running in a different location (usually HQ).

What are vSAN components?

Each vSAN object is made of a set of components. it is determined by the cluster resources and the configuration of the applied VM Storage Policy.

What is vSAN in VMware?

vSAN is a software-defined storage solution that virtualizes local storage to offer shared storage to all cluster nodes without requiring a more traditional SAN array.

What are two architectures that require a vSAN witness host?

The vSAN witness host is used in Stretched cluster or 2-node cluster configurations.

How do I configure vSAN?

Once all the prerequisites are satisfied and networking is configured accordingly, vSAN can be enabled in the Configuration pane of the Cluster view in the vSphere client.