Everything in VMware vCenter Server 7 – New Features in vSphere 7

What is VMware vCenter Server?

What exactly is vCenter Server, and what role does it play in vSphere architecture? While the VMware ESXi hypervisor can run as a standalone hypervisor host, the true power and enterprise features that most organizations look to benefit from by using VMware vSphere are unlocked and made possible with vCenter Server.

VMware vCenter Server provides the centralized management plane of the VMware vSphere solution and allows creating clusters of VMware ESXi hosts. By creating vSphere clusters with vCenter Server, this enables the enterprise vSphere capabilities and features. These include, but are not limited to, the following:

VMware vCenter Server also provides centralized RESTful API communication for interacting with vSphere for the purpose of automation as well as integrating solutions with vSphere such as data protection or other third-party providers.

Other highlights of using VMware vCenter Server as part of your vSphere infrastructure include:

Streamlined Management and Optimization – vCenter Server allows you to streamline management and optimization of the resources across your vSphere environment. With vSphere HA and DRS, organizations have the built-in tools needed for availability and resource scheduling across the vSphere cluster.

Role-based access – VMware vCenter Server provides the centralized management tool of your VMware vSphere environment. This provides the ability to delegate permissions among administrators in a granular fashion.

Third-party extensibility – With vCenter Server, you get a powerful platform that is commonly extended by third-party providers. Most of the major hardware vendors now offer plugin integration with vCenter Server that allows integrating native hardware management into vCenter, such as storage devices, right from within the vSphere Client.

Why Do you need vCenter Server?

The question may arise, if I can run VMware ESXi hosts as standalone hypervisors, why do I really need a vCenter Server? It is true that VMware ESXi is the platform that actually runs your virtual machines and not vCenter Server. So, you can technically run virtual machines on top of ESXi without vCenter. However, for production environments, you should consider vCenter Server as a required component. VMware vCenter Server is the component of the vSphere infrastructure that unlocks all of the really great features that are needed for production environments such as vMotion, High-Availability (HA), and Distributed Resource Scheduler (DRS).

Production environments, in most cases, need to have the ability to withstand a host failure. VMware vCenter Server enables creating vSphere clusters. A vSphere cluster is a logical grouping of multiple ESXi hosts that are able to communicate with one another in a way that allows aggregating resources. This also makes possible truly de-coupling the VM from a particular set of ESXi host hardware. This allows unleashing and benefiting from the true nature of virtualization – hardware abstraction. If a host fails in a vSphere cluster, VMware HA takes over and the VM is restarted on a healthy host in the cluster.

In addition, this provides flexibility in scheduling maintenance periods for your ESXi hosts. If a particular host is in need of maintenance or updates, the VMs can simply be evacuated from the particular host using vMotion, and moved to a different host. This essentially revolutionizes maintenance periods. With VMware vMotion technology, organizations can effectively perform maintenance and other operations during normal business hours, without issue. Again, this is made possible only with vCenter Server. 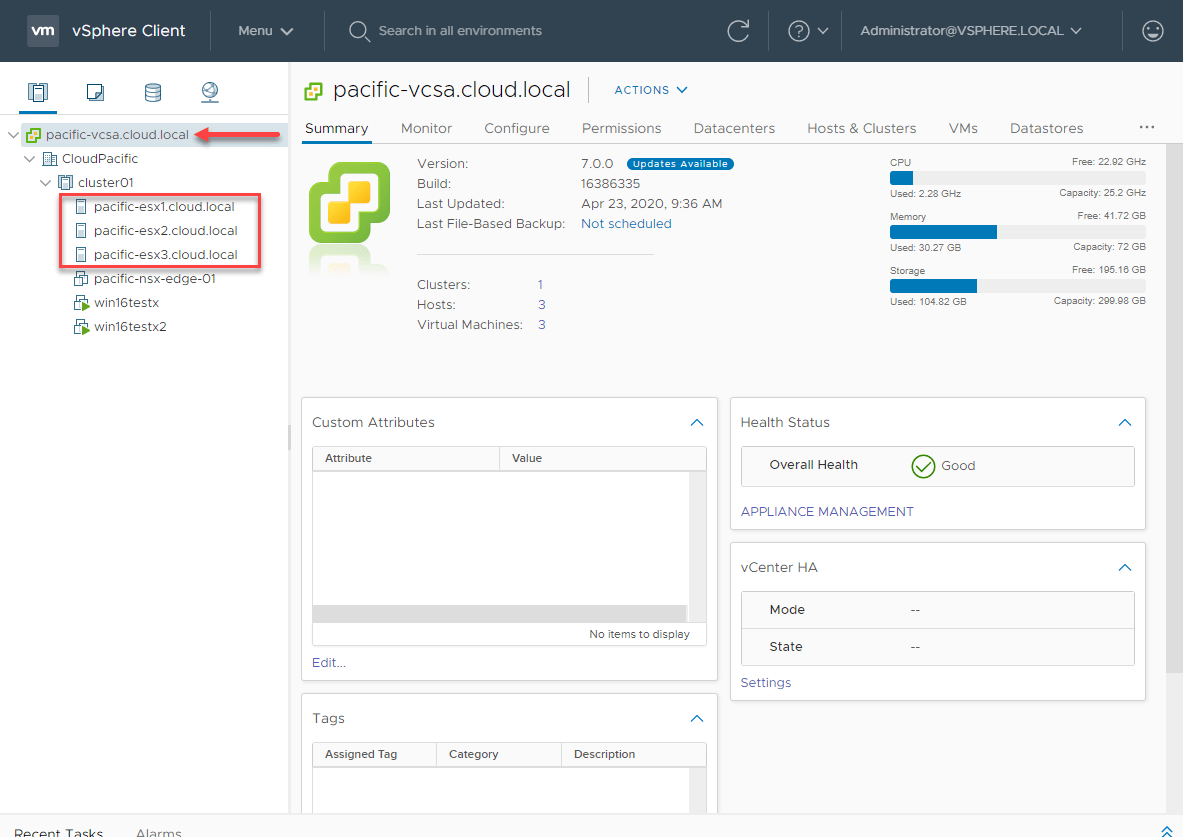 Aside from creating vSphere clusters, VMware vCenter Server makes management of multiple standalone ESXi hosts much easier. A single ESXi host or two can be managed by logging into each host and performing management operations and actions. However, if your environment grows to multiple or perhaps dozens of ESXi hosts, managing your hosts on a host-by-host basis will be cumbersome and time-consuming.

In contrast, VMware vCenter Server allows managing your vSphere environment, including vSphere clusters and standalone hosts, all from a centralized console using the HTML5 vSphere Client interface. Operations and management tasks can be performed across your various hosts, all from within the same login session. Additionally, vCenter provides a centralized API to interact with your entire vSphere environment. This means that any third-party backup solutions or other third-party tools used by your organization will be able to do so from a single vCenter Server connection instead of individual connections to multiple hosts.

As mentioned earlier, can you operate ESXi without vCenter Server? Yes, you can with basic functionality. Do you want to? Most likely not. VMware vCenter is a powerful part of the overall vSphere infrastructure and is required for many of the enterprise-level features that provide high-availability and other business-critical capabilities.

What is the difference between vCenter and ESXi?

We have touched on this to some extent, however, let’s define each and see how they fit into the overall vSphere infrastructure architecture.

Where is VMware vCenter Server Installed?

You may wonder how and where you install VMware vCenter server to operate as the centralized management component of your VMware vSphere infrastructure. VMware vCenter Server is deployed as a virtual appliance. So, this means for all practical purposes, it is another VM in your vSphere inventory. This type of deployment of vCenter Server affords your organization a great deal of flexibility in where the VCSA appliance is provisioned for managing the vSphere environment. You can even deploy the VCSA appliance on the same vSphere cluster that the vCenter Server instance manages.

However, there are some “chicken and egg” scenarios that you can avoid by carefully considering where the VCSA appliance is deployed. Running your VMware vCenter Server in the same vSphere cluster it manages can increase the risk of issues resulting from an outage on the underlying vSphere cluster.

Below are the prices for vCenter Server as well as either Basic or Production support options according to VMware’s vSphere Pricing page.

Let’s take a closer look at each of the new vCenter Server features and see how they will allow your organization to have an even more powerful and flexible vSphere environment.

One of the new features included with vCenter Server 7 is vCenter Server Profiles. What are these? With the vSphere 7 release, VMware has introduced many new features that allow capturing the “state” of your vSphere environment. This is especially true when you look and see how the new vSphere Lifecycle Manager (vLCM) works and the methodology behind it. It is a desired state and declarative model for applying updates and upgrades within your vSphere environment. 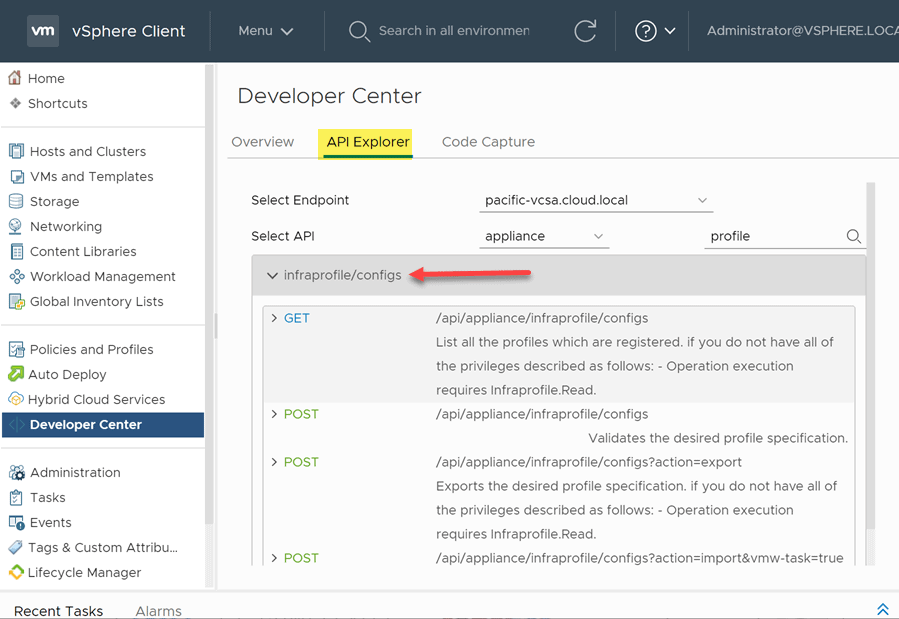 Another great new feature included in vCenter Server 7 is the Update Planner. Previous to vSphere 7, updating vCenter involved a lot of manual effort on the part of a vSphere administrator. Discovering all the prerequisites and interoperability concerns before updating was a labour-intensive process.

Prior to vSphere 7, this process often involved many error-prone tasks, including performing your own discovery via blogs, emails, and looking at interoperability matrices. If a vSphere administrator finds outdated or inaccurate information and proceeds forward with an update based on that information, this can potentially lead to issues.

VMware has introduced the new Update Planner tool as part of the release of vCenter Server 7. This new tool helps to discover when updates are available as well as proactively discovers any interoperability issues or pre-update tasks that may be involved with applying updates to vCenter.

The Update Planner is a component of the vSphere Lifecycle Manager that sets out to ease the pain of keeping vCenter Server updates applied in a way that interoperates with the rest of your vSphere environment without issues. With Update Planner, vSphere administrators get a consolidated workflow that encompasses the tasks involved with updating vCenter Server.

The thing I like about the Update Planner is that it is seamlessly integrated into the normal vSphere Client dashboard in the Hosts and Clusters view. You can readily see updates as they become available and easily view the update information presented.

Once you see the Updates Available button next to your Version information for vCenter, you can click the button and you are taken directly to the Update Planner workflow. 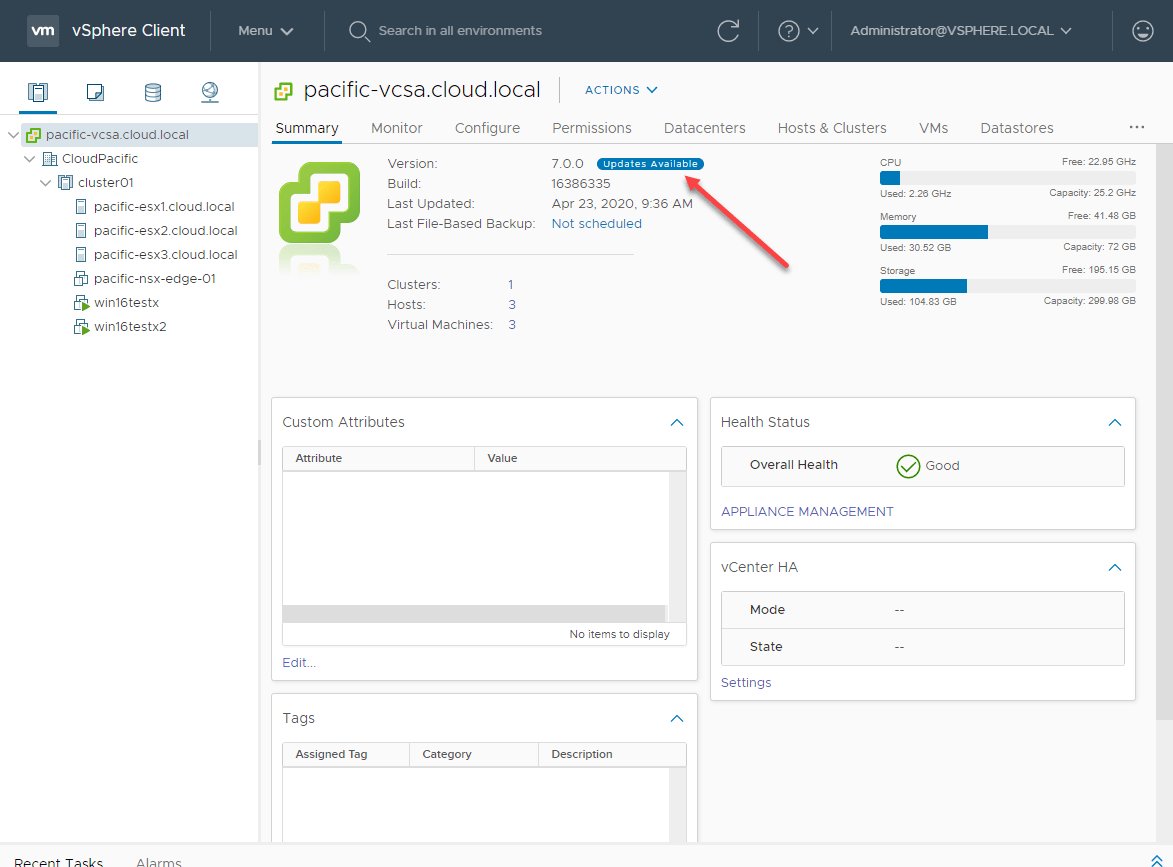 Once in the Update Planner, it allows generating two different kinds of reports based on the update found. These include: 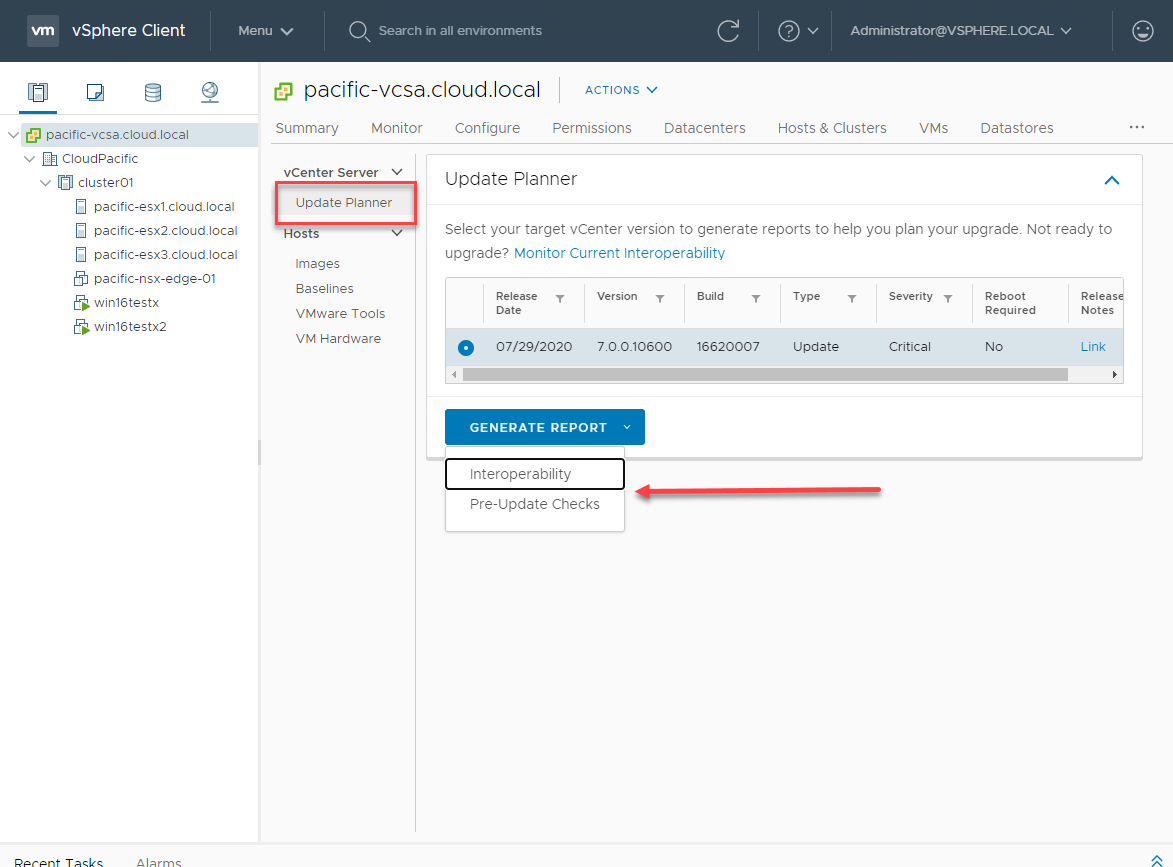 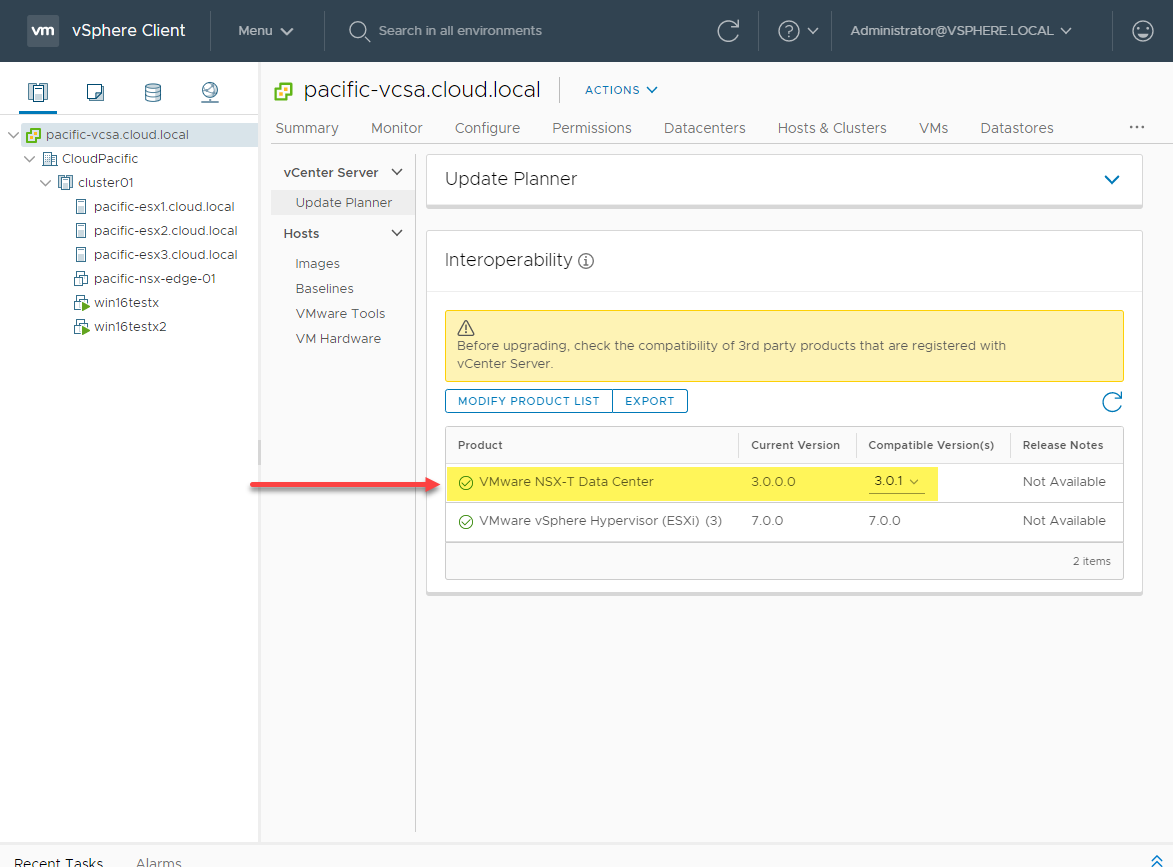 Now, when deploying the vCenter Server 7 appliance, vSphere administrators will see a note from the installer regarding their external Platform Services Controller. It will automatically converge the current configuration with the external PSC into a new converged appliance that is running the embedded PSC.

This drastically simplifies both the convergence process for consolidating the PSC into a single appliance, and it also simplifies your organization’s vSphere infrastructure. 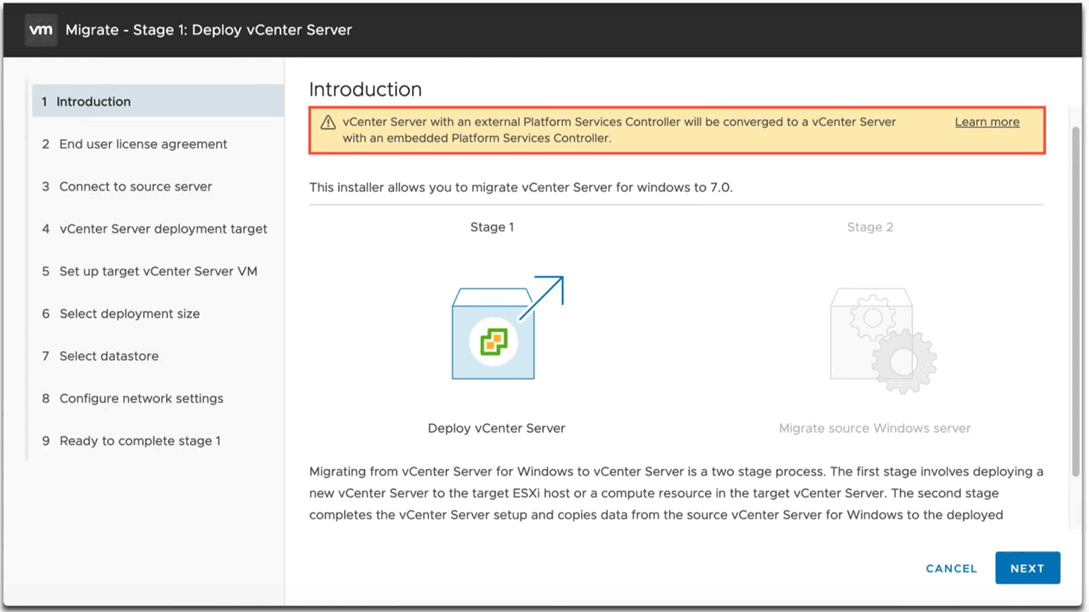 Some organizations may have very strict compliance requirements that dictate how and over which networks business-critical systems are accessed. Others may have dedicated networks to perform certain operations such as backups and other processes. The new multi-homed NICs support found in vCenter Server 7 provides many more options for businesses to be able to configure the network on their vCenter Server. 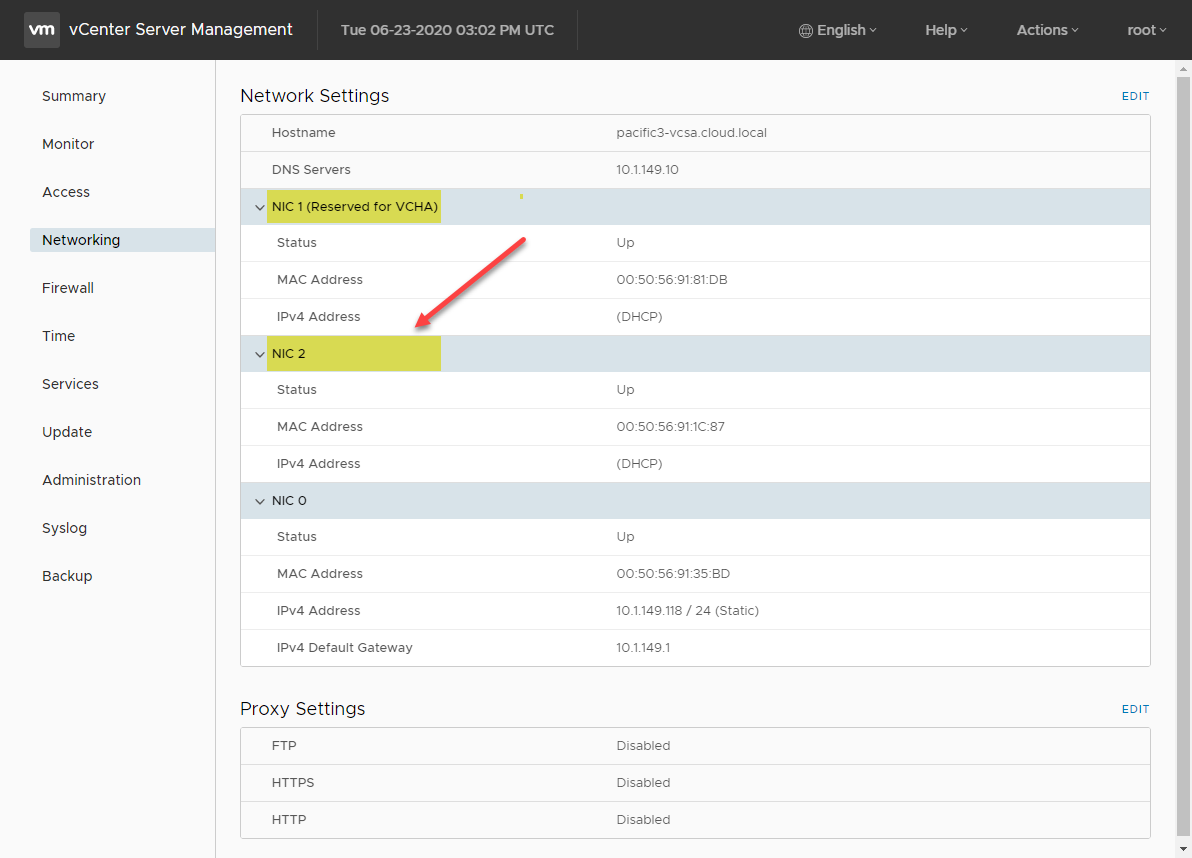 Today’s IT operation’s processes are all about DevOps. Tracking changes and versions of various infrastructure is extremely critical, especially in larger environments where there may be many different IT Ops personnel and many different changes being made in the environment. With VMware vCenter Server 7, VMware has integrated change control and versioning into the process of VM templates. It makes a lot of sense to track changes to templates as these can often change due to updates or other needs as they arise in the environment.

Below, I am cloning the TestVM virtual machine to a content library template. 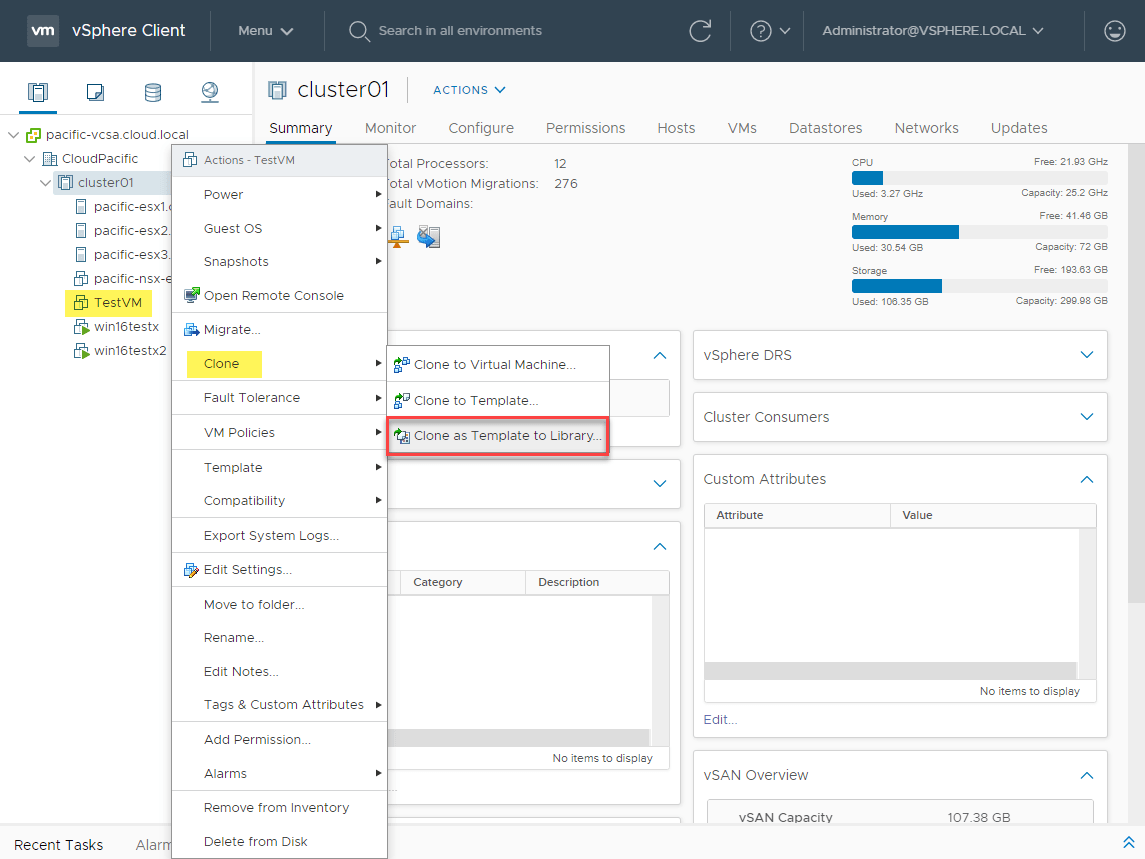 Using the Clone as Template to Library functionality

Once the VM is cloned to the content library as a template, you will have the Versioning functionality available. Note the Check out VM from this template button. 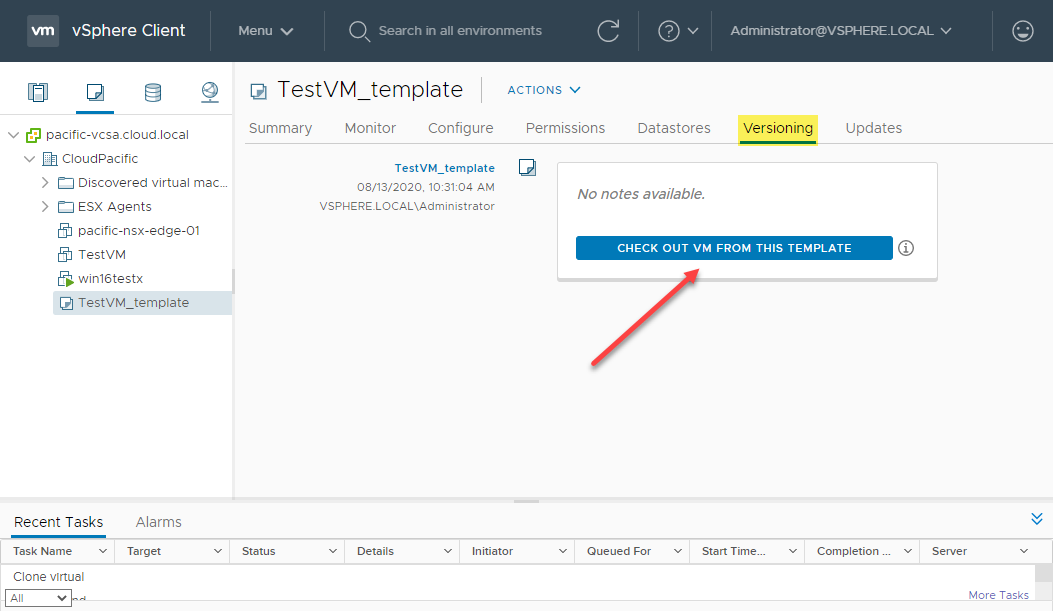 New template management provides versioning inside of the vSphere Client

Now, vSphere administrators can see changes tracked for the template as it is checked out using the built-in version control. 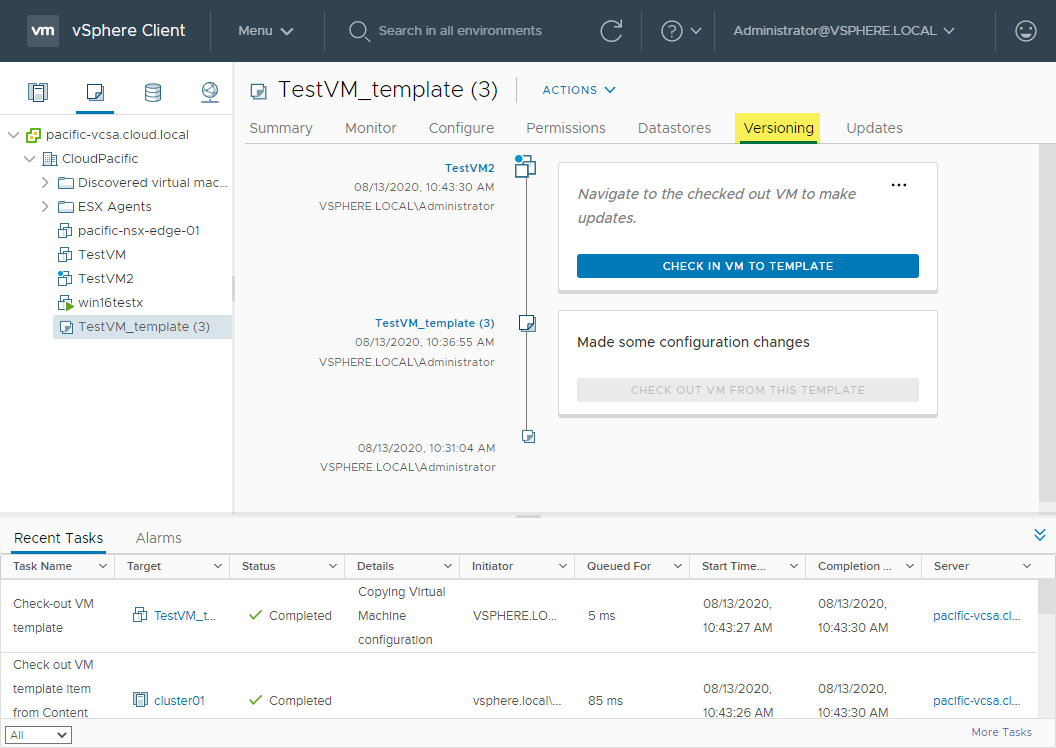 Changes to VM templates are tracked natively inside vSphere