A new tool creating quite a bit of buzz is the VMware Event Broker Appliance (VEBA). What is it, and how is it used?

Organizations worldwide are in the middle of a paradigm shift in provisioning, managing, monitoring, and configuring their infrastructure. The cloud revolution has prompted a change in the way businesses think about infrastructure, leading to Infrastructure-as-Code and DevOps processes that blur the lines between development and IT operations.

While cloud operations have been driven by DevOps processes for some time now, on-premises tools and techniques have lagged behind the cloud. As a result, VMware admins are on a journey of adopting cloud-native processes on-premises.

So, what is the VMware Event Broker Appliance (VEBA)? VEBA is released as a VMware Fling. VMware Flings are unofficial VMware solutions created by VMware software engineers without production support. However, they are powerful and often used in production environments for various use cases. 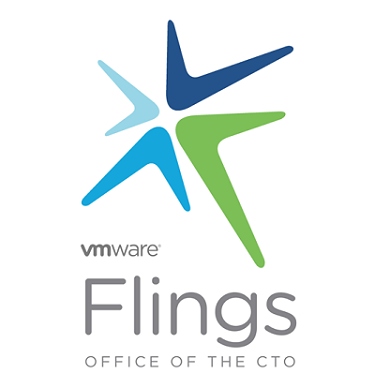 Popular and helpful VMware Flings often eventually make it to production-supported solutions. A great example is the VMware OS Optimization Tool used for years by Horizon administrators. It has now become officially supported with the release of VMware Horizon 2111. So, case in point, VMware Flings often produce viable solutions that eventually become production-supported.

The VMware Event Broker Appliance (VEBA) is a VMware Community open source project released as a VMware Fling in 2019. It enables customers to create event-driven automation using vCenter Server Events easily. The idea behind the Fling is simple. It brings modern technologies and innovations out of the cloud-native world, like Kubernetes, to help cloud admins build event-driven automation based on vCenter Server events.

Take Advantage of Event-Driven Automation in a VMware vSphere Environment

Event-driven automation with vCenter Server is compelling. Today, vCenter Server ships with over 1800+ events out-of-the-box. These include events that represent state changes like a virtual machine created, a host added, a VM getting powered-on or powered-off. It can also consist of vCenter Server alarms that are more metric-based. Metric-based alarms consist of alarms driven from thresholds. For example, a CPU is running above a certain threshold, a datastore is under a certain percentage of free space.

The capabilities provided around vCenter events have not changed much in the past few years. However, organizations today are looking for more robust and modernized automation tools and capabilities to fit in with current cloud-driven automation capabilities.

The VEBA solution takes the traditional events supplied by vCenter Server through the vSphere Client and augments the in-box capabilities with a cloud-native approach. What use cases does the VEBA solution help customers solve?

VEBA targets many different use cases in customer environments. Common use cases that are solved using VEBA include:

In addition to the official use cases listed above, imagination is the only limitation to designing functions that carry out tasks in customer VMware environments. When you look at the VEBA community site, you see functions that can do the following: 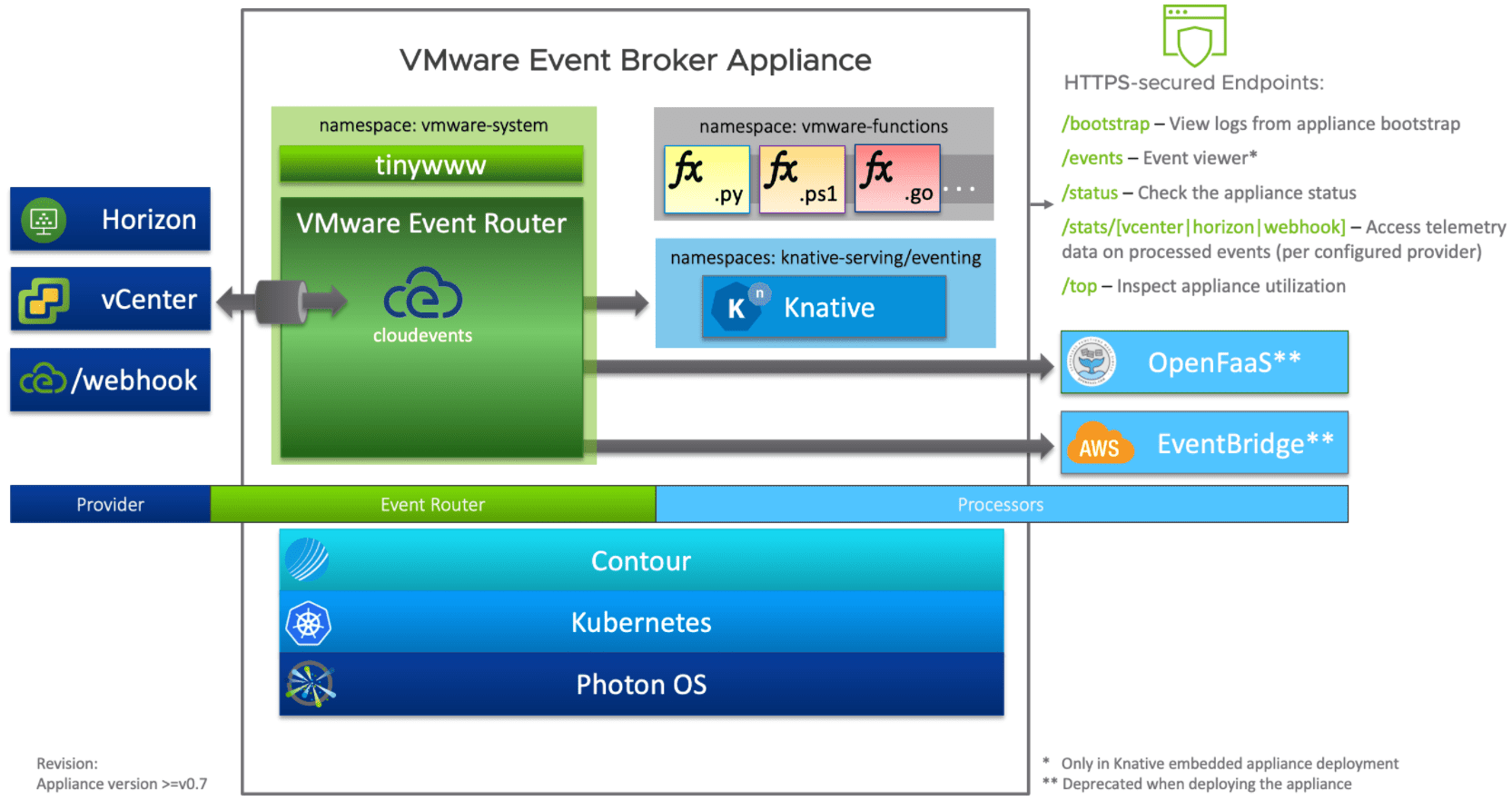 The VMware Event Broker Appliance is deployed as a single virtual machine in its current form, with no option for scale-out or high availability. However, it is built on the principles of a microservices architecture running on Kubernetes. Individual services communicate using TCP/IP. Most of the communication happens “inside the box” of the VM.

High availability options such as Kubernetes cluster capabilities appear to be on the roadmap for future VMware Event Broker Appliance releases. However, while this increases the availability of the capabilities VEBA provides, it will also increase the architectural complexity of the solution.

VEBA uses Knative – What is it?

One of the powerful components of VMware Event Broker Appliance is its use of the Knative project. What is Knative? It is a project to provide a more approachable abstraction to Kubernetes. As you know, if you have worked with Kubernetes for any time, it is a robust platform solution. It has now transitioned from a container orchestration tool to a powerful API interface to a cloud-native architecture.

At its best, many feel like working with Kubernetes requires very low-level interactions, including YAML files, deployments, ingress controllers, and other components. Knative helps abstract the lower reaches of Kubernetes and helps keep the focus on the applications.

The process to deploy the VMware Event Broker Appliance (VEBA) is straightforward. The first thing you need to do is download the appliance OVA file from the VMware Flings site. You can do that here: 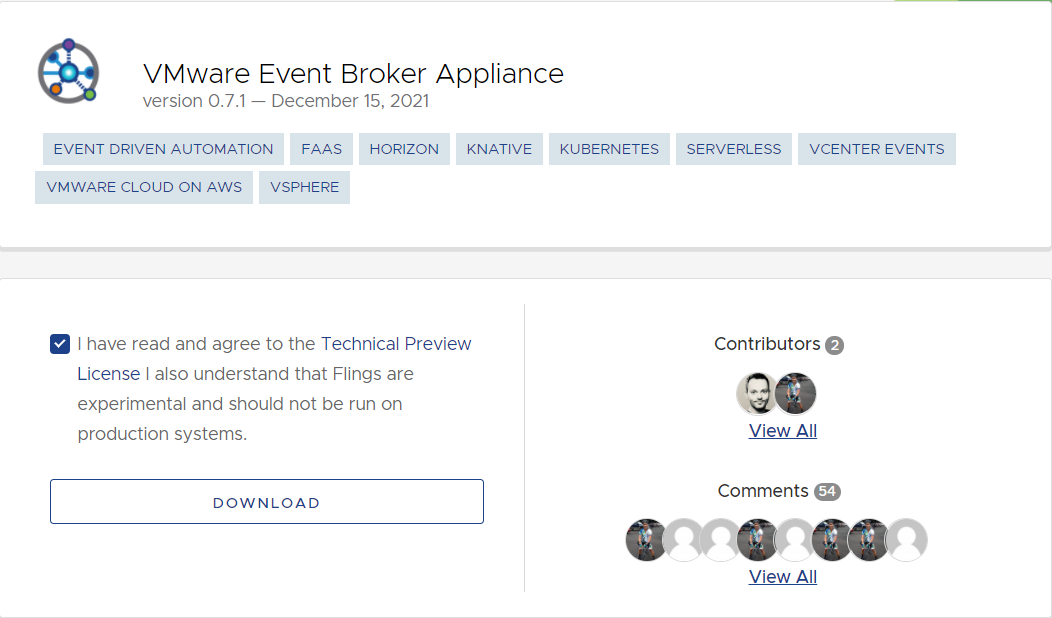 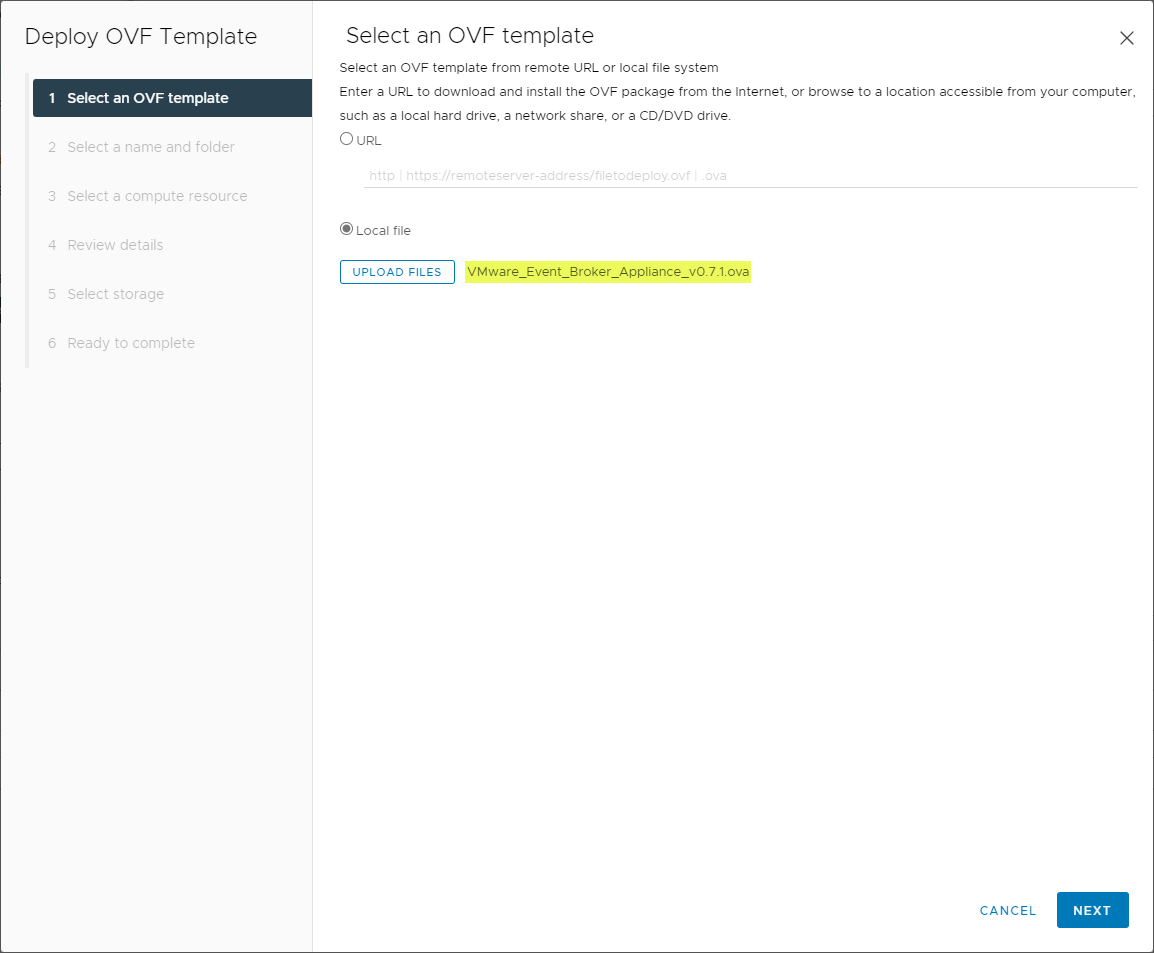 Specify the name of the appliance and the folder in your vSphere inventory. 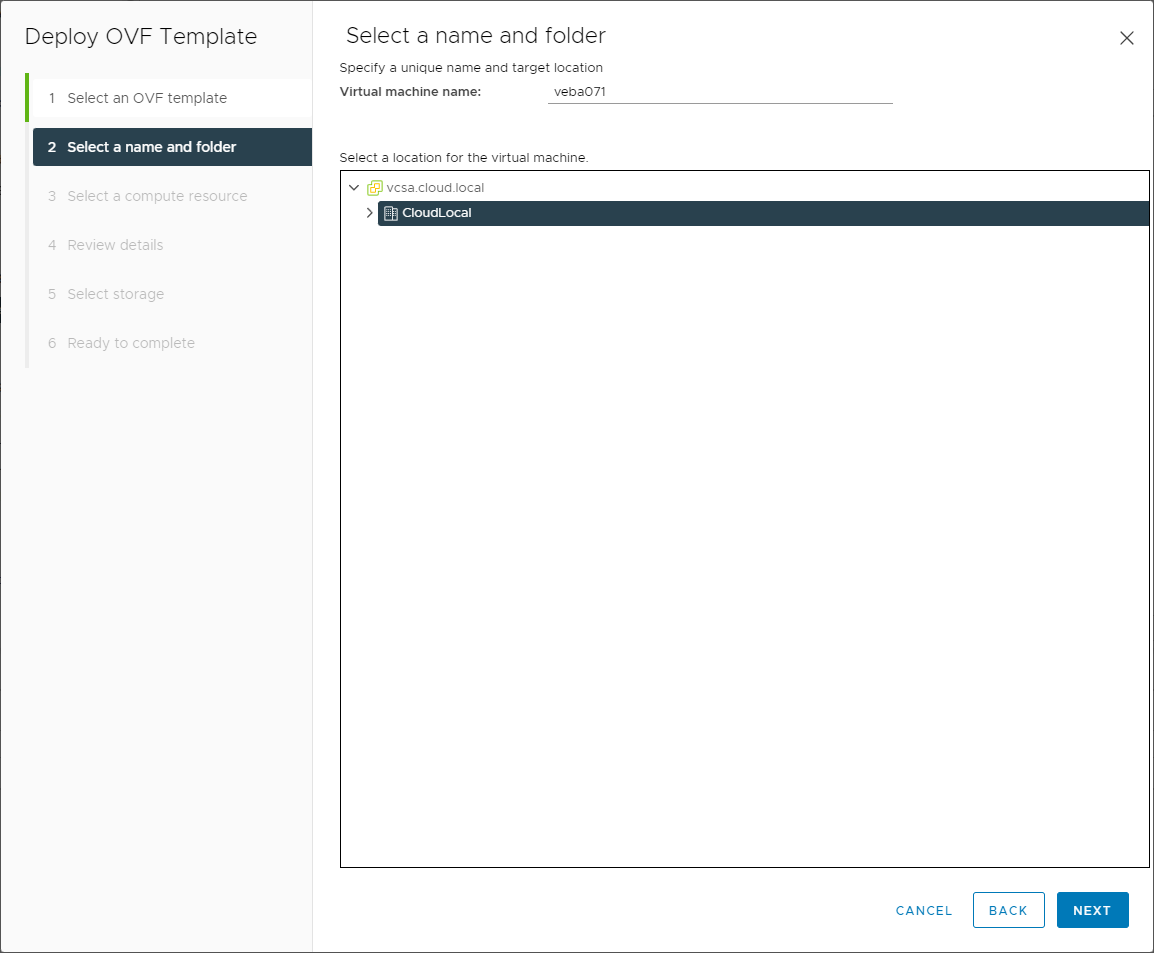 Configure the name and folder location in vSphere inventory

Select a compute resource for the OVA appliance deployment in your vSphere SDDC. 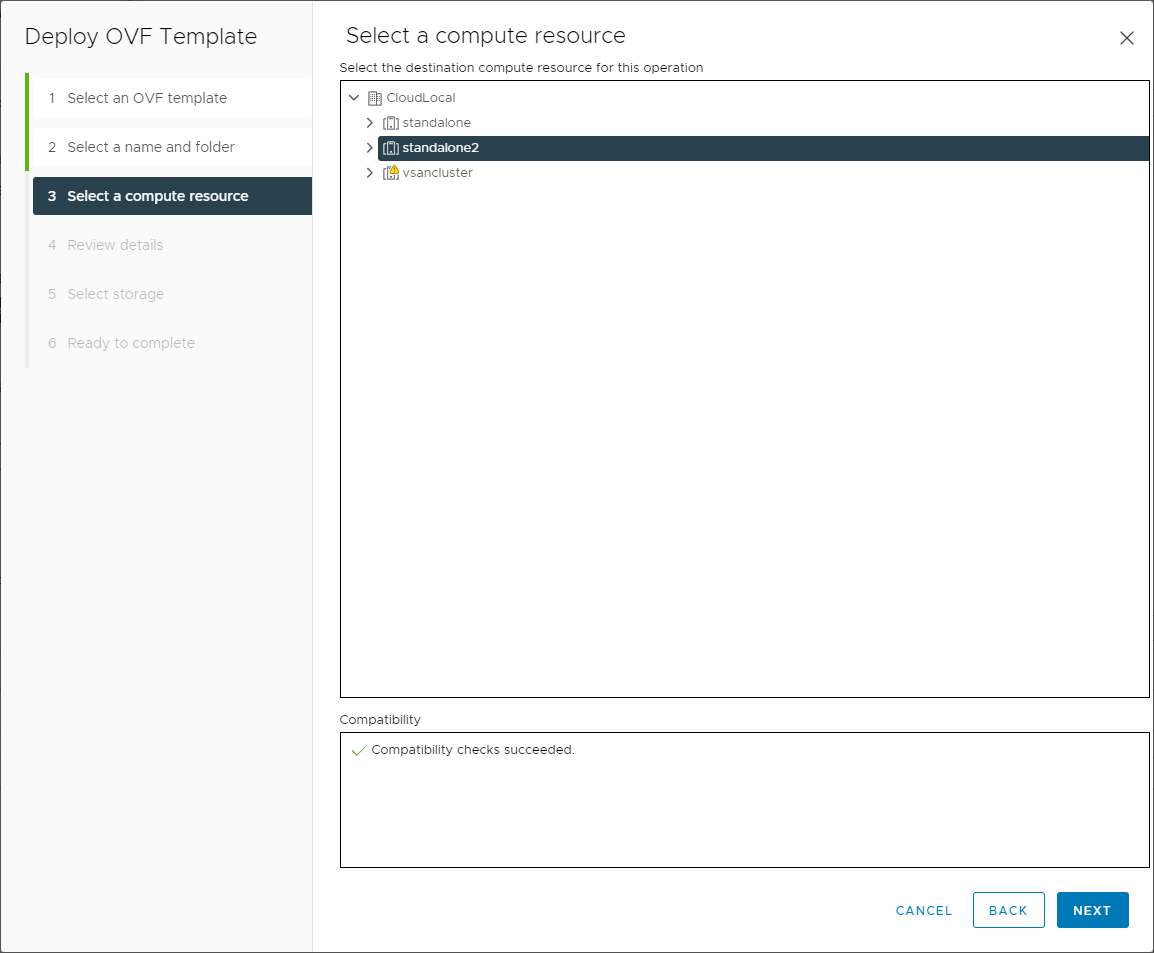 Select the compute resource to deploy your VEBA OVA

Review the initial details of the OVA deployment for the VMware Event Broker Appliance. 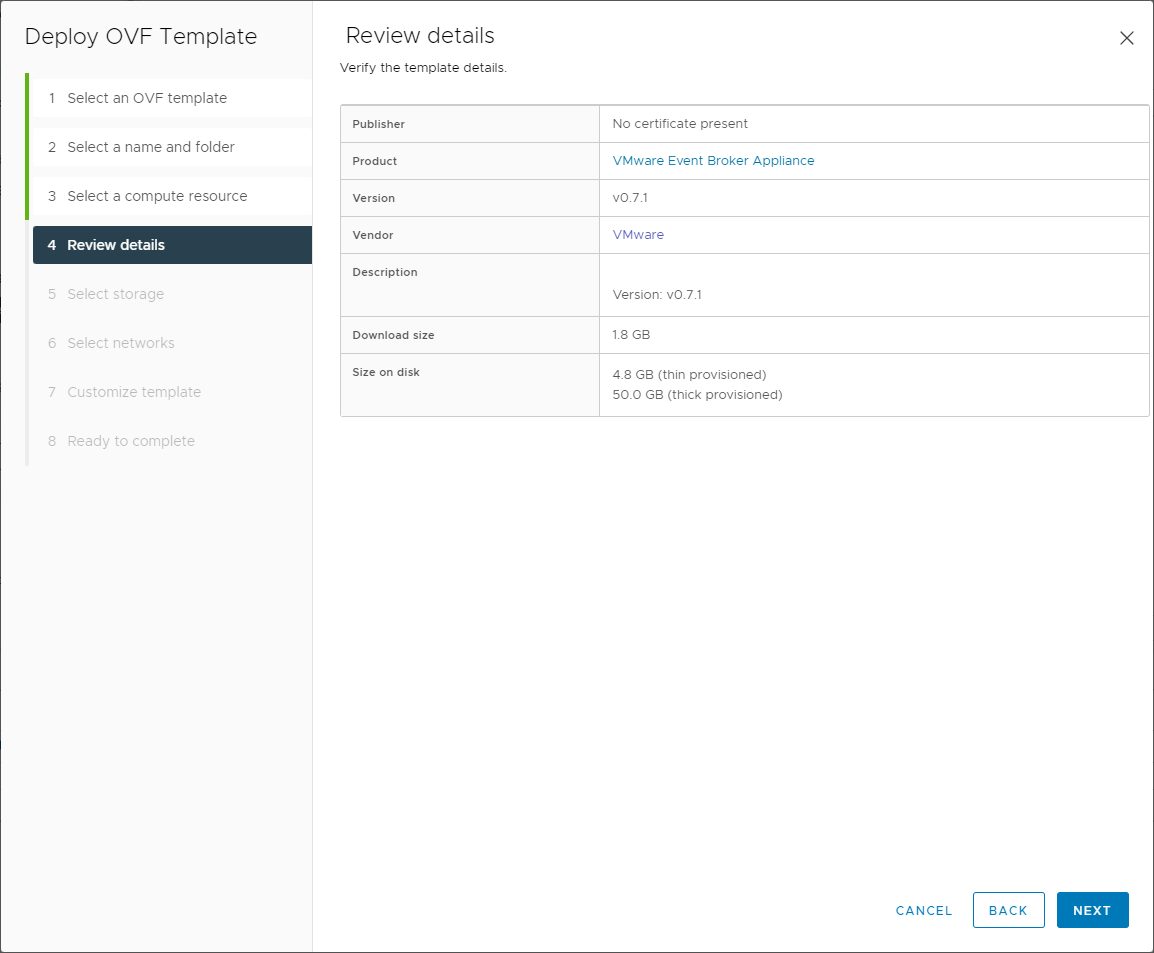 Review the details of the initial OVA deployment

Select the vSphere datastore you want to house your VMware Event Broker Appliance deployment and set the VM Storage policy. 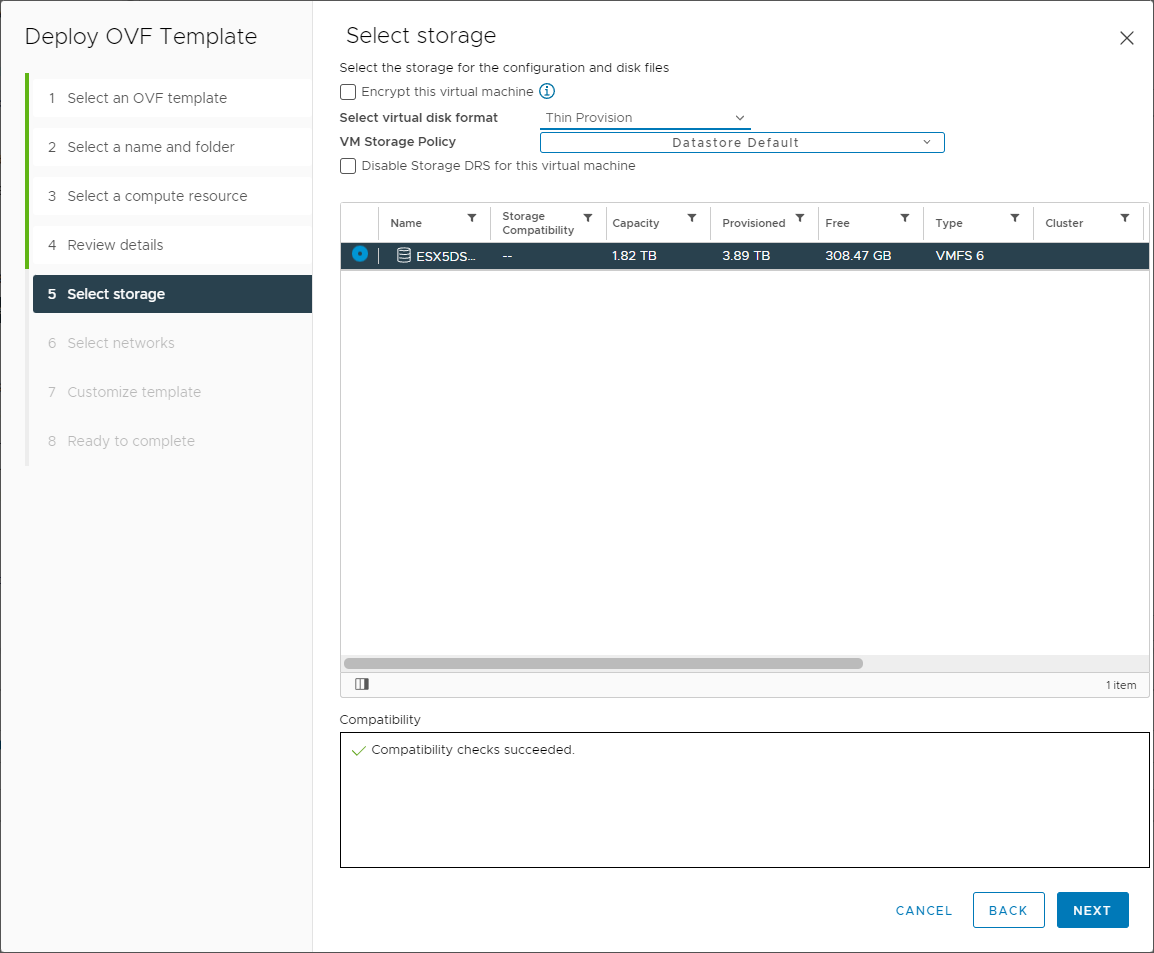 Select the storage for your VEBA OVA deployment 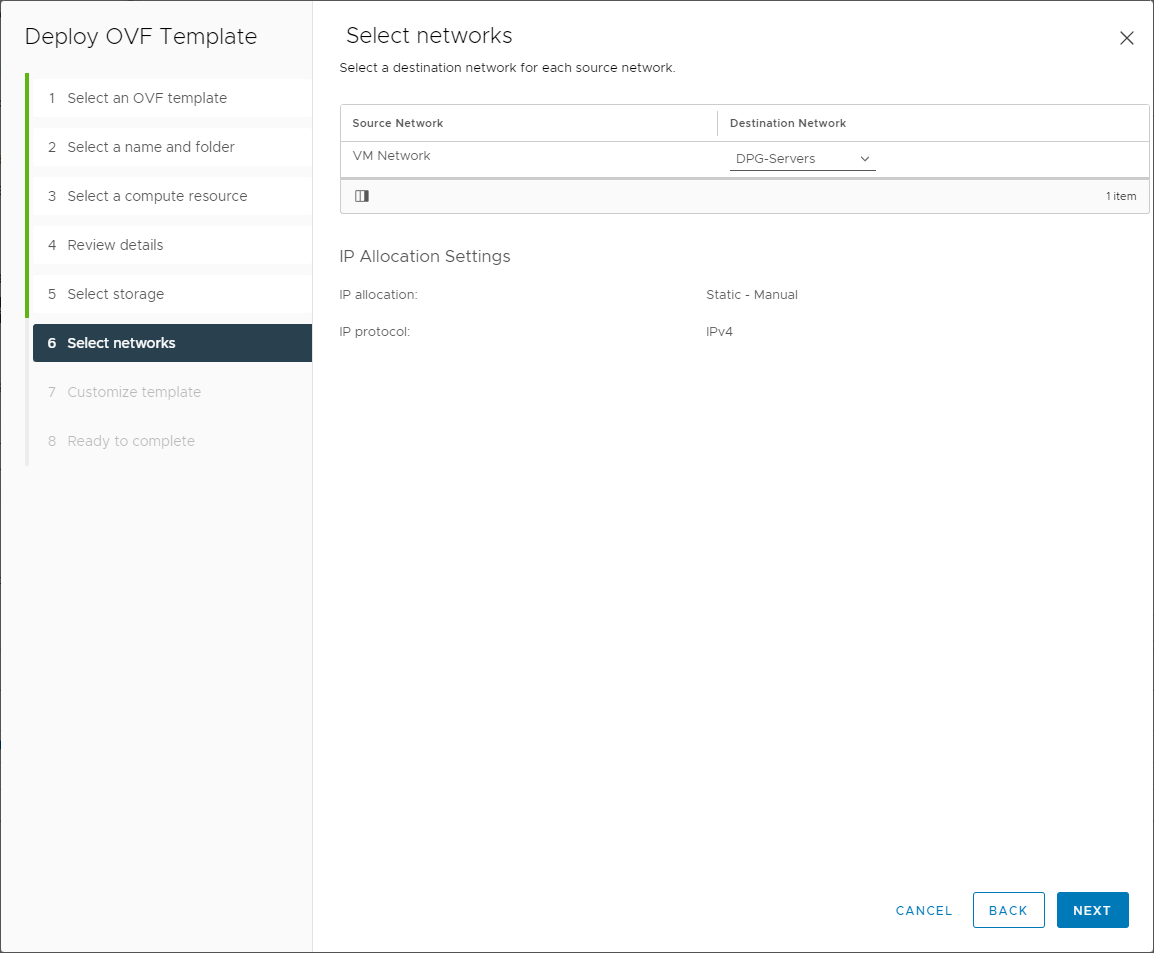 Select a vSphere virtual network for your VEBA appliance 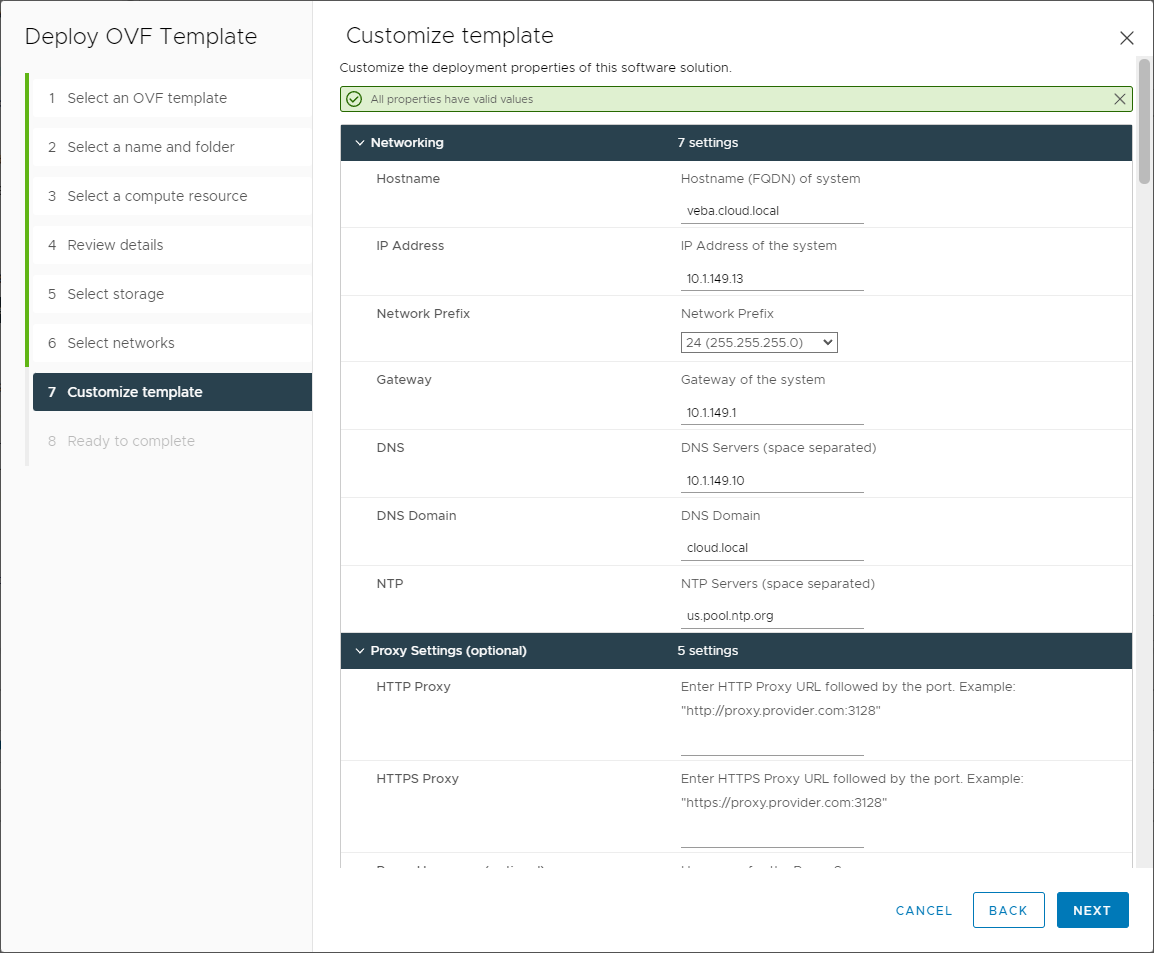 Another section of the customised template screen showing the vCenter Server and VMware Horizon configuration. 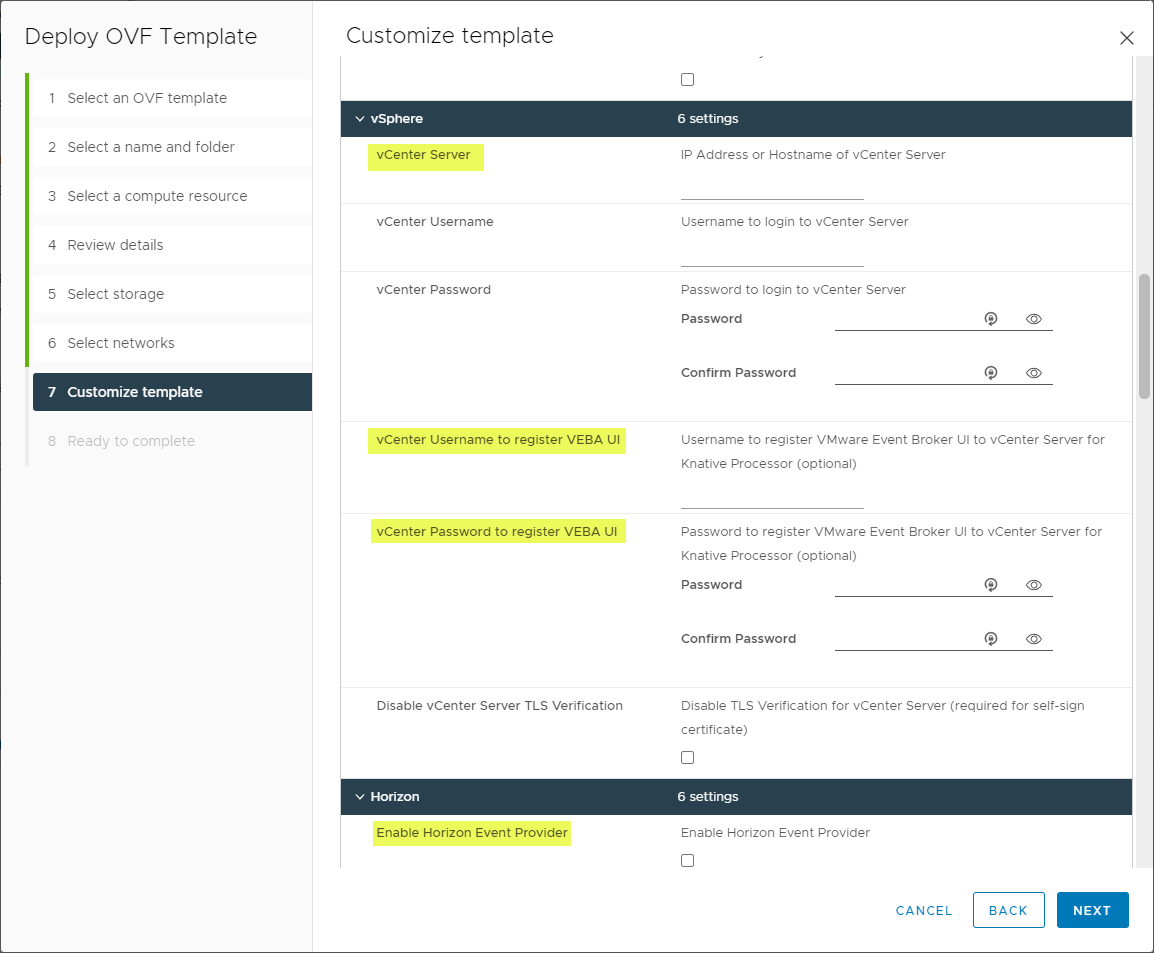 Review and Finish-out the deployment of the appliance. 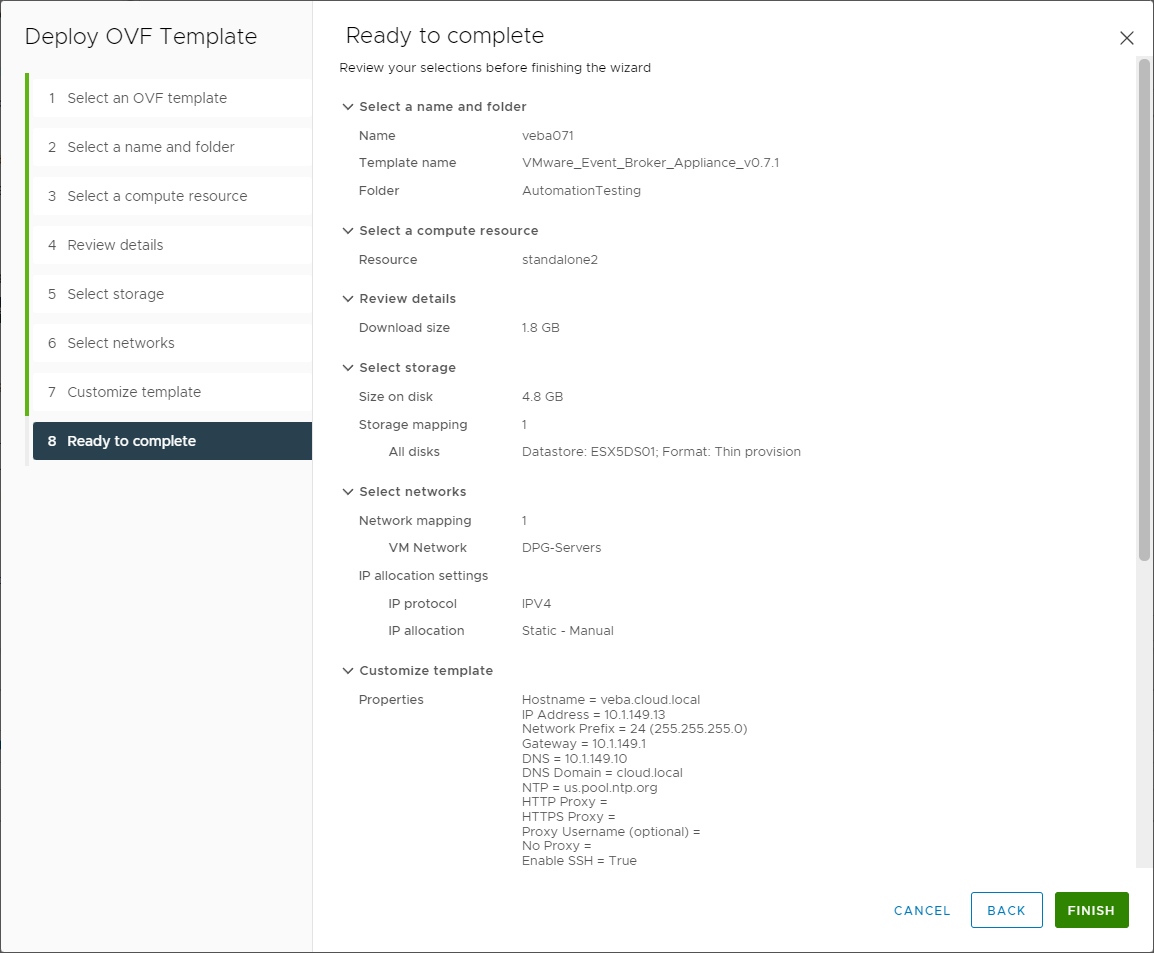 Finish the deployment of the VEBA OVA appliance

Now that we have the VEBA appliance deployed, we can clone down the official VEBA repo, providing the example code and functions for deploying to a local VEBA instance.

The official open-source code for the VMware Event Broker Appliance (VEBA) is hosted on Github. To get started with event-driven automation in your local vSphere SDDC, you first need to clone down the repository locally. Doing this allows viewing code examples and using the prebuilt examples as templates to deploy your own event-driven notifications.

To view the official code repository for VEBA, you can navigate to the Github page here:

To clone the repo from the command line, enter the following:

Cloning the official VEBA repo to pull down the examples

The workflow that we will perform to get to the point of testing the function for event-driven automation involves:

For example, let’s customize and upload a function to the VMware Event Broker Appliance. It will involve creating a Docker container with a function to send an email for the triggered alert. First, let’s look at building the Docker container. In the cloned VEBA repo, you will find the knative > powershell > kn-ps-email folder under the examples folder in the parent vcenter-event-broker-appliance folder. Before customizing the files included in the root of the kn-ps-email folder, we can go ahead and test how the function works using the test folder.

Viewing the Dockerfile for the email function for VEBA

The test folder contains files that we can test the functionality. It is a great way to get familiar with the VEBA process and build containers to deploy the functions. To see how we do this, first, we need to go ahead and build a default container. Again, you don’t have to worry about customizing anything for your email server just yet.

To build the container with Docker, use the following command:

We use a Docker Hub user with the command above and name and tag the container. ***Note*** don’t forget the trailing dot. The container builds successfully. At this point, it is still a local container since we have not pushed the container to the Docker registry.

After creating the container, we can push the container to the Docker registry. As we will detail later, you may most likely be fine using the default container referenced in the function.yaml file. However, the upload process is needed if you need a custom container. Uploading to Docker Hub will be the option many may want to use if you have no local registry running. To push your container to the Docker registry, use the command:

Now that we have the Docker container built from the Dockerfile and uploaded to the Docker registry, we can use the sample test file to test the notification alert payload sent to the function. Change your focus into the test folder from the command line. You will now want to edit your docker-test-env-variable file to point to a real email server. You can even use something like smtp.gmail.com to test the email delivery.

You should get a successful test with a StatusCode 200. This result means the email was sent successfully. I received the email to my Gmail account, as you can see below.

Now, we can finish out the configuration to deploy the function code to your local VEBA.

Deploy the Event-Driven Function to your VEBA Appliance

You will copy the config file to your local development workstation to the special .kube folder where kubectl looks for the configuration file. In Windows, this is created under the user profile directory.

Once you have this file copied down, you should be able to run normal kubectl commands against your VMware Event Broker Appliance, like you would any other Kubernetes cluster.

Viewing pods on the VEBA appliance

We have already pushed our Docker container to the Docker Hub registry earlier in the walkthrough. This step is now crucial because the VMware Event Broker Appliance function needs to reach out and pull down the container.

Next, you need to update your email_secret.json file with your email configuration and create a Kubernetes secret that can be accessed from the function.

Now, to create the Kubernetes secret, use the following commands:

By default, the function deployment will filter on the VmRemovedEvent vCenter Server Event. If you wish to change this, update the subject field in the function.yaml to the desired event.

VEBA Fixes and Other Hints to Functions

The latest version of VEBA has introduced many fixes to the platform as it continues to evolve. The December 2021 release includes:

To protect your VMware environment, Altaro offers the ultimate VMware backup service to secure backup quickly and replicate your virtual machines. We work hard perpetually to give our customers confidence in their backup strategy.

Plus, you can visit our VMware blog to keep up with the latest articles and news on VMware.

The VMware Event Broker appliance truly allows customers to unlock the hidden potential of events in their vSphere-powered SDDC and create event-driven automation. It includes support for both vCenter Server and VMware Horizon events. As shown, it is easily deployed using the prebuilt OVA appliance, and functions are readily available in the community.

Be sure to check out the official sites for VEBA, including:

VEBA is a Photon OS-based solution running Kubernetes that uses Knative to power event-driven alerting, notifications, automation, and other workflows

What are the VMware vSphere system requirements?

Yes. Customers can make use of myriads of community-driven functions to power their event-driven automation

How to install VEBA?

The appliance is a simple OVA deployment. Functions can be developed locally and applied to the Kubernetes cluster running on the VEBA appliance.

What are the pre-built functions of VEBA?

There are many prebuilt functions, including event-based and metric-based functions that allow proactive automation based on vCenter Server events. 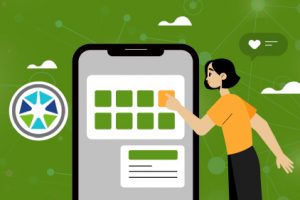 How to Use Tanzu for Free!