With the release of vSphere 7, VMware partitions are changed in the vSphere 7 layouts to make it more versatile and to allow additional VMware and third-party solutions to be installed on it. The VMware partition sizes in prior versions of vSphere 6.x were fixed and static which may prevent the installation of additional solutions such as vSAN, NSX-T, Tanzu as well as some third-party integrations. In response to these constraints, VMware modified the partition sizes in the vSphere 7 layout, increasing the size of boot banks and making them easier to extend.

In this article, we’ll learn about the vSphere 7 ESXi boot media partitions, important differences between ESXi 6 and ESXi 7, ESXi 7 supported boot media and upgrading to ESXi 7 with a new partition layout. Let’s get into it!

The ESX-OSData partition is separated into two high-level data types:

Note that a VMFS datastore is automatically established for storing virtual machine data if the boot media is greater than 128GB. 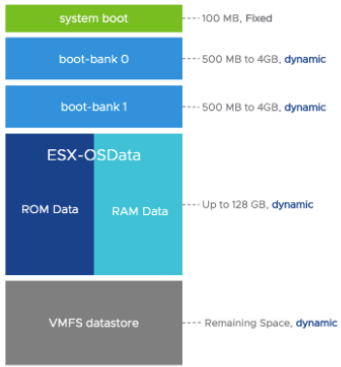 Keep in mind that USB and SD devices are no longer supported starting vSphere 7 Update 3 following a large number of issues encountered by customers.

Key Changes Between the ESXi 6 And ESXi 7

The ESX-OSData partition change is an important one in the context of SD cards and USB devices since all non-boot partitions (such as the small and big core-dump, locker, and scratch disc ) have been consolidated into this new VMFS-L partition. 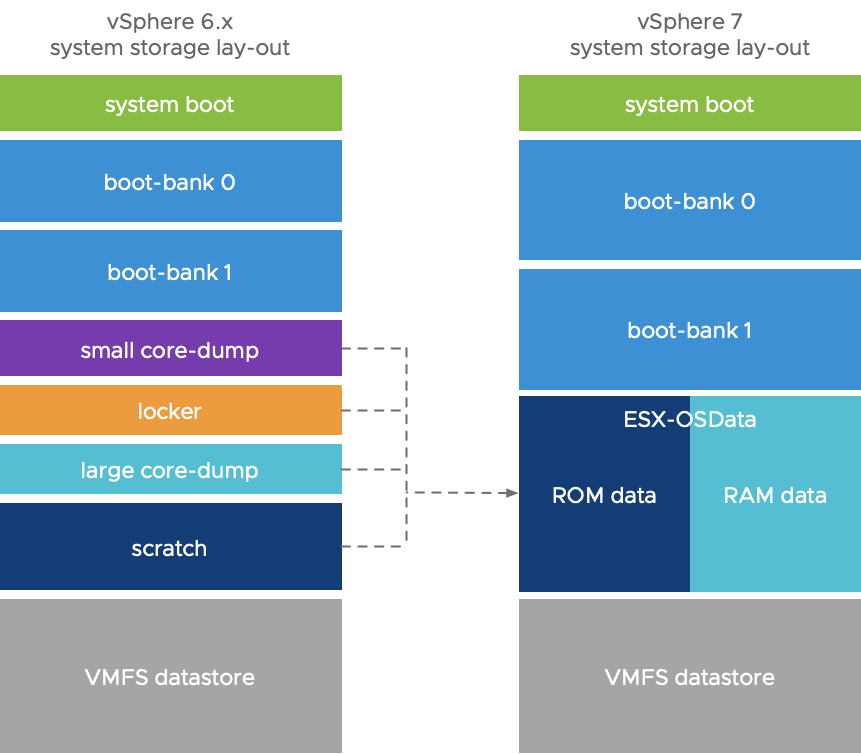 Due to an increase in IO requests delivered to the ESX-OSData partition, it must be built on a high endurance persistent storage device. Multiple variables included with ESXi 7.x have resulted in higher IO requests, including:

ESXi could previously be installed on 1 GB USB sticks. ESXi 7.0, on the other hand, increases these needs to 3.72GB of storage space to be precise.

However, the recommended storage capacity is 32 GB. What’s noteworthy is that, while the boot partition’s size (100MB) remains constant, the sizes of the other VMware partitions vary depending on the kind of installation media used.

The VMware examples demonstrate media sizes ranging from 4GB to 128GB and beyond, and as you can see, if you have an SSD drive with more than 128GB, the remaining space may be used to create a local datastore in ESXi partitions.

As you may be aware, starting with vSphere 7 Update 3, the use of standalone SD cards or USB devices is deprecated in the vSphere 7 layout. In which instance the system will display warnings when you use them. It is suggested (mandatory eventually) that you store the ESX-OSData partition on a locally attached persistent storage device.

A 32 GB disc is required when booting from a local drive, SAN or iSCSI LUN to create system storage volumes in ESXi partitions. A VMware Tools partition is created automatically on the RAM disc starting with ESXi 7 Update 3, and warnings appear to prevent you from establishing ESXi partitions on flash media devices other than the boot bank partitions. Other ways for improving the performance of an ESXi 7.0 installation include:

Upgrading to ESXi 7 U3 with SD card

We’ve already discussed that starting with vSphere 7 Update 3, the use of standalone SD cards or USB devices is deprecated in the vSphere 7 layout. The system will continue to run with warnings if they are used but it is best that you store the ESX-OSData partition on a locally attached persistent storage device.

Please follow the procedures below to upgrade ESXi 6.7 with a standalone SD card or USB device to ESXi 7 with an extra disc. If the ESXi 6.7 host does not have persistent storage:

If the ESXi host has previously been updated to ESXi 7.x and is operating from a USB or SD card.

When a 4 GB boot device is used and no local disc is discovered, ESXi enters a state known as ‘degraded mode.’ In summary, the degraded mode is a condition in which logs and states may not be permanent, causing boot up to be delayed as a result.

Note that if the OSData partition is on an HDD or superior media, the system in the vSphere 7 layout will not enter in degraded mode. 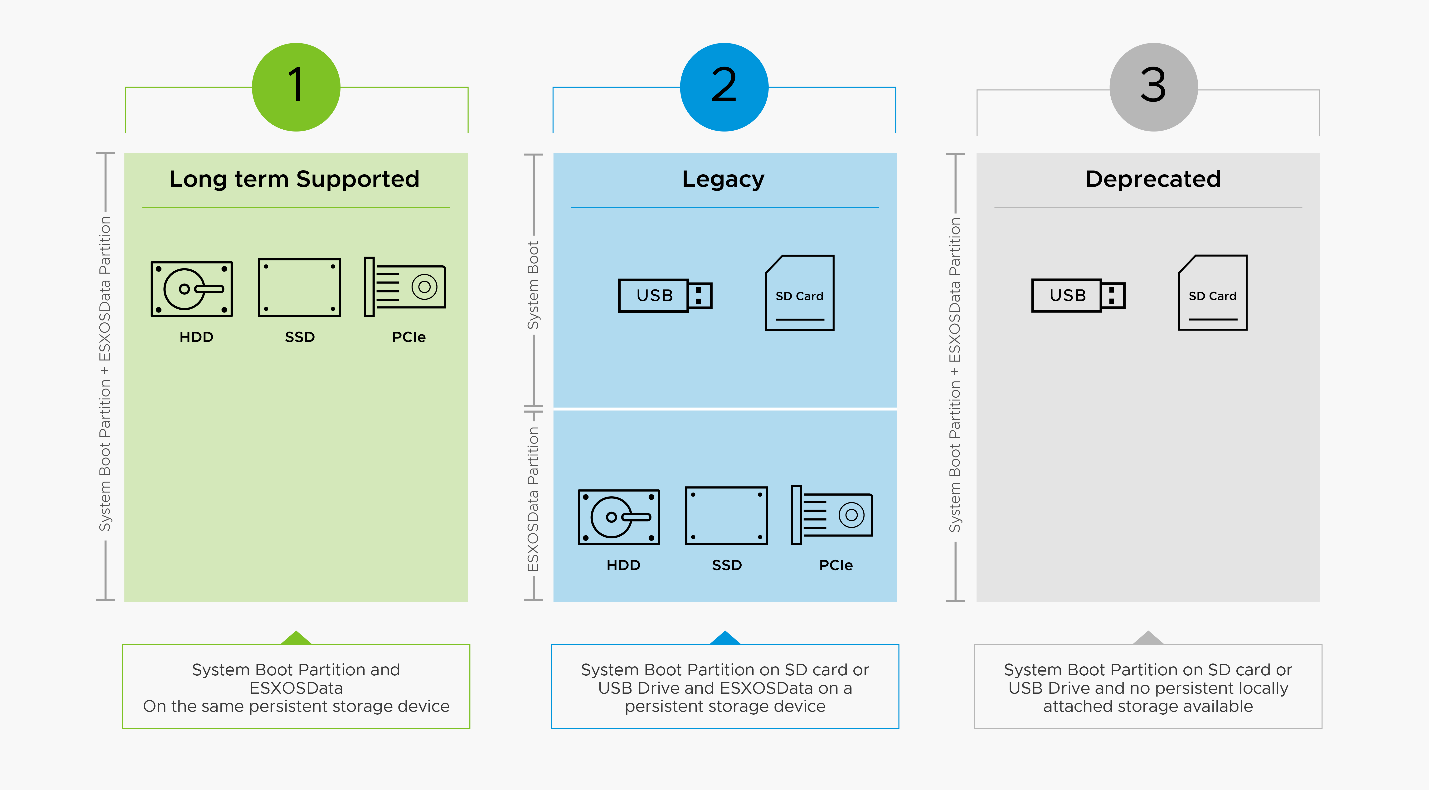 Figure: The only vSphere 7 layout that will remain supported is the use of persistent storage devices only.

A sysalert appears in case you enter degraded mode:

ALERT: No persistent storage for system logs and data is available. Because ESX has a limited amount of system storage capacity, logs and system data will be lost in the vSphere 7 layout if the server is rebooted. To fix this, you’ll need to install a local disc or flash device and follow the steps in KB article 77009.

If you don’t want to use an SD card or USB device anymore in the vSphere 7 layout, you can:

To protect your VMware environment, Altaro offers the ultimate VMware backup service to secure backup quickly and replicate your virtual machines. We work hard perpetually to give our customers confidence in their backup strategy.

Plus, you can visit our VMware blog to keep up with the latest articles and news on VMware.

While the new vSphere 7 layout will certainly bring hardship to customers with a large fleet of hypervisors installed on SD cards, it also introduces more flexibility to improve the integration of VMware and third-party solutions into the vSphere hypervisor.

With the new vSphere 7 layout, VMware is discontinuing support for Boot configuration with only an SD card, USB drive, and without a persistent device with the introduction of vSphere 7 Update 3.

Because these will not be supported in future vSphere versions, customers are encouraged to stop using SD cards and USB devices entirely due to the vSphere 7 layout. If that isn’t possible right now, make sure you have at least 8GB SD cards or USB drives on hand, as well as a minimum of 32 GB locally connected high endurance device for ESX-OSData Partition.

vSphere 7.0 was released in April 2020 with many new features and enhancements and some of them are: Kubernetes integration support: Kubernetes clusters can be run, provisioned, and managed on top of vSphere via the Kubernetes interface. Updated vCenter Server: Windows vCenter Server and external PSC is deprecated. vCenter Updated Manager is renamed to vSphere Lifecycle Manager (vLCM). Virtual Hardware v17: New virtual hardware is known as virtual hardware version 17. Updated vSAN: It simplifies provisioning and both file and block storage can be used. A vSphere add-on for Kubernetes is enabled.

HTML5-based vSphere client is introduced in vSphere 7.0 and ESXi 7.0 can be accessed with it.

Yes, it’s free but can’t be managed by vCenter and max 2 physical CPUs and 8 vCPU can be used per VM.