A paradigm shift is happening in the technology industry across the board as businesses focus on modernizing their applications. Modernizing applications generally involves developing microservices that run in containerized workloads. Kubernetes has emerged as the clear winner in this space and the defacto standard of container orchestration. Businesses are now focusing on how they can implement and use Kubernetes-driven containers for their microservices.

VMware has recognized this shift in the industry and has answered the demand of enterprise environments worldwide who need an effective, efficient, and easy way to provision Kubernetes as part of their application stack. The exciting new technology that made its way into vSphere 7 began with key announcements at VMworld 2019. VMware then announced Project Pacific as a complete overhaul and re-architecture of the vSphere platform. The new vSphere 7.0 architecture provides natively integrated Kubernetes as part of vSphere, rather than a bolt-on product or solution that integrates with vSphere.

VMware vSphere with Tanzu is significant in that organizations can now deploy Tanzu Kubernetes Grid clusters on top of native vSphere environments, using vSphere networking. It allows deploying TKG without the need for VMware Cloud Foundation or NSX-T. VMware Cloud Foundation is the fully-featured virtualization stack that allows deploying all components seamlessly and efficiently. However, for those running more traditional environments with vSphere Distributed Switches (vDS) for networking without NSX and NSX load balancers, requiring VCF for TKG cluster was undoubtedly a barrier to entry.

Instead of requiring a VMware NSX-T configuration for attaching your Tanzu Kubernetes clusters, customers can now connect TKG clusters directly to vSphere Distributed Switches (vDS). It reduces complexity for those who do not want or need VMware NSX-T only to provision TKG clusters in their environment. It also opens the door for using a third-party network load balancer to connect the environment to external services.

When configured with the native vSphere network stack using vSphere Distributed Switches, all hosts from the cluster connect to a vDS in the vSphere environment. It provides connectivity to Kubernetes workloads and control plane virtual machines and requires a third-party load balancer to provide connectivity. It contrasts with VMware NSX-T Data Center, which provides the built-in NSX Edge load balancer for connectivity to external services and users.

Configuring the vSphere Distributed Switch for use with vSphere with Tanzu is straightforward. It involves configuring the vDS with the appropriate port groups, including: 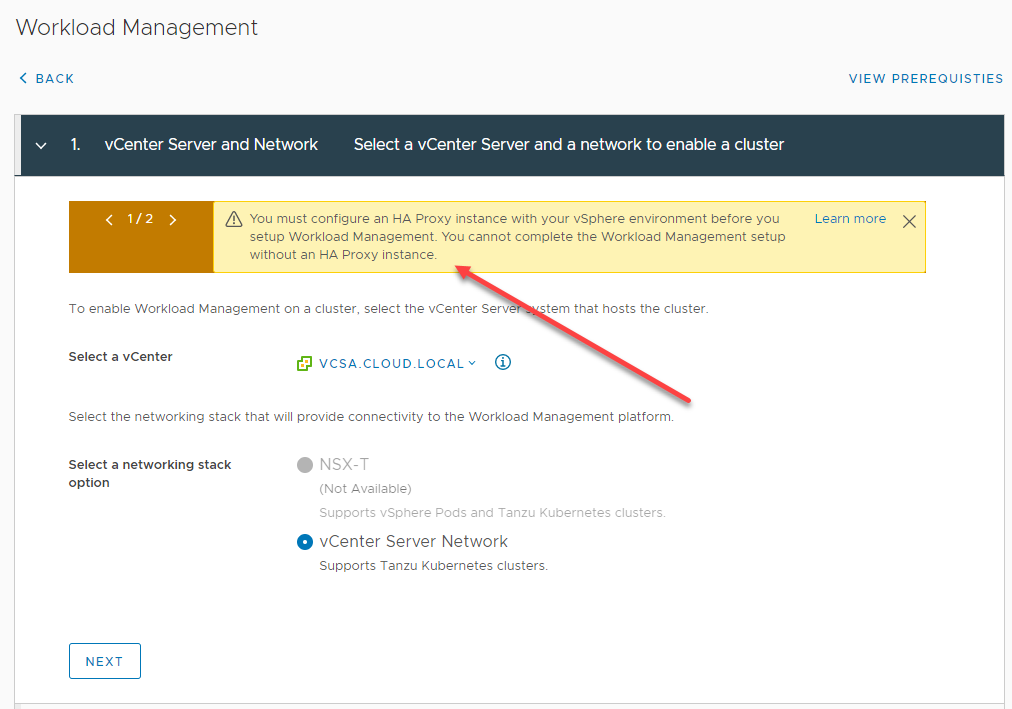 Using the Workload Management Wizard to deploy TKG with the HAProxy

Below is a high-level overview of the network architecture using vSphere with Tanzu. 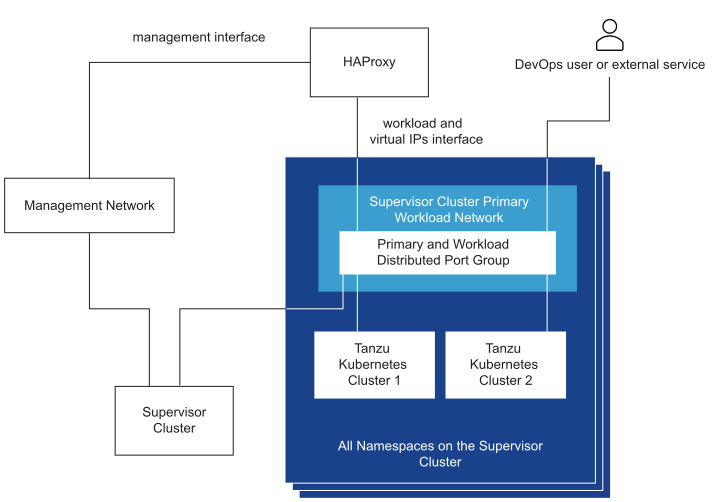 VMware vSphere with Tanzu supervisor cluster with one network 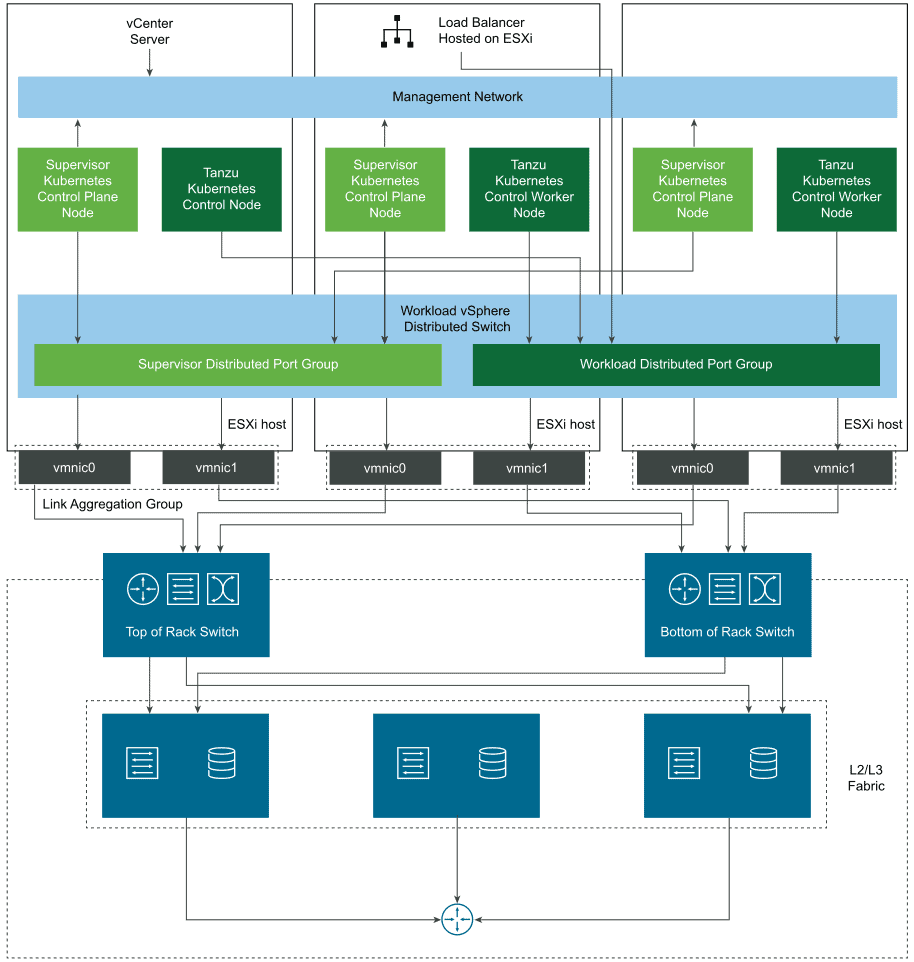 The new vSphere with Tanzu provides many options for existing customers to architect and deploy the networking stack to back the Tanzu Kubernetes Grid clusters. VMware still recommends using VMware Cloud Foundation (VCF) with Tanzu for fully-featured environments with complex requirements. It includes using the advanced networking features of VMware NSX-T. However, vSphere with Tanzu will allow organizations with traditional deployments to deploy Kubernetes in their environment quickly.

With each release of VMware vSphere, VMware has continued to improve the feature list of VMware vSAN to provide a “best of breed” modern storage solution capable of backing both traditional and modern applications, including those using Kubernetes. VMware vSphere 7 Update 1 is no exception here as VMware has added many new features in vSphere 7 Update 1 that help make vSAN 7 Update 1 the most powerful and capable release to date.

New features of vSAN 7 Update 1 include the following:

The vSAN Data Persistence Platform allows extending vSAN storage capabilities to support new modern applications’ persistent storage needs using Kubernetes. The new vSAN Data Persistence feature is a new framework that allows third-party partners to deploy their applications into the Supervisor Cluster. Partner-developed applications can directly access the vSAN storage layer using a technology VMware refers to as VMware Direct. It allows the applications to benefit from the direct access provided by the vSAN direct and have visibility into infrastructure-driven operations such as lifecycle management.

An added benefit of this new feature is that it makes use of native vSAN storage communication. It is not an extension of the file services provided by vSAN. All of the storage policy-based management (SPBM) benefits and features extend to HCI Mesh vSAN storage for consistent and predictable behaviour.

The new vSphere Lifecycle Manager (vLCM) is the replacement for the traditional vSphere Update Manager (VUM) that vSphere administrators have grown accustomed to for lifecycle management in vSphere. The vLCM tool is superior to VUM in many different ways and provides a declarative approach to managing your vSphere environment. The vSphere administrator can use the vLCM tool to create a desired state for the vSphere cluster, then vLCM brings the cluster into compliance with the “image” defined.

New with VMware vSAN 7 Update 1 is a new option for space-saving efficiency that many have wanted for quite some time. Before vSphere 7 Update 1, customers could not separate Deduplication and Compression as storage efficiency options for vSAN. It was a single option that only allowed selecting both technologies. However, new with vSAN 7 Update 1, customers now can choose Compression only as an option without the need to enable deduplication. 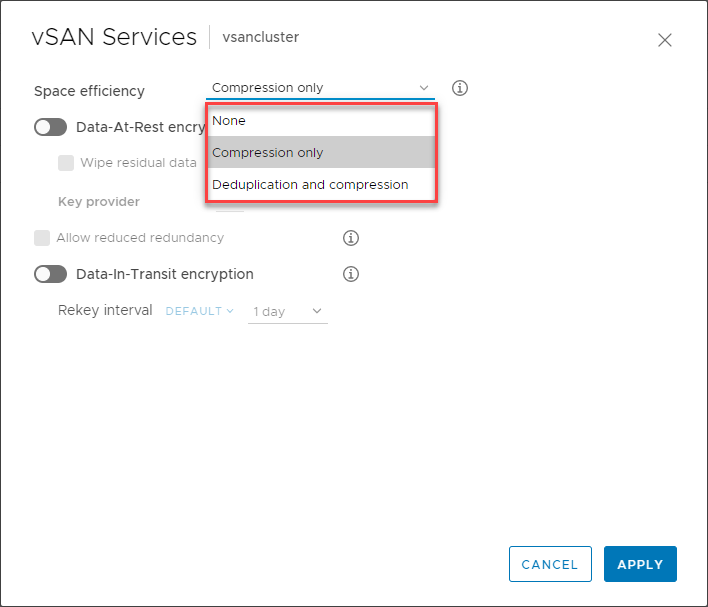 There were only a couple of real-world use cases that truly benefited from deduplication enabled along with compression, such as VDI environments. For most general-purpose workloads, deduplication brings little if any benefit. It also introduces CPU overhead and takes out an entire disk group with a single drive failure as VMware vSAN spreads the deduplication information across all drives in the disk group. The new option in vSAN 7 Update 1 gives organizations more granularity in the space efficiency technologies they choose for their particular environment that better matches specific use cases.

VMware vSAN 7 Update 1 has introduced a new welcomed feature to reduce the infrastructure footprint and resource needs. New with vSAN 7 Update 1, VMware has introduced the capability to have a shared witness node for multiple vSAN clusters. As you may know previously, each stretched vSAN cluster required a dedicated witness node for quorum. It will help to simplify the layout of vSAN infrastructure, especially in edge or ROBO installations. 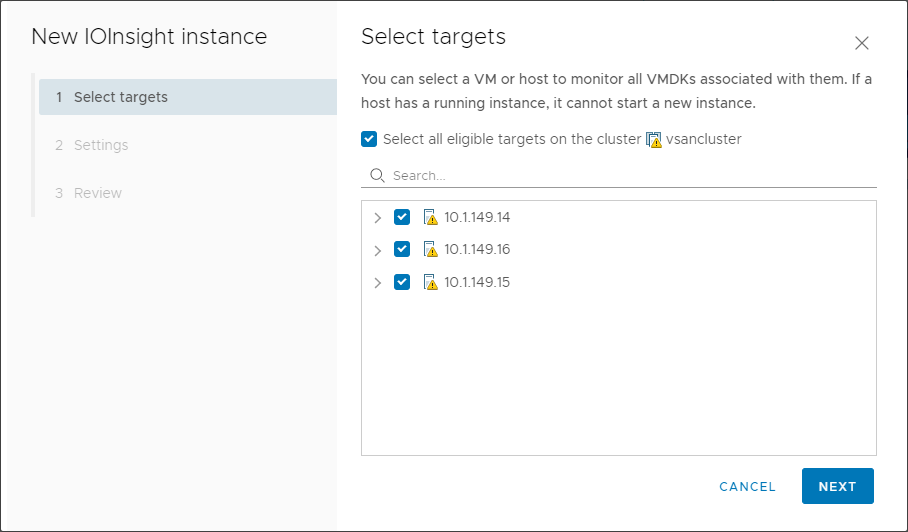 VMware Cloud Foundation v4.1 assumes the underlying benefits of technologies included in the VCF stack, including the new capabilities and features of vSAN 7 Update 1. One of those benefits is the vSAN data persistence platform. Now, with VCF v4.1, organizations can benefit from the framework for modern stateful service providers to integrate with vSAN for data persistence needs. Since VCF offers the most advanced features for organizations running modern applications using Kubernetes, the new underlying vSAN Data Persistence features allow third-party vendors to take full advantage of current capabilities with VCF.

With the new VMware Cloud Foundation Remote Clusters capability, organizations can extend a VCF workload domain to operate at a remote site separate from the central VCF management cluster. It opens up many possibilities for an edge, ROBO, and other locations to benefit from VCF capabilities. It will allow organizations to benefit from a seamless cloud operating model that includes the data center and remote edge locations. Benefits will include a standardized operations model and lifecycle management across locations.

Other features and benefits

There are many other additional features to note with VMware Cloud Foundation (VCF) v4.1. These include vVols as principal storage in the VCF Workload Domain, vRealize Suite 8 Automation, SDDC Manager enhancements, and VMware Skyline support for VCF. All of these new features allow VCF to keep pace with the latest innovations and functionality provided by VMware solutions.

The VMware vSphere 7 Update 1 release is massive, touting many new features and capabilities for your business. VMware has provided updates in all areas of the vSphere product, including traditional virtual machines and modern workloads running in Tanzu Kubernetes Grid clusters. The new vSphere with Tanzu offering will allow countless organizations to take advantage of Kubernetes without changing network architecture or introducing NSX-T to run Tanzu Kubernetes. Leveraging standard vSphere Distributed Switches and using a third-party load balancer solution, organizations can effectively provision vSphere with Tanzu in under an hour in most environments.

New features and capabilities in the more traditional vSphere data center will allow organizations to continue delivering performance and scalability in the traditional enterprise. VMware vSAN 7 Update 1 provides many new features that will enable organizations to more effectively use storage space, scale vSAN, and support modern workloads such as Kubernetes. Additionally, it reduces the infrastructure footprint needed to deploy vSAN 7 Update 1 stretched clusters by consolidating the witness node appliance for multiple vSAN clusters.

VMware Cloud Foundation (VCF) v4.1, in conjunction with VMware vSphere 7 Update 1, provides the next evolution of VCF functionality for organizations to continue delivering the full SDDC stack for running business-critical workloads in the environment. It includes taking advantage of the latest solution releases, such as vSAN 7 Update 1, and new features such as the VCF Remote Clusters, which will help reduce infrastructure and provide a seamless management experience of VCF across locations.

VMware vSphere 7 Update 1 is a landmark release in the evolution of VMware vSphere and will allow customers to provide the latest features, functionality, and capabilities intuitively. It will enable customers to concentrate on delivering applications to business stakeholders without worrying about the underlying infrastructure.