Of Storage, Protocols and Datastores – Part 2

In the first part of this series we looked at storage architectures namely SAN and NAS and related protocols including iSCSI and NFS. We also covered the types of datastore you can set up in a VMware environment. In today’s post, I’ll be going over the process of creating NFS shares and iSCSI luns on Windows Server 2012 which I will later provision as datastores.

Flexibility is one of the great things I like about virtualization. It removes a truck load of constraints when it comes to provisioning environments that would otherwise be impossible to roll out unless you enjoy access to unlimited hardware. Such is the case here. I’m using a Windows Server 2012 vm, in absence of the “real” thing, to mimic SAN and NAS services via the File and Storage Services server role.

Anyway, let’s get the ball rolling.

If you wish to replicate the steps described in this post, go ahead and add the features shown selected in the next screenshot using Server Manager. Needless to say, you must have Windows Server 2012 installed on either a virtual or a physical machine to accomplish this. 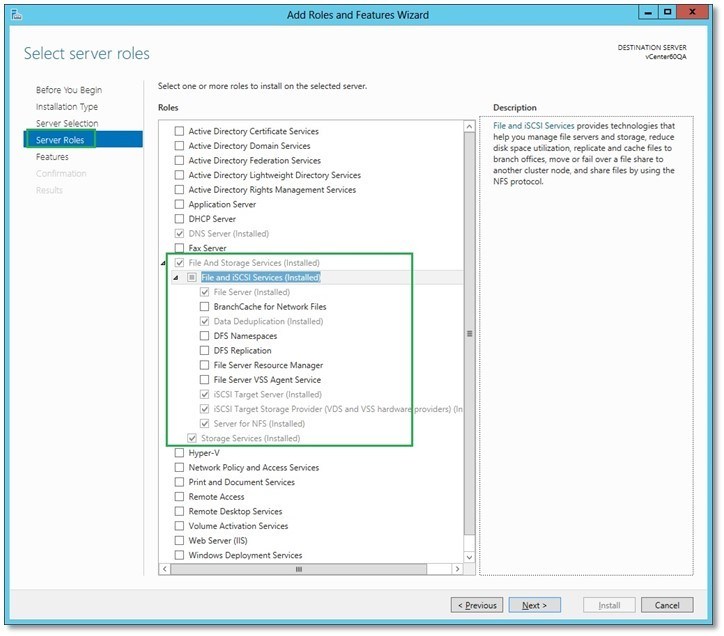 You should also put aside some disk space for the iSCSI and NFS resources we will create. In my case, I added 2 extra virtual disks (vmdks), one for iSCSI and another for NFS, to the Windows Server vm. After adding the disks, you just need to rescan storage to make sure the change is picked up. This is shown in the following screenshot. 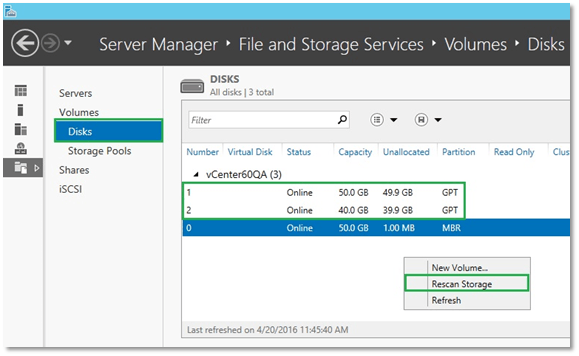 The easiest way to create an NFS share, once you’ve installed the Server for NFS feature in Windows Server, is as follows:

If you’re the impatient type and can’t wait to try this out, fire up a vSphere client, select an ESXi host and click on the Configuration tab. Next, select Storage from Hardware. In the right-hand pane, click on Add Storage and enter the details as shown next.

And there you have it, an NFS based datastore ready for use.

Setting up disks on Windows Server for NFS and iSCSI

Following the steps outlined below, you should be able to create disks on Windows Server that will serve as NFS shares and iSCSI luns for vSphere consumption. Incidentally, the procedure is identical to setting up both NFS and iSCSI save for the last bit where the actual shares and luns are created. I am aware that there are a ton of screenshots to go through but, as the saying goes, a picture is worth a thousand words!

First things first, we need to create a storage pool. 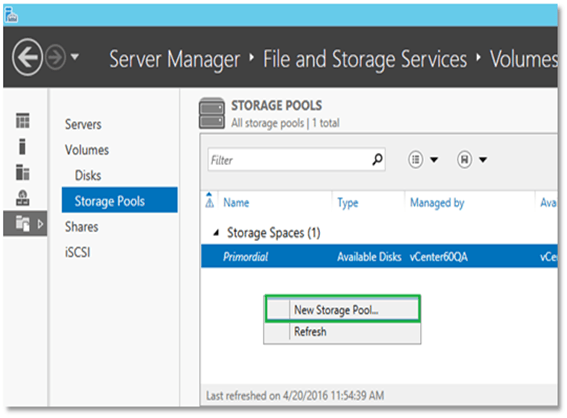 Next, we create a virtual disk. 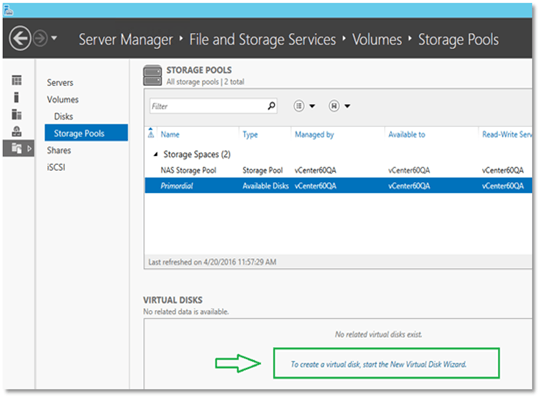 This step, sees us create the volume where the NFS share(s) or iSCSI lun(s) will reside. The setup wizard starts automatically when the “Create a volume when this wizard closes” check-box is selected as per default setting (see previous screenshot). Think of this step as formatting the virtual disk.

And here’s how to create an iSCSI virtual disk. Bear in mind that I’m using a second disk prepared in advance. The same procedure, as outlined above, is once again used. 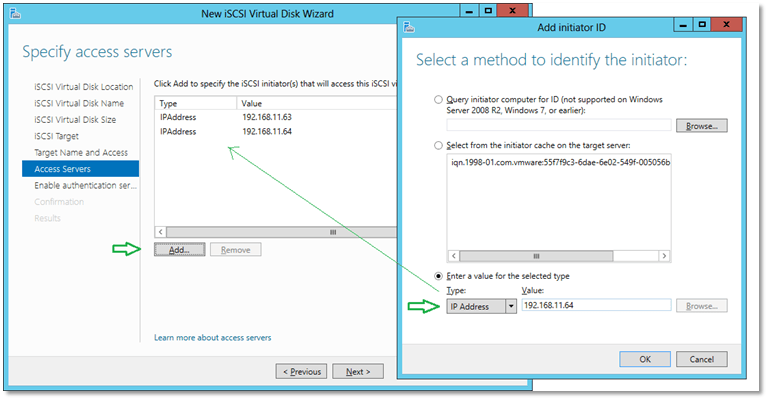 The video at the end of this post goes over the steps I’m about to list. The video demonstrates how NFS and iSCSI based datastores are set for use by a two ESXi host vSphere cluster.

We’ve seen that setting up NFS and iSCSI resources on Windows Server, which we then mount as datastores on ESXi, is a relatively straight forward process. The same methodology applies when carving out datastores from “physical” NAS and SAN implementations. Any added complexity is a side-effect of having to work with proprietary operating systems and command-line such as Data ONTAP from NetApp and SAN management software.

Lastly, I did not bother showing how to create datastores on local storage since it’s just a matter of selecting a local disk and creating a VMFS datastore on it. Hopefully, I’ll be covering Virtual Volumes in a future post since I haven’t as yet had the opportunity to test them out properly.