Usually when we talk about Hyper-V’s virtual disk types, we focus on fixed and dynamically expanding. There’s another type that enjoys significantly less press: differencing disks. Administrators don’t deal directly with differencing disks as often as they work with the other two types, but they are hardly rare. Your Hyper-V knowledge cannot be complete without an understanding of the form and function of differencing disks, so let’s take a look.

What are Hyper-V Differencing Disks?

How Do Differencing Disks Work?

The most important thing to understand is that the virtual disk driver makes a choice to write to the differencing disk. The file itself is not marked read-only. You cannot scan the file and discover that it has a child. The child knows who its parent is, but that knowledge is not reciprocated.

This is a Hyper-V blog, so I mostly only talk about Hyper-V. However, the virtual disk driver is part of the Windows operating system. The normal tools that you have access to in Windows without Hyper-V cannot create a differencing disk, but you can mount one as long as its parent is present.

How are Differencing Disks Created?

For most of us, backup software is the most likely source of differencing disks. When a Hyper-V aware backup application targets a virtual machine, Hyper-V will take a special checkpoint. While the disk and the state of the virtual machine are frozen in the checkpoint, the backup application can copy the contents without fear that they’ll change. When the backup is complete, Hyper-V deletes the checkpoint and merges the differencing disk that it created back into its parent. If it doesn’t, you have a problem and will need to talk to your backup vendor.

Note: backup software operations will always create differencing disks in the same location as the parent. You cannot override this behavior!

Note: checkpoint operations will always create differencing disks in the same location as the parent. You cannot override this behavior!

For the rest of this article, I’m going to pretend that this method doesn’t exist. If you’re operating a full-blown Remote Desktop Services (RDS) operation for your virtual desktop infrastructure (VDI), then it’s using differencing disks. Your gold master is the source, and all of the virtual machines that users connect to are built on differencing disks. When a user’s session ends, the differencing disk is destroyed.

Of the four techniques to create a differencing virtual hard disk, manual creation is the rarest. There aren’t a great many uses for this ability, but you might need to perform an operation similar to the gold master with many variants technique employed by VDI. It is possible to create many differencing disks from a single source and connect separate virtual machines to them. It can be tough to manage, though, and there aren’t any tools to aid you.

You can create a differencing disk based on any parent virtual hard disk using PowerShell or Hyper-V Manager.

The New-VHD cmdlet is the tool for this job:

Don’t forget to use tab completion, especially with ParentPath.

Use the new virtual hard disk wizard in Hyper-V Manager to create a differencing disk:

You can use PowerShell to detect the differencing disk type and its parent:

The Inspect function in Hyper-V Manager does the same thing. You can find this function in the same Action menu that you used to start the disk creation wizard. 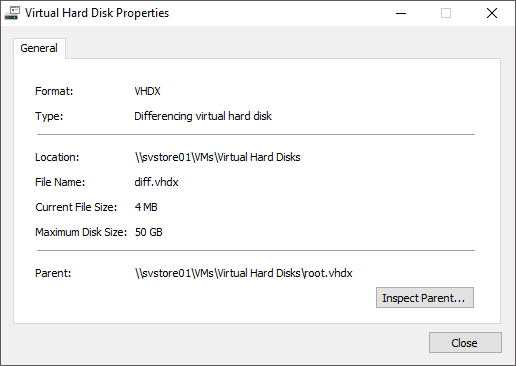 I also wrote a PowerShell script that can plumb a VHD/X file for parent information. It’s useful when you don’t have the Hyper-V role enabled, because none of the above utilities can function without it. Head over to my orphaned Hyper-V file locator script and jump down to the Bonus Script heading. It’s a PowerShell veneer over .Net code, so it will also be of use if you’re looking to do something like that programmatically.

Now that you know how to create differencing disks, it’s important to teach you how to merge them. Ordinarily, you’ll merge them back into their parents. You also have the option to create an entirely new disk that is a combination of the parent and child, but does not modify either. The merge process can also be done in PowerShell or Hyper-V Manager, but these tools have a different feature set.

Use the aptly-named Merge-VHD cmdlet to transfer the contents of the differencing disk into its parent:

The differencing disk is destroyed at the end of this operation.

PowerShell cannot be used to create a completely new target disk, for some reason. It does include a DestinationPath parameter, but that can only be used to skip levels in the differencing chain. For instance, let’s say that you have a root.vhdx with child diff1.vhdx that has its own child diff2.vhdx that also has its own child diff3.vhdx. You can use Merge-VHD -Path .diff3.vhdx -DestinationPath .diff1.vhdx to combine diff3.vhdx and diff2.vhdx into diff1.vhdx in a single pass. Without the DestinationPath parameter, diff3.vhdx would only merge into diff2.vhdx. You’d need to run Merge-VHD several times to merge the entire chain. Hyper-V Manager has no such capability.

Hyper-V Manager has a disk editing wizard for this task.

Hyper-V Manager cannot merge multiple layers of a differencing chain the way that PowerShell can.

The Dangers of Differencing Disks

There are two risks with using differencing disks: performance and space.

When a differencing disk is in use, Hyper-V will need to jump back and forth from the child to the parent to find the data that it wants for reads. Writes are smoother as they all go to the differencing disk. On paper, this looks like a very scary operation. In practice, you are unlikely to detect any performance problems with a single differencing child. However, if you continue chaining differencing disk upon differencing disk, there will eventually be enough extraneous read operations that you’ll start having problems.

If the root disk is fixed instead of dynamically expanding, then the merges will be written into space that’s already allocated. There will always be a space growth concern when merging trees, however, because differencing disks are also dynamically expanding and they merge from the bottom up.

Did a forgotten differencing disk run you out of space? Did a differencing disk get much larger than anticipated and now you can’t merge it back into its parent? No problem. Well… potentially no problem. All that you need is some alternate location to hold one or more of the disks. Follow these steps:

If a differencing disk somehow becomes disjoined from its parent, you can use Set-VHD to correct it. What you cannot do is use it to rejoin a differencing disk to a parent that has been changed. Even though the Set-VHD cmdlet may work, any merge operation will likely wreck the data in the root disk and render both unusable.