Standard and Production Checkpoints in Hyper-V 2016

Checkpoints are one of the oldest features found in almost all hypervisors. Despite its ubiquity, there is a lot of confusion around this technology. What is it? When is it appropriate to use it? Where should it not be used? Why do so many people say not to use it? The 2016 release of Hyper-V muddied the waters further by adding a new type of checkpoint, oddly called “production checkpoints”, even though they are no more or less suited to production environments than the “standard” checkpoint. They do add a greater range of valid use cases to the checkpoint mechanism, though. To use checkpoints appropriately, you need to understand them.

What are Hyper-V Checkpoints?

The checkpointing process is straightforward, but the results are somewhat contradictory and therefore confusing. The following is a generic description that applies to both standard and production checkpoints with the differentiating details left out.

That part seems simple enough. The confusion arises from the way that Hyper-V treats these files for changes.

Let’s look at a visualization of a virtual machine with a checkpoint: 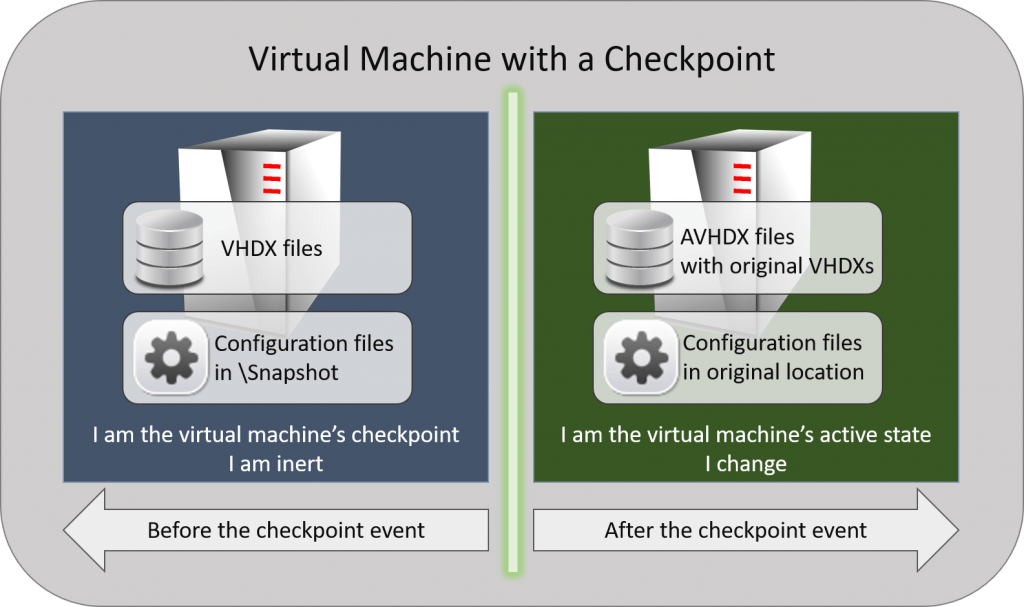 What about “Snapshots”? How Do They Relate to Checkpoints?

Most other hypervisors, including older versions of Hyper-V, call this technology “snapshots”. Virtual Server, the forerunner to Hyper-V, called them “Checkpoints. System Center Virtual Machine Manager has always used that terminology. To bring everything into synchronization, Microsoft has begun gradually shifting toward calling them “checkpoints”, but you will still see many references to “snapshots”. One obvious location is the folder where they’re kept.

There are other technologies called “snapshots”. Most notable is the Volume Shadow Copy Service (VSS) snapshot. That’s a very important part of the new Production Checkpoint, so we’ll expand on it in that section.

How Can I Use Hyper-V Checkpoints as Backups?

The short answer is: you cannot use Hyper-V checkpoints as backups. By definition, a backup is a duplication of data. Checkpoints do not duplicate data.

What you can do is export a checkpoint. This creates a duplicate of the data, and would therefore qualify as a backup. It’s not as efficient as using a dedicated backup application, but it will do if you haven’t got anything better.

If you want only the changed data, then you’ll need to dig into the API. These changes are represented by raw data blocks, so you’re going to need some programming skills to make any use of them. I think, though, that most people just don’t really understand that these changes are not complete files.

The most important thing to take away from this section is that checkpoints are not backups.

How are the Apply, Delete, and Revert Checkpoints Functions Used?

After a checkpoint is created, there are three operations that you can use to manage it.

Depending on your situation, you might prefer the Revert operation.

“Revert” is also an appropriate name, although it does not tell the entire story. “Revert” is exactly like “Apply” except:

Revert has one use:

When the immediately preceding checkpoint is where you want to be and you don’t care to keep the current state, Revert is superior to Apply.

If you literally deleted a checkpoint, then it would destroy everything to the left of the dividing line in the visualization diagram above. Changed data would be orphaned and useless. However, it does literally delete the files in the Snapshot folder that represent any configuration differences, so the verb does retain some applicability. I would say that “merge” does a far better job of describing what happens when you “delete” a checkpoint. Data in the source VHDX and AVHDX files are combined back into the source VHDX files. No data is deleted. Only original virtual machine configuration information is lost in favor of the current configuration (ex. Dynamic Memory settings). We have written directions for deleting checkpoints in an earlier article.

What is the Difference Between Standard and Production Hyper-V Checkpoints?

The new, so-called “production” checkpoints rely on not-so-recent advances in hypervisor technology. Most, including Hyper-V, now have some technique for reaching into the “black box” and interacting with specially-designed components running inside. For Hyper-V, these are called “Integration Services” for Windows and “Integration Components” for Linux. One of those services is the Backup (volume shadow copy) service, which in turn interacts with the Volume Shadow Copy Service, which most of us know simply as “VSS”.

Many articles could (and have been) written about VSS. At its core, it is a gateway between backup applications and the operating system. VSS exists to address the fact that data can and does change while backups are being taken. We already have an article set that covers the terms and mechanisms related to VSS and backup. The most important thing to know about VSS is that it provides the ability for applications to cease all I/O and flush outstanding data and operations from memory to disk so that the backup doesn’t miss anything. The most important thing to know about VSS’s place in the universe is that not all applications take advantage of it. That is where we draw the distinction between “standard” and “production” checkpoints.

What are the Characteristics of Standard Checkpoints?

The short form definition of a standard checkpoint is: the virtual machine exactly as it was when the checkpoint was taken.

Let’s see it in action. Inside a virtual machine, I created a new text file on the desktop, opened it up in notepad, typed some text, and took a checkpoint without saving the file: 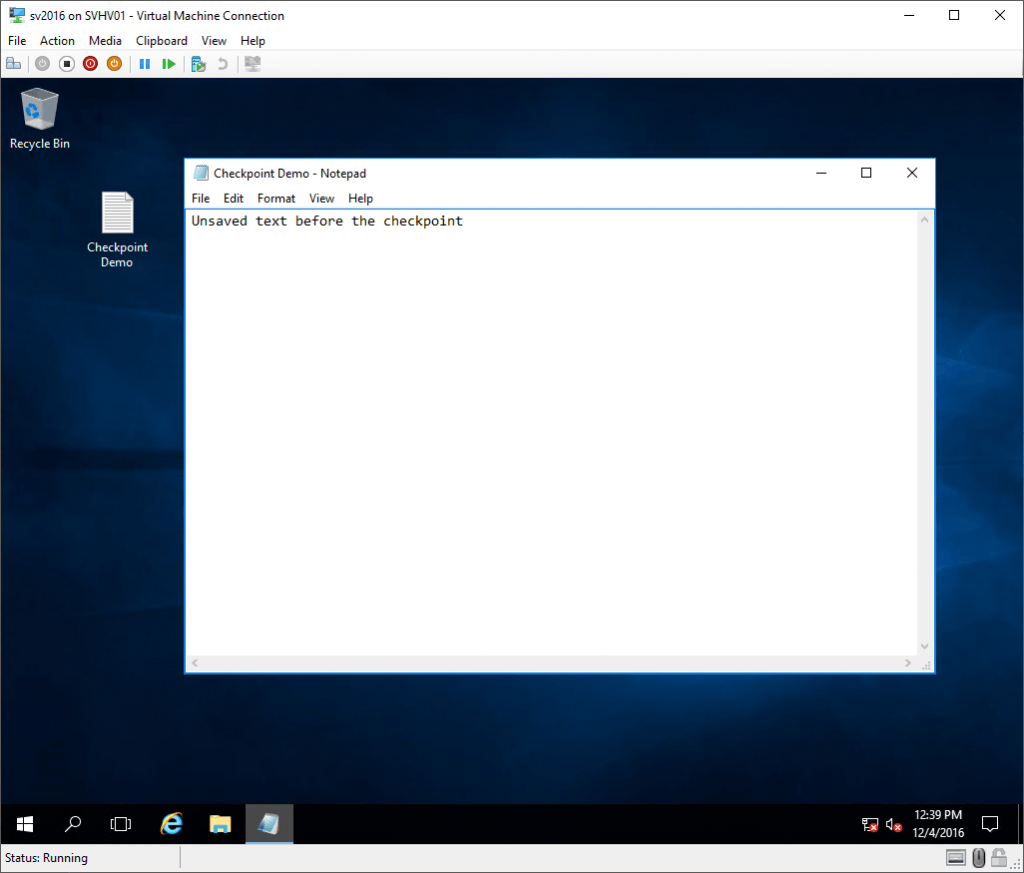 Next, I made some changes: 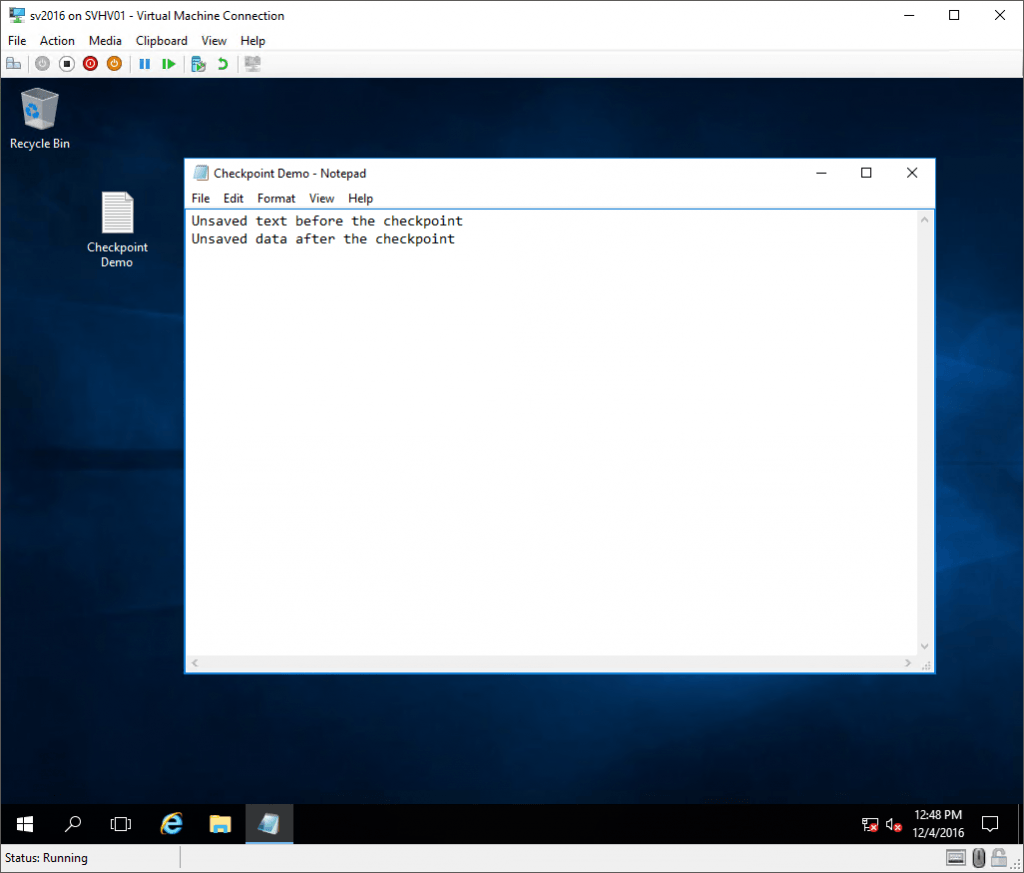 And then I reverted it (remember that this causes everything that I did after the checkpoint to be lost): 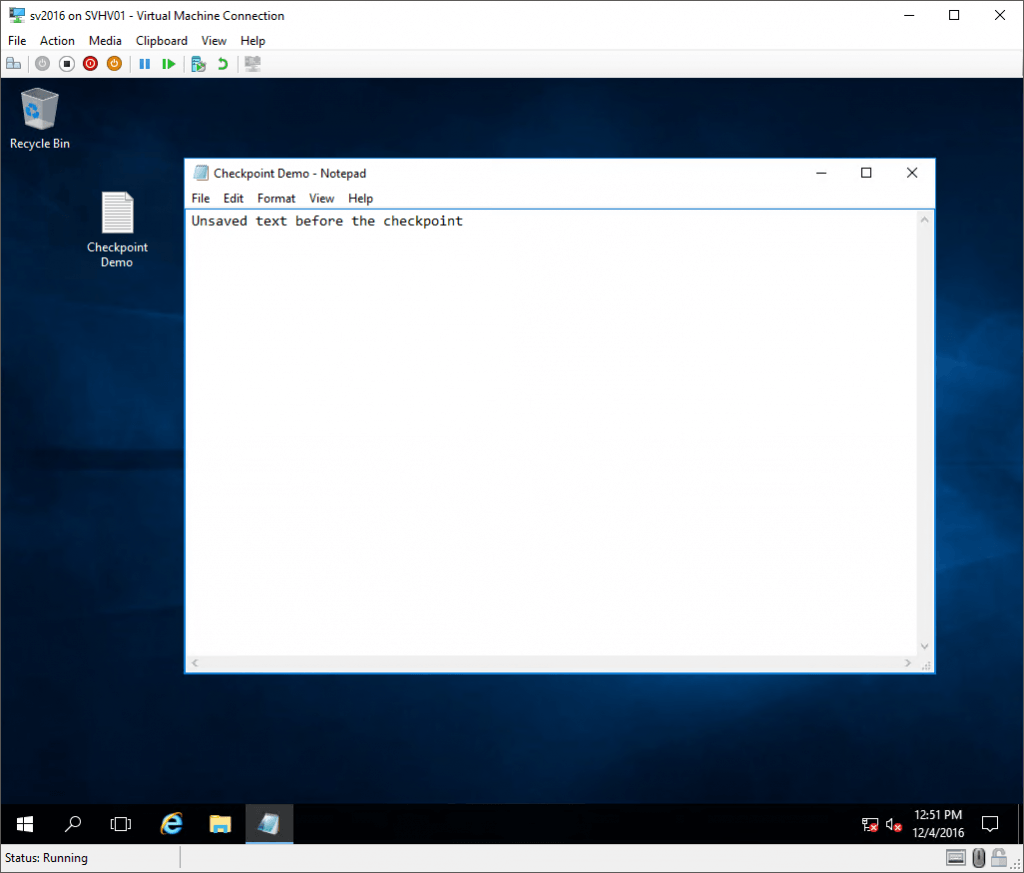 So, at this point, what of that Notepad content lives in the VM’s VHDX? Nothing, that’s what. I never saved anything. But, all of the text that was in the in-memory version of the document is still there because the state of memory was saved. The checkpoint represents the virtual machine as it was at the exact moment that the checkpoint was taken. Notepad doesn’t know that anything happened. The only thing anywhere in the virtual machine that realizes that anything is different is the time service. I do have the Time Synchronization service enabled, so the clock was updated immediately.

What are the Characteristics of Production Checkpoints?

Start with the initial “What are Checkpoints” section. Everything there applies to production checkpoints. Unlike standard checkpoints, production checkpoints do not capture anything else. Instead, they trigger VSS in the guest. Any application operating within that has registered a VSS writer will then carry out whatever operations the writer is designed to perform. For example, Microsoft Exchange will commit its logs to the store. Windows will also stop in-flight I/Os from occurring and flush file system queues.

What’s important to know is that active CPU operations and the memory state are not protected in any way.

To demonstrate, I’m going to continue with the same VM as in the Standard Checkpoint section above. I merged (“deleted”) that checkpoint. I set the virtual machine to use Production checkpoints, then took a checkpoint. Once that was done, I did the same thing that I did with the Standard checkpoint: I typed some data into the notepad file. Then, I reverted the checkpoint. 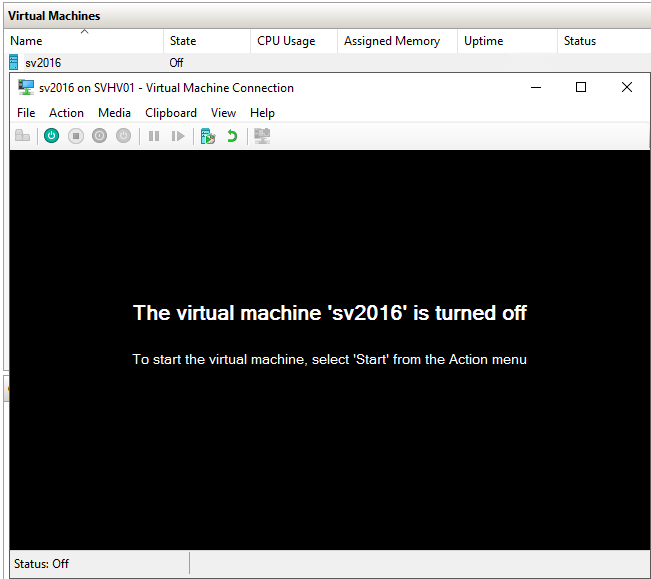 After that, I powered on the virtual machine and opened the file that I had created on the desktop. This is what it looks like: 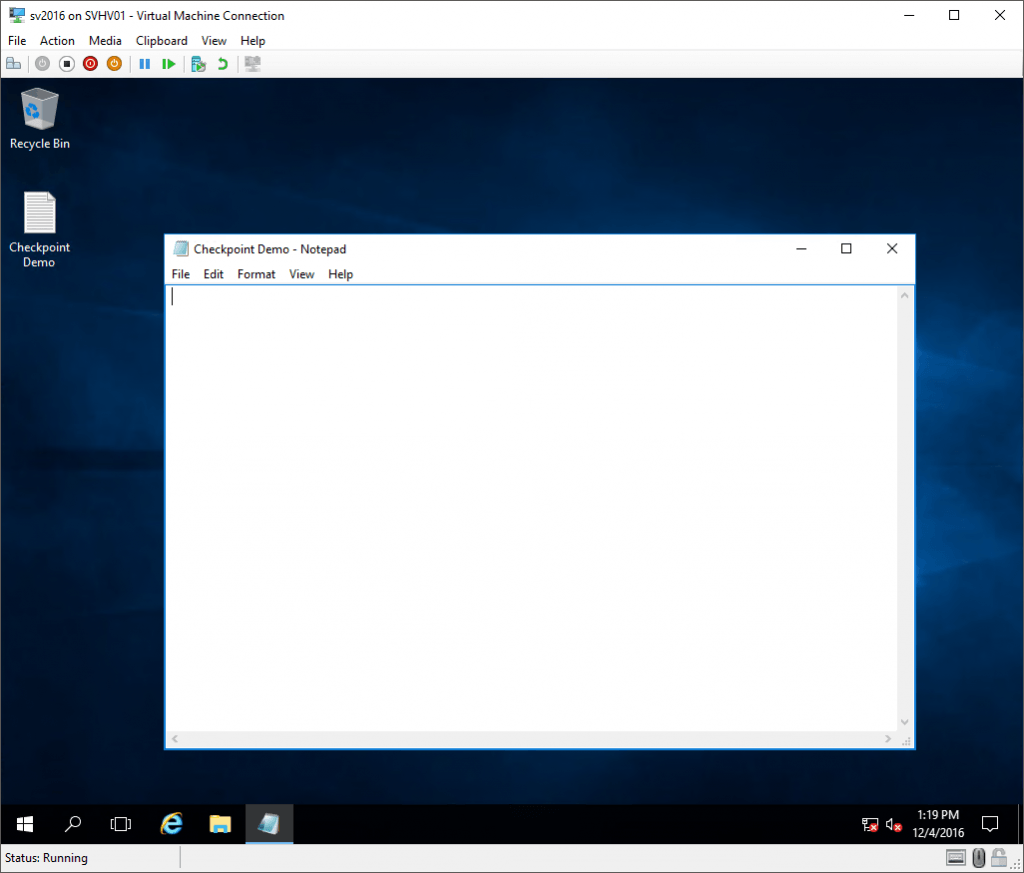 What happened to the data? First of all, I never saved it. Those words were only in memory. Second, Notepad.exe does not have a VSS writer. When the Production checkpoint triggered VSS, Notepad.exe didn’t know what to do, so it did nothing.

When Should I Use Checkpoints?

Checkpoints should be used for short-term protection during a planned event that might cause otherwise irreparable damage to a virtual machine. This is true for both Standard and Production checkpoints. Examples of valid usages for checkpoints:

Whatever reason you have for using a checkpoint, they are for short-term usage only. I’ve heard of people allowing checkpoints to sit for as long as a year before deciding to do anything about it. Even if they can address the situation without problems, that’s not a good usage of the technology. Personally, I don’t like checkpoints to live for more than a few hours. I suppose a deeply layered upgrade process might warrant a checkpoint that lives for a day or two. I can’t give you a hard rule, but I can give you a solid rule of thumb: never allow a checkpoint to outlive its usefulness. What I mean is, for every checkpoint that you’ve got, ask yourself: “If I revert this checkpoint, would the state of the virtual machine be useful, or would I lose too much?” If it’s not useful, merge it now.

There are some people that say, “I never use checkpoints in production” (implying that you shouldn’t either) and justify it with a litany of excuses. Some of those excuses:

Should I Use Standard or Production Checkpoints?

Use Cases for Standard Checkpoints

I’m assuming that my Notepad demonstration is not indicative of normal server operations. However, there are a great many server-based applications that don’t respond to a VSS event. A Standard checkpoint is preferable to a Production checkpoint when all of the following are true about an application that you wish to protect in the virtual machine:

Examples of this type of application would be non-VSS-aware database and mail servers. I have worked with many vendors that use very old database technology (read as: the application vendors and their customers can avoid licensing fees for modern RDBMSs). These would best be served by standard checkpoints.

Use Cases for Production Checkpoints

There are many obvious uses for Production checkpoints, so I’ll skip those. A Production checkpoint would be a good choice for something like an Apache web server that acts as a front-end for a remote SQL server. If reverted, the Apache web server will resume from an Off state, so it won’t attempt to continue any operations that were active when the checkpoint was taken. If you used a Standard checkpoint instead and a web user was trying to update a record, that could result in some data inconsistency.

Are There Any Situations in Which All Checkpoints Should be Avoided?

I clearly do not subscribe to the “never” philosophy of checkpoints. However, there are some applications whose virtual machines should never be checkpointed:

How Do I Configure Checkpoints in Hyper-V 2016?

The checkpoint configuration process has changed for this version. In previous versions, the only thing that you could change is where checkpoint files were placed. In 2016 (including Windows 10 Client Hyper-V), you can:

By default, every virtual machine is enabled for Production checkpoints with the Standard fallback. To change these settings, open the virtual machine’s settings in Hyper-V Manager and switch to the Checkpoints tab: 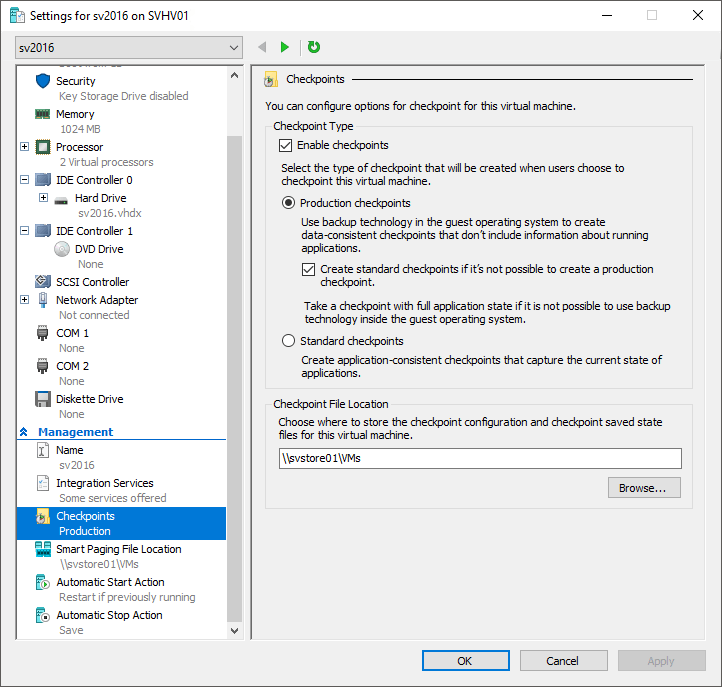 You can also use PowerShell, which is ideal for bulk operations. The cmdlet is Set-VM. The parameter selection for checkpoint type is, easily enough, -CheckpointType. It accepts values of Disabled, Standard, Production, and ProductionOnly. Use the SnapshotFileLocation parameter to tell it where it place the configuration and state information files.

Classification Confusion for Checkpoints in 2016

19 thoughts on "Standard and Production Checkpoints in Hyper-V 2016" 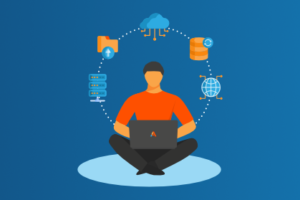 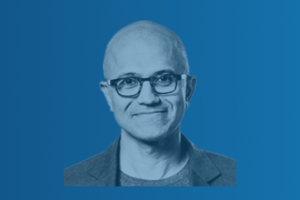