We can never get enough performance. Everything needs to be faster, faster, faster! You can find any number of articles about improving Hyper-V performance and best practices, of course, unfortunately, a lot of the information contains errors, FUD, and misconceptions. Some are just plain dated. Technology has changed and experience is continually teaching us new insights. From that, we can build a list of best practices that will help you to tune your system to provide maximum performance. 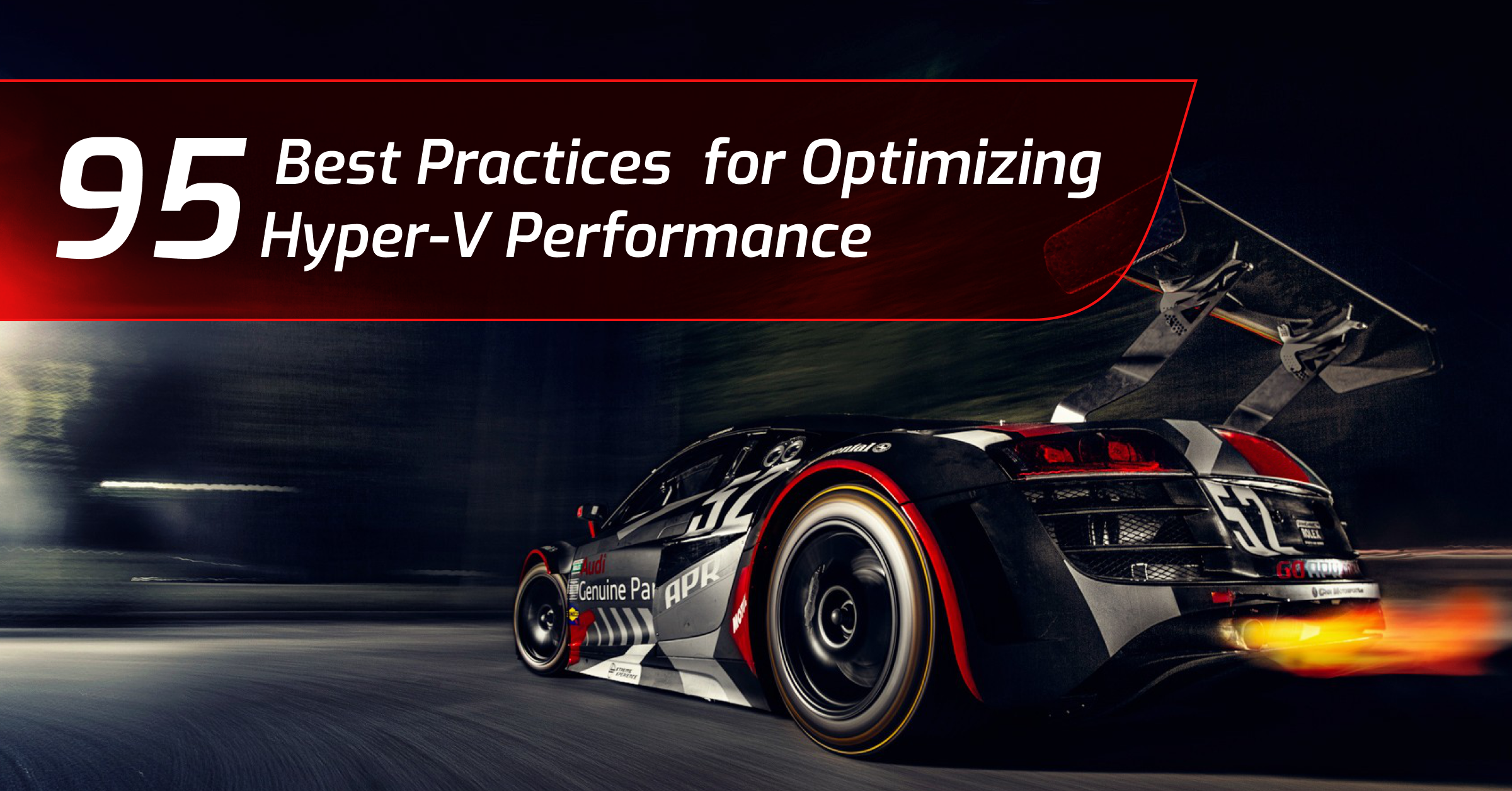 Philosophies Used in this Article

This article focuses primarily on performance. It may deviate from other advice that I’ve given in other contexts. A system designed with performance in mind will be built differently from a system with different goals. For instance, a system that tries to provide high capacity at a low price point would have a slower performance profile than some alternatives.

If you’re lucky enough to be starting in the research phase — meaning, you don’t already have an environment — then you have the most opportunity to build things properly. Making good purchase decisions pays more dividends than patching up something that you’ve already got.

Before we carry on, I just wanted to make sure to mention that Hyper-V is a type 1 hypervisor, meaning that it runs right on the hardware. You can’t “touch” Hyper-V because it has no direct interface. Instead, you install a management operating system and use that to work with Hyper-V. You have three choices:

Note: Nano Server initially offered Hyper-V, but that functionality will be removed (or has already been removed, depending on when you read this). Most people ignore the fine print of using Nano Server, so I never recommended it anyway.

TL;DR: In absence of a blocking condition, choose Hyper-V Server. A solid blocking condition would be the Automatic Virtual Machine Activation feature of Datacenter Edition. In such cases, the next preferable choice is Windows Server in Core mode.

I organized those in order by distribution size. Volumes have been written about the “attack surface” and patching. Most of that material makes me roll my eyes. No matter what you think of all that, none of it has any meaningful impact on performance. For performance, concern yourself with the differences in CPU and memory footprint. The widest CPU/memory gap lies between Windows Server and Windows Server Core. When logged off, the Windows Server GUI does not consume many resources, but it does consume some. The space between Windows Server Core and Hyper-V Server is much tighter, especially when the same features/roles are enabled.

One difference between Core and Hyper-V Server is the licensing mechanism. On Datacenter Edition, that does include the benefit of Automatic Virtual Machine Activation (AVMA). That only applies to the technological wiring. Do not confuse it with the oft-repeated myth that installing Windows Server grants guest licensing privileges. The legal portion of licensing stands apart; read our eBook for starting information.

Because you do not need to pay for the license for Hyper-V Server, it grants one capability that Windows Server does not: you can upgrade at any time. That allows you to completely decouple the life cycle of your hosts from your guests. Such detachment is a hallmark of the modern cloud era.

If you will be running only open source operating systems, Hyper-V Server is the natural choice. You don’t need to pay any licensing fees to Microsoft at all with that usage. I don’t realistically expect any pure Linux shops to introduce a Microsoft environment, but Linux-on-Hyper-V is a fantastic solution in a mixed-platform environment. And with that, let’s get back onto the list.

In the “traditional” virtualization model, we stand up multiple virtual machines running individual operating system environments. As “virtual machine sprawl” sets in, we wind up with a great deal of duplication. In the past, we could justify that as a separation of the environment. Furthermore, some Windows Server patches caused problems for some software but not others. In the modern era, containers and omnibus patch packages have upset that equation.

Instead of building virtual machine after virtual machine, you can build a few virtual machines. Deploy containers within them. Strategies for this approach exceed the parameters of this article, but you’re aiming to reduce the number of disparate complete operating system environments deployed. With careful planning, you can reduce density while maintaining a high degree of separation for your services. Fewer kernels are loaded, fewer context switches occur, less memory contains the same code bits, fewer disk seeks to retrieve essentially the same information from different locations.

You can’t do a great deal to tune CPU performance in Hyper-V. Overall, I count that among my list of “good things”; Microsoft did the hard work for you.

I’ve long believed that every person that wants to be a systems administrator should be forced to become conversant in x86 assembly language, or at least C. I can usually spot people that have no familiarity with programming in such low-level languages because they almost invariably carry a bizarre mental picture of how computer memory works. Fortunately, modern memory is very, very, very fast. Even better, the programmers of modern operating system memory managers have gotten very good at their craft. Trying to tune memory as a systems administrator rarely pays dividends. However, we can establish some best practices for memory in Hyper-V.

In the time that I’ve been helping people with Hyper-V, I don’t believe that I’ve seen anyone waste more time worrying about anything that’s less of an issue than networking. People will read whitepapers and forums and blog articles and novels and work all weekend to draw up intricately designed networking layouts that need eight pages of documentation. But, they won’t spend fifteen minutes setting up a network utilization monitor. I occasionally catch grief for using MRTG since it’s old and there are shinier, bigger, bolder tools, but MRTG is easy and quick to set up. You should know how much traffic your network pushes. That knowledge can guide you better than any abstract knowledge or feature list.

That said, we do have many best practices for networking performance in Hyper-V.

When you need to make real differences in Hyper-V’s performance, focus on storage. Storage is slow. The best way to make storage not be slow is to spend money. But, we have other ways.

For real performance, don’t cluster virtual machines. Use fast internal or direct-attached SSDs. Cluster for redundancy, not performance. Use application-level redundancy techniques instead of relying on Hyper-V clustering.

In the modern cloud era, though, most software doesn’t have its own redundancy and host clustering is nearly a requirement. Follow these best practices:

The preceding guidance obliquely covers several virtual machine configuration points (check the CPU and the memory sections). We have a few more:

You must monitor your systems. Monitoring is not and has never been, an optional activity.

If you’re able to address a fair proportion of points from this list, I’m sure you’ll see a boost in Hyper-V performance. Don’t forget this list is not exhaustive and I’ll be adding to it periodically to ensure it’s as comprehensive as possible however if you think there’s something missing, let me know in the comments below and you may see the number 95 increase!

Get involved on twitter where we will be regularly posting excerpts from this article and engaging the IT community to help each other improve our use of Hyper-V. Got your own Hyper-V tips or tricks for boosting performance? Use the hashtag #How2HyperV when you tweet and share your knowledge with the world!