In the dawn of computer system virtualization, its primary value proposition was a dramatic increase in efficiency of hardware utilization. As virtualization matured, the addition of new features increased its scope. Virtual machine portability continues to be one of the most popular and useful enhancement categories, especially technologies that enable rapid host-to-host movements. This article will examine the migration technologies provided by Hyper-V.

What is Live Migration?

When Hyper-V first debuted, its only migration technology was “Quick Migration”. This technology, which still exists and is still useful, is a nearly downtime-free method for moving a virtual machine from one host to another within a failover cluster. Quick Migration was followed by Live Migration, which is a downtime-free technique for performing the same function. Live Migration has since been expanded with a number of enticing features, including the ability to move between two hosts that do not use failover clustering.

Live Migration within a cluster requires at least one cluster network to be enabled for Live Migration. Right-click on the Networks node in Failover Cluster Manager and click Live Migration Settings. The dialog seen in the following screenshot will appear. Use it to enable and prioritize Live Migration networks. 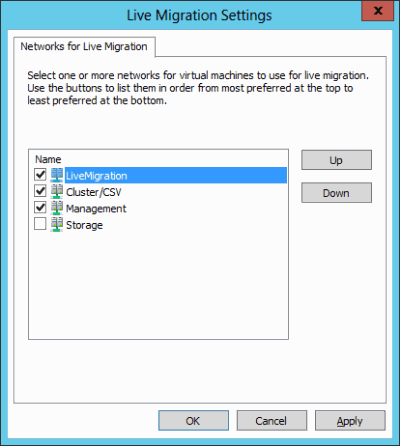 Shared Nothing Live Migration and some migrations using PowerShell will require constrained delegation to be configured. We have an article that gives a brief explanation of the GUI method and includes a script for configuring it more quickly.

Anatomy of a Quick Migration

The following diagrams show the process of a Quick Migration.

The beginning operations of a Quick Migration vary based on whether or not the virtual machine is on. If it is, then it is placed into a Saved State. I/O and CPU operations are suspended and they, along with all the contents of memory, are saved to disk. The saved location must be on a shared location, such as a CSV, or on a Cluster Disk. Once this is completed, the only thing that remains on the source host is a symbolic link that points to the actual location of virtual machine’s XML file:

If the virtual machine was running when the migration occurred, the amount of time required for the operation to complete will be determined by how much time is necessary for all the contents of memory to be written to disk on the source and then copied back to memory on the destination. Therefore, the total time necessary is a function of the size of the virtual machine’s memory and the speed of the disk subsystem. The networking speed between the two nodes is almost completely irrelevant, because only information about the symbolic link is transferred.

If the virtual machine wasn’t running to begin with, then the symbolic link is just moved. This process is effectively instantaneous. These symbolic links exist in C:ProgramDataMicrosoftWindowsHyper-VVirtual Machines on every system that runs Hyper-V. Although it’s rare anymore, the system drive might not be C:. You can always find the root folder by using the ProgramData global environment variable. In the command-line environment and Windows, that variable is %PROGRAMDATA%. In PowerShell, it is $env:ProgramData.

The cluster keeps track of a virtual machine’s whereabouts by creating a resource that it permanently assigns to the virtual machine. The nodes communicate with each other about protected items by referring to them according to their resource. They can be viewed at HKEY_LOCAL_MACHINEClusterResources on any cluster node. Do not modify the contents of this registry key!

There are a few varieties of Live Migration. In official terms, when you see only the two words “Live Migration” together, that indicates a particular operation with the following characteristics:

There are numerous similarities between Quick Migration and Live Migration, with the most important being that the underlying files do not move. The biggest difference is, of course, that the active state of the virtual machine is moved without taking it offline.

Anatomy of a Live Migration

The following diagrams show the process of a Live Migration.

Once the shell is created, the cluster begins copying the contents of the virtual machine’s memory across the network to the target host. At the very end of that process, CPU and I/O are suspended and their states, along with any memory contents that were in flux when the bulk of memory was being transferred, are copied over to the target. If necessary, ownership of the storage (applicable to Cluster Disks and pass-through disks) is transferred to the target. Finally, operations are resumed on the target:

While not precisely downtime-free, the interruption is almost immeasurably brief. Usually the longest delay is in the networking layer while the virtual machine’s MAC address is registered on the new physical switch port and its new location is propagated throughout the network.

The final notes in the Quick Migration section regarding the cluster resource are also applicable here.

There are a few ways that you can impact Live Migration speeds.

The first is found in the host’s Hyper-V settings with a simple limit on how many Live Migrations can be active at a time: 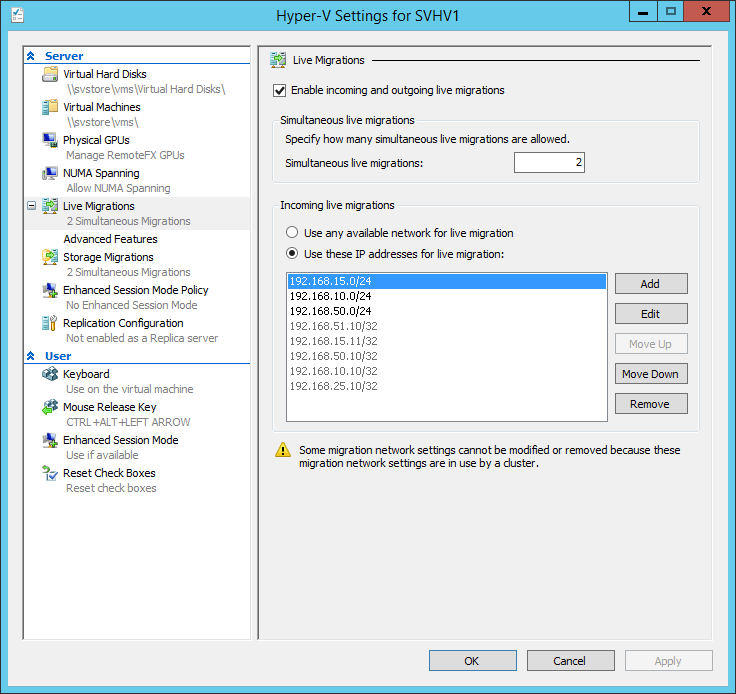 At the top of the screen, you can select the number of simultaneous Live Migrations. Using Failover Cluster Manager or PowerShell, you can direct the cluster to move several virtual machines at once. This setting controls how many will travel at the same time. How this setting affects Live Migration speed depends upon your networking configuration performance options.

If you only have a single adapter enabled for Live Migration, then this setting has a very straightforward effect. If the number is higher, individual migrations will take longer. If the number is lower, any given migration will be faster but queued machines will wait longer for their turn. Overtly, this does not truly affect the total time for all machines to migrate. However, you should remember from the previous discussion that the virtual machine must be paused for the final set of changes to be transferred. If you have a great many virtual machines moving at once, that delay might need to be longer as there won’t be as much bandwidth available for that final bit. Differences will likely be minimal.

Other effects this setting can have will be discussed along with the following Performance options setting.

Before moving on, note that the networks list in the preceding screenshot is not applicable to this type of Live Migration. We’ll revisit it in the Shared Nothing Live Migration section.

The second group of speed-related settings are found on the host’s advanced Live Migration settings tab, visible in this screenshot: 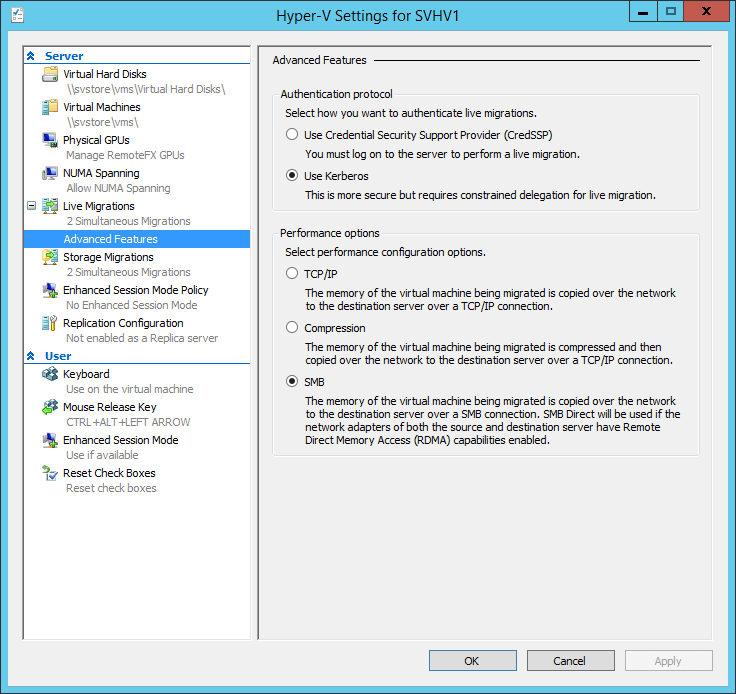 We’re specifically concerned with the Performance options section. There are three options that you can choose:

These choices can be deceptively simple or blindly confusing, depending on your experience with all of these technologies. In addition to the stated text, their efficacy is dependent upon your networking configuration and the number of simultaneous Live Migrations. There are a few ways to quickly cut through the fog:

The third method involves setting network Quality of Service. This is a potentially complicated topic and is not known for paying dividends to those who overthink it. My standing recommendation is that you not manipulate QoS until you have witnessed a condition that proves its usefulness.

Microsoft has an article that covers multiple possible QoS configurations and includes the PowerShell commands necessary. It’s worth a read, but you must remember that these are just examples.

If you’re using the SMB mode for Live Migration, there are some special cmdlets that you’ll want to be aware of. Jose Barreto has documented them well on his blog.

Starting with the 2012 version, Hyper-V now has a mechanism to relocate the storage for a virtual machine, even while it is turned on. It is utilizes some of the same underlying technology that allows differencing virtual hard disks to function and to merge them back into their parents while they are in use. This feature has the following characteristics:

The Anatomy of a Storage Live Migration

I have fielded several questions about moving the replica of a virtual machine. If you’ve configured Hyper-V Replica, you know that your only storage option when setting it up is a singular default storage location per remote host. You can’t get around that. However, what seems to slip past people is that it is, just as its name says, a default location — it is not a permanent location. Once the replica is created, it is a distinct virtual machine. You are free to use Storage Live Migration to relocate any Replica anywhere that its host can reach. It will continue to function normally.