How to upgrade datastores to VMFS-6 in vSphere 6.5

VMware’s Virtual Machine File System (VMFS) is the filesystem of choice for local and block-level storage (ex. SAN) based datastores. If you haven’t upgraded to vSphere 6.5, chances are that you’re still running VMFS-5 or earlier. Upgrading VMFS datastores to the latest version, might be a task to include in your project plan when upgrading to the latest vSphere release. Today’s post takes you through the process of moving a VMFS-5 datastore to VMFS-6.

VMFS-6 is only available in vSphere 6.5. There are several reasons why you would want to upgrade to this latest version. One of its most anticipated features is Automatic Space Reclamation (ASR) which allows storage arrays to reclaim deleted or unmapped disk blocks from a VMFS datastore so they can be used elsewhere.

Note: ASR only works with volumes that have been thin-provisioned and that support the vStorage API for Array Integration (VAAI) Unmap primitive.

With earlier versions of VMFS, something like esxcli storage vmfs unmap or vmkfstools is used to reclaim these blocks. With VMFS-6, the functionality is now automated and fully integrated in the vSphere 6.5 UI as shown in Fig. 1. 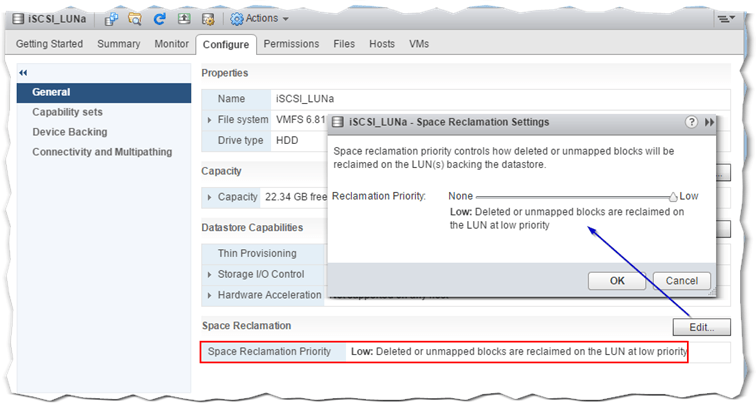 One other new feature provides support for large capacity drives. 4KN sector drives, where metadata is aligned over 4KB blocks, are now supported. Variable block sizes is yet another feature that greatly improves file creation times. In truth, there are too many goodies to list them all so if you want the full details, have a look at the vSphere 6.5 Storage whitepaper.

Which VMFS version am I running?

There are several ways to determine the VMFS version datastores are formatted in. The easiest, of course, is using a vSphere client or the embedded host client. Irrespective of the client used, the Datastores view should give you the required information. Figure 2 shows a list of datastores I have in my test environment – both local and shared – along with the respective VMFS version.

Alternatively, the Get-Datastore PowerCLI cmdlet returns the same information for datastores mounted on a single ESXi instance or those managed by vCenter. In the example given below, I restricted the output, using Format-table (FT),  to what’s actually required.

Similarly, you can use ESXi’s command line tools such as esxcli to retrieve the same. Using putty or otherwise, SSH to an ESXi host and run the following:

How to upgrade to VMFS-6

The term upgrade is somewhat misleading since in reality no upgrade path is available. Instead, you must format the volume or LUN on which the current datastore resides using VMFS-6. The easiest way to this is as follows:

Figure 5 – Unmounting a shared datastore provisioned on a SAN

Note: At this point, the device or LUN on which the datastore originally resided is still visible to ESXi or vCenter. You can verify from the list of devices under Storage Devices for a selected ESXi host. It’s now just a matter of running the New Datastore wizard and re-create the datastore afresh this time formatted with VMFS-6.

Figure 9 – Selecting the VMFS type for the new datastore 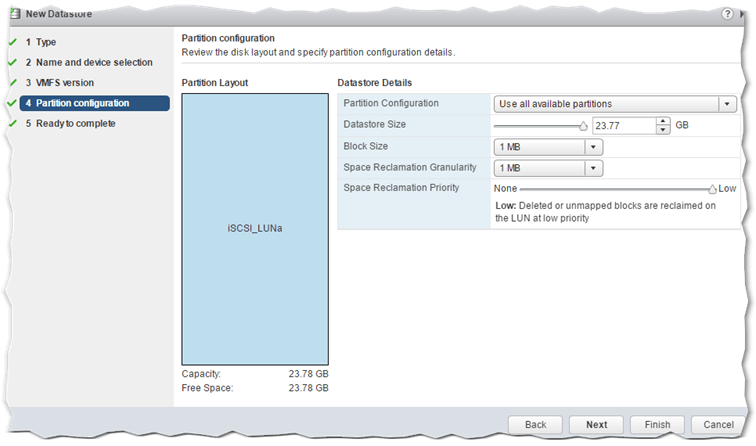 As mentioned, upgrading from VMFS-x to VMFS-6 is not an option. Regardless, let’s try upgrading a VMFS-5 datastore from the command line.

To test this out, I’ve used vmkfstools while connected to the ESXi host via SSH. The command syntax is vmkfstools -T <volume path>. The volume path is retrieved by running the esxcli command mentioned earlier or from the datastore’s summary page in vSphere Web Client (value next to Location) .

As expected, upgrading the datastore fails as per the error highlighted in Figure 11.

So, let’s go ahead and format it instead.

Figure 13 – Creating a VMFS-6 datastore from the command line

Figure 14 – The newly created datastore is named after its UUID

Note: Add -S <datastore name> to vmkfstools’ list of parameters to assign a name to the datastore being created.

As we have seen, there are several reasons why you would want to upgrade to VMFS-6, the most salient feature being Automatic Space Reclamation, which is UI driven, and support for 4KN drives. Keep in mind that there is no in-place upgrade path, so reformatting the datastore is your only option. You can do this using the vSphere Web Client or command-line tools.

4 thoughts on "How to upgrade datastores to VMFS-6 in vSphere 6.5"