Cloning virtual machines from template is commonplace when managing a significantly sized vSphere environment. If you’re new to vSphere templates, do have a look at my 4-part guide on the blog titled vSphere VM Templates, a Complete Guide. Particularly relevant to today’s subject matter is Part 2  since it covers the process of creating Linux templates, a must read if this is all new to you. Today, we tackle one issue you might possibly face when cloning Linux virtual machines from template. I’m referring to the dreaded missing network card instance where Linux basically fails to recognize the network card or fails to activate it if it does. This post tackles the issue of adding (or activating) network cards on Linux virtual machines cloned from template.

By default, the first network interface on a Linux box is labeled eth0. This, however, depends on the Linux distro in use and the configuration abuse it’s been subjected to. Regardless, one frequent error message you’ll come across is Device eth0 does not seem to be present, delaying initialization. This error pops up when a primary interface fails to initialize when issuing something like ifup eth0 or during the OS booting up process.

So, why is my interface missing? Well, in general, it’s not really missing.  The problem is that when you clone a VM from template, the network card on the resulting VM is given a new MAC address. In truth, this is exactly what we want. Duplicate MAC addresses on a network are synonymous with trouble! We do, however, have a problem when looking it at it from the guest OS perspective. This is because the VM’s network configuration still includes the old MAC address, the one assigned to the template’s network interface.

So, what you end up with is a failed network interface due to a mismatch between the MAC address specified in guest OS network configuration and the physical MAC assigned to the VM.

To replicate the issue, I converted an existing Centos VM to a template. I then created a new Centos VM using this template via the New VM from This Template option. For illustrative purposes, I recorded the template’s MAC address as shown in the next screenshot.

In this example, the Centos VM happens to be running with an interface called ens33 instead of the standard eth0. In Linux, each network interface has a corresponding configuration file called ifcfg-<interface name>.

In our case, the config file is called ifcfg-ens33 which is found in the default location /etc/sysconfig/network-scripts. Don’t worry too much about naming conventions and such as these might vary according to the Linux distro in question.

On closer inspection, you should see an entry called HWADDR=XX:XX:XX:XX:XX:XX which is the network card’s MAC address in HEX notation. You’ll see that this matches the MAC address highlighted in Fig.1 which is precisely our problem. 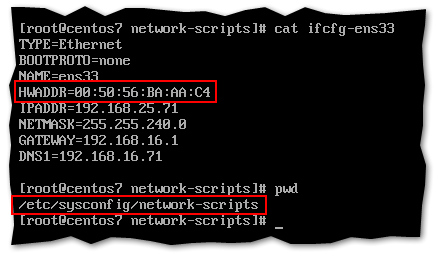 The ifconfig -a output tells us that ens33 has no associated IPv4 information hence no network connectivity. 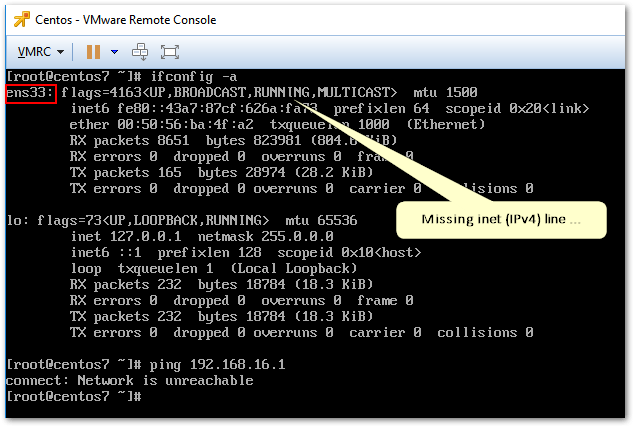 In order to fix this, we need to change the value of HWADDR to reflect the MAC address assigned to the VM. 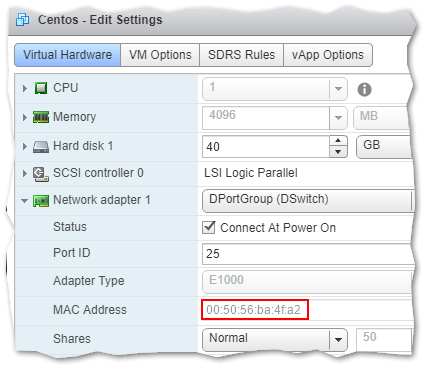 How to fix it!

Fixing the problem is easy.

Note: The following steps apply to Centos and Redhat but the idea is basically the same for different distros even though the commands used and file paths will differ. This KB article covers SUSE Linux as well.

Step 1 – Determine the name of the failing interface. Use any of the following commands ip a, ifconfig or nmcli device show. I’ve used the nmcli command, the output of which shows that network card ens33 is failing to connect. 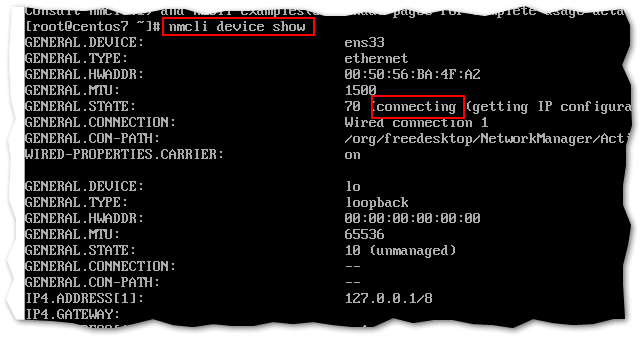 Step 3 – Run the following command. This deletes the MAC address to interface name association at startup.

At this point, running service network restart should bring up the interface and establish network connectivity to the VM.

Step 4 – Type reboot to restart the VM. This allows you to verify that the network changes persist after reboots.

The following video takes you through these 4 steps. Keep in mind that there are different variations to this issue. In some instances, it’s only the loopback interface that’s listed, in which case I suggest using the nmtui tool to fix the problem.

Deploying a VM from a poorly prepared Linux template can result in virtual machines with missing or inactive network interfaces. In today’s post, we saw just how to fix this issue. There are a few more things you could do to prevent the issue from reoccurring. The easiest is to remove the HWADDR line from the template ifcfg-<interface> configuration file. It’s best to test this fix first if you’re using the Linux box as a load balancer and similar. This solution also looks promising though I have yet to have a go at it. If I do, I’ll update the post accordingly.

Regardless, fixing network card issues on Linux VMs is easy when you know where to look. As always, prevention is better than cure, so one should always clone from well-prepared templates.