How to install vSphere ESXi on a bare metal server

This blog post will show you how to install VMware’s vSphere ESXi 6.0 hypervisor on a bare metal server as a real-world example. A bare metal server is simply a server that has yet to have an OS installed on it.

These are the steps I’m going to take you through in this post, so let’s get going.

Is my hardware compatible?

This, perhaps, is the most important step as it ensures that your hardware is ESXi ready. Failing this, ESXi may fail to install or you might run into unexpected issues further down the line. Additionally, you won’t be getting support from VMware if your hardware does not support ESXi.

Note: Have a look at How to use VMware compatibility tools to learn how to check if your hardware is compliant.

The hardware I will be installing ESXi 6.0 on, is an HP Proliant MicroServer Gen7 that’s been gathering dust in the office. Figure 1 is an actual picture of it. The poor bugger has seen better days. 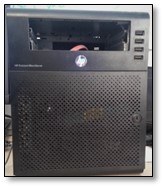 I first need to power it up to determine the type of processor, amount of RAM installed, etc. Pressing F10 takes me to the BIOS utility which I’ll be using to learn about the server’s hardware si I can assess if it is ESXi 6.0 complaint or not. As per Fig. 2, the BIOS utility is of very little help save for the processor type and serial number provided. Well, let’s try and plug in the serial number on HP’s support website. This gives me a thorough listing of the server’s hardware but, in this case, the site returned nothing that I didn’t already know. 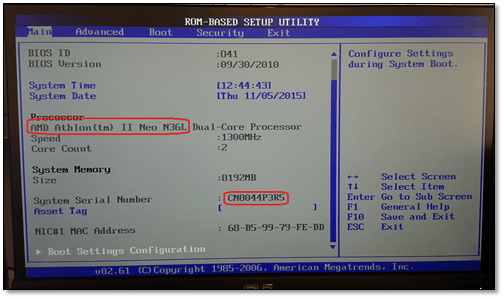 The next step is to use the VMware Compatibility Guide and not surprisingly, the server isn’t listed here either. I had a feeling this was going to be the case since I knew beforehand that the AMD Athlon II family of processors is not supported. This is evidenced by the conspicuous absence of AMD processors – except for the Opteron family – listed under CPU Series as per Fig. 3.

The only server returned by the search query is the HP Proliant MicroServer G8 (see Fig. 4) which has better specs than the one I have. Regardless, I’m stuck with what I have.

Let’s head back to HP’s website so we can have a look at the compatibility matrix. This is worth doing when verifying compatibility as major vendors will generally provide this type of information. As already confirmed, ESXi is only supported on HP’s Gen8 microservers. I guess it’s time to throw in the towel! 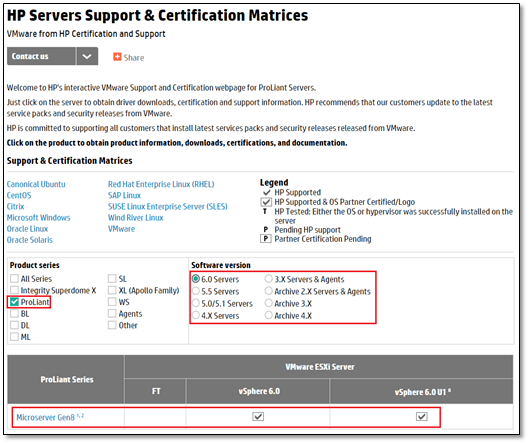 If this were a production deployment, I would shelf the idea of using this server for anything but testing. And since testing we are, let’s have a go and see if we can install and run ESXi on it.

TIP: This excellent VMware article, describes how to gather data to use with the VMware Compatibility Guide on existing ESXi installations. This comes in handy when planning ESXi upgrades or simply adding new hardware to existing servers.

ESXi is distributed as a bootable ISO image which you can burn or copy to any medium that is made bootable.  To download and evaluate ESXi, visit the VMware vSphere Product Evaluation Center and select VMware vSphere as per Fig. 6. 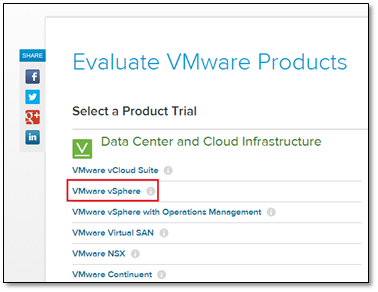 If you don’t already have one, sign up for an account ave one. On completion, you will receive an activation link on the email address supplied. 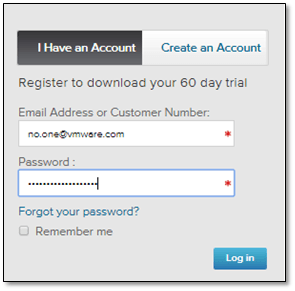 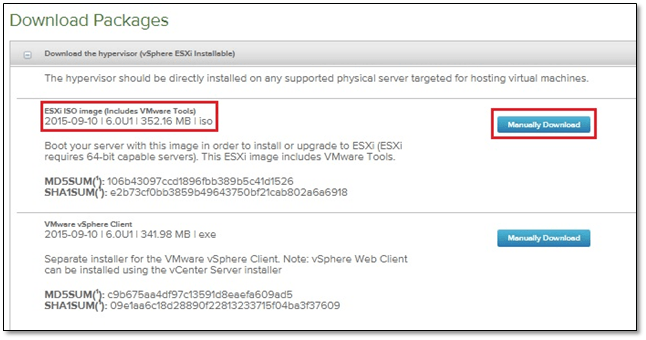 Note: VMware make frequent changes to their website so any links and screenshots given here are valid at the time of writing.

We next need to create a bootable device of off which ESXi will be installed. I’ll be using a USB pen drive since the HP server is missing an optical drive. Another option, involves deploying ESXi over the network using PXE. However, the network card on the server is not PXE compliant so it’s back to using the pen drive.

Update (21/6/2017): Testing ESXi Auto Deploy in a nested environment shows you how to deploy ESXi using PXE and Auto Deploy.

A 4GB Corsair USB stick will do just fine. I’ll also be using a piece of software called Rufus to make the pen bootable. You can Rufus get. There’s also a portable version of Rufus if you’d rather not install it. Regardless, remember to scan any files you download before running or installing; better safe than sorry!

The process is straight forward unlike other methods that involve diskpart or Linux.  After you insert the USB stick in a free USB port, launch Rufus and; 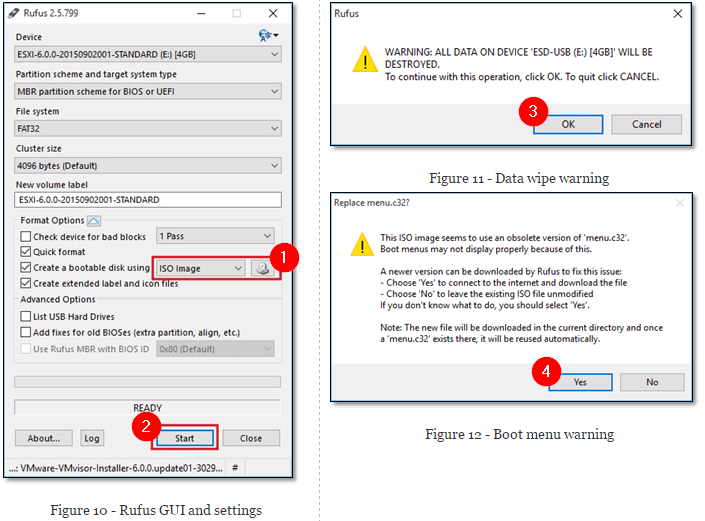 We can finally install ESXi. With the USB pen drive in place, power up the server and wait for the boot screen (see Fig. 13). If this fails, return to the BIOS utility and verify that the boot-up sequence includes USB devices.

The steps required to install ESXi are as follows: 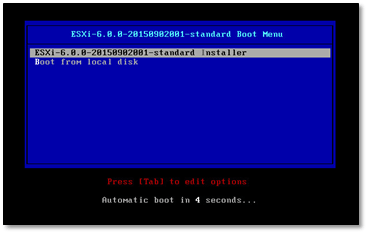 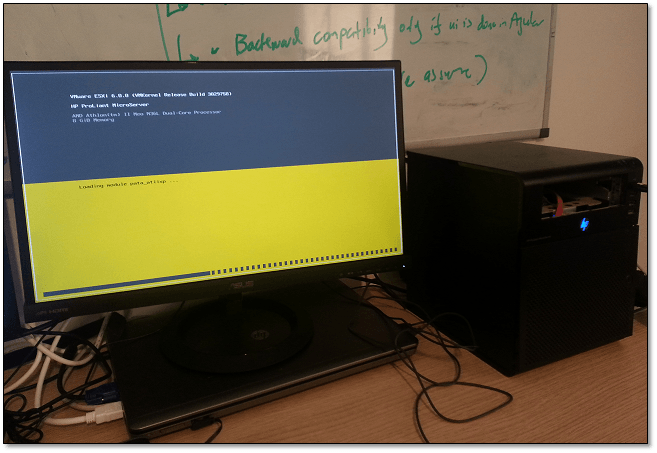 Figure 16 – Kicking off the installation process 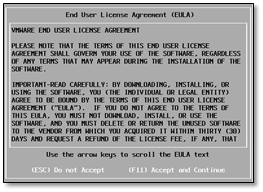 Figure 19 – Choosing the disk on which ESXi will be installed 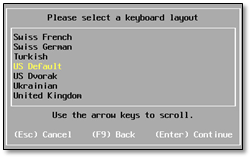 Figure 23 – Final confirmation before kicking off the installation process 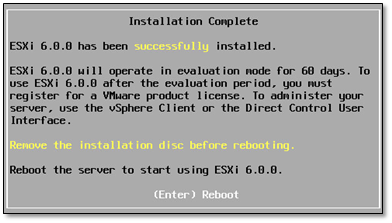 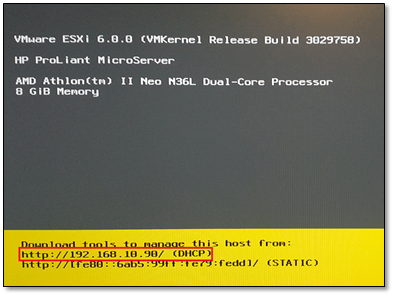 We now finalize the installation. Pressing F2 at the console screen (DCUI) brings up a number of options.

Figure 28 – Logging in to ESXi 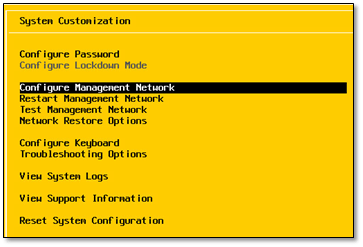 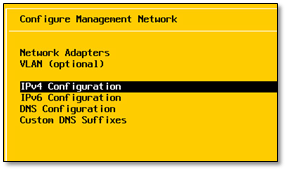 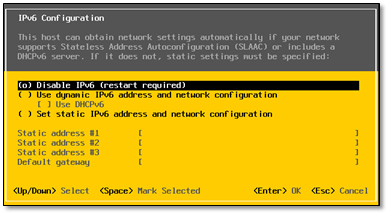 Once ESXi is up and running, you can go ahead and create your first virtual machines. However, before doing so, I’d like to demonstrate how to tweak ESXi a little bit more.

The vSphere (thick or C#) client is a management tool used to configure ESXi and virtual machines amongst other things. to this effect, we need to install it. Using any browser, go to https://<ESXi IP address>. Alternatively, you may download the client from here. As per Figure 36, click on vSphere Client for Windows to download the client installer. Install it as you would normally do with any other software package.

Update (21/6/2017): Since this post was published, VMware have released the ESXi host client which is ESXi embedded meaning you no longer need to install a separate management client. 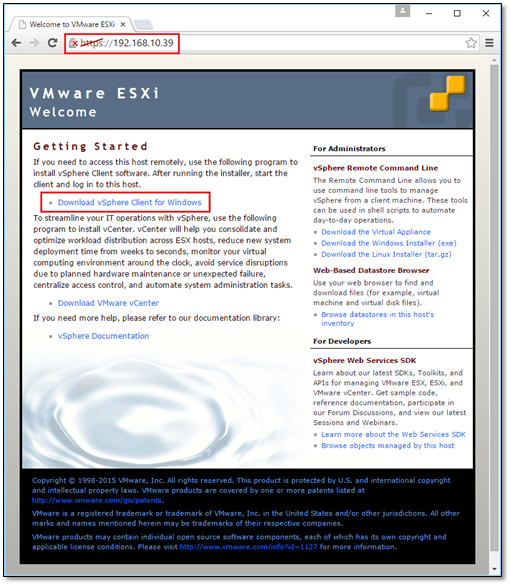 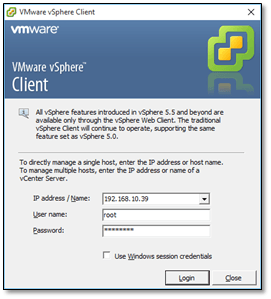 Figure 37 – Logging in ESXi with the vSphere client 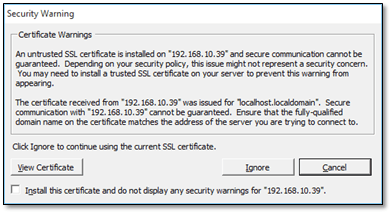 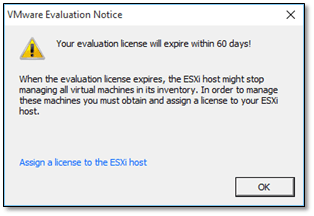 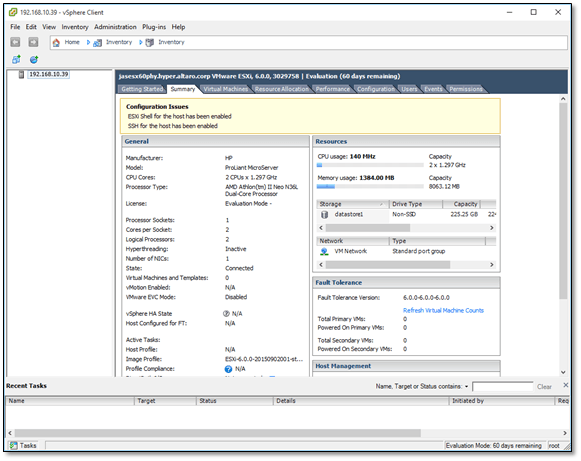 Note: Familiarize yourself with the various Hardware and Software settings under the Configuration (see Fig. 41). I’ve selected Storage to see if a Datastore has been created. A datastore is where the files making up a virtual machine will reside each in its own folder. Also worth looking at are the Networking and Network Adapters settings. 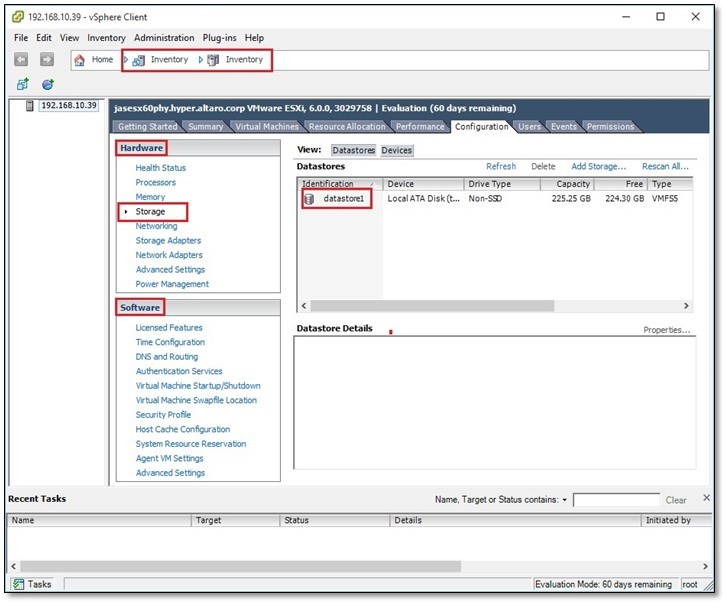 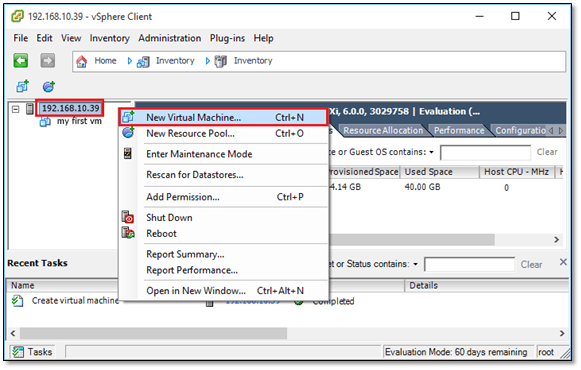 Despite not being officially supported, our HP server seems to be handling ESXi pretty well. Notwithstanding, compatibility is key here so make sure that all your components tick the required boxes before you go on and install ESXi. To reiterate, never ever install ESXi on non-compliant hardware that is used in production, or live, environments for all the reasons above mentioned.