How to generate a vSphere report using PowerShell

PowerShell is a great tool to have and it’s worth putting in the effort to at least learn the basics. If you happen to be a VMware admin, chances are that at some point you will cross paths with PowerCLI.  For the uninitiated, PowerCLI is nothing more that an interface – an extension of sorts – VMware developed for PowerShell. Mastering it will open the door to endless applications from the automation of tasks to generating your own vSphere reports.

This post dissects a script I appositely revived for this session.  Occasionally, you will find yourself needing a report on the number and type of virtual machines present in your environment but lack the tools to quickly create one. The script I’ll go on to explain, addresses this need. It quickly retrieves vm related information such as memory usage and OS type converting the whole lot into an HTML report.

I do cover a few scripting basics but the assumption about the reader’s familiarity with PowerCLI / PowerShell stands, otherwise this would end up being one very lengthy post.

Before going over a few basic commands, make sure you download and install the latest version of PowerCLI.

Once you’ve installed PowerCLI, the next thing to do is connect to an ESXi host or vCenter Server. To do so, fire up the PowerCLI console and type the following commands;

The first cmdlet Connect-VIServer, as the name implies, is used to connect to an ESXi host or vCenter Server. A dialog box should pop up. This is where you type in the username and password you would normally use to access vCenter Server or ESXi. Alternatively, use the -user and -password command parameters to specify the credentials at the command line.

The 2nd line $vms=get-vm, initializes the variable $vms (the dollar sign indicates it as such) to the contents retrieved by the get-vm cmdlet. When working with PowerShell, you need to start thinking of variables in terms of objects with properties and methods, which is what the 3rd line $vms | get-member exposes. Figure 1 is the output from this line of code where the methods and properties of the objects referenced by $vms are boxed in green. 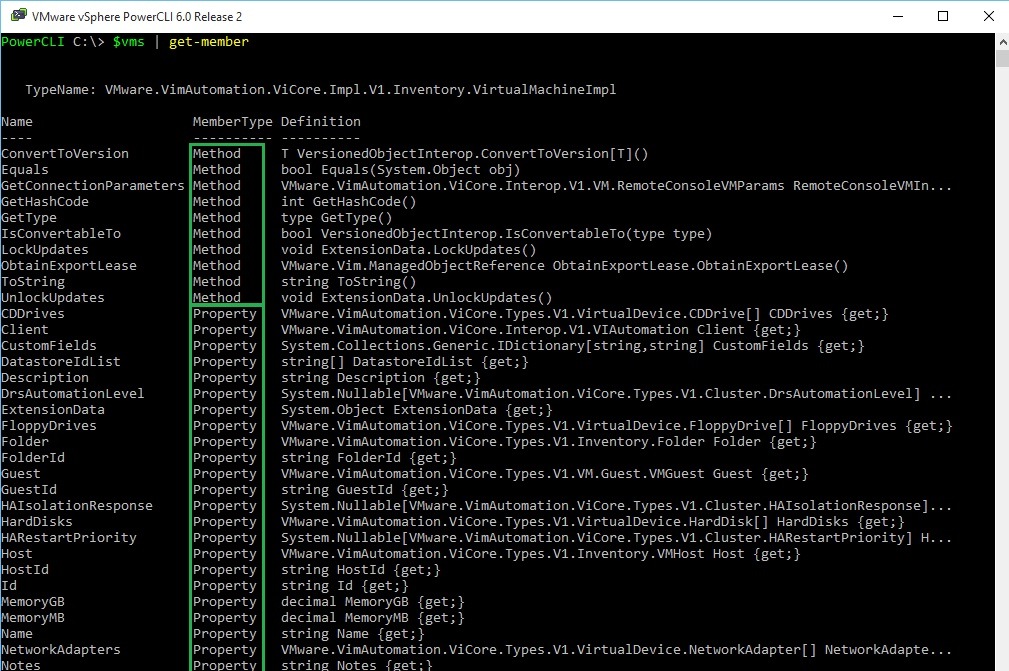 Figure 1 – An object’s method and properties

The $vms variable in reality represents an array of objects with every element corresponding to a specific vm. To test this, let’s display a random element followed by a count of the number of elements. We do this as follows;

This $vms[2] command returns only a subset of the properties associated with the object. $vms.count tells us there are 66 instances of this object. To view all the of the object’s properties type in any of the following;

You should also note that some properties are in fact objects which properties can be further expanded.  Think of them as being nested properties (see Figure 3).

Once such expandable property is guest. To find out which guest OS is installed on say the 5th vm in the array, you’d use;

If you want to apply a condition to narrow down the results returned, using the where-object cmdlet is one way of doing it. For instance, the following statement returns only those vms on which Windows Server 2008 has been installed;

Note the use of the | character by which the output of the previous command is pipelined into the next, a concept derived from UNIX and something which PowerShell excels at. I should also point out that $_ simply means the current object in the pipeline such that $_.OSFullName is in fact $vms[n].guest.OSFullName given the previous example.

Functions are another handy feature you can use to make your scripts both modular and easier to follow. Suppose for instance you want something that always returns a list of powered on vms. You could use a function similar to the one that follows (the output is seen in Figure 4). Better still, you can pipe the output into any other cmdlet since PowerShell is not at all concerned where the input originates from. Calling the function is a simple matter of typing its name. 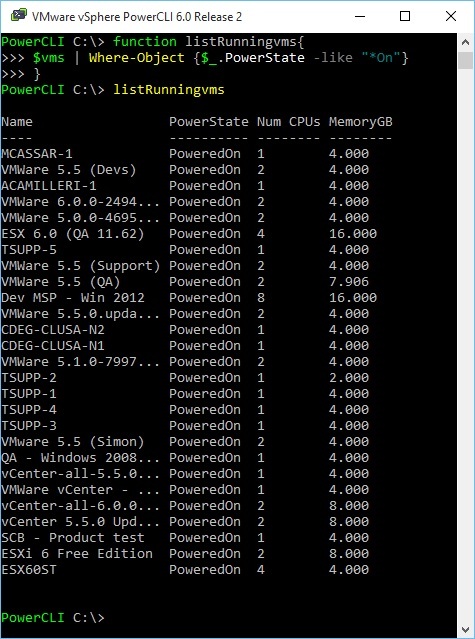 Figure 4 – An example of a function in PowerShell

We can easily convert the output of the function just described to HTML using the convertto-html cmdlet and the set-content cmdlet to write it to disk, like so;

However the result (Figure 5)  is not exactly eye-candy so it’s time for some fine-tuning to make the output a little bit more interesting. You can also see that the data listed under HardDisks doesn’t really make much sense. That’s because the data are in fact object references, meaning object expansion is needed to expose the underlying properties, something I mention further up. 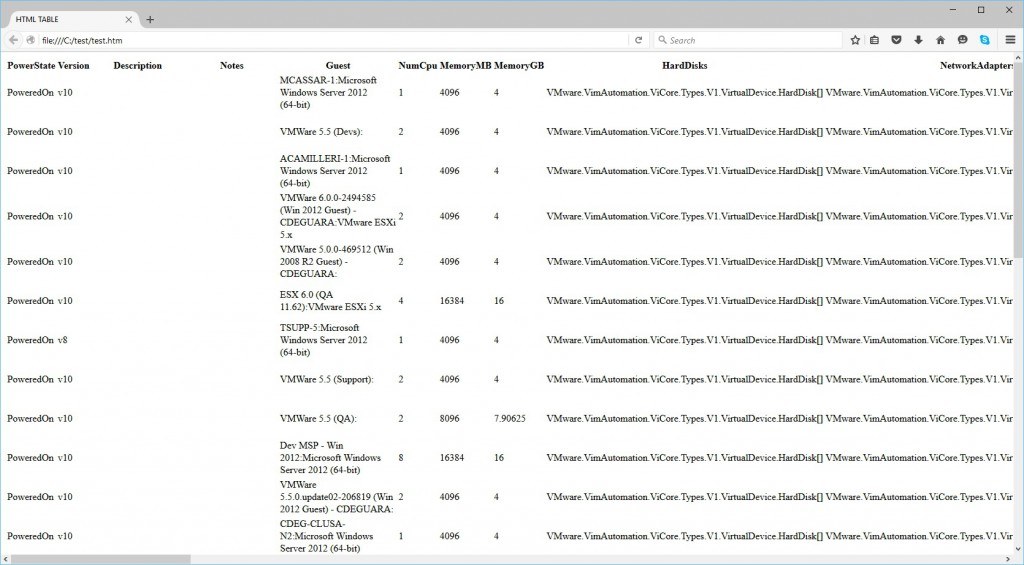 I suggest you first experiment with PowerShell in general and then PowerCLI if you’re still learning the ropes. There are plenty of resources available on the net as any search engine request will quickly reveal.

I’ll now quickly run through the script split up roughly into 4 parts, these being;

All we’re saying here is that the script will accept 4 command-line arguments or parameters. The first one, $hostIP is mandatory as in it cannot be omitted. The remaining arguments are optional and include the credentials needed to run the report against a vCenter Server or ESXi host together with a parameter corresponding to a vm property value used as a sorting criterion.

2) Next is a function called vmProperties whose job is to retrieve a set of vm properties using the get-view cmdlet. The retrieved property values are written to an array of objects of type PSCustomObject. This is needed for the convertto-html cmdlet which will only play nice when fed objects.

This is were most of the work is performed. The function takes as a parameter the results returned by the get-view call made from the script’s entry point. You can learn more about the get-view cmdlet here but if you’re familiar with database views, think of it as being a somewhat similar construct.

A for-loop iterates over the get-view results, populating $list with objects consisting of property values retrieved from every retrieved vm, like so (see full script further down);

You can see that the object comprises pair values consisting of a key name and a corresponding value. The function also includes a few conditional statements which are used to beautify the output and ensure that the correct number of property values are returned. For instance, the $vm.guest.net.ipaddress can either hold an array of values – if the vm has multiple IPs – or just one value if the vm has only been assigned a single IP address. To check for this, we use;

What I did is initialize $ips to the guest.net.ipaddress value. Next, I count the number of elements in $ips where a value greater than 1 would imply that multiple IP addresses have been assigned to the specific vm. If $ips.count=1 then we know that the vm will has only one IP address assigned. The same method is used to read and handle the MAC address property.

3) Next is a function called header which we use to format the HTML output. The convertto-html cmdlet takes on a -head argument which inserts a style element in the HTML document generated, pretty much like using a cascaded style sheet (CSS). Here you can learn more about styling and it’s really a matter of experimenting to see the effect each individual style tag has on the output. There’s actually little functionality in declaring the styling elements as a function other than to make the code more legible and to keep things tidy.

4) Last but not least is the script entry point. I start by declaring a couple of vars one of which contains the path to where the report will be written. You can change this as required. A set of conditional statements check whether the $sort command line argument has been specified or not. This sets the sorting criterion which can be one of four, the operating system type (os), the total memory on the host used by the vm (ramhost) or the memory allocated to the vm (ramalloc). If the argument is an empty string, the script defaults to using the vm’s name.

That out of the way, the script will drop any previous ESXi or vCenter Server connections. This prevents the script from pulling in results from another source other than that specified by the $hostIP command-line argument. Yet another conditional statement, checks if a user and password have been passed from the command-line. When these are omitted, the script falls over to using the ConnectVi-Server cmdlet without the -user and -pass parameters where a credentials dialog box is displayed instead.

Next we initialize $vmView to the results returned by get-view  making sure that view returned is of type VirtualMachine.

The next line of code is an example of how PowerShell is the undisputed champion of pipelining!

It does the following;

The script ends by disconnecting from the ESXi or vCenter Center and launching the default browser to display the report just written to disk. The latter is achieved as follows;

I’ve also included some basic error trapping using try and catch and the -ErrorAction argument which controls the behavior of a cmdlet when an exception is encountered. Again there are plenty of resources on the net many of which go into great detail.

And here’s the complete script;

And here’s the finished result after running the script from the command line like so ./listvms 192.168.11.5. 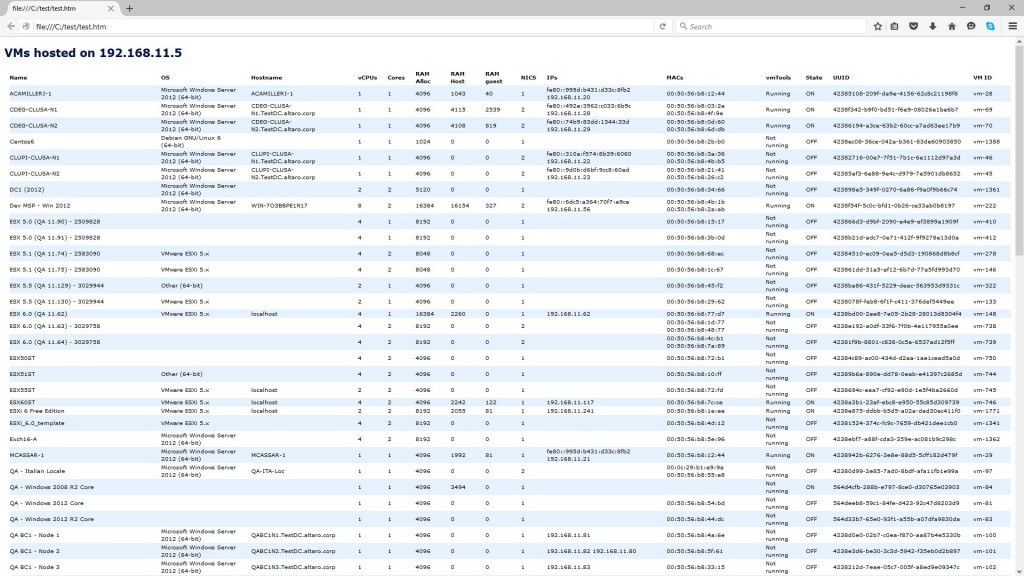 As you have seen PowerShell and PowerCLI are both great tools to master. In the long run they will make your life easier in terms of automation, management and reporting, just to name a few. The script reviewed today is only the tip of the iceberg in what you can do and achieve so get your hands dirty and start scripting!

14 thoughts on "How to generate a vSphere report using PowerShell"