How To Apply Virtual Machine Checkpoints in Hyper-V

Hyper-V Checkpoints (formerly known as snapshots) are something like an “undo” button for a Hyper-V virtual machine. As the name suggests, you set a marker at a particular point in time for the virtual machine. If you decide that you don’t like what’s happened to the virtual machine at any point after that, you can go back (revert) to that checkpoint. As we, and a great many others, have gone to great lengths to emphasize, checkpoints are in no way a replacement for backup; like an actual “undo” button, all of the changes made after the checkpoint are lost if you revert. There is something like a “redo” button; you are given the opportunity to take another checkpoint when you revert to an earlier one. However, no copies of the virtual machine are ever made. Only changes are tracked. Do not attempt to use this feature as a backup tool.

The purpose of this post is to give you a clear understanding of how to revert to a Hyper-V virtual machine checkpoint in Hyper-V and what happens when you do so to prevent you from having any scary moments of uncertainty when dealing with your own. The following virtual machine with the indicated snapshots will be the example that we’ll use in this post:

I didn’t rename these (it’s an option when you right-click) because I’m guessing that a lot of people will think to themselves, “I’ll remember what this is for,” even though they often don’t, and will leave them with their default time-stamped name. Although not shown here, you can click on any one of the checkpoints and in the bottom pane, a thumbnail of the screen as it was when the checkpoint was taken will appear. Unfortunately, it’s so small that unless you put a gigantic flag or something onscreen, it probably won’t be very useful. Double-clicking the thumbnail opens up VMConnect.exe to the current instance of the VM, so that’s not helpful either.

What these are intended to represent is various points along a path, such as application of patches in a sequence. For the sake of this discussion, let’s say that the very last patch turned into a nightmare and you just want to give up and go back. Your first option in that choice is to right-click on the virtual machine itself and choose Revert: 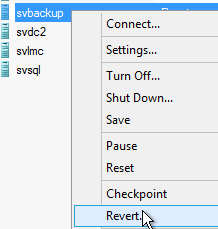 To apply checkpoint Hyper-V, and revert to the changes contained therein, you’ll be given a prompt (unless you chose to repress it) and then the very latest checkpoint virtual machine is applied. You are not asked to create a checkpoint of the current state first. Any changes made between the previous checkpoint and the current state will be irrevocably lost if you perform this action, and the text in the pop-up dialog does not tell you that. Unless you are absolutely certain that’s what you want to do, I would counsel you to stay away from this option.

Instead, use the apply technique. Let’s say that, even though we suspect that the very latest patch is what broke our Hyper-V virtual machine, we want to go back to a time before the patch before that was applied and see if perhaps there was a particular setting that we forgot to change. But, we’re not absolutely certain that’s what the problem is, either. We can handle that with apply. Right-click on the checkpoint that represents the time before that patch and click Apply:

The following prompt will be shown:

TIP: I recommend never selecting the option to suppress this prompt because I’m not sure which option it takes as the default and I have a hard time believing that anyone will know in advance that they’ll make the same choice for 100% of all checkpoints. In this case, because we’re not entirely certain whether or not we want to lose this state, we are going to click Create Checkpoint and Apply. Since we’re jumping back in time and we are keeping the current state, this operation will proceed differently than a normal checkpoint. The very first thing that will happen is that the virtual machine will be placed in a saved state. Then a checkpoint of the current status will be taken. This is mainly just to get it into the view; unlike a normal checkpoint, this one won’t change anymore. Then the indicated checkpoint will be restored. Now, our tree looks like this:

Checkpoint: Middle of the Tree

What’s going on now is that the current state is a differential starting from the checkpoint state immediately above it. The other two below it are dormant. If something happens to their files, you won’t be able to recover those snapshots but the virtual machine will be able to continue running and the current state could be merged back to the root. Any further checkpoints will exist under the new parallel branch. What’s most important to understand here is that the currently running virtual machine does not contain any of the changes that were made in the two snapshots underneath the Now state. Since, in our fictional story, we said that each one of those represents a patch that was installed, neither of those patches exist in the running virtual machine.

A few things to be aware of, some worth repeating, when applying a snapshot:

To properly protect your Hyper-V virtual machines, use Altaro VM Backup to securely backup and replicate your virtual machines. We work hard perpetually to give our customers confidence in their Hyper-V backup strategy.

To keep up to date with the latest Hyper-V best practices, become a member of the Altaro DOJO | Hyper-V now (it’s free).

Checkpoints are a tool with a purpose and should be used in line with best practices such as not viewing them as a backup solution, removing them when no longer needed, and considering potential performance implications. Also, be cautious of very “state and data-sensitive” technologies that do not work well with rolling back to a specific point-in-time, such as domain controllers. Remember that “snapshots” are the legacy term for Hyper-V checkpoints and are much more closely associated with VMware virtualization technologies.

Hyper-V checkpoints are a powerful capability found in Hyper-V virtualization that can support many modern use cases that are simply not possible with traditional bare-metal workloads.

What is a Hyper-V checkpoint?

What is the difference between checkpoint and snapshot?

There can be confusion in terminology with Hyper-V snapshot vs checkpoint. While Hyper-V checkpoints were previously referred to as snapshots, the new reference to the technology is referred to as checkpoints moving forward. Hyper-V snapshots referred to the “standard” checkpoint as it captured the memory state along with the disk contents. This can lead to consistency problems with systems that replicate data. Snapshots are a term used in the VMware ecosystem to refer to the comparable capability to capture point-in-time state data.

Can I delete the checkpoint in Hyper-V?

Checkpoints can easily be deleted from a virtual machine. The delete checkpoint Hyper-V process is straightforward. The changes captured in the differencing disks (AVHDX files) are rolled into the parent disk. So, in essence, “deleting” a checkpoint is a bit of a misnomer. The data contained in the snapshot isn’t actually deleted, but, again, is rolled into the parent disk. The exception to this is rolling back to a snapshot in the middle of the chain and then deleting the checkpoints that are found later in the chain. This is also referred to as a Hyper-V checkpoint merge operation.

What are the two different types of checkpoints?

How many checkpoints can be created for a single VM?

While it would be difficult to think of a use case where it would be desirable to use the maximum number of Hyper-V checkpoints possible, a Hyper-V virtual machine can contain up to 50 Hyper-V checkpoints. It is important to understand the performance implications when large numbers of checkpoints are attached to a Hyper-V virtual machine. Typically, a use case for VMs with several checkpoints on a virtual machine may include replicated VMs created from a backup solution that maintain a specific number of snapshots on the replica to offer several rollback options for the replica to enter production if needed.