How to Compact a VHDX with a Linux Filesystem

Microsoft’s compact tool for VHD/X works by deleting empty blocks. “Empty” doesn’t always mean what you might think, though. When you delete a file, almost every file system simply removes its entry from the allocation table. That means that those blocks still contain data; the system simply removes all indexing and ownership. So, those blocks are not empty. They are unused. When a VHDX contains file systems that the VHDX driver recognizes, it can work intelligently with the contained allocation table to remove unused blocks, even if they still contain data. When a VHDX contains file systems commonly found on Linux (such as the various iterations of ext), the system needs some help.

Before we start, a warning: don’t even bother with this unless you can reclaim a lot of space. There is no value in compacting a VHDX just because it exists. In my case, I had something go awry in my system that caused the initramfs system to write gigabytes of data to its temporary folder. My VHDX that ordinarily used around 5 GB ballooned to 50GB in a short period of time.

Begin by getting your bearings. df can show you how much space is in use. I neglected to get a screen shot prior to writing this article, but this is what I have now:

Clean up as much as you can. Use apt autoremove, apt autoclean, and apt clean on systems that use apt. Use yum clean all on yum systems. Check your /var/tmp folder. If you’re not sure what’s consuming all of your data, du can help. To keep it manageable, target specific folders. You can save the results to a file like this:

You can then open the /home/<your account>/var-temp-du file using WinSCP. It’s a tab-delimited file, so you can manipulate it easily. Paste into Excel, and you can sort by size.

As I mentioned before, I had gigabytes of files in /var/tmp created by initramfs. I’m not sure what it used to create the names, but they all started with “initramfs”. So, I removed them that way: rm /var/tmp/initramfs* -r. That alone brought me down to the lovely number that you see above. However, as you’re well aware, the VHDX remains at its expanded size.

Zeroing a VHDX with an ext Filesystem

I assume that this process will work with any file system at all, but I’ve only tested with ext4. Your mileage may vary.

Because the VHDX cannot parse the file system, it can only remove blocks that contain all zeros. With that knowledge, we now have a goal: zero out unused blocks. We’ll need to do that from within the guest.

My personal favorite method for handling this is the “fstrim” utility. Reasons:

On my system that had recently shed over 70 GB of fat, fstrim completed in about 5 seconds.

Note: according to some notes that I found for Ubuntu, it automatically performs an fstrim periodically. I assume that you’re here because you want this done now, so this information probably serves mostly as FYI.

If fstrim doesn’t work for you, then we need to look at tools designed to write zeros to unused blocks.

I would caution you away from using security tools.  They commonly make multiple passes of non-zero writes for security purposes on magnetic media. That’s because an analog reader can detect charge levels that are too low to register as a “1” on your drive’s internal digital head. They can interpret them as earlier write operations. After three forced writes to the same location, even analog equipment won’t read anything. On an SSD, though, those writes will mostly reduce its lifespan. Also, non-zero writes are utterly pointless for what we’re doing. Some security tools will write all zeros. That’s better, but they also make multiple passes. We only need one.

Create a File from /dev/zero

Linux includes a nifty built-in tool that just generates zeroes until you stop asking. You can leverage it by “reading” from it and outputting to a file that you create just for this purpose.

On a physical system, this operation would always take a very long time because it literally writes zeros to every unused block in the file system. Hyper-V will realize that the bits being written are zeroes. So, when it hits a block that hasn’t already been expanded, it will just ignore the write. However, the blocks that do contain data will be zeroed, so this can still take some time. So, it’s not nearly as fast as fstrim, but it’s also not going to make the VHDX grow any larger than it already is.

The “zerofree” package can be installed with your package manager from the default repository (on most distributions). It has major issues that might be show-stoppers:

If you mount it in a foreign system, run sudo lsblk -f to locate the attached disk and file systems:

Verify that the target volume/file system does not appear in df. If it shows up in that list, you’ll need to unmount it before you can work with it.

I’ve highlighted the only volume on my added disk that is safe to work with. It’s a tiny system volume in my case so zeroing it probably won’t do a single thing for me. I’m showing you this in the event that you have an ext2 or ext3 file system in one of your own Linux guests with a meaningful amount of space to free. Once you’ve located the correct partition whose free space you wish to clear:

In my research for this article, I found a number of search hits that looked somewhat promising. If nothing here works for you, look for other ways. Remember that your goal is to zero out the unused space in your Linux file system.

The compact process itself does not differ, regardless of the contained file system. If you already know how to compact a dynamically-expanding VHDX, you’ll learn nothing else from me here.

As with the file delete process, I always recommend that you look at the VHDX in Explorer or the directory listing of a command/PowerShell prompt so that you have a “before” idea of the file.

Use PowerShell to Compact a Dynamically-Expanding VHDX

The owning virtual machine must be Off or Saved. Do not compact a VHDX that is a parent of a differencing disk. It might work, but really, it’s not worth taking any risks.

Use the Optimize-VHD cmdlet to compact a VHDX:

The help for that cmdlet indicates that -Mode Full “ scans for zero blocks and reclaims unused blocks”. However, it then goes on to say that the VHDX must be mounted in read-only mode for that to work. The wording is unclear and can lead to confusion. The zero block scan should always work. The unused block part requires the host to be able to read the contained file system — that’s why it needs to be mounted. The contained file system must also be NTFS for that to work at all. All of that only applies to blocks that are unused but not zeroed. The above exercise zeroed those unused blocks. So, this will work for Linux file systems without mounting.

Use Hyper-V Manager to Compact a Dynamically-Expanding VHDX

Hyper-V Manager connects you to a VHDX tool to provide “editing” capabilities. The options for “editing” includes compacting. It can work for VHDX’s that are attached to a VM or are sitting idle.

Start the Edit Wizard on a VM-Attached VHDX

Open the property sheet for the virtual machine. On the left, highlight the disk to compact. On the right, click the Edit button. 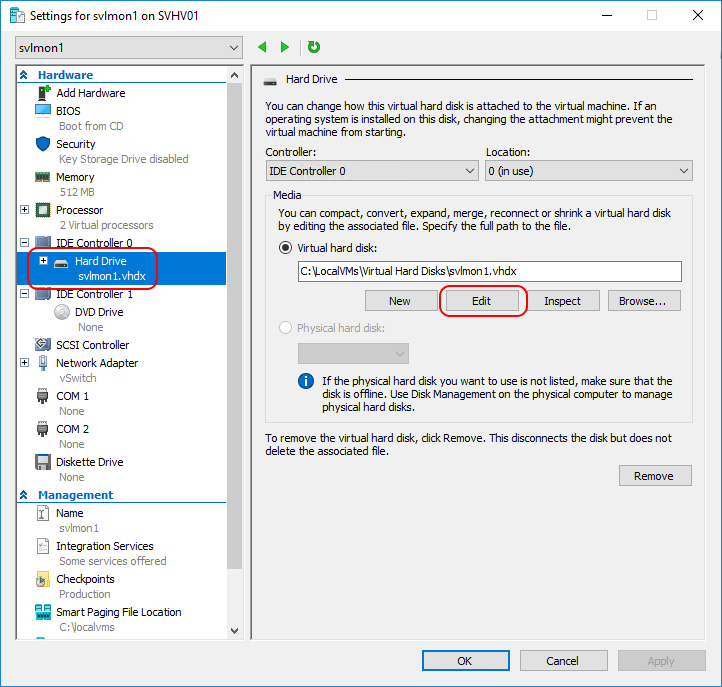 Jump past the next sub-section to continue.

Start the Edit Wizard on a Detached VHDX 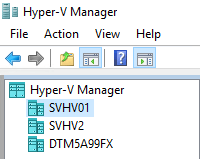 Now, you can either right-click on that host and click Edit Disk or you can use the Edit Disk link in the far right Actions pane; they both go to the same wizard. 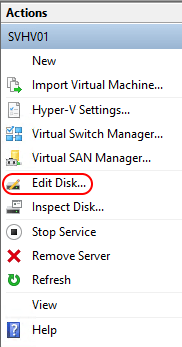 The first screen of the wizard is informational. Click Next on that. After that, you’ll be at the first actionable page. Read on in the next sub-section.

Using the Edit Disk Wizard to Compact a VHDX

Both of the above processes will leave you on the Locate Disk page. The difference is that if you started from a virtual machine’s property sheet, the disk selector will be grayed out. For a standalone disk, enter or browse to the target VHDX. Remember that the dialog and tool operate from the perspective of the host. If you connected Hyper-V Manager to a remote host, there may be delegation issues on SMB-hosted systems. 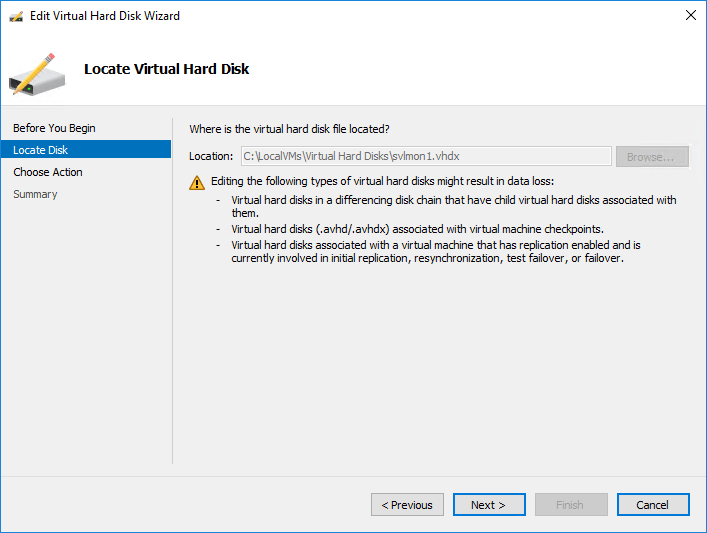 On the next screen, choose Compact: 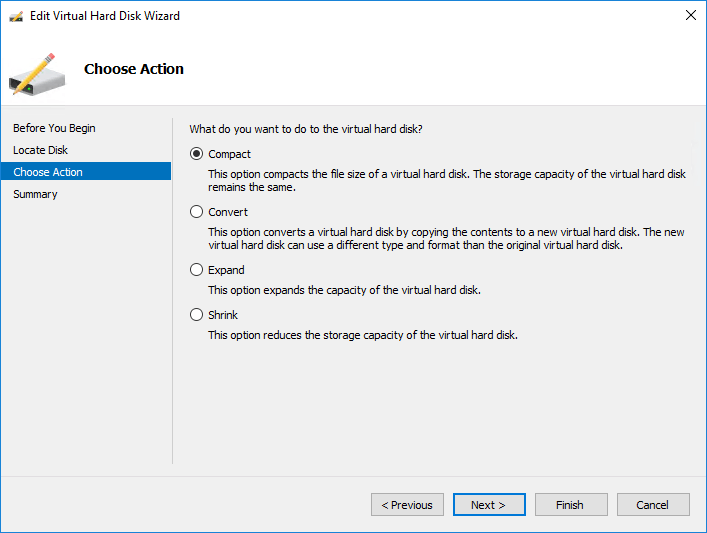 The final page allows you to review and cancel if desired. Click Finish to start the process: 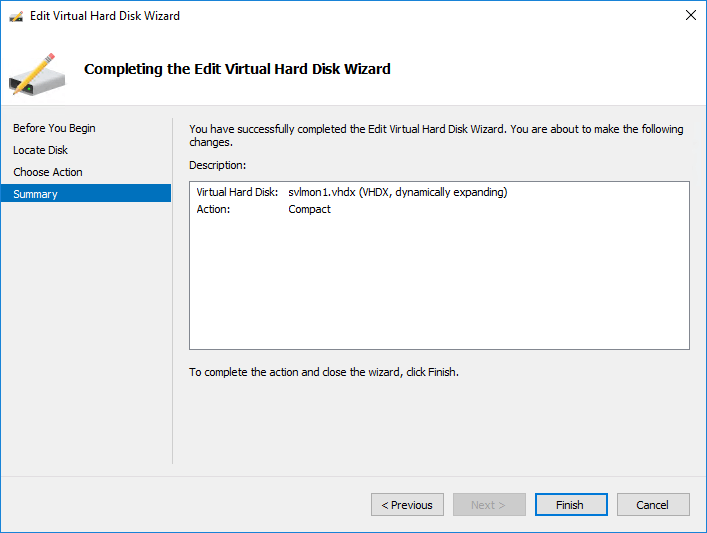 Depending on how much work it has to do, this could be a quick or slow process. Once it’s completed, it will simply return to the last thing you were doing. If you started from a virtual machine, you’ll return to its property sheet. Otherwise, you’ll simply return to Hyper-V Manager.

Locate your VHDX in Explorer or a directory listing to ensure that it shrank. My disk has returned to its happy 5GB size: