In the first part of the PowerShell Cmdlets guide, we had a detailed look at what a PowerShell cmdlet is, how to use cmdlets, built-in cmdlets, and useful cmdlets. If you want to give that one a look, head here. As we get into the second part of this guide, we will begin by looking at how to write your own PowerShell cmdlet. We will then have a discussion on modules and what they are used for, after which we will have a look at PowerShell, PowerShell Core and their differences. Let’s dig in!

Writing your own PowerShell cmdlet

Now that we have covered the basics, let’s take a practical example and have a walkthrough of creating the PowerShell Send-Greeting cmdlet, documented here. We are using Visual Studio 2017 to create a new project, import the code and all dependencies, build the .dll file and import it into PowerShell Core (Note: We will discuss the differences between PowerShell and PowerShell Core in the following section.) 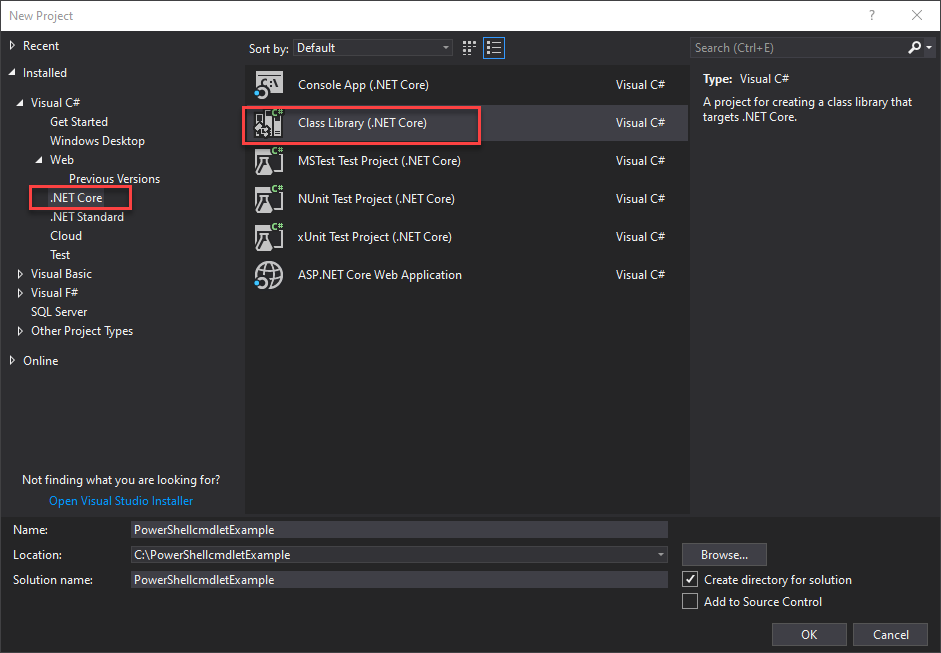 In the Solution Explorer, right-click the Dependencies and select Manage NuGet Packages. 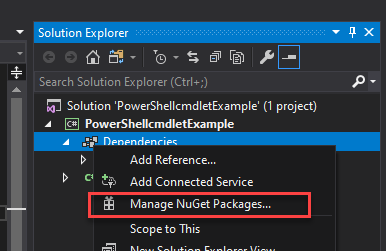 Click the “green plus” sign to add a new package source. We will define a PowerShell Core source. 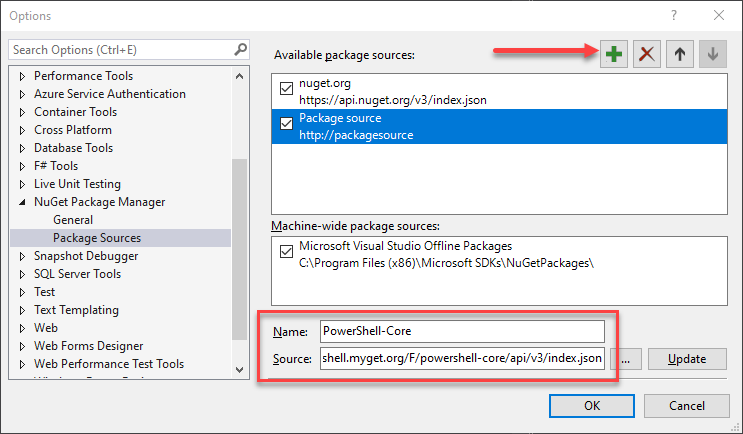 Click Browse on the Nuget Package Manager and type system.management.automation. Then click the “down arrow” next to the version. This will install the package. 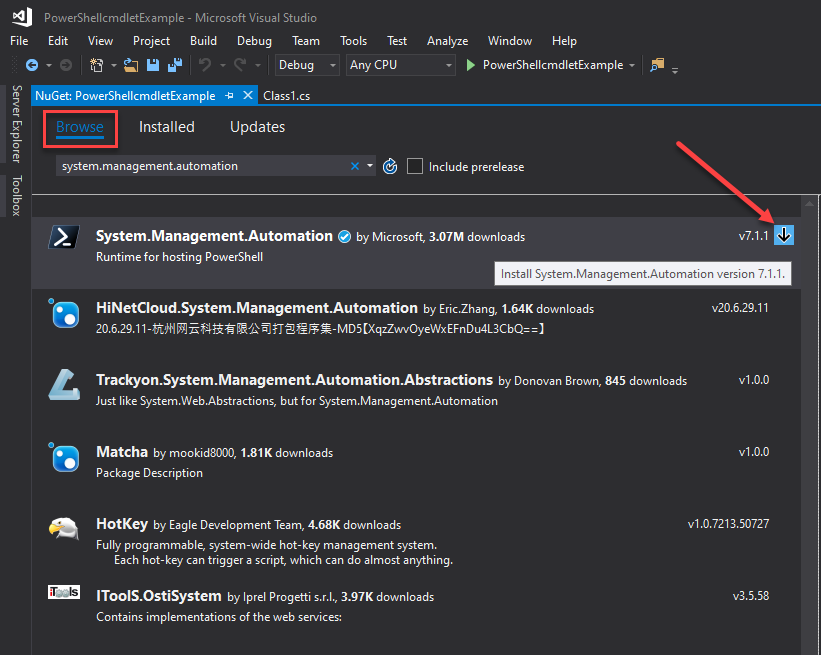 Next, click the Class1.cs tab and paste the Microsoft-provided code for the example cmdlet. 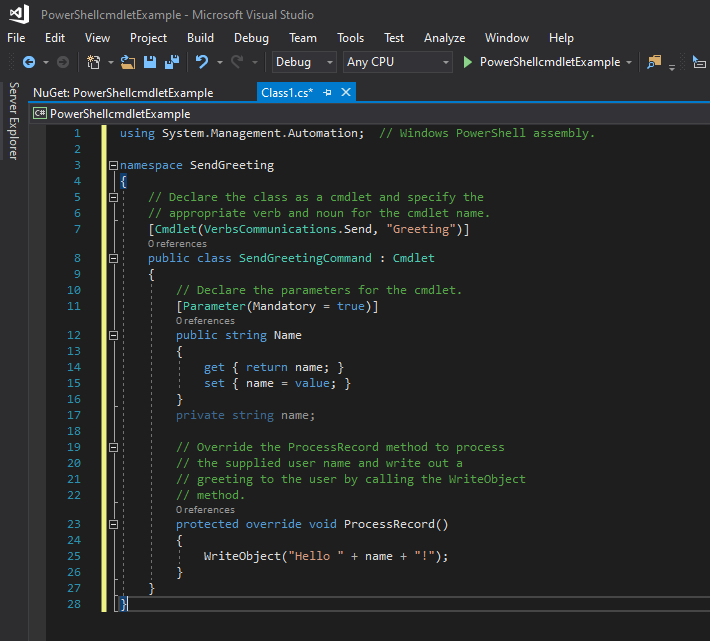 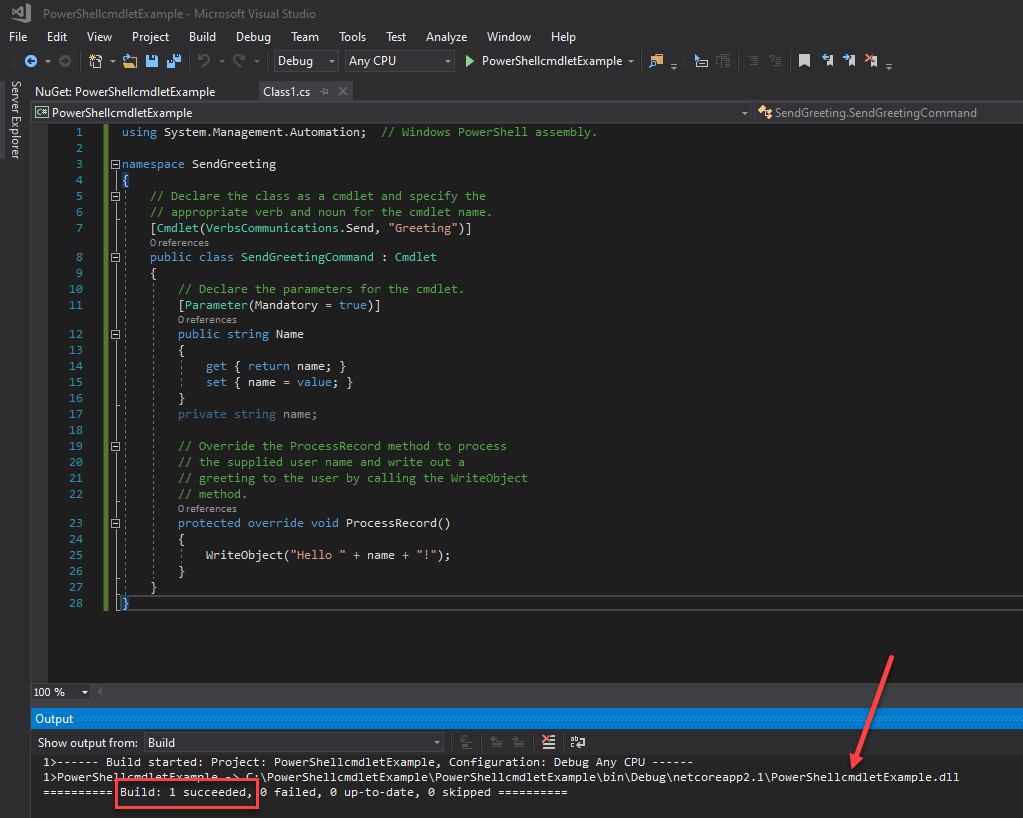 Build the .dll file for the PowerShell cmdlet

All that is left to do is import the .dll file into PowerShell and the cmdlet will be available. Here we are testing the new Send-greeting cmdlet. It works as expected. 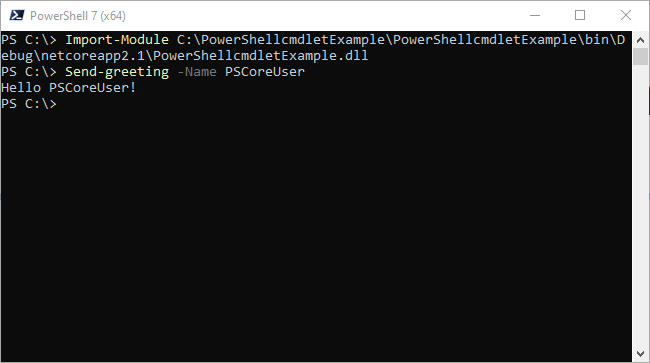 Import the module and run the new cmdlet

After getting the hang of writing your own cmdlet, you will probably want to write more cmdlets that may be related. For those of you who write cmdlets, it’s useful to know that you can use PowerShell modules to share these with others. A module is simply a package of PowerShell cmdlets and providers. Interestingly, all cmdlets and providers in your PowerShell session are added by way of modules or snap-ins and are stored this way.

Snap-ins are the older way of importing cmdlets into PowerShell and have limitations such as having to be available as an Assembly and Windows registry requirements. Modules do not have many of the limitations of snap-ins and are not reliant on being registered in the Windows registry. 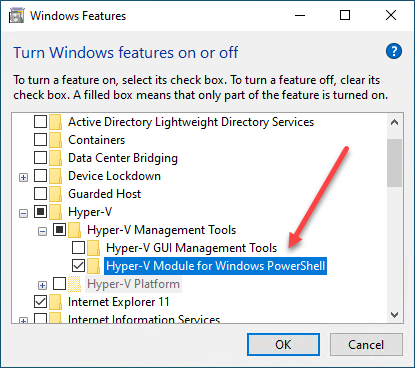 You can also use PowerShell to add the Hyper-V PowerShell Module for Hyper-V. You can do this by using the following PowerShell cmdlet:

There are many other Microsoft products and solutions that provide an easy way to interact with PowerShell. You will find PowerShell modules for the likes of:

Write-Warning -Message (‘Az module not installed. Having both the AzureRM and ‘ +

‘Az modules installed at the same time is not supported.’)

By default, the PowerShell gallery is not a trusted repository for PowerShellGet.

The first time you use the PSGallery, you see the following prompt:

Note below. You can use the “| more” pipeline to see the results a section at a time.

Finding the PSWindowsUpdate Powershell module from the PowerShell Gallery

Before beginning to interact with PowerShell and before creating your own PowerShell cmdlets, it will come in handy to understand the differences between PowerShell and PowerShell Core as choosing to use either will have implications on the capabilities and functionality of PowerShell.

Legacy PowerShell 5.x will continue to receive enhancements and security updates. Still, the focus will be shifting applications and scripts to use PowerShell Core in most environments unless there is a current incompatibility between a specific application and the newer PowerShell Core platform. One of the significant features of PowerShell Core, being built on .NET Core, is that it is a cross-platform architecture. In other words, with PowerShell Core, you can now have PowerShell on Windows, Mac, and Linux!

After downloading the official release from the Github page, it is as simple as running the installation of PowerShell Core. The installation is a straightforward “next, next, finish” process. 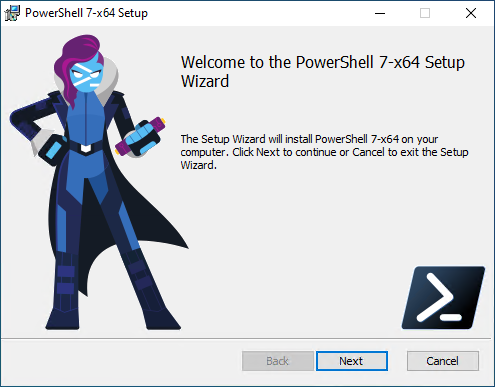 There are several options available to configure when installing PowerShell Core. Below, the default settings are listed. As you can see, you can configure PowerShell remoting and other optional features during the installation. 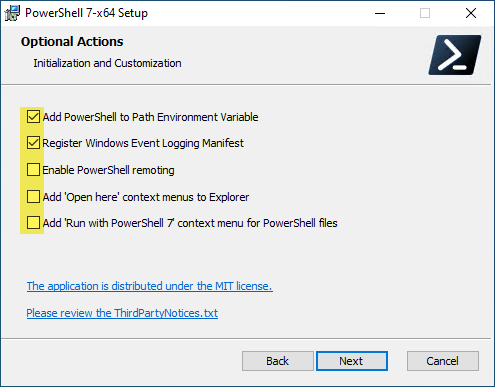 After installing, you can launch PowerShell Core along with the legacy version of PowerShell 5.x, all from the same Windows 10 machine. You will note a difference between the two PowerShell windows. The new PowerShell Core prompt has a black background by default, while the standard PowerShell has a blue background. 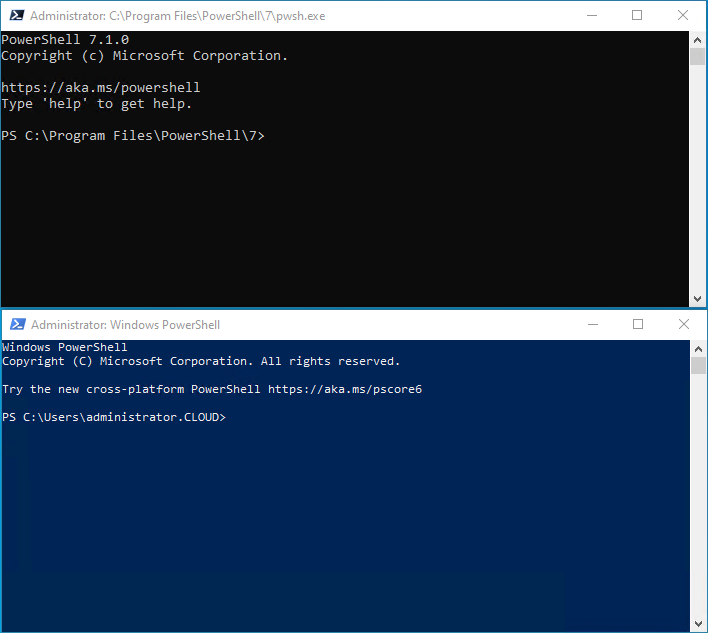 Of interest on PowerShell cmdlets, with the newest version of PowerShell Core, PowerShell Core 7.x, Microsoft has improved backwards compatibility with legacy Window PowerShell modules. It makes use of .NET Core 3.1 and allows PowerShell users to make use of many of the modules on Windows that require GUI functionality like Out-GridView and Show-Command.

Are PowerShell cmdlets worth using?

Spoiler alert, yes they are! PowerShell and, by extension, PowerShell cmdlets provide a powerful way to automate and interact with modern infrastructure. You can use PowerShell effectively on-premises or in the cloud. PowerShell cmdlets offer an easy and intuitive way to write object-oriented code, with little coding experience in other languages. The verb-noun syntax is easily understood and “makes sense” to most. IT administrators across many different disciplines have embraced PowerShell and using PowerShell cmdlets for writing scripts to manage and automate their environments. Most modern software and hardware vendors are providing PowerShell modules for interacting with and automating their respective platforms.

I hope you found this guide useful, and if you have started writing your own PowerShell Cmdlets by now, congratulations! Be sure to share them in the comments and let me know if you have any questions.

PowerShell Cmdlets: What they are and how to use them – Part 1

Bicep vs. Terraform: Which Should You Choose?

Why Should you use Azure over AWS?