Why You Should Be Compacting Your Hyper-V Virtual Disks

Hyper-V’s dynamically expanding virtual hard disks (VHD/VHDX) provide numerous benefits. I suspect that most of us use them to achieve efficient use of physical storage. However, their convenience does come with a maintenance cost. They grow as needed, but they will never release any space unless you manually intervene (it could be scripted if you so desire). In this article, we’ll cover the reasons, prerequisites, and steps necessary to reclaim unused space from your dynamically-expanding VHDXs.

Sometimes definitions for “compact” and “shrink” get crossed when talking about VHDXs. They do not mean the same thing and you use completely different operations to achieve them.

Every virtual hard disk type (fixed, dynamically-expanding, and differencing) has a fixed upper size limit. “Shrinking” a VHDX reduces that limit. Any of the types can be shrunk. “Compacting” does not change the upper limit at all. Instead, it reduces the physical disk space consumed by a dynamically-expanding or differencing VHDX by removing empty blocks. I’ll explain what a “block” means to these VHDXs in the next section. You can run a compact operation on any of the types, but it will never have any effect on a fixed VHDX (the graphical interface screens will not even allow you to try). For more information on the shrink process, refer to our earlier article on the issue.

What Does “Compact” Mean for Hyper-V Virtual Hard Disks

Dynamically-expanding VHDXs function is a straightforward process. When created, each has a specific, permanently-set “block size”. When a guest operating system or some external action attempts to write information into the VHDX, the VHDX driver first checks to see if the file contains sufficient space in unclaimed blocks for that data. If it does, then the write proceeds. If it does not, the VHDX driver expands the physical file by the minimum number of blocks needed to contain the write.

However, when a process deletes a file (or uses some other technique to clear data), the VHDX driver does not do anything with the block. Most importantly, it does not automatically remove empty blocks from the file. I’ve read a fair number of complaints on that, but they lack merit. To maintain such a thing would be inherently dangerous and prohibitively expensive in terms of IOPS.

Instead, we manually initiate the compact process. The system scans the data region of the VHDX, looking for completely empty blocks. When it finds one, it removes it from the file. I’m not aware of the precise mechanism that it uses, but I suspect that it simply finds the next used block and shifts it backward, eventually lopping off the end of the file. 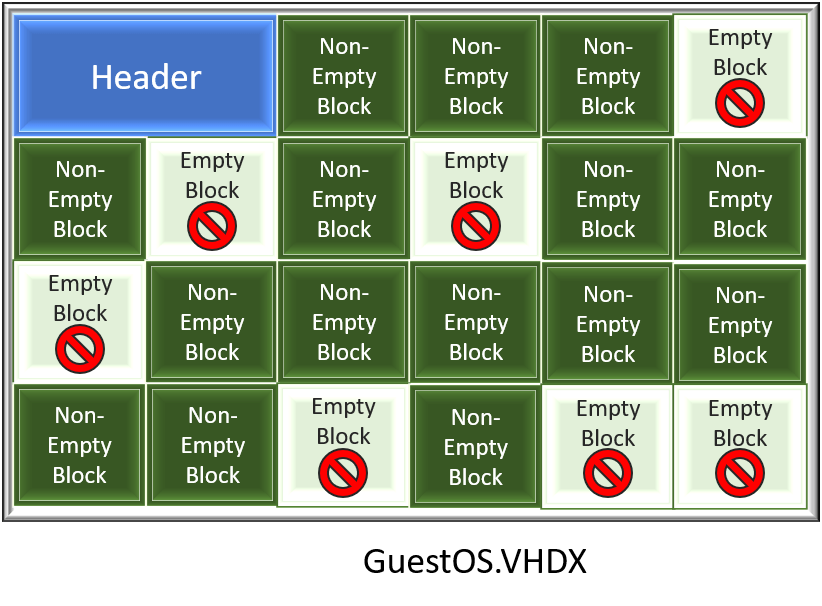 Why Should I Compact Hyper-V Virtual Hard Disks?

Physical systems rarely use up all of their disk space. The same can be said for virtual systems. Therein lies the primary reason to use dynamically-expanding virtual hard disks. I especially like them for VHDXs that contain operating systems when you’ll be placing data on different VHDXs. I’ve got some VHDXs nearing five years of age that have a 60GB maximum but still use only around 25GB on disk. With many OS VHDXs, that quickly adds up to a great deal of saved storage. That’s only one example, though; I generally use dynamically-expanding VHDX in any case where I know it won’t cause problems (high-churn database systems would be a poor usage for them).

However, sometimes operations occur that consume an inordinate amount of disk space. Sometimes space is just used and there’s nothing you can do about it. Other times, the usage is only temporary. For example, you might copy several ISO files to the C: drive of a guest in order to perform a local software installation. If you’re doing in-place operating system upgrades, they’ll make a duplicate of the existing installation so that you can perform a rollback. A system may begin life with an oversized swap file that you later move to a different VHDX, leaving behind gigabytes of unused space. I always compact VHDXs with sysprepped operating systems that I will use as templates.

Why Should I NOT Compact Hyper-V Virtual Hard Disks?

“Premature optimization is the root of all evil.” — Donald Knuth

I often complain about administrators that arbitrarily guess that their disk performance needs will be so great that anything other than fixed (or, egads, pass-through) is unacceptable. At the other end of the spectrum, some administrators became agitated when their VHDXs consume even a few gigabytes above their minimum. Most dynamically-expanding VHDXs will eventually find some sort of “normal state” in which they can re-use space from deleted data (example: Windows Updates).

I can’t give you a fine description of when a compact operation becomes viable, but do not use it to try to squeeze every last drop of space out of your system. You’ll eventually lose that battle one way or another. Do not compact over minor gains. Do not compact VHDXs that will never find any reasonable steady state (such as file servers). Do not compact as part of some routine maintenance cycle. If you have set up an automated script because your systems constantly approach the hard limits of your storage, spend the money to expand your storage. Compacting requires downtime and equipment wear, so it’s not free.

How Do I Use PowerShell to Compact a VHDX?

The process centers around the Optimize-VHD cmdlet. In general, you’ll want to mount the VHDX into the management operating system to get the best results. For example:

Be aware that even for very small files, that can take some time to complete. The amount of time depends mostly on your available CPU cycle and the speed of your disk subsystem.

You can easily convert the above three lines into a re-usable utility:

You can dot-source that or add it to your PowerShell profile to use it anytime.

What Do the Different VHDX Compact Modes Mean?

If you read the help or tab through the options for the -Full parameter, you’ll see several choices. I feel like the built-in help describes it well enough, but more than a few people have gotten lost in terms with similar meanings. A bit of clarity:

Hopefully, that helps smooth out explanations of the modes:

Only the Full mode directly scans the file for empty blocks. The others work only with the VHDX and/or guest file system metadata.

How Do I Use Hyper-V Manager to Compact a VHDX?

Hyper-V Manager can compact a disconnected VHD/X or one attached to a powered-off virtual machine. It does not perform a very thorough job, though. I do not know which method it uses, but you’ll discover very quickly that it is not the equivalent of PowerShell’s “Full”. Whatever technique it uses, it will not automatically mount the VHDX.

Both ways invoke the same wizard.

Can I Compact a VHDX that has Differencing Children?

The system will not prevent you from compacting a VHDX that has children unless one of the children is in use. If you manage to compact the parent VHDX, you will break the parent-child relationship.

What About VHDXs that Contain Non-Microsoft File Systems?

The Full mode will detect fully empty blocks, but cannot interact with any non-Microsoft file system metadata to locate unused blocks. However, most modern filesystems now support trim/unmap. If you can perform that operation within the guest operating system, you can then perform a Full optimize pass to shrink the VHDX. I wrote an article on compacting VHDXs with Linux filesystems that have more information.

Why Does the Compact Operation Save Nothing or Very Little?

The simple answer is that the blocks are not empty. If a block contains a single non-zero bit, then the entire block must be kept. You cannot see the VHDX’s blocks from within the guest. Short of some sort of file scanner, I don’t know of any way to view the blocks aside from a hex editor.

Some tips on cleaning up space:

If you’re really stuck, you can use a tool like robocopy or rsync to move the files into a completely new VHDX.

What Block Sizes are Valid for a Dynamically-Expanding VHDX?

By default, all VHDXs will have a 32 megabyte block size. You can only change that at creation time when using New-VHD. Set the BlockSizeBytes parameter as desired. Unfortunately, they don’t list possible values so it’s a bit of trial and error. I tried 1MB, 8MB, 16MB, 64MB, and 256MB sizes with success, in addition to the default 32MB. 512 bytes failed, as did 512MB.

Only PowerShell’s Get-VHD can show you the block size. 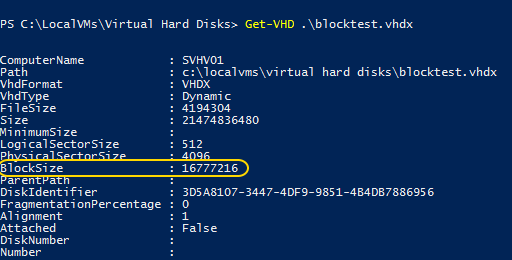 What Block Size Should I Use?

With small block sizes, scattered small files will be less likely to result in a VHDX with a great many almost-but-not-quite empty blocks. For the various ext* filesystems found on Linux, a 1MB block size can greatly reduce your VHDX sizes. The greatest downside is that you might get a lot of fragmentation of the physical VHDX. Then again, you might not. It depends on how the writes occur. Infrequent small writes will result in more fragmentation. If you use robust, modern storage, then fragmentation is not usually a major concern.

Large block sizes don’t have much to offer. If you were to store a rarely-accessed archival database in a dynamically-expanding VHDX with block sizes that match your guest OS’s allocation unit size, you might, in theory, see something improve. Probably not, though.

I recommend that you stick to the default 32mb block size for any guest that doesn’t use an ext filesystem. Use 1MB block sizes for those, if you remember.