How to Get Hyper-V Time Synchronization Right

Are there any bumper stickers or t-shirts out there that say, “I was using Hyper-V before using Hyper-V was cool?” If there are, I think I need one.

I built my first production system on Hyper-V 2008 R2 not long after it debuted. So, I missed the early-adopter crowd by a couple of years but I’ve definitely been in this for a while. The only problem with sticking with a tech as it grows from infancy is that sometimes things change and you miss out. One of the things that changed on me was the way that time synchronization works between Hyper-V and its guests. There’s only been a single casualty that I know of, and that is the virtualized domain controller.

To save you the trouble of jumping around and reading a lot of other articles, I’ll give you a bit of necessary backstory.

In a Windows domain configured with defaults, the domain controller that holds the Primary Domain Controller Emulator (PDC Emulator) flexible single master operations (FSMO) role is considered the authoritative time source for the entire domain. One way or another, every single other computer in the entire domain gets its time from that single source. As a result, it’s quite important for the time on that system to be correct. What most people do, and what I explained how to do in the first article that I linked above, is configure the PDC emulator to continually update its own time from a known valid external source.

A typical virtual machine is configured to get its time directly from the Hyper-V host. This eliminates all sorts of concerns, such as guests in different domains or workgroups and lots of needless time synchronization network traffic. What it’s an especially good solution for is the somewhat unique nature of the virtual machine. Using the Save State operation, it is possible to put a virtual machine into a sort of suspended animation for an effectively infinite amount of time. When a virtual machine is resumed from this state, it has absolutely no idea that anything happened at all. As a result, its clock will be set to the exact time that the save operation was conducted. If that was fairly recent, then there shouldn’t be a problem, especially for a modern operating system. It will eventually seek out an authoritative time source. A problem arises when the clock is very different.

Due to security concerns, there is a maximum time differential of only five minutes between a client and server in a Kerberos conversation or the two systems are considered skewed. The upshot of skewed systems varies wildly. A Windows client desktop might be a few days behind and the only consequence is a lot of logged warnings and errors. An Exchange Server system will panic at a very small skew. If a clock is really skewed, then it will have lots of strange issues, especially when dealing with SSL certificates. However, there is a maximum amount of skew beyond which a domain controller will not update a client that asks for a time synchronization. This problem is directly solved for Hyper-V guests via the Hyper-V Time Synchronization Service.

The explanations that you can find about this service really are not entirely accurate, and some things appear to have changed over time. I did a fair bit of testing, and, as of 2012 R2, this is how Hyper-V and the Hyper-V Time Synchronization Service interact with a guest virtual machine:

In almost all cases, you will want the synchronization service to be enabled for every guest. The reason is simply because there’s not much of a reason not to. The biggest risk is that the host’s time will drift, which will cause all the guests to drift. That’s why it’s very important to ensure that the host is configured to synchronize against an authoritative source regularly. The instructions were linked above, but here’s the link again.

The subject of time synchronization for virtualized domain controllers has always been a controversial issue. Some people were never able to get it to work correctly at all. Others had mixed success. Now, with the partial disable registry entry not working, virtual domain controllers are the one true exception to the “every guest” rule. The Hyper-V Time Synchronization Service must be disabled for the PDC emulator. If not, and its host ever loses time, then the entire domain will eventually shift and won’t recover on its own.

Worse, during my testing, a shift of more than a few minutes caused failures in things such as remote desktop connections until the entire domain had picked up on the new time. While not quite as critical, time synchronization should also be disabled for any other virtualized domain controllers. The final configuration should follow these rules: 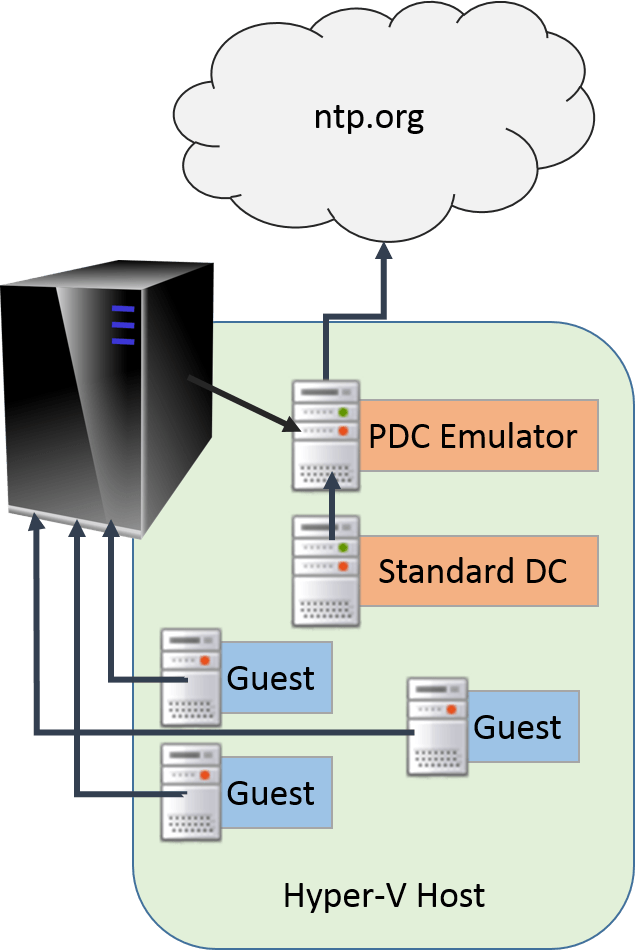 It’s easy to say that you’ll never save your domain controllers; I believe you. But, Hyper-V might decide to save them when you reboot their host(s). If the host is clustered and the virtual domain controller isn’t, you can almost guarantee that’s exactly what will happen. This is not meant to scare you or talk you out of virtualizing domain controllers. It’s just something you need to be aware of. If this is all set up correctly and you notice your clocks losing time, you just do what you would have done in the physical world: check the PDC emulator.

I performed a substantial amount of testing on all of these claims prior to and during the crafting of this article. However, the Windows Time service has a track record of occasionally displaying erratic behavior. It is possible that some of my findings are not entirely accurate. It is also possible that my findings are 100% accurate but that not everyone will be able to duplicate them with 100% precision. If working with any time sensitive servers or applications, always take the time to verify that everything is working as expected.

If you encounter results that are different to mine, let me know by leaving a comment below!

23273 thoughts on "How to Get Hyper-V Time Synchronization Right"