What is Hyper-V Replica and how does replication work?

A critical, but often neglected, component of data protection is disaster recovery (DR). DR is confusing, can be expensive, and, in the absence of a real or perceived threat, can be disregarded as needless overhead. Many businesses that suffer complete data loss do not recover, but very few businesses ever suffer complete data loss in the first place. Hyper-V Replica addresses the complexity and expense component of DR; the remaining challenge for IT is to overcome any perceptual barriers.

The Scope and Purpose of Hyper-V Replica

Unfortunately, many do not completely understand what Hyper-V Replica (HVR) is best suited for and, consequently, use it inappropriately or skip it entirely when it could be useful. Take a few moments to think about what it can really do and what would issues would best be solved with another tool.

Remember that Hyper-V Replica is not a universally-supported technology. For instance, it is not supported to use HVR on any Microsoft Exchange role. Before using HVR with any technology, check its documentation or with support staff.

Replica is for Disaster Recovery

Replica is Not a Replacement for Clustering or Automated Failover

The primary difference between HVR and a failover cluster is that HVR always maintains two distinct copies of the same virtual machine whereas clustering uses only one. Failover Clustering is designed to rapidly relocate a protected resource – in this case, virtual machines – from an unavailable host to an available host. The reason that the source host became unavailable could be something as benign as a reboot operation. Clustering requires a steady, available underlying shared storage mechanism. Replica is designed to allow for rapid recovery of a virtual machine when one or more of the source components are lost with the assumption that a rapid recovery of those components is not possible. It does not require a common storage platform with the source; doing so would largely defeat the purpose of HVR.

Replica is not a Replacement for Backup

For maximum efficacy, backups should be placed on storage that is mobile or remote and can be taken offline. Replica hosts must be connected at all times for HVR to provide its maximum value. Backup must have some rotation capability so that it can maintain multiple copies. HVR does have some multi-copy functionality for its data, but not for the virtual machine components. Backup works best with a fairly long historical chain. Replica works best with a fairly short historical chain.

The primary difference between HVR and backup is that HVR data is potentially live at any time. Backup should be in a read-only state unless it is being overwritten by a new backup. Backup should, ideally, have some rotation methodology in which at least two distinct, unrelated copies exist. Replica can do something similar by specifying a second target for the same replica – this is called Extended Replica. However, this secondary replica is also always ready to be brought online at any time and is therefore susceptible to the same sorts of occurrences as the primary. These include storage failure, corruption transmitted from the source, data tampering, and other issues that do not impact offline media.

Replica does not Replace Checkpoints

Checkpoints are a useful feature that were initially intended to allow for rapid rollback of a virtual machine’s state. After some evolution of the technology, it also allows for a virtual machine to be exported even if it is running, allowing for complete duplicates to be made on demand.

There are several distinctions to be made between checkpoints and replica.

These two technologies are radically different in function and purpose and cannot be used interchangeably.

Hyper-V Replica is not Universally Applicable

In general, I would say that any application with its own replication abilities will not benefit from Hyper-V Replica.

To effectively work with HVR, it’s necessary to have an understanding of its basic flow. The following high-level overviews cover the basic processes.

The following steps illustrate how replica is configured and operates when all is well. 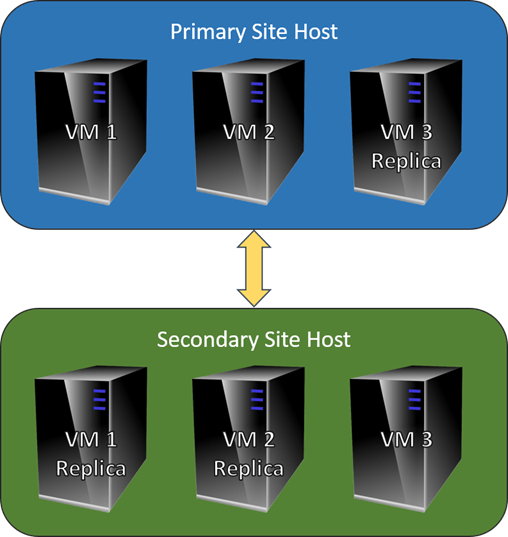 The following steps provide a simplified description of a failover event.

Hyper-V Replica is a very adaptable technology with many possible configurations. You can use it in a low security one-to-one layout or in a complicated many-to-many cluster setup. Microsoft provides very clear documentation on building up an HVR environment from the planning phase through to the maintenance phase, including testing. It includes advanced coverage such as clustering and certificates. Read more on this TechNet article.

There are some topics not fully covered by their documentation. A few of these items:

Despite its complexity, replica is a fairly straightforward technology. Once you have it going, it should be more or less maintenance free. You do need to remember to periodically test a failover and failback as demonstrated in the Microsoft article, but other than that it should more or less take care of itself.

Ready to dive deeper into Hyper-V Replica? Here’s what’s available around the topic on our blog: