Hyper-V Manager – What it is and How it Works

In the previous section, you learned how to install Hyper-V as a server component to operate virtual machines. The subsequent article on preparing Hyper-V for remote management explained how to configure it to accept management connections and how to download the necessary tools, but did not show you how to use those tools. This section will cover the most common tool used for this purpose: Hyper-V Manager.

In this article, you’ll be introduced to the Hyper-V Manager product and learn how to use some of its most basic components and features.

Hyper-V Manager is the most common tool used to interact with Hyper-V. It has these primary features:

Hyper-V Manager is simplistic enough to learn quickly but powerful enough to be the primary management application for small deployments. Even deployments that utilize System Center Virtual Machine Manager (SCVMM) can find uses for Hyper-V Manager.

Hyper-V Manager is smart enough to realize when a Hyper-V host is clustered and when virtual machine is configured as a failover cluster role. It does not have any capability of managing the cluster. It will also not perform some operations on clustered virtual machines, such as modifications to virtual hard disks. For these activities, refer to section 4.

Microsoft provides a comprehensive datacenter management suite called System Manager. One of the applications in this suite is Virtual Machine Manager (VMM). Hyper-V Manager and VMM can both be used to manage Hyper-V hosts, and they can co-exist. The following list highlights some of the differences between these two tools:

As a general rule of thumb, Hyper-V Manager is the tool of choice for small and medium businesses whereas VMM is more attractive to larger enterprises.

Hyper-V Manager must be run from within a fully licensed copy of Windows, but is otherwise free of charge. It is available for the Professional and Enterprise editions of desktop Windows, but it must be downloaded. Hyper-V Manager is a built-in feature for all editions of Windows Server. It is a Microsoft Management Console Snap-In (.msc file) used by mmc.exe (Microsoft Management Console). MMC relies on components of Windows Explorer, so it can only be used in GUI mode. Otherwise, Hyper-V Manager does not have any particular software or hardware requirements.

The most important thing to keep in mind is that Hyper-V Manager is best paired with the same version of Hyper-V that it’s going to manage. The matrix for currently-supported versions is:

Download and installation instructions for Hyper-V Manager are available in an earlier article in this series entitled “How to set up Hyper-V for Remote Management” under the section Using MMC Consoles to Manage Hyper-V.

Once you’ve got the tool installed, you’ll find it under the “Administrative Tools” menu selection on the Start Menu. 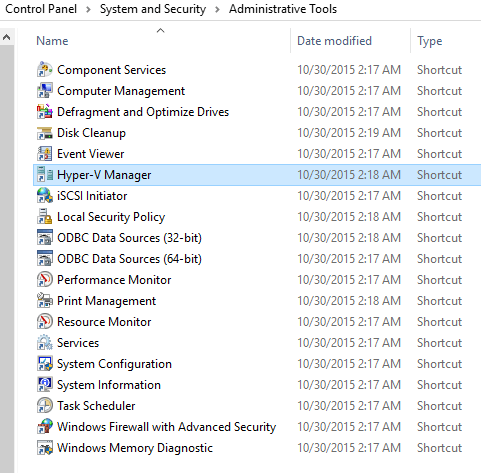 You will then be prompted for the necessary credentials.

In the subsequent articles in this series you will learn how to use Hyper-V Manager: