Windows 8 introduced the first incarnation of Hyper-V for the desktop. It’s the same core hypervisor as the Hyper-V that ships with the server SKUs, minus a few features. Like its big brother on the server side, Windows 10 brings several new features to the desktop.

What is Client Hyper-V?

Client Hyper-V is an edition of Hyper-V that is geared toward desktop environments that could be thought of as “Hyper-V Lite”. It shares most of Hyper-V’s features and even brings some of its own. Highlights:

What Features does Client Hyper-V Lack in Comparison to Hyper-V?

Most of the features that are “missing” in Client Hyper-V are not especially useful in a desktop-oriented hypervisor environment anyway.

We’ve produced extensive work around licensing and Hyper-V with articles, eBooks, and webinars. None of them have meaningfully touched on Client Hyper-V. Simply put, a Windows 10 license provides for exactly one instance, period. It does not contain any guest instance rights whatsoever. If you want to run a guest instance of Windows 10, then you must purchase another license to cover that instance. If you wish to run any Windows Server guests on Windows 10, you must license the hardware to cover those instances in accordance with the new per-core rules. Linux distributions will follow their distributors’ rules.

The benefits of server virtualization are quite clear. They generally center around the fact that server hardware is typically underutilized. That’s usually not the case for client hardware. Desktop and laptop computers don’t usually have as many resources as server computers before you consider cutting them up. CPU is usually the only resource with significant capacity to spare, and even that doesn’t have much availability for some users. So, why would you want to split up limited resources on your desktop system? Here are a few reasons:

You can quickly and easily verify if you can run Hyper-V on your current system by opening an elevated command or PowerShell prompt and running systeminfo . Look toward the end of the output for the following section:

Client Hyper-V ships as a Windows 10 component, so you don’t “install” it, per se. You enable it.

Fewer steps are required to enable Client Hyper-V in PowerShell. In an elevated prompt:

If you’re looking to install a subset of the components from within PowerShell, our earlier article has greater detail.

I want to reiterate that, as a type 1 hypervisor, Client Hyper-V is always running. You do not need to start the hypervisor and there is no service that you can go look at or start or stop. There is the Hyper-V Virtual Machine Management service (VMMS.exe), but, as its name explicitly states, it is a management service. Without it, you as the administrator cannot interact with Client Hyper-V, but it is still there and doing its job.

There are three built-in tools that you’ll use to interact with Client Hyper-V:

It’s worth reiterating that you must always interact with Hyper-V using elevated prompts or graphical applications opened with Run As Administrator. VMConnect is kind enough to tell you when you don’t have sufficient permissions, but most other tools will be silent. For instance, running Get-VM as a non-administrator will simply return nothing, even when virtual machines are present and operational. Hyper-V Manager’s virtual machine list will also be empty.

I’m not going to take you through every option available for Client Hyper-V, but I’m going to touch on the biggest points. Client Hyper-V works perfectly well immediately after you enable it and reboot, so it’s really just a matter of putting a few final touches on it.

To get started, open up Hyper-V Manager. In Windows versions past, you could simply open the Start menu and start typing “Hyper-V Manager” and after a few keystrokes, the built-in search tool would find it. This still works for most people, but many have encountered a bug where Cortana struggles to find things on the local computer. That went away for me after a few updates but the suggestions that I found to fix it directly did not work for me. If you find the “Windows Administrative Tools” group in the Start menu, Hyper-V Manager is there. I suggest pinning it to the Start menu or something similar so that you can easily reach it later.

Once you have Hyper-V Manager open, it should already have your local computer selected. Right-click on it and click Hyper-V Settings. If that option isn’t available, you didn’t Run as administrator.

A screenshot of the window that you’ll see is below. I’ve changed it to the Physical GPU tab so that you can see that RemoteFX is functioning and has automatically selected the video adapter. Sift through the other tabs and check that items are set as you expect. Feel free to change things as suit your needs. I would recommend keeping Enhanced Session Mode enabled everywhere you find it, or you’ll lose some host/guest interaction capabilities with your virtual machines. If you’re not certain about a setting, the best thing to do is leave it alone.

Once you’re finished there, right-click on the local computer again and click Virtual Switch Manager. Make certain that, on the right side, the selected type is External and click Create Virtual Switch. 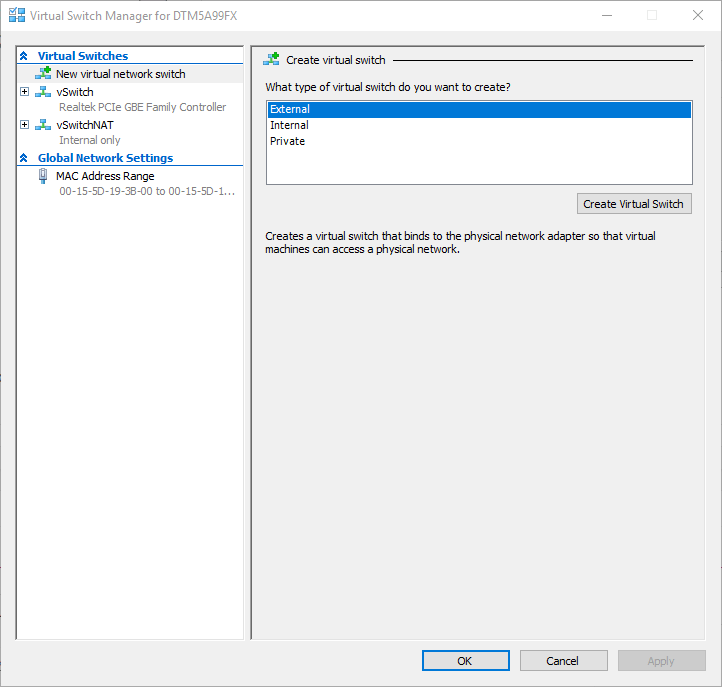 Set the following options on the new virtual switch page: 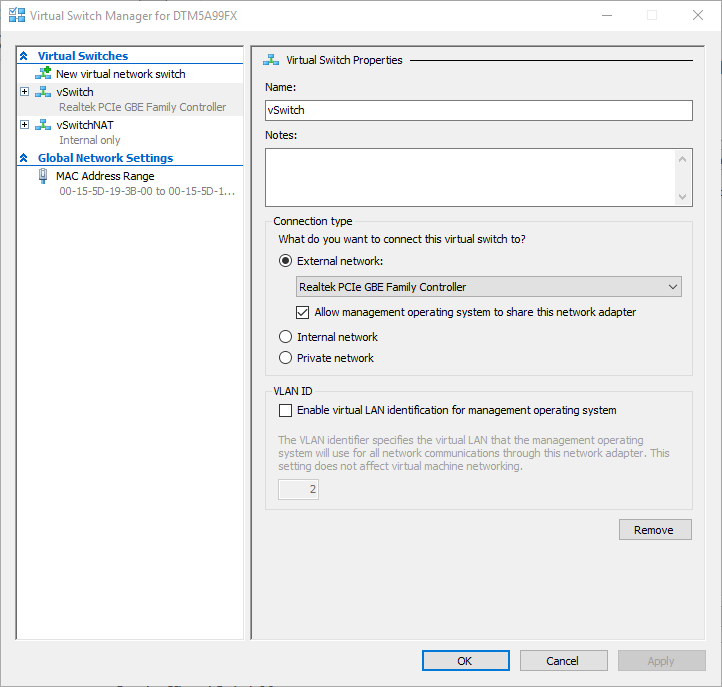 When you’re done with setting up the virtual switch and you OK out, you might lose connectivity for a few moments while the networking settles down. It needs to recreate your networking stack on a new virtual adapter, so expect that to take a bit of time.

If you connected to a wireless network adapter, you might face some difficulties. You wouldn’t be the first. I do not personally have much expertise in addressing these problems but your odds of finding suitable resolution are not great. Usually, it either works in the beginning or it never works at all. You can try updating drivers. If you just can’t get it to work, never fear! You can follow the steps in the next section to create a NAT network so that you don’t need a virtual switch on top of the physical adapter.

This process has changed several times since the feature was introduced in a technical preview of Client Hyper-V and a lot of the currently available instructions are wrong. Even Get-Help for New-VMSwitch shows options that don’t work. The following instructions were tested and known good for Client Hyper-V on Windows 10 build 14393.447 (run “winver” from the Start menu).

As with many things in Windows, there is more than one way to make this all happen. There is only a single step that absolutely requires PowerShell, which means that I’m going to counsel you to do the whole thing in PowerShell. You can do all the other steps in the GUI if you prefer. So, I’ll start with a basic outline of the steps, then I’ll show you the PowerShell that can make it happen:

Be mindful of step 6. Client Hyper-V does not contain a DHCP server and will not distribute addresses for that NAT network. In case you were about to ask, no, Client Hyper-V does not support DHCP relay, either. You must either create a virtual machine running DHCP in that network or you must manually assign IPs. I’d go with the latter.

The first line creates an internal virtual switch named “vSwitchNAT” (could be done in Hyper-V Manager, as you saw above). An internal switch allows the host operating system and guest operating systems to use the same virtual switch, which, by definition, means that a virtual adapter will be automatically created for the management operating system. When such a virtual adapter is automatically created, its name is always in the format of vEthernet (name of the virtual switch), so I know that this one will be named “vEthernet (vSwitchNAT)”. If you name your virtual switch differently, use that name on your second line. I have also decided to pick the first valid IP in the network that I created, hence the 192.168.100.1 (this could be done in network connections). Note that I do not give it any routing information, such as a default gateway. The third line creates the NAT network. It will see the adapter with IP 192.168.100.1 and automatically treat it is as the router for that network. 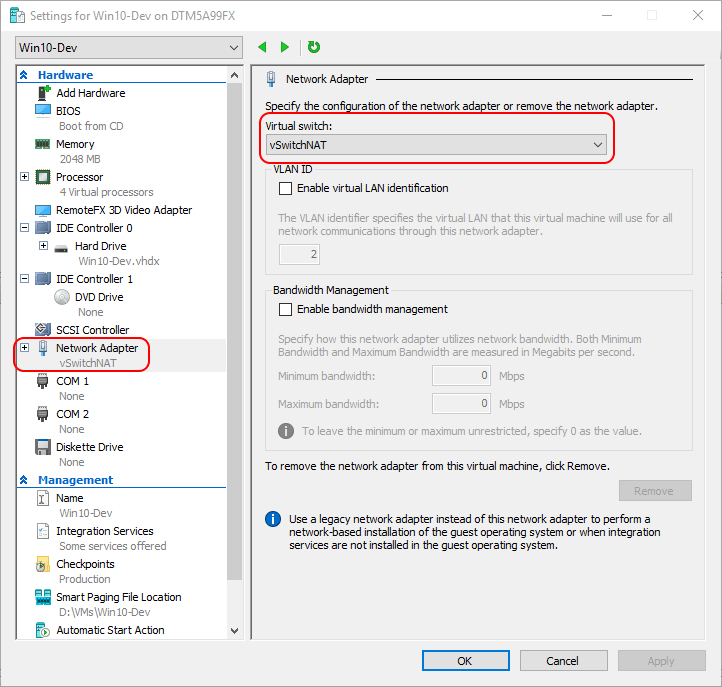 I finish up by accessing the guest’s networking and giving it an IP on that network and using the host management adapter as the default gateway: 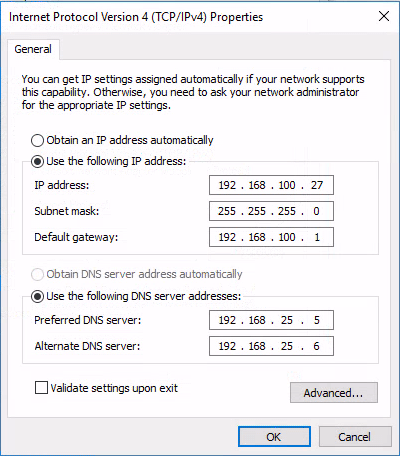 NAT in Windows 10 has more capability than what I’ve shown you, but this should be enough for most. Start on the NAT PowerShell page for more information.

There are a great many other things that I could show you, much more than would fit in a simple blog post. If this is your first time using Client Hyper-V, or any Hyper-V, spend some time kicking the tires. Begin by right-clicking your host in Hyper-V Manager and clicking New and Virtual Machine. The wizard should be easy enough to follow. Once your new VM is created, right-click on it and click Connect. That’s VMConnect. You’ll find the start and stop controls. You’re now on your way to being a Client Hyper-V guru!