Microsoft’s Active Directory technology enables system administrators to group large numbers of computers together inside security boundaries. The directory holds a potentially vast amount of information on users, computers, and all other types of objects. Any object with proper security rights can query the directory and retrieve information. This directory allows for single-sign-on, easily controlled access to resources, software deployment, group policy management, and many other benefits over the older workgroup model. The directory’s layout, called the “schema”, can even be extended to hold other data types so that third party software can utilize the repository as well. Management of Active Directory requires a special type of server called a domain controller. This server is responsible for handling queries and keeping the directory up-to-date. Microsoft had domain controllers in earlier versions of Windows Server, but with the introduction of Active Directory in Windows 2000, domain controllers ceased working under the single-master/multiple-slave model and began operating under a multi-master model. This means that in a domain with multiple domain controllers, objects can be changed on any domain controller. Changes are periodically synchronized between domain controllers using active directory replication technology.

Most of the intricacies and details of the multi-master Active Directory operation are well beyond the scope of this article, but some explanation is necessary to understand the special challenges domain controllers pose for both backup and restore operations. Every domain controller is considered “authoritative”; that means it can make changes to the directory without gaining consent from the others or having a centralized domain controller handle update operations. To do this, each domain controller stores a local copy of the directory and controls updates to it. To keep track of changes, Active Directory assigns an Update Sequence Number (USN) to every attribute for every object that it is tracking. These aren’t easily viewable, but some USN-related attributes can be seen in the ADSI Edit screenshot below: 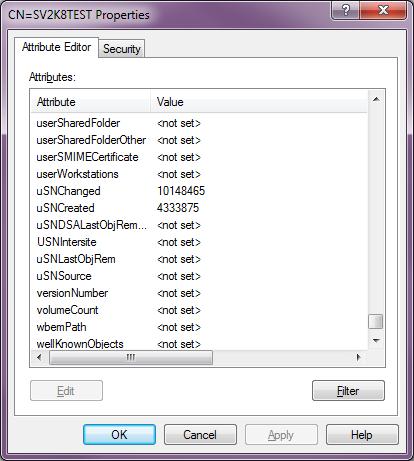 With the multi-master model, all domain controllers are considered “authoritative”. With the exception of a handful of operations, no single domain controller is ever “in charge”. So, if problems occur in the directory, there isn’t a simplistic way for domain controllers to “work it out amongst themselves”. In most cases, there won’t be a problem, but virtualization adds some potential issues. When Active Directory was first introduced, no one was virtualizing anything. The biggest uncontrolled threat to Active Directory was a system crash. Microsoft built in a mechanism so that if a domain controller crashes, when it comes back up, it essentially reaches out to all the other domain controllers and says, “I was out for a bit, what did I miss?” Replication is not hindered. However, a virtualized domain controller can be paused or suspended for an indefinite length of time. When it comes back, the only thing it’s going to know is that its clock has changed. This has the potential to behave exactly like restoring an old copy of Active Directory into a functioning forest. This condition is discussed in the “Challenges of Domain Controller Restores” section.

Running a traditional-style backup that specifically triggers the VSS writer to operate on the System State of a domain controller ensures that Active Directory knows it’s been backed up and therefore the consistency of the Active Directory database is guaranteed.  Backing up the virtual machine from the host level using a method that does not trigger the guest’s VSS writer does not result in a state that’s guaranteed to be accurate. More details are given in the “Challenges of Domain Controller Restores” section.

How to Approach Virtualized Domain Controller Backup and Restore

The most important thing is to select a backup application that is Active Directory-aware. Not all programs are marketed this way; if your application is VSS-aware and can specifically back up the System State of a Windows machine, it should work. Because this article specifically has Hyper-V guest machines in mind, then the application must be able to work with Hyper-V’s VSS writer so that it can communicate with the guest’s VSS writer. Also, in the virtual machine’s property dialog, on the Integration Services tab, the “Backup” integration component must be enabled. If all of these requirements are not met, then Hyper-V will pause the domain controller while it is being backed up. If that domain controller is ever restored, you run the risk of being in a USN rollback condition.

How to Verify Your Software is Active Directory-Aware

After a backup, check the domain controller’s event logs. Look under “Applications and Services”->”Directory Services” for Event ID 1917. If you find it, this is an absolute guarantee that your software is properly triggering the VSS writer. However, some applications still take a consistent backup of Active Directory without generating this event, as long as they trigger the VSS writer. Ensure that your application is set to at least take a System State backup and use the VSS writer, then look in the “Application” log for several Event 2001 and Event 2003 entries generated by ESENT. If there are no associated errors, then your directory is being safely backed up.

I Only Have One Domain Controller. How Does this Affect Me?

Can’t I Just Never Back Up and Instead Rely on Multiple Domain Controllers?

If your domain controllers are split across multiple physically separate sites and replication is reliable and consistent, there is a temptation to just not back them up. You should be protected from most environmental and physical disasters. However, without a backup, you aren’t protected from human disasters or malice. Always take backups.

I Can Rebuild the Domain with One Restore, so Should I Only Backup One Domain Controller?

You should back up several domain controllers, the more the better. Even though you only need to restore one, you cannot predict the circumstances that will require a restore or if any given backup will be successful and remain uncorrupted until needed. The more backups you have, the more likely you are to have the backup that you want. It is always better to have too many backups than not enough.

The source for much of the research in this article is a piece by Sander Berkouwer at “The things that are better left unspoken”. You can read the original article as well and download a PDF with more detailed explanation of USNs and how they are impacted by backups and restores.