VMware vSphere provides a powerful construct known as the VMware vApp. The VMware vApp helps solve many of the management challenges associated with multi-tier applications spread across many different virtual machines running in the vSphere Datacenter. This post will examine all things vApp related and cover VMware vApp best practices for consideration when implementing vApps in your environment.

To help understand the benefit of the VMware vApp, let’s examine how applications have changed, including the infrastructure architecture. Early application architecture decades ago would house all the requirements for an application on a single server host. In many legacy datacenters from years gone by, you would have a single server that provided the resources for a specific business-critical application. Businesses traditionally named servers based on the application they housed.

As organizations have deployed modern applications in the datacenter, the services and resources required for these applications have grown and expanded. For many applications, it is no longer feasible to house all components on a single server.

In addition to resource requirements, there are other essential reasons to split up applications. One of which is security. Applications that need to be accessible from the Internet will face more significant security risks to the underlying infrastructure. Placing only the infrastructure required to be accessible to the Internet in the DMZ and housing other application components in the internal LAN helps reduce the attack surface. Splitting up application requirements into a multi-tiered approach allows organizations to implement additional security architecture solutions, such as micro-segmentation.

Below is a simple overview diagram of what a classic three-tier application might look like when designing connectivity. 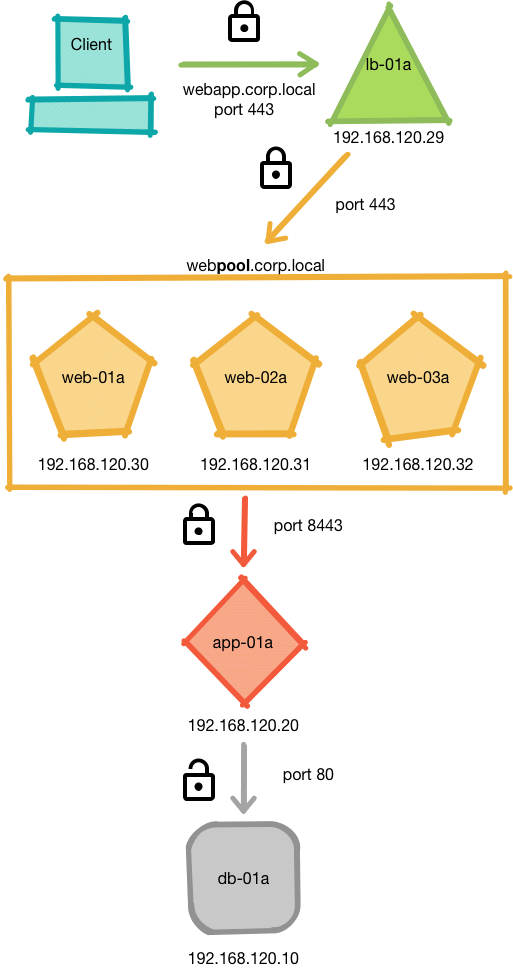 As the simplistic overview above helps visualize, there are no less than five virtual machines that comprise the infrastructure backing the application in this simple configuration for a three-tier app. Managing these five VMs as separate entities, while doable, may likely be problematic for the application.

What is a VMware vApp?

A VMware vApp is a construct found in a vSphere Datacenter that allows much more efficient management of virtual machines that back a specific application. With a VMware vApp, you can manage multiple virtual machines as a single entity. It includes resource management and other management activities such as power operations, snapshots, and others. You can think of a VMware vApp as a container that houses your VMs backing business-critical applications. In essence, you perform operations on the container that houses the VMs, allowing performing the functions in mass for the member VMs.

The VMware vApp can reside on either a standalone host (joined to vCenter) or a vSphere cluster. The requirements to configure a VMware vApp are minimal. However, these are worth noting. What are the requirements?

VMware vApps are especially powerful for environments in managing application virtual machine dependencies. The vApp provides a logical construct that allows vSphere administrators to manage, configure, and provide resources to the underlying virtual machines as a single entity. It offers many management and configuration advantages. What are those?

There are many things the VMware vApp can do for vSphere administrators to make much more efficient and powerful management of VMware virtual machines. These include:

Now that we have a good overview of the basic VMware vApp functionality and use cases, let’s dive into VMware vApp operations and see how to work with it in vSphere operations. Let’s take a look at the following: 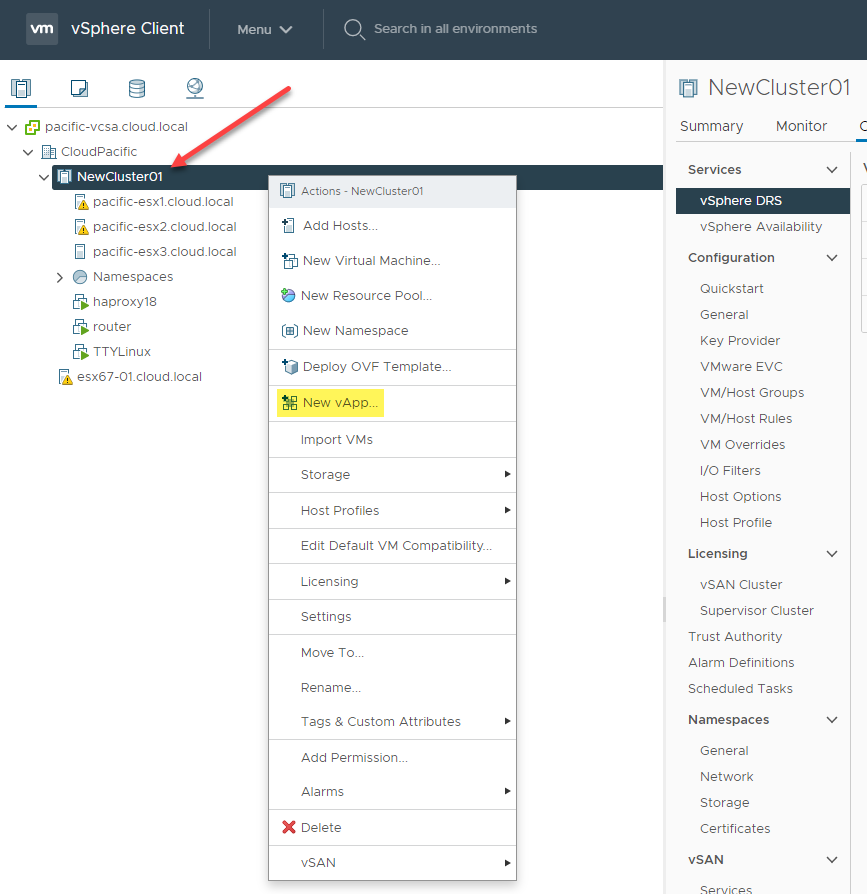 In the Select creation type, the Create a new vApp is selected. 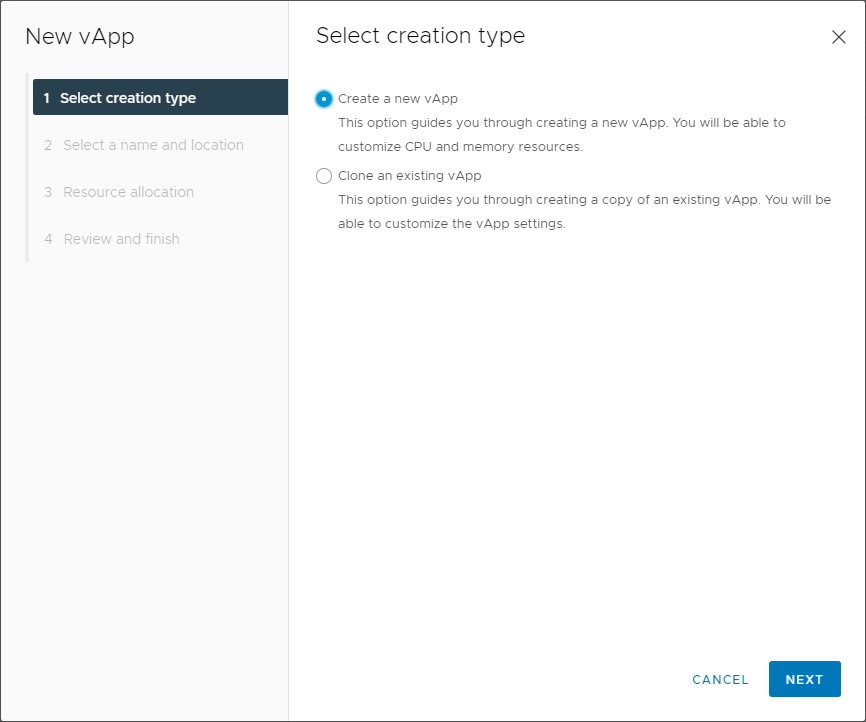 Name the vApp and select the destination folder in the vSphere inventory. 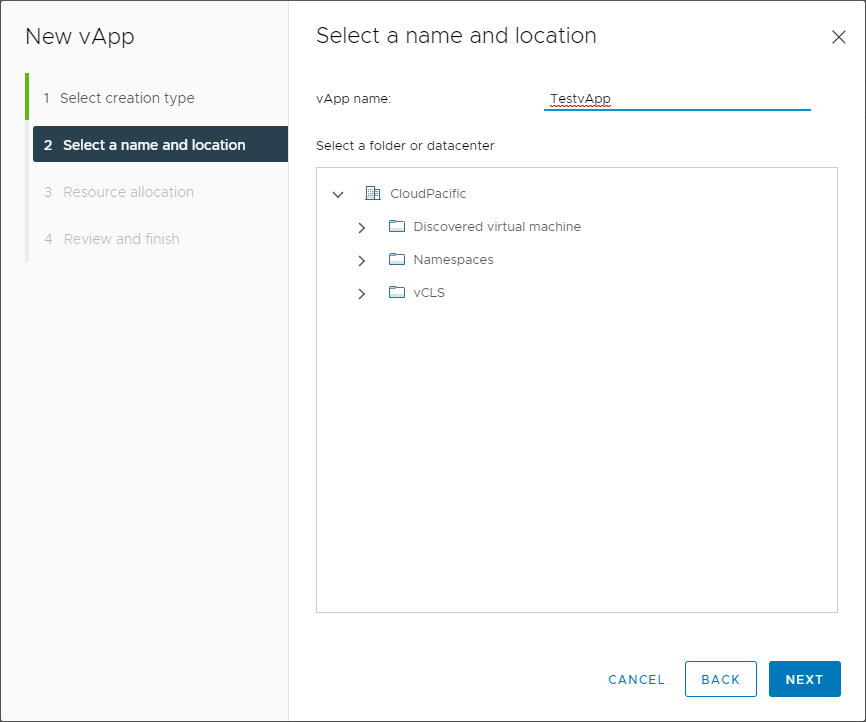 Select the vApp name and location 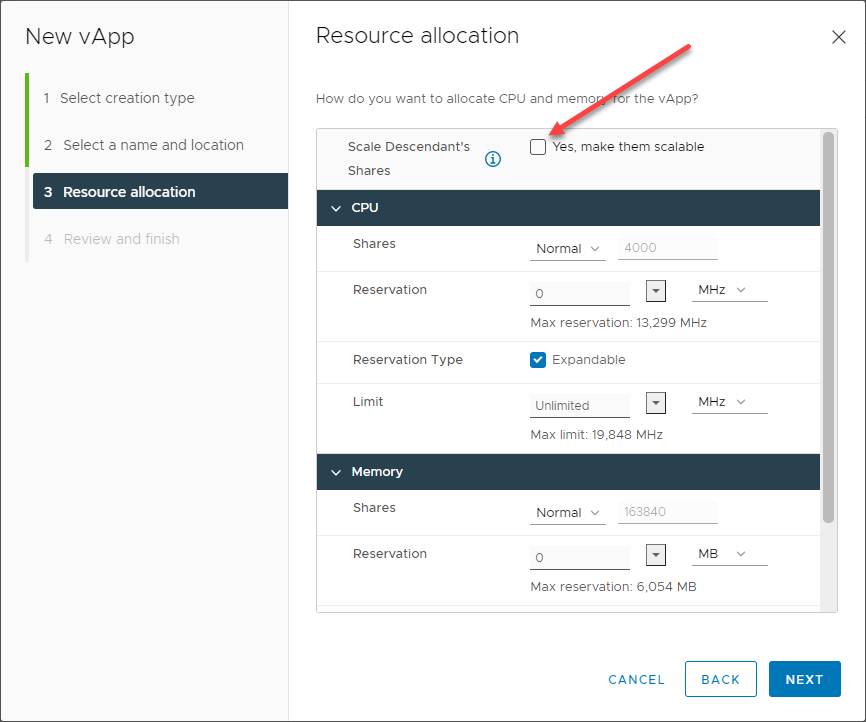 Configuring the resource properties of the VMware vApp

Finally, on the Review and finish step, review the configuration and click Finish to finalize. 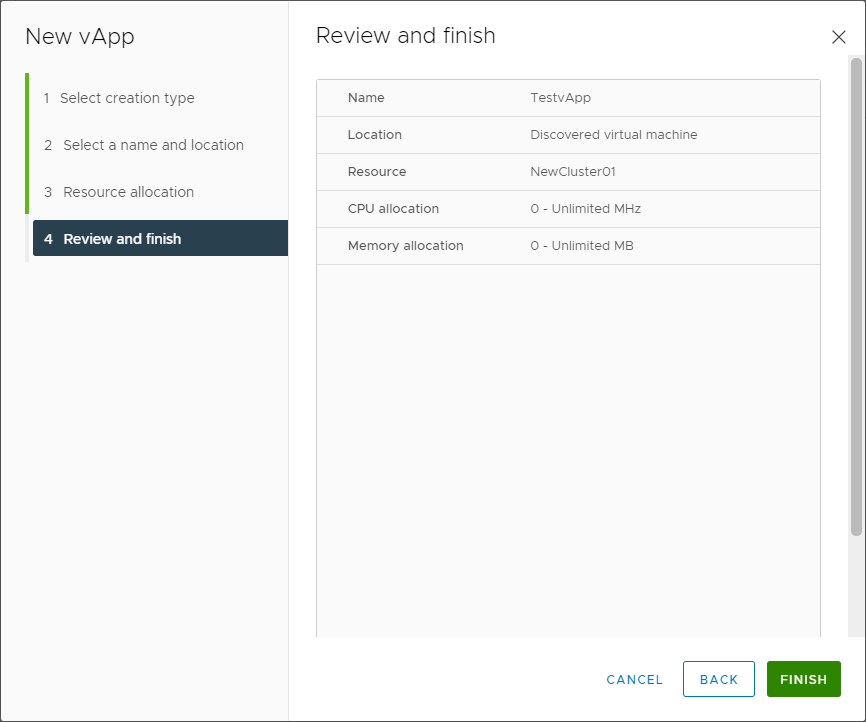 Review and finish the creation of the vApp

Configuring the properties of a VMware vApp

Configuring the properties of a VMware vApp includes many configurable settings. These include the following:

Resources – As shown in the creation of the VMware vApp showing resource configuration, including scalable shares, you can also revisit this after the vApp has been created. The resource settings include CPU shares, reservation, reservation type, CPU limit, and memory shares and reservation.

Viewing the resources configuration for a specific vApp

Start Order – The start order helps to support a business-critical application’s various dependencies by starting virtual machines in the sequence needed for your application. The VMware vApp allows “grouping” VMs and setting the boot order and delay based on these groups. Also, you can configure the shutdown behavior along with the delay. 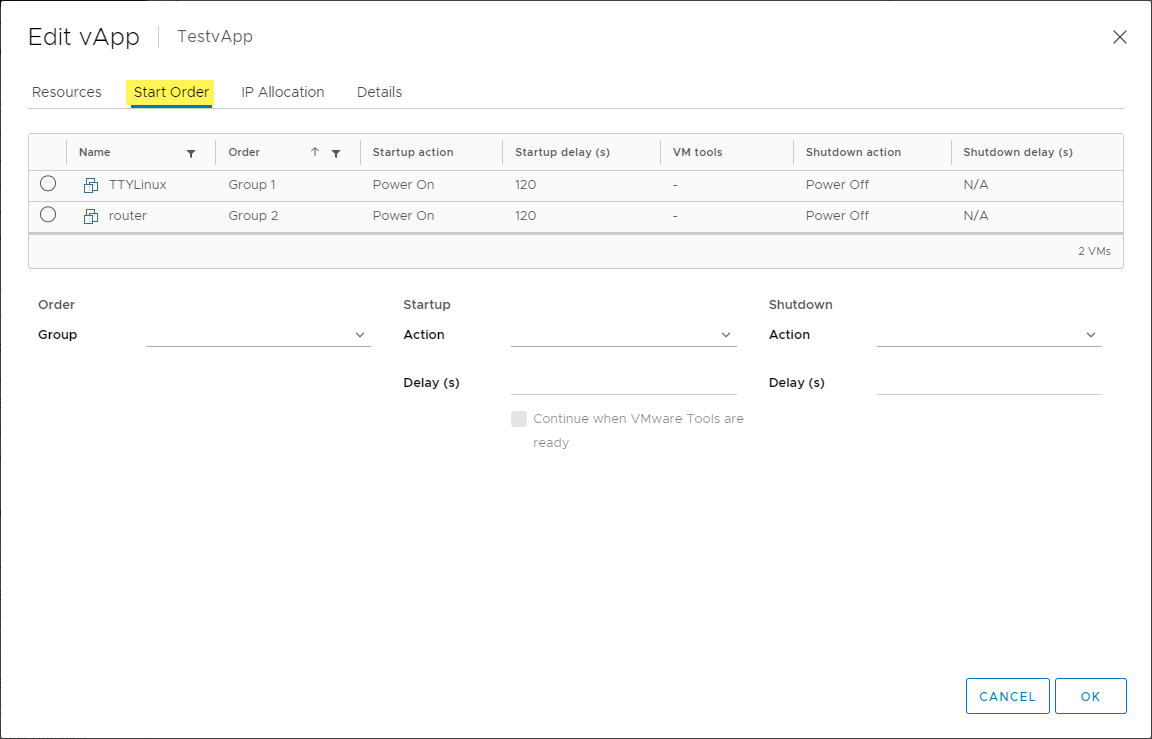 Start order configured in the vApp 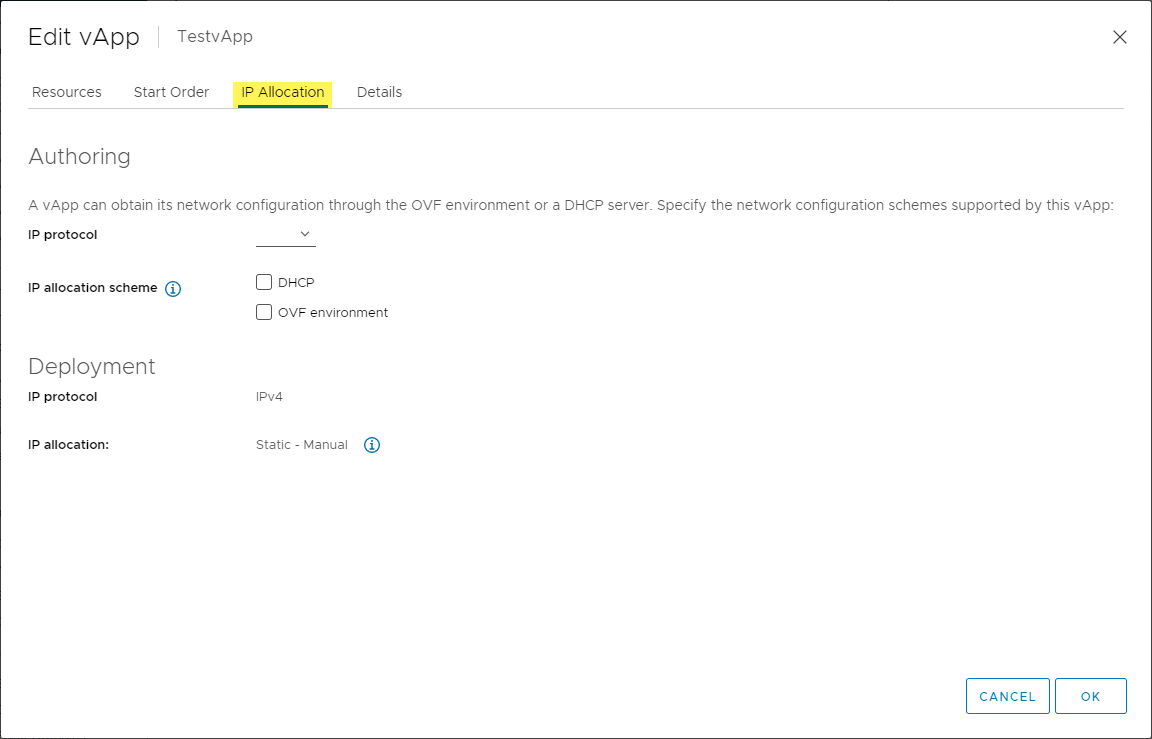 IP Allocation configured in the vApp

Details – Under the details tab, you can configure the name, Product URL, Vendor, and Vendor URL associated with the vApp if it is distributed. 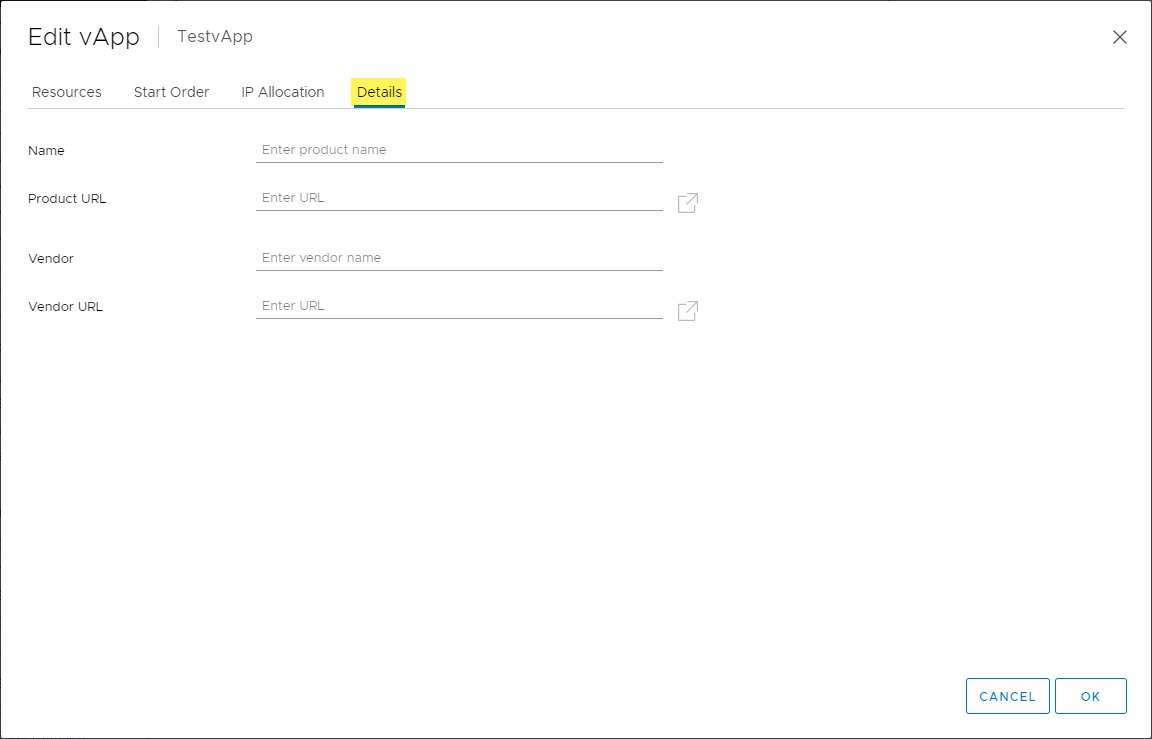 To complement the Start Order configuration as found in the properties of the VMware vApp, you can perform various power operations on your vApp. It makes powering on multiple virtual machines providing resources for an application straightforward. 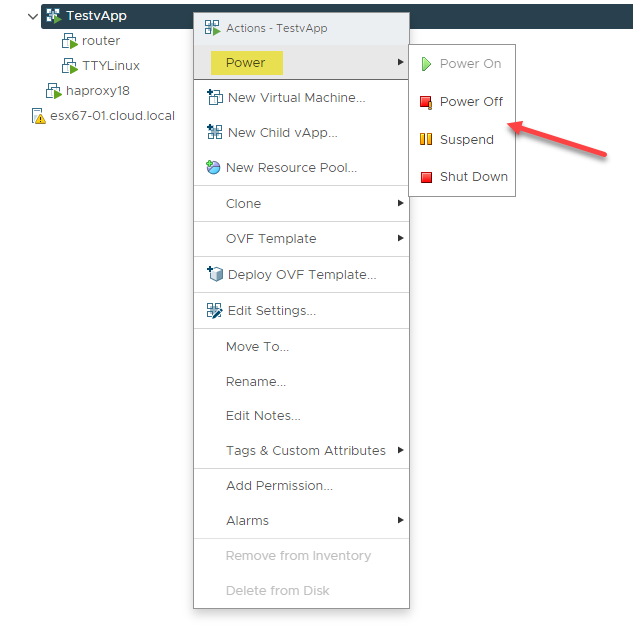 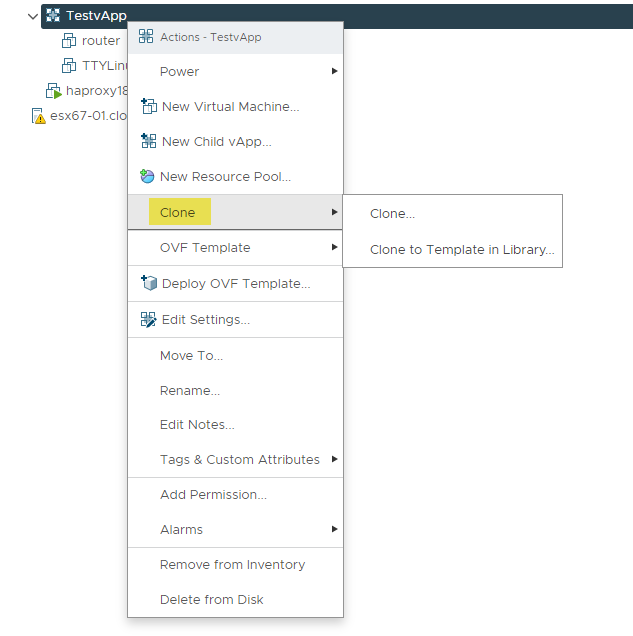 Beginning the process to clone a VMware vApp

When you launch the vApp Clone process, you will notice that the New vApp wizard launches. You essentially interact with the same wizard with the Clone an existing vApp selected by default. 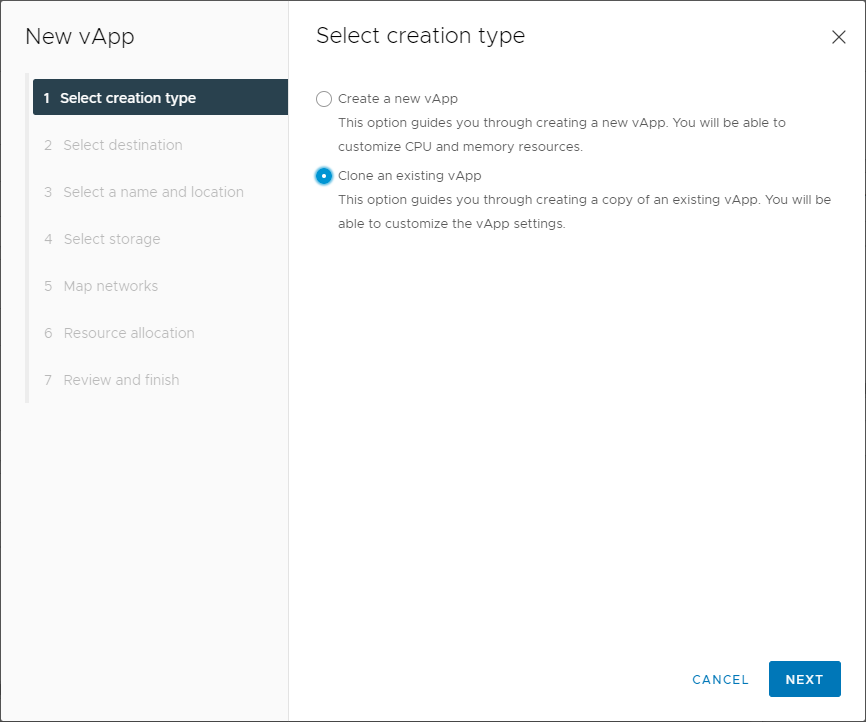 Beginning the process to clone a VMware vApp

Select the ESXi host or vSphere cluster you want to house the cloned vApp. 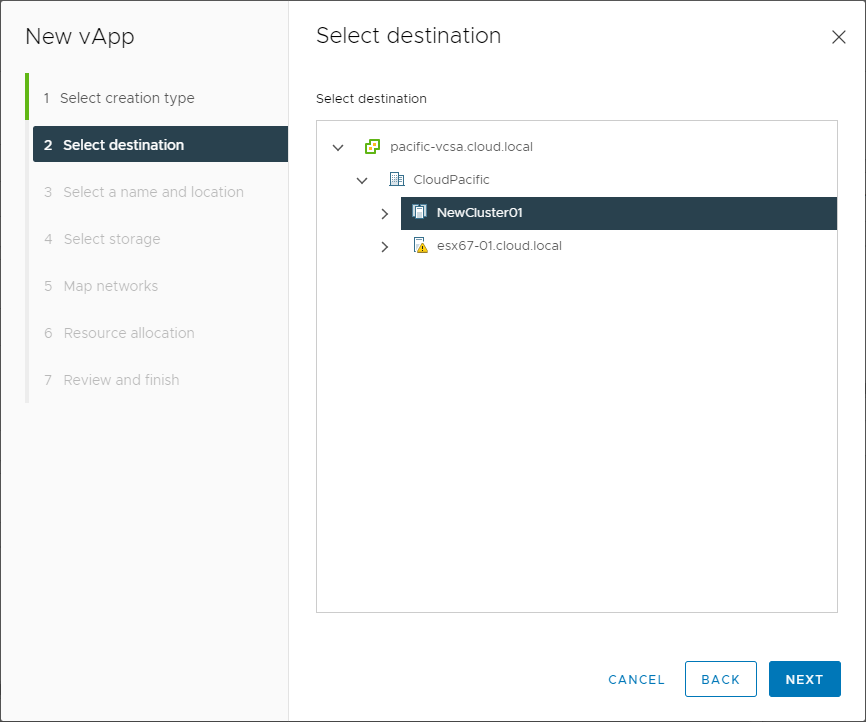 Select the compute resource for the cloned vApp

Select a name for the cloned vApp as well as a folder location in the vSphere inventory. 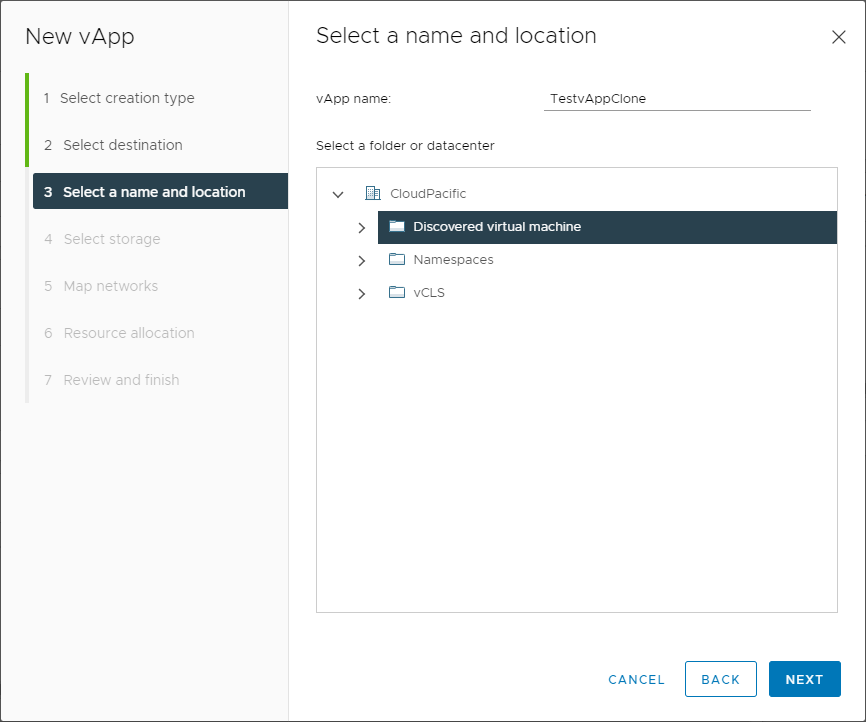 Select a name and location for the cloned vApp

Select the storage datastore to store the vApp virtual machines. 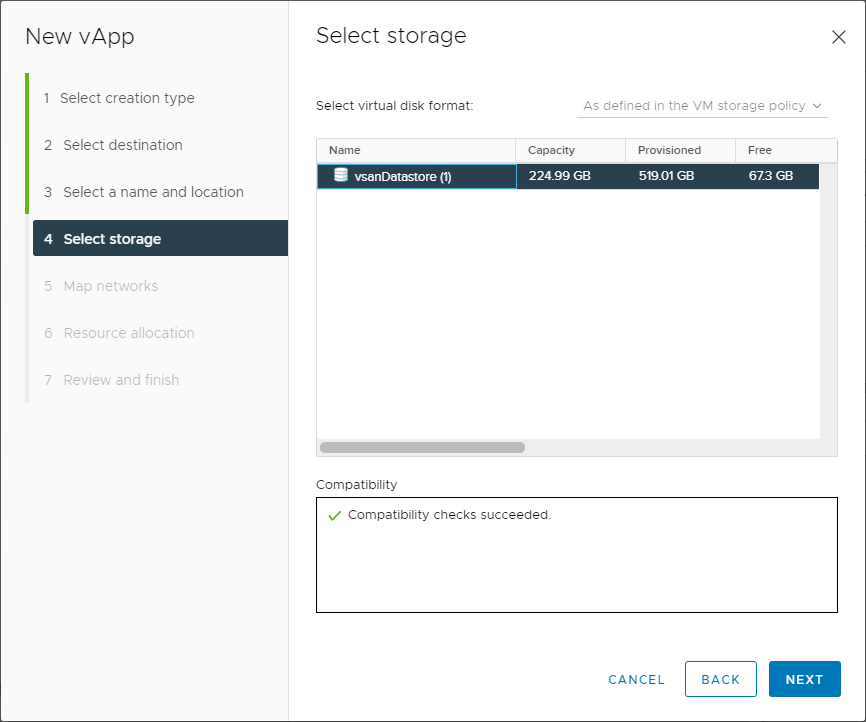 Select storage for the cloned vApp

Map your network connections from the source virtual machines to the target environment networks. 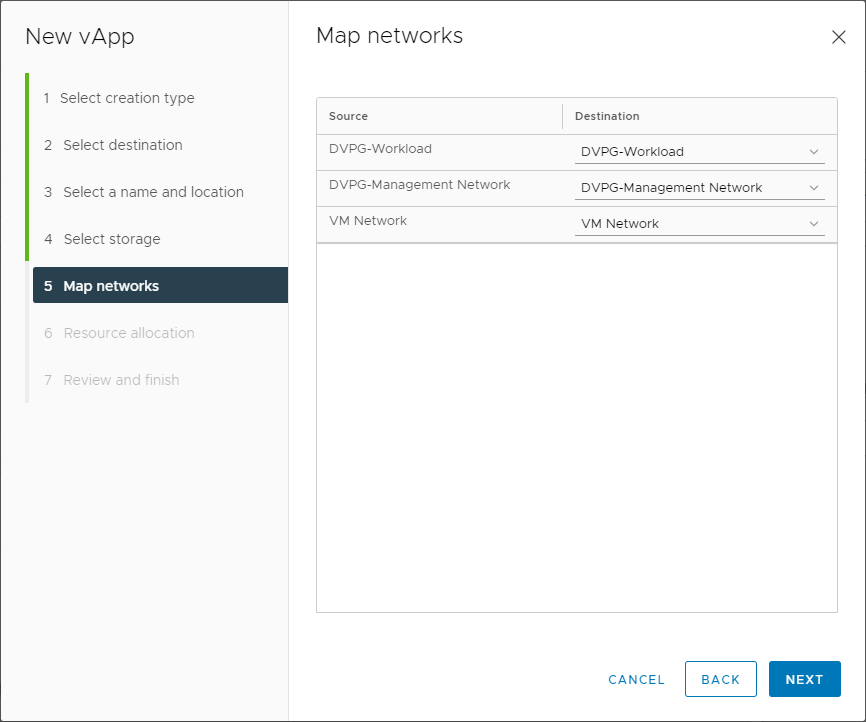 Map the networking for the vApp virtual machines

Configure resource allocations for the cloned vApp. This includes the ability to configure scalable shares.

Configure the resource allocation for the cloned vApp

Review the configuration of the cloned vApp operation. Once you have validated the selections, click Finish to begin the clone process. 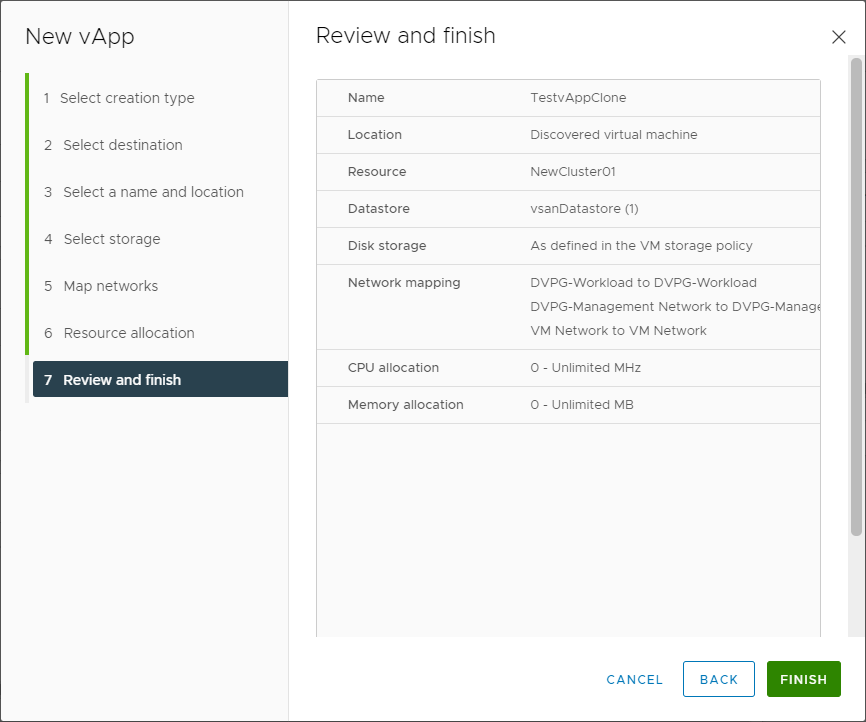 You will see the vApp clone process begin in the vSphere Client.

One of the exciting capabilities of the VMware vApp is the ability to export the vApp as a self-contained OVF file. It makes a vApp extremely portable and easy to move from one environment to another using the normal OVF deployment process. Right-click the vApp and select OVF Template > Export OVF Template on the context menu. 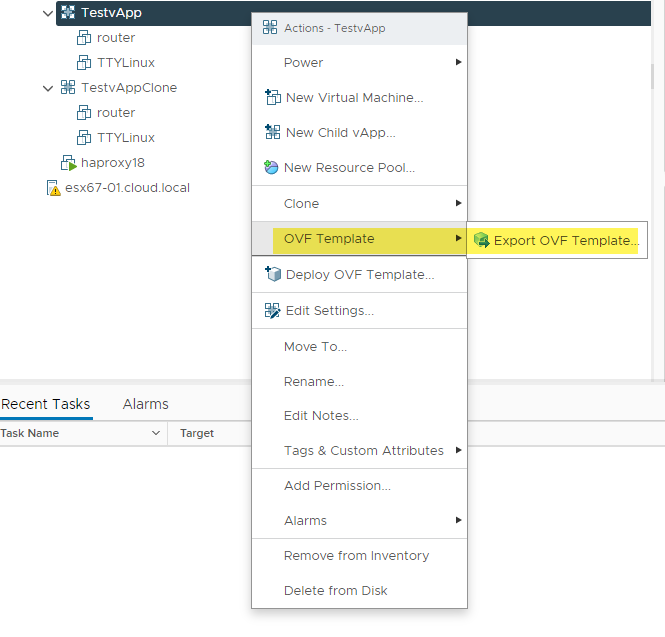 Begin the process to perform an OVF export

The Export OVF Template includes a few settings. Name the vApp and choose Enable advanced options to display other settings related to the BIOS, MAC addresses, and extra configuration. 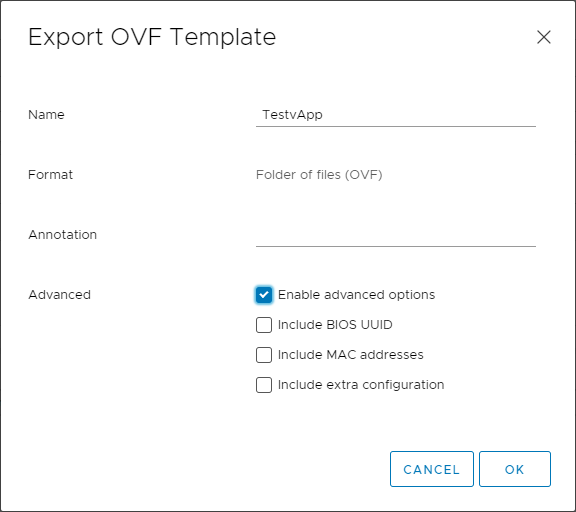 When working with vApps, you can house nested vApps in a parent vApp. If you have subcomponents of a multi-tier application that you want to treat as a single entity, the child vApp provides an easy way to do this. Subsequent virtual machines contained in the child vApp can be controlled by the child vApp management capabilities. The parent operations performed on the objects contained within the vApp, apply to the child vApp.

To create a new child vApp, right-click on the parent vApp and select Create Child vApp. It will launch the identical wizard you see when creating or cloning a new vApp. 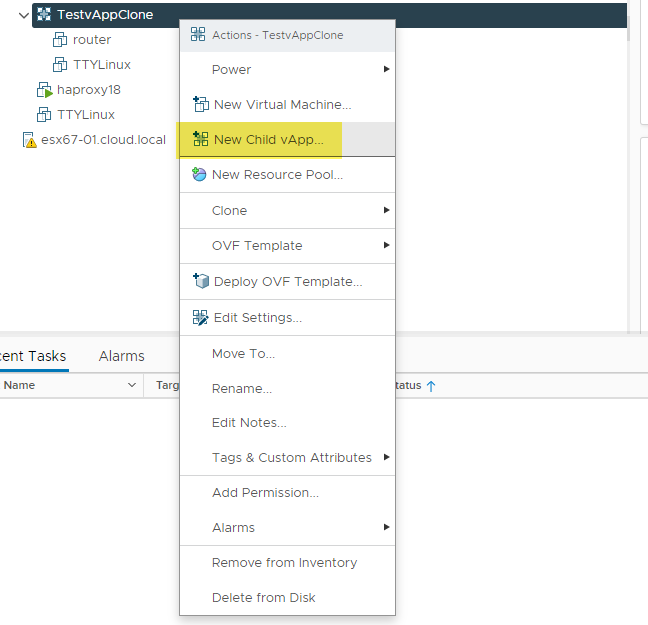 VMware vApps provide an often underutilized construct in VMware vSphere environments. The vApp is especially powerful in the context of multi-tiered applications. It allows encapsulating all of the underlying virtual machines that house application dependencies to configure and manage these as a single entity. It provides a seamless and efficient way to ensure business-critical applications can be managed and deployed using a holistic approach. Take note of the following best practices: 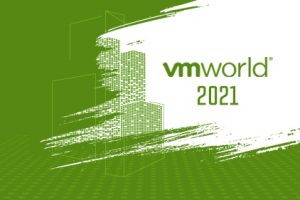 What is the difference between VDI desktop virtualization and virtual machines

NSX-T vs NSX-v: What is the difference?