Migrating to Hyper-V for VMware administrators

This session is geared towards VMware admins who are looking to broaden their horizons by adding Hyper-V know-how to their toolbox. You’ll learn about Hyper-V clustering, management differences, and migrating VMs from ESXi to Hyper-V.

Q: Do Hyper-V and VMware both support GPU intensive VMs?

Yes they do actually. Hyper-V Supports GPU intensive workloads in VMs by leveraging the RemoteFX protocol. VMware allows for GPU heavy workloads via a number of different avenues such as vDGA and vGPU, but there are more than just those two.

Q: If I'm using Azure Site Recovery do I have to pay for X?

I had many questions in the webinar about pricing for Azure Site Recovery from the stand point of using it for migrations. Instead of attempting to answer each one, I'll refer everyone to the recently updated FAQ I found when researching the questions. There is a pricing section to the Q & A that answers many of the common questions. That FAQ can be found HERE.

Q: If I want to try out Hyper-V 2016, what do I need to think about regarding licensing?

You can use either the Free SKU of Hyper-V Server HERE with Linux VMs or existing licensing, or you can go to the Microsoft Evaluation Page and download a 180 Eval copy of the OS.

Q: Does Hyper-V use something similar to EVC in VMware?

It does. Similarly to how clustering works, the CPU compatibility features in Hyper-V are defined on a per-VM basis. In the settings for a given virtual machine, under CPU, you'll see a compatibility checkbox. Enabling this checkbox will allow the VM to be moved to hosts with different CPUs. Keep in mind that like VMware, this does not support VMs moving live between hosts with radically different CPU architecture. For example, from a host with an Intel CPU to a host with an AMD CPU.

Q: Does Hyper-V have something that is akin to the vSphere Distributed Switch?

Yes, via a feature called Logical Switches, but not with Hyper-V by itself. In order to have this capability you need System Center Virtual Machine Manager present in the environment and Logical Switches are managed as part of the network fabric.

Q: Does Hyper-V on the same hardware have the same performance as VMware?

Talk about a loaded question! It's a tough one to answer to be honest. There are so many variables in play. Are the same features enabled? Did a Hyper-V expert setup the Hyper-V stuff? Did a Comparable Vmware Expert setup the Vmware stuff? All things considered and all things being equal, I would consider the performance between the two to be pretty close, but your mileage may vary based on configuration and workload type.

Q: Can you Explain Clustering and the Different Types of Clusters?

We could easily fill an entire webinar on this topic! In short, Microsoft uses Microsoft Failover Clustering to facilitate the same functionality as High Availability in VMware. Clustering will bring up a VM on another host in the event of a host failure. The VM is down for only as long as it takes for the cluster to identify the failure and boot the VM elsewhere. As for the different kind of clusters, there are several. Most related to our webinar is a Hyper-V cluster. All Microsoft Failover Clusters have the same basic design, just different workloads they are protecting. You can get tons of information on clustering HERE.

Q: Will Microsoft Ever Consolidate all the Various Hyper-V Management tools into one Package?

Unknown at this time. There is currently no roadmap to move away from the existing Hyper-V management tools.

Q: In your experience are there any huge "gotchas" that you need to look out for in moving from VMware to Hyper-V

I think the biggest thing that people get hung up on are management tools and System Center VMM. Most people coming from VMware assume that SCVMM is the same as vCenter and that it's needed for HA and Live Migrations, which isn't the case. Therefore they go and spend way more money than they really need for a deployment. Additionally, the disparate management tools throw people off, which is why I spent quite a bit of time talking about it in the webinar. Finally, I highly recommend a strong understanding of Microsoft Failover Clustering, as there are some nuances and differences from vSphere, such as Active Directory considerations...etc...etc. More info on Failover Clustering can be found HERE.

Q: Will the Migration Process bring over the required VLANs as well?

As VLANs are part of your networking and host infrastructure, they will not be brought over as part of the migration process. During the migration process you're only grabbing the VMs. What you'll want to do for a quick transition is setup the relevant VLANs on the Hyper-V side first prior to moving the VM.  One of our bloggers, Eric Siron, actually did a great series on Hyper-V networking, which included a section on VLANs in Hyper-V HERE. 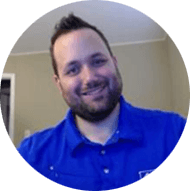