One of the benefits of virtualized systems is the portability of the guest machines. At their core, they are nothing more than a collection of files. What the guest machines believe to be their “hard drives” are actually .VHD files. Their “hardware components” are determined by a list stored in an XML file. At this time, the files can’t simply be copied from one point to another without some fairly involved work, but the “Export” command can be used to prepare the VM and copy its data to another location. This also provides a rudimentary form of backup. 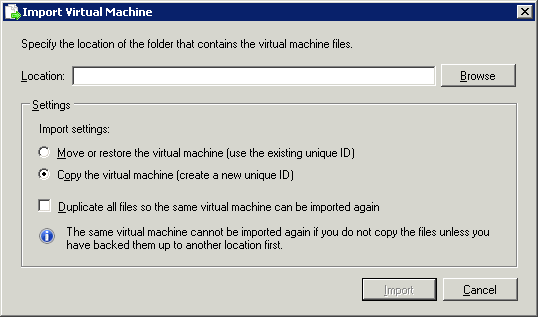 To download a free PowerShell script to automate exports of Hyper-V VMs then please check out this blog article – http://www.altaro.com/blog/free-download-powershell-script-for-hyper-v-export/

The Drawbacks of Export as Backup

There are really only a few places in which the Export function makes sense to use a backup solution. If your budget is extremely tight, Exports can be made to work, but should be considered a temporary solution at most. If you can get by with a “Gold Master” exported image that only rarely needs to be updated, Export is a viable option. For all other situations, use an actual backup solution.

Is Export All Bad?

Export isn’t a bad tool; it just isn’t robust enough to be the best solution for backup. Since it has no grand interface, it can be the fastest way to make a one-off copy of a virtual machine – a scenario which is often perfect for a development or test environment. Export also has the ability to export a snapshot as an entire VM, so testing environments can be copied and distributed fairly rapidly. However, facilities that don’t perform development or detailed testing won’t gain nearly as much purpose out of them and should strongly consider utilizing a proper backup solution.

To download a free PowerShell script to automate exports of Hyper-V VMs then please check out this blog article – http://www.altaro.com/blog/free-download-powershell-script-for-hyper-v-export/
Was this helpful?
Yes
No